Book Review - The Stories They Tell 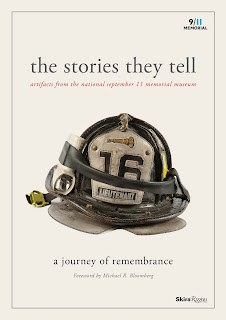 Scheduled for release tomorrow in both hardcover and paperback formats, The Stories They Tell contains 160 pages and 150 color photographs detailing one of the most unimaginable events in history – 9/11.  This important book presents the first look into the collections and exhibits of the National September 11 Memorial & Museum.  The horrific events of 9/11 are chronicled along with a spectacular array of artifacts that range from memorials placed around Ground Zero to actual Twin Towers objects to the personal property of both victims and survivors. 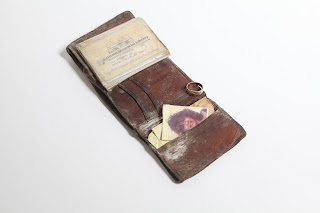 The book begins with 9/11’s timeline of events beginning at 7:59 a.m. when American Airlines Flight 11 takes off from Boston and ending with President Bush addressing the nation at 8:30 p.m.   The Archaeology chapter covers some of the background of the Twin Towers and how they were originally conceived and constructed.  You will learn why the Tridents were so important to the structural support of the buildings and how they became instant symbols of defiance and resilience after the attacks.  Because the World Trade Center was going to be built so close to the Hudson River, a special slurry wall and box columns had to be constructed.  After the attacks they became foundations for the future.  Remnants of steel that were salvaged after the attacks also tell a compelling story.  You will learn how officials determined where 2 pieces of steel salvaged from the field of debris were originally located in the North Tower and how computer simulations and scientific analysis determined the reason for the towers ultimately collapsing.  Many people fleeing the World Trade Center used the Vesey Street Stairs as their escape route.  These stairs provided a bone chilling path to survival and you will be amazed to find out that this staircase withstood the collapse of the two massive buildings.  Portions of all the artifacts talked about here will be presented in the museum.
The main goal of the Memorial Museum is to tell the story of every person killed in the terrorist attacks on both September 11, 2001 and February 26, 1993.  The museum will help visitors connect with the impact of the attacks and it will accomplish this by presenting a wide variety of artifacts.  In the weeks and months following the attacks, a dizzying array of services were set in motion around the city to aid and assist those affected.  Walls were put up for posters of missing persons that were created by families searching for their loved ones.  The posters were haunting as they begged for information about people who never came home.  Sections of the poster walls were painstakingly preserved and are now presented at the 9/11 Museum.
Other artifacts from the buildings are also on display at the Museum.  Learn about the resilience of the “Last Column” from the South Tower and why it was chosen as the last artifact to leave the site, draped with an American flag.  The story about Karyn’s wings will tug at your heartstrings as you read how her stewardess wings forever linked three people through an incredible journey.

The History chapter perfectly sums up the purpose of the Museum as well as the events leading up to and including that historic day, and the repercussions that changed all of us forever.  Learn about the man behind the design of the World Trade Center.  The events of 9/11 are well detailed and precise in part because of the phone calls made by airline employees and passengers in the midst of the turmoil.  Flight attendant Betty Ong’s calm and professional phone call from Flight 11 provided detailed information to authorities on the ground and you can read excerpts of it here.  Brian Sweeney’s farewell recording to his wife from aboard flight 175 was emotional, but the hair will raise on your arms when you realize that his mother then watched the plane crash into the South Tower mere minutes after he called her to say good bye.  There is only one known photograph that documents the crash of flight 93 in Pennsylvania and you will see that photo here and read a minute by minute description of what was happening as the passengers attempted to take control of the plane.
All the stories of the people affected by the hi- jacking’s and the crashes are emotional, but the one that brought me to tears was the story about Welles Crowthers and his red bandana.  Like many people that day, his selfless act saved the lives of others as he sacrificed his own.   The FDNY suffered great losses that day.  As people fled the buildings, the firefighters entered.  Their credo is: rescue the civilians and take care of your men.  An unprecedented number of firefighters gave their lives that day in the line of duty.  The photo of Engine 21 is chilling because it was parked in front of the Towers and the front end had gotten burned out and the back end survived in perfect condition, an eerie reminder representing the sacrifice of the FDNY. 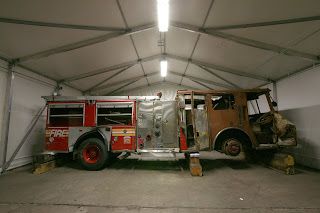 Seemingly there is no rhyme or reason why some people perished and others survived and a first person account by Mickey Kross testifies to this fact.  Find out here what his fire fighters helmet and a 2 of club’s have in common. 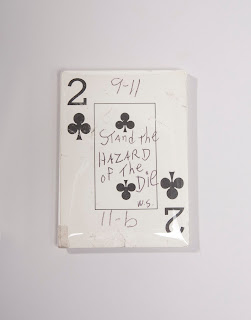 The Stories They Tell is an important book that documents one of the more frightening events in American history.  By seeing photos of some of the artifacts and reading the stories of the people directly affected, it helps us realize how much support emerged in the wake of the attacks.   It was a time when people not only from this country, but from around the globe united in a common goal to support one another in the form of a Memorial Urn, the Flight 175 Memorial Quilt, Lady Liberty and the Massai Cows to name several prime examples.
The stories and photos presented in this book are but a few of the thousands of artifacts that will be on display at the collections and exhibits of the National September 11 Memorial & Museum.   The Memorial and Museum will honor the almost 3000 victims of the attacks and the people who risked their lives to save them, as well as recognizing the thousands who survived and those who exhibited compassion afterwards.  Visiting the Memorial and Museum is on my bucket list.  I hope it will be on yours as well.  In the meantime, check out The Stories They Tell and I dare you to tell me that you are not profoundly affected by the pages within this book. 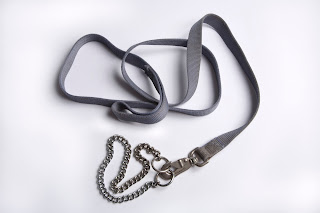 As an Amazon Associate I earn from qualifying purchases.   Get your copy here
I was provided an advance copy of the book for review purposes and asked to give an honest review. All opinions are my own.  All photos are property of Rizzoli Publishing and cannot be reproduced.