Johnny Cash Made me Cheat

Johnny Cash made me cheat and break my promise.  I guess you could say that I fell face first into a burning ring of fire. 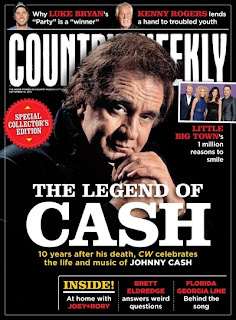 Way back in January of 2012 I ran a post called No Spend February.   I had decided that I was spending money on too many impulse items, namely magazines, books, CD's and I-tunes. The results of my one month spending ban were posted here.

Well, I learned a lot during my February spending ban and I tried really hard to carry it forward.  The library has become my new best friend.  I get numerous magazines, books and cd's from there.  I bet that rarely a week goes by where I'm not at the library picking something up or dropping something off.  My biggest savings though has been on the magazines.  I was always buying magazines by the check out counters at the grocery store.  I hardly ever went to the store where I didn't buy a magazine.  I was a magazine junkie.  But after the No Spend Challenge I kept it up and I haven't bought one single magazine from the store since February 2012.  Until today....

I was standing in line with my milk, eggs and pasta and who do I see staring out at me from the cover of Country Weekly Magazine but none other than Johnny Cash.  I adored Johnny Cash.  He's my all time favorite country singer and I saw him many times in concert.  Did I mention that I adored him?  And before I knew what hit me my hand reached out and snatched that magazine right off the rack and I threw it onto the conveyor belt with my groceries.  I think I heard Johnny laugh and growl "Hello, I'm Johnny Cash."

I know, it was a moment of weakness, but I don't care.  I'll go back on my No Spend rule tomorrow and I'll stick to it.   You might say I'll Walk the Line.  LOL!  Unless of course somebody puts Johnny Cash on another magazine cover.  Then I'm toast.

I'm linking up today at Sunny Simple Life.  Come take a look.
Posted by Kim@Snug Harbor at 12:00 AM