Save Your Pennies TB

My "Save Your Pennies" TB is charging across Europe and it's really fun to watch it move from country to country. 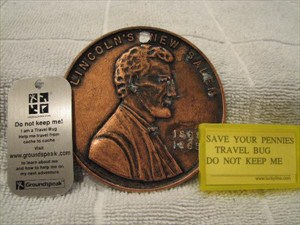 This TB has an interesting history so far.  We initially released this TB on Jan. 14, 2010 in cache GC22W1P. A week later, on Jan. 22, 2010, we were caching and found GC15CW9.  Imagine our surprise when we opened the cache and found our own TB?  We snatched it up, travelled around with it and then dropped it into another cache on Feb. 17, 2010.   From there, it got passed from cacher to cache until August 11, 2010 when it got dropped into GC1FAQE in Wisconsin.

Then it disappeared.  We didn't hear another thing about this TB for over 5 months.  On Jan. 15, 2011 we were at a Geocaching breakfast event  GC2FJGY which was back in Illinois.  I was picking through the TB's on the TB table and I almost fell off my chair when I saw my "Save Your Pennies" TB.  How the heck did it get there?  We took a picture with it and then placed it back on the TB table for it to continue on its journey.

It got picked up by another cacher and traveled around Illinois again until June 6, 2011, when it was placed into another event cache, GC2QDDM.  There it was picked up by cacher Dutchlandian, who was headed to the Netherlands.  On June 15, 2011, my TB landed at GC2NQH0 in The Netherlands.

Since then, it's traveled with various geocachers to Belgium, Germany, Luxembourg, France, back to Belgium, and Hungary.  For over a month now a caching team by the name of Paleoteam has been caching in Belgium, Germany, France, and now Hungary.  They have been kindly dipping it into many caches along the way.  The latest was GC3C873 and Paleoteam was the FTF (first to find) on the cache.  I bet they loved that!

So far my TB has traveled over 7700 miles and is getting a wild tour of Europe.  I love going to some of the cache pages that it's visited and reading about places I'll probably never get to see in person.  It's kind of fun to think about all these great geocachers who are taking the time to move my little TB all over the place.

Here's a couple of the pictures that have been posted for my TB...

I hope this little TB keeps travelling around and visiting all kinds of neat places.  What a fun journey.
Posted by Kim@Snug Harbor at 1:24 AM