Today I'd like to post a little tribute to an old friend of ours - Ed Sorenson.  Ed was 96 years old and I just learned that he passed away 2 weeks ago. 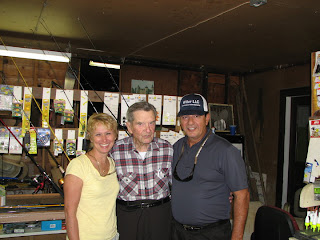 Ed owned and operated "Sorenson's Bait Shop" in Antioch, Illinois for 60 years.  He was there every single day, way past his 96th birthday.  The first location of his shop was at Rt. 173 and Rt. 59.  It was a little wooden building, out in the middle of practically nowhere, near the Chain O' Lakes.  My husband remembers going to this bait shop with his uncle when he was about 5 years old.  Ed stayed at that location for almost 30 years and then moved his bait shop down the road to a great location right on a channel, where he stayed in business for another 30 years.

I first met Ed when my husband and I started dating, 29 years ago. Ed and I took to each other right off the bat. But then, Ed "took" to almost everyone - he was the kind of guy who remembered your name, acted like he had all the time in the world to talk to you, and always had a smile on his face and a laugh on his lips. He shared his "secret" bluegill holes with us, showed me which jigs to use, and told me I had "the touch" when it came to catching bluegill. He invited us to fish on his property and if there were no customers in the shop, he'd grab his pole and join us.  He shared his special pickled bluegill with us, and every single time we walked through his door, he pulled a frozen package of bluegill fillets out of his freezer that he was saving, just for me. My kids climbed on his chairs, played with his live bait, and splashed in this minnow pond. We exchanged Christmas cards and if we didn't come by for awhile, he'd call to make sure we were ok.

His bait shop was a 2 room building - the shop was in front and a small storage room/kichen was in back.  Every inch of that shop had fishing equipment hanging from displays, rods propped up on the counters, nets hanging from the ceiling.  It was an organized chaos and Ed knew exactly where everything was, right down to the smallest bobber.  Polaroids of fishermen proudly holding their latest catch were dated and taped to the glass counters.  Ed didn't bother with a cash register.  The price of every item you purchased was written on a pad of paper, totalled on a hand calculator and your cash was placed into a cash box.  How quaint is that?

Sorenson went fishing almost every day, rain or shine, hot or cold.  He would stand and clean his fish with a small fillet knife and I'd perch on a stool and watch him.  He would proudly dangle a cleaned fillet in the air and say to me "see, if you do it correctly, it looks just like a little glove."  And it did!

Ed could amuse us with stories for hours and I could easily sit and listen to them.  In the old days he was also a trapper and during the trapping months he would clean and work on his pelts right there in the bait shop, in between scooping out minnows, selling fishing tackle and dispensing advice.  I can still remember the smell of the bait shop when he was working on those pelts.  During trapping season he'd store his pelts in the back room and he'd spend the night there, on a cot, with a shotgun cradled next to him.  On more than one occasion he chased off would-be thieves in the dead of night.  Sorenson was a nice guy but you didn't mess with his pelts!

Sorenson was a WW2 vet and proud of his service.  He told me that one time he was a color guard at a ceremony and he stood right next to General MacArthur.  It was clearly a thrill for him!  But the only time I ever saw him at a loss for words was when he tried to describe some of the horrors he had seen after the bomb was dropped.  His voice drifted off, he was silent, and after a minute, he changed the subject. 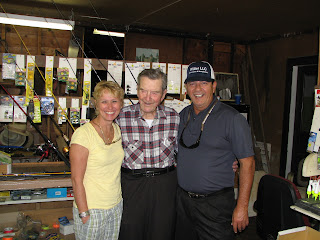 We stopped by his shop one afternoon last spring and we were horrified when we saw that it was closed down.  We called the number on the real estate sign and learned that Ed had recently taken a fall, had broken his hip and was now living in Georgia with his niece.  I was crushed to see the shop dark, the windows clouded with dirt and the words Out of Business scrawled across his sign.  I went and peered through the window at the empty space within and choked back a sob as I returned to the car.  Ed's bait shop looked lost without him.

My stepson called us this morning and said there was an article in the newspaper and it mentioned that Ed had passed away on Sept. 26.  Gone, but not forgotten, Ed was a truly gentle man, the kind of person who put others first and who truly embodied the outdoor spirit.  I will always remember his smiling face and hearty laugh.  I am a better person for having known him and I will think of him each and every time I catch a bluegill.

Rest in Peace my dear friend.  You will be missed.  May there always be a fish on the end of your line! 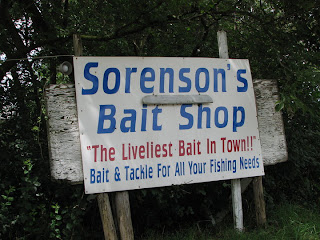 And one last thing - don't forget to stop over at The Outdoor Blogger Network and check out the gear extravaganza going on over there.  Happy anniversary ! 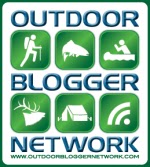