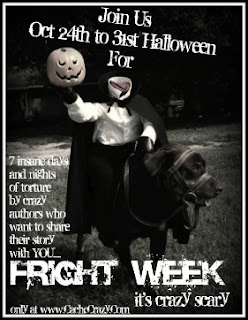 It's a Halloween Frenzy this week over at CacheCrazy!  Join in the fun and see what scary happenings are in the works. 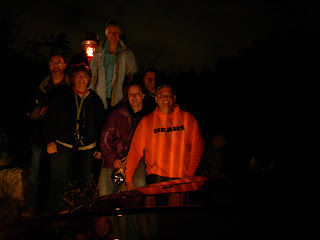 What would you do on a dark night while billowing clouds march slowly across a shining, full moon? 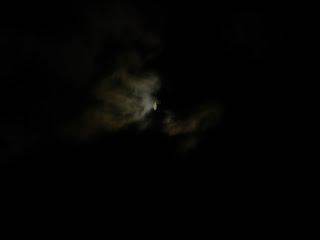 The kind of night where the wind howls and blows the trees so frantically that their leaves rain down like colored snow…. The type of night where creatures scurry in the darkness just beyond your line of sight, dogs howl and red eyes glow thru the blackness….. If you’re out in the middle of who-knows-where, with a bunch of people toting flashlights and GPS’ers, then you must be geocaching. And that’s exactly what 7 of us were doing last weekend as we attempted the Scary Roads multi-cache.

Scary Roads is a multi stage cache and it has to be done in the dark. The first stage co-ordinates take you to a dark and deserted back road, far out in the country. Plus, its directly in front of a cemetery. A cursory glance at the cemetery reveals no ghosts or goblins and we made a few wisecracks about Halloween and restless Spirits. From there we piled out of our car and began swinging our flashlights around until we located a fire tack on a light pole. A fire tack's about the size of a thumbtack and when a light hits it, it will glow and reflect back at you. 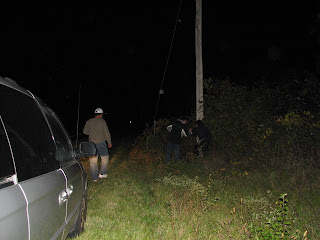 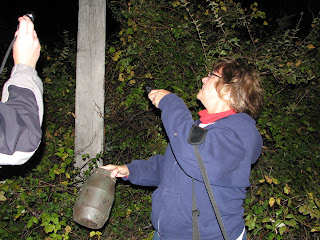 We quickly found the first fire tack and from that point started searching for a cache container. Off in the distance we could hear a dog howling. At least we hoped it was a dog howling….Once we found the cache container, we opened it up, got the directions to the next stage, and collected a clue for later on. 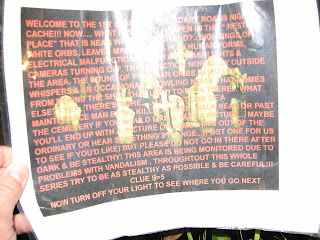 It’s hard to read from the photo, but you need to remember that the message at the first stage warned us about orbs of light, mysterious electrical malfunctions, strange vehicles patrolling the roads, eerie howls and cries, and eyes peering out at us from the dark.

Climbing back into the car, we pulled out onto the road and as we drove towards stage 2, Lou noticed headlights in the rear view mirror and watched as a vehicle pulled out from the cemetery and followed behind us. Slowly at first, and then picking up speed, the car was quickly gaining on us. Louie stepped on the gas and mumbled something about the ghost following us, and each of us turned and stared out the rear window as the car pulled up within 20 feet of us. That car stayed directly behind us for about 2 blocks, then suddenly slammed on its brakes, skidded to a stop, and just sat there, in the middle of the road. We sped along, eager to put some distance between us and him, until gradually his headlights faded away. What the heck was that all about?

We rounded a corner and arrived at stage 2, where we again scampered around in the dark, looking for the fire tack. We found the cache, read the note and gathered another clue. As we were replacing the cache we heard the distinct hoot of an owl from somewhere behind us. Mary and I both looked at each other at the same time and asked, “Did you hear that?” As we headed back to the car, the moon was shining brightly overhead and there was a strange, single light shining down the road. 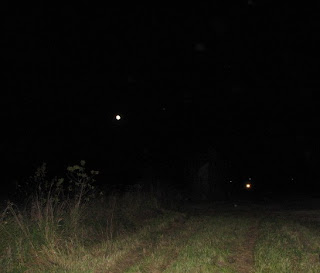 No ghosts or mysterious cars followed us as we headed off for stage 3.

At stage 3 we found the next clue. In order to not spoil it, let’s just say the cache consisted of something that had to do with a pair of glowing red eyes. We got another clue, and we had to decrypt a message this time. 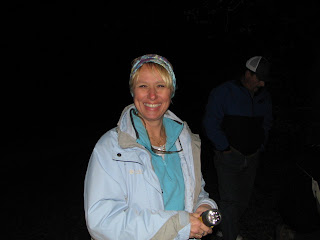 On to stage 4, which was my favorite stage. We parked next to a bunch of huge rocks and one was splattered with something that looked an awful lot like blood. (look closely and you can see it on the middle rock) 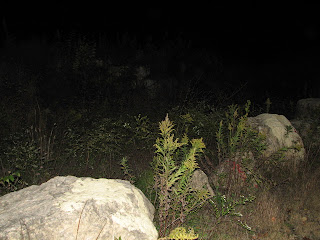 Just beyond that there were giant boulders placed like steps, leading up a hill to the remains of an old building foundation. Slowly we picked our way through the brush and climbed the steps. 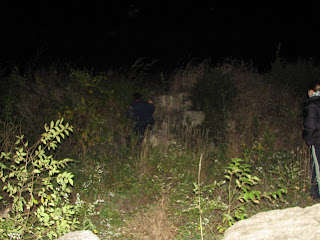 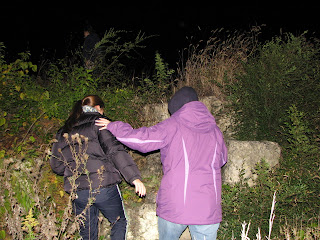 I kicked something that looked like a skull, which went flying thru the air towards Chablis and Nicki. I screamed “skull,” they thought I yelled “skunk,” and the 2 of them went shrieking back to the car. I can’t tell you what Mary saw, but her face should say a lot! 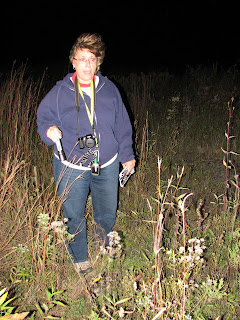 The cache and codes we needed were soon in hand and we were on our way to stage 5 after Chablis and I stopped long enough to take a phooning picture. 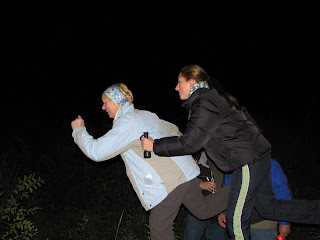 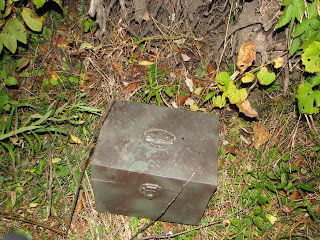 ......... and a severed hand, which I won't show you becasue I don't want to spoil anything.  However, just as I was going through the lockbox and writing down our next clue, my flashlight went out. I gave it a shake, wiggled the on/off switch a couple of times, slammed it against my hand, opened it up and shook the batteries - nothing. My flashlight, which I had inserted brand new batteries into before we left that night, was dead. Enough said! Suddenly the cryptic message at stage 1 was becoming more and more realistic! Tom grabbed our code clue and we high tailed it out of there.

The 6th and final stage was interesting for many reasons. 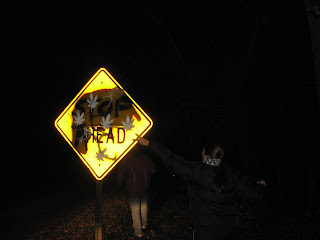 We found the spot where the final cache was supposed to be hidden. 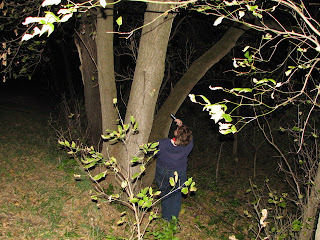 Mary, Chablis and I all circled the area, moving leaves, sticks and brush. No cache. Just then headlights appeared in the distance and a white pick-up truck rolled up, stopped, and the elderly driver leaned his head out the window and asked what we were looking for. We told him we were on a scavenger hunt and he just nodded his head and slowly drove off, eyeing us in his side mirror as he went.  Nicky, Chablis and I crossed the road, thinking the final co-ordinates might be off a little. We scampered up a hill, squeezed thru a fence and ran right into a huge headstone. Apparently we were in another cemetery. I veered off into the woods along the western property line while Chablis and Nicki cautiously moved among the headstones, looking for anything that might be the cache. I finished searching the wooded area to no avail and went to meet them back by the cemetery. Nicki was standing and shining her flashlight into the darkness. “What the heck is that?” she asked. It looked like a house window with a light on, so I slapped her hand down and whispered “That might be a house, don’t shine your light at it.” But when we looked back up, the light had disappeared.

Everyone else was still on the road searching for the final cache, so we re-joined them. We pulled out our notebooks and compared notes, doing some quick figuring to be sure we had calculated everything correctly. No mistakes, so we were in the right spot. We all headed back to where the co-ords put us. Lou Jr. walked up, bent over, picked up the cache and asked, “Is this what you’re looking for?” Really??? I’m telling you, it wasn't there when Mary, Chablis and I had looked earlier. I swear!

We opened the cache and signed the log, happy that we had finished the cache without too much difficulty. Well, not much difficulty if you don’t count the howling dog, the hooting owl, 2 mysterious vehicles, one strange green light, glowing eyes, a severed hand, and a dead flashlight….. Just like the message at the first stage had predicted……. And oh, yeah, Sweet dreams….. We saw this little message as we replaced the final cache…… 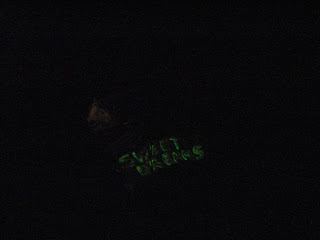 So here we are, the happy bunch after a fun evening.  Be sure to scroll all the way down...... 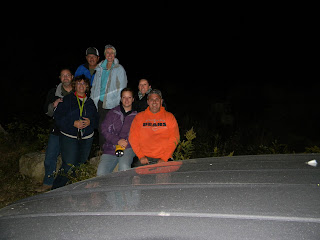 Here's the last picture of the night.  Can you see the green apparition in the bottom, middle of the picture???  It's faint, but it's there. 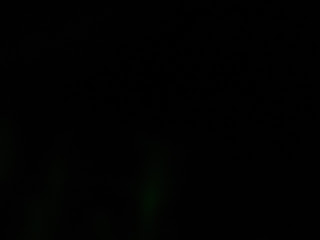