Following Atticus is a delightful book written by a fellow blogger.  I purchased this book because it sounded so darn good.  And it was!  I’m writing a review simply because I enjoyed the book and I wanted to spread the word.  From one blogger to another…. 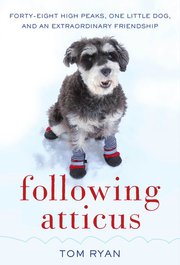 With one eye on the trail and one eye on Tom, Atticus blazes the way up and down 48 different mountain peaks in New Hampshire.  Several times.  You might not think that's too unusual until you discover that Atticus, dare I whisper it, is a dog.  An adorable miniature Schnauzer, Atticus has a mind of his own, an iron will and a love of hiking.
Tom, on the other hand, is a middle aged, overweight newspaper editor who has an empty hole in his life and a yearning to fill it.  He just doesn’t know quite how to accomplish that.
Following Atticus is more than a true story.  It’s a tale of love and friendship between Tom and his canine buddy.  I thought it interesting that Tom never referred to Atticus as “his dog.”  They are equals and their relationship is forged on mutual respect and trust.  Most of the time Atticus confidently takes the lead, but their roles reverse as safety and weather conditions dictate.  Where you lead, I will follow…..
To me, it’s a story of blind faith, of putting one foot in front of the other and learning to love and believe in something bigger than you.  Are there obstacles along the way?  You bet!  Do they make their way up every mountain without struggle?  Of course not.  Are they sucker punched by bad weather, sickness, and even the death of a dear friend?  Read the book!
My favorite part of every hike is the peak, where Atticus perches like a little Buddha and serenely gazes out over the horizon.  Metaphorically, reaching those peaks is the reward for the struggles endured along the road called life.  I think Tom got rewarded beyond his wildest dreams by climbing those peaks.
I’d like to thank Tom and Atticus for sharing their extraordinary journey with me.  I learned a lot while I was lost in the pages.  Check out their book.  I think you’ll get lost in the journey too.
The Adventures of Tom and Atticus
Following Atticus Facebook Page
Posted by Kim@Snug Harbor at 1:52 AM