An Earthcache at Wickliffe Mounds

While we were geocaching in Wickliffe the other day, we took the opportunity to grab an "Earthcache" while visiting the Wickliffe Mounds.

An Earthcache is a geocache where you learn about a unique geoscience feature about the earth instead of finding a hidden container.  Usually you have to find the answers to specific questions and mail the correct answers to the cache owner in order to get credit for visiting the cache.  To read more about Earthcaches, go here:   http://www.geocaching.com/about/cache_types.aspx

Wickliffe Mounds is the archaeological site of a prehistoric Native American village of the Mississippian mound builders who occupied this bluff overlooking the Mississippi from about AD 1100 - 1350.  These natives were peaceful indians who grew corn and squash, fished the river and hunted the forest.  For reasons yet to be determined, they abandoned this village after the 1350's. 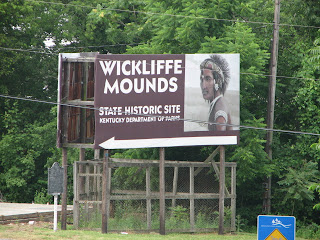 In 1932 the site was purchased by Colonel Fain King, who began to excavate the site, along with his wife.  He opened the site for public visitation calling it "King Mounds" and then later the "Ancient Buried City."  When the Kings retired in 1946 they turned the site over to The Western Baptist Hospital of Paducah who owned it until 1983.  The hospital then donated the site to Murray State Universary in 1983.  Murray State's research department reorganized the site and placed museum personnel in charge and then updated the exhibits. 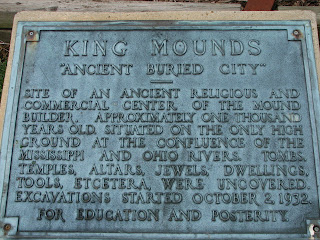 This small table was in the bathroom and I am only posting it here because the sign on it cracked me up... 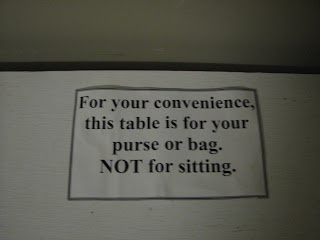 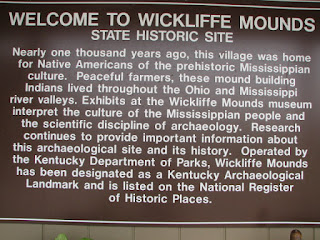 The house construction was quite interesting.. 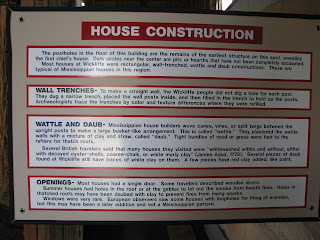 The floors were earthen with large holes where they had their pots for cooking.  The walls looked to be sticks covered by straw and clay.  I'd love to show you pictures but they asked that no pictures be taken.

One section had beautiful pictures and designs carved on to wood.  Each carving was about 1 ft. by 1 ft. and very detailed.  Here are the descriptions of the carvings... 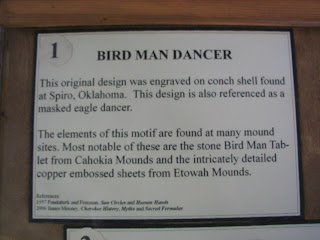 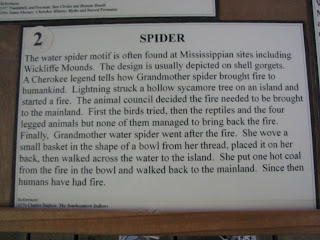 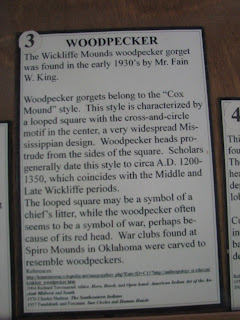 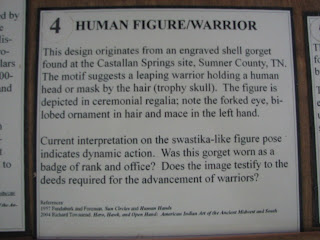 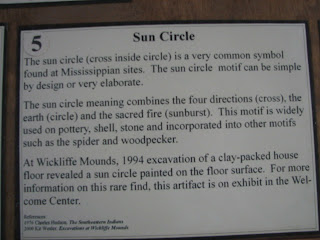 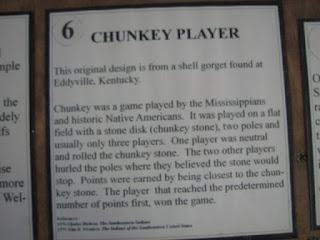 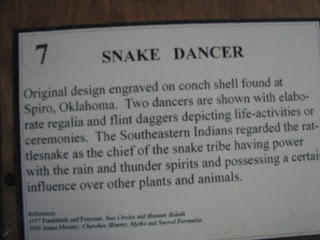 '
It took years for the mounds to reach the heights they are today. 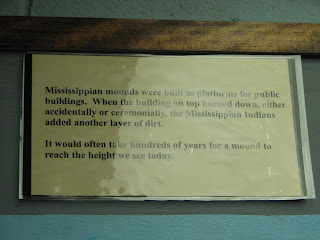 There are 4 mounds at Wickliffe.  The Ceremonial Mound is the largest.  It probably served as the center of economic, political and religious activity.  We are standing on top of it here. 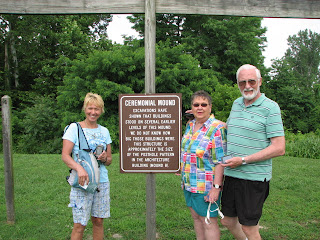 And looking at it from a distance here... 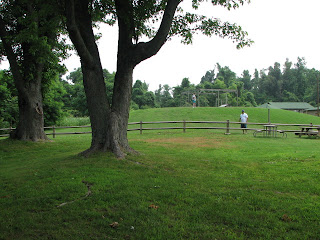 The Architecture Mound is the only residental mound on the site and probably belonged to the Chief.
The Cemetery Mound has burials dated to the 1200's.  They reveal patterns of diet and injury, insight into diseases and life expectancy rates.
The Lifeways Building Mound was the most interesting to me.  Again, we weren't allowed to take pictures, but they had displays of arrowheads and farming tools, games pieces, pottery, grains and other food items the indians grew and ate.  There were huge displays set up showing the burial grounds and how bodies had been placed and also examples of how they cooked and farmed.
If you'd like to read more about the Wickliffe Mounds or even visit the site yourself, please go here for more information:  http://parks.ky.gov/findparks/histparks/wm/
Afterwards, in order to log the cache, we had to answer these questions:
1) What is the name of the ancient culture that inhabited the area?
2) What years were the areas inhabited by the ancient culture?
3) How many Mounds are located within the park?
4) In your opininon how much higher are the mounds than the bluff?
5) Post a picture, onto the cache page, of you and/or group with GPSr at the ceremonial mound.

Once we emailed our answers to the cache owner, we were able to take credit for finding the cache.

On our way back to the lake I spotted a gorgeous male turkey standing on the side of the road, preening for the females.  He was standing there with all his feathers displayed.  I thought it was a statue at first because he was so large and colorful.  Then he moved and I screamed for Louie to stop the car and I leaped out and tried to get a picture of him.  Who knew that turkeys could run that fast?  He took off and all I got was a picture of the backside of 2 of the females. 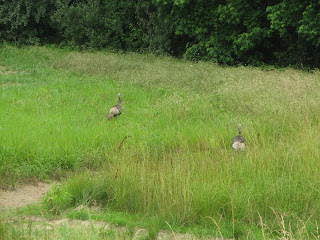 I must have looked like some kind of a nut running through the field after these turkeys trying to get another picture of that big Tom.  But he was too quick and I never even got to see him again, although we ended up seeing about a dozen females off in the distance.  I love it when I get to see stuff like that!

Come back tomorrow - we are headed for Nashville!
Posted by Kim@Snug Harbor at 9:01 PM