I was recently given the opportunity to review "AUDUBON’S AVIARY: The Original Watercolors for The Birds of America," by Roberta J. M. Olson, Skira Rizzoli, 2012. 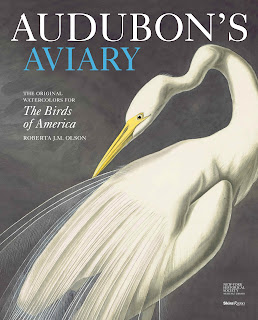 Audubon's Aviary is divided into three sections.  The first section is a fabulous biography of John James Aububon (JJA) that begins with Audubon's birth in 1785 as the illegitimate son of a French naval officer/sugar plantation owner and a French chambermaid.   It covers his childhood where he was raised by his father and step mother in France and groomed as a country gentleman.  Moving to America when he was eighteen years old, he fell in love with the country, and adopted it as his new home, becoming an American citizen in 1812.  After marrying in 1808, he spent several years drawing in his spare time while failing at numerous business attempts.  It was in 1820 when he fully committed himself to publishing his groundbreaking classic The Birds of America.  His journey then took him around the country in search of birds and across the ocean to London in order to raise subscription money, and it wasn't until 1838 when the final engraving was completed. 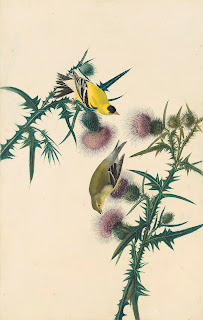 John James Aububon created 435 watercolors in preparation of the engravings for his The Birds of America (1827-1838).  He envisioned a collection of pictures showcasing every American bird and his talents as an artist, naturalist, ornithologist and writer enabled him to embark on this labor of love.  Self-taught and with no formal education past the age of fifteen and only one year of bird and mammal drawing training in 1805, Audubon managed to fulfill his vision because of his natural talent and the passion he felt for his subjects.  While most of his contemporaries drew their avian's from taxidermy specimens, JJA traveled the country for years in order to observe birds firsthand in their natural habitats.  Audubon collected avian examples and took measurements, dissecting them and making extensive notes. He then drew based on his observations of the live birds or from the recently killed specimens.  He had numerous journals filled with information on every bird, detailing what it ate, what it sounded like when it sang, the color of its feathers, and how it behaved.  His studies and the way he then drew his subjects changed ornithological illustration because he was able to capture the essence of each species. 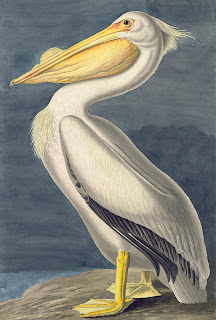 
The second section of the book is dedicated to newly photographed copies of one hundred and fourteen of Audubon's most spectacular birds.  I was in awe of this section of the book.  Each one of the 114 paintings  is given its own two page spread.  One page consists of commentary about that bird based on Audubon's original field notes.  Because JJA kept extensive notes on each species, it's usually documented where he originally saw the bird, what the habitat consisted of, what the bird ate, how it interacted with its family and how it hunted or nested.   The notes also list why Audubon drew the bird in one particular pose or another, why he used a certain landscape or the reason he featured an insect or animal.  Often he added a personal story behind the collection of that particular bird as well.  Also included is what type of art medium he used on that painting, such as watercolor, graphite, black ink, pastels, gouache and glazes.


The second page dedicated to each bird consists of a full color photo - and they are stunning!  The colors are crisp, vibrant and leap from the page.  Audubon envisioned drawing all his birds life size and achieved this goal by using double-elephant size paper, which measured 39 1/2" x 26 1/2".   He also had the foresight to include both sexes in his drawings and included features of anatomy that he detailed like footnotes.  Birds are captured in a variety of natural poses - perched on a branch, soaring in flight, cooing in love, or chasing a meal.  Often a bird will peer directly at the viewer, or nibble on a berry, an egg or an insect.  The reader will delight in finding unexpected treasures such as a chipmunk, a frog, or butterfly.  The attention to detail in the surrounding elements is exquisite, such as the grain of wood, or nest grasses that appear to be blowing in the breeze.  And while JJA uses naturalistic settings, they never overshadow the birds, merely enhance them with their native foliage and habitat. 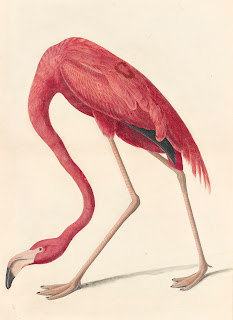 
The third section consists of a selected bibliography and a detailed chronology of Audubon's life, which is extremely interesting to read on its own.  In addition, the third section contains smaller sized reproductions of the remaining watercolors in the Historical Society's collection, along with pertinent information for each watercolor.

After reading the book and admiring all the watercolors, some of my favorite selections include....

"The American Flamingo" which is pictured above.  I liked the way JJA captured the height of this bird by manipulating it to fit the confines of the paper.

"The Black Rail" because of the delightful way a chick is trailing it's father.

"Wild Turkey" which has truly beautiful coloring and is plate number 1 in the series.

"Great Egret" was used as the cover photo of the book.  The plumes are delicate and graceful and I can just imagine them dancing on the wind.

"Tufted Titmouse" is pictured below and is my absolute favorite drawing.  I love the delightful poses of the mated pair perched on the pine branches, as well as the blues and greens of this drawing.  It makes me smile and I think that's what JJA intended.  I could never tire of looking this drawing. 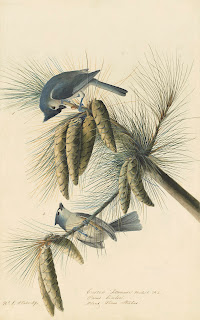 Before I was offered the opportunity of reviewing this book, I had very little knowledge of John James Audubon.  This is what I did know - he drew and painted pictures of birds.   That assessment was like saying that the Grand Canyon is big, or that Niagara Falls was a water fall.  For someone who enjoys nature and being outdoors as much as I do, I am ashamed of myself for not knowing more about John James Audubon and his life's work.  Because of  "AUDUBON’S AVIARY: The Original Watercolors for The Birds of America," I learned the history behind this remarkable man and I found out more about America's birds than I ever learned in school.  I didn't appreciate their beauty or significance before.  I will never view birds the same way again.   I've also come to value the treasure and legacy that John James Audubon left for generations to enjoy.

The New York Historical Society purchased the collection from JJA's widow in 1863.  Beginning in March 2013, the Historical Society will present a three part series of exhibitions, beginning with Audubon's Aviary: Part I of the Complete Flock.  The series will offer visitors the unique opportunity to view Audubon's watercolors in the order they were engraved.  I highly suggest you visit if you're anywhere near New York City.

Do I recommend this book? In one word - Yes!  It is a treasure.  Well written, informative and engaging, it has something for everyone.  I am smitten!

"AUDUBON’S AVIARY: The Original Watercolors for The Birds of America," by Roberta J. M. Olson is being published by Rizzoli Publishing and will be released Oct. 23, 2012.


I was provided an advance copy of the book for review purposes and asked to give an honest review. All opinions are my own.

(photos used with permission of Rizzoli Publishing.  Do not reproduce without permission)
Posted by Kim@Snug Harbor at 1:00 AM