It's always fun to do a geocache that's in a great location and "Goosepoopin'" fits that bill!  Goose Island is a small island towards the northern end of Kentucky Lake.  The geese just seem to gravitate to the island, hence the name.  There is also a lot of goose poop there as a result.  I'd been eyeing the island for awhile to place a cache there myself, but just never got around to it.  And thank goodness I was beaten to it, because a group of cachers placed a cache there last week and it's a good one!
They named the cache Goosepoopin' which I thought was a great name.  It posted on July 16 and unfortunately, we were in Chicago when it did.  I put the cache page on my watch list and kept checking it to see if anyone went and grabbed the first to find (FTF).  I was hoping that nobody would go do it before we got back down there, but alas, on the 18th 2 cachers beat me to the punch - Fyan Ragan and BlueRebellion12.  Good job guys!  Oh well, the early bird gets the worm, or the goose poop, as they say!  I placed the cache on my to-do list and once we got back to the lake, I grabbed Chablis and the 2 of us took the pontoon over to the island.  If you can't get a FTF, then a 2TF is almost as good.  And in this case it turned out to be very good!

Here we are approaching the island.... 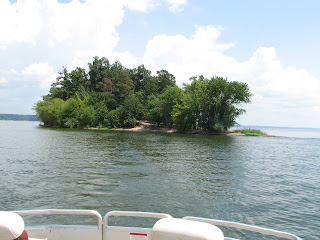 We secured the boat and set off with the GPS..... 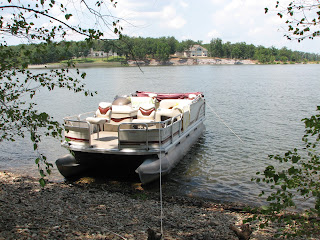 I think it's over this way! 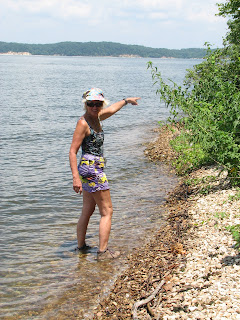 We picked our way through the brush and soon had the cache in hand..... 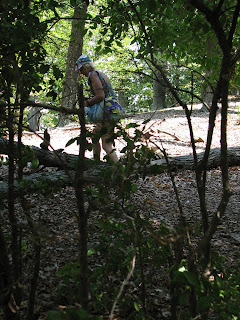 No, no, no....  I'm not going to show you where it was, but I do have permission from the cache owners to show you the nice size cache container..... 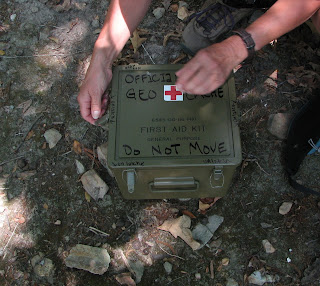 It was jam-packed with lots of swag! 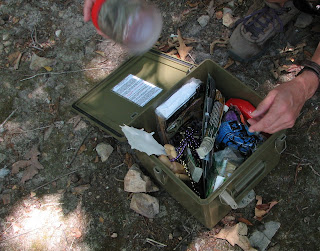 And here's the best part!!  Sometimes geocaching is like a real life treasure hunt - the first to find guy Fyan Ragan, left a gift for the 2TF - a $ 20.00 bill.  How awesome is that??  It totally made my day!  Fyan perfectly demonstrates how to take this game up a notch.   A little surprise like that is so generous of spirit. 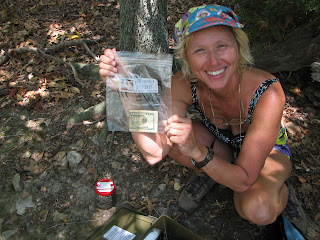 After signing the logbook, we left a lightload towel, a carabinder and a jacket patch as swag. 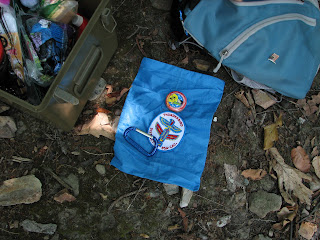 We walked around to a small overlook and took in the view of the lake.... 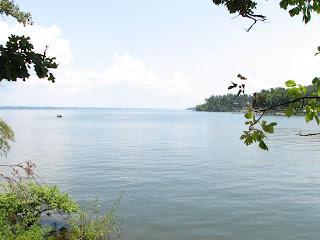 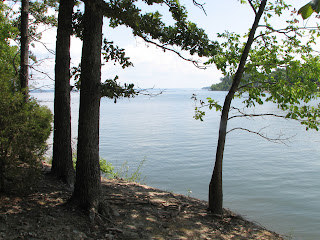 Even Snoopy had to get his picture taken in this beautiful location... 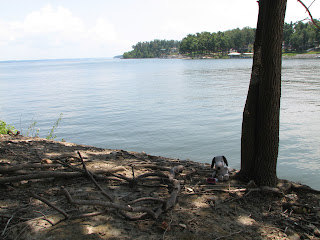 After we got back to the lake house, I logged in our find and gave the cache a favorites point.  I liked the location of the cache, the difficulty level because you have to access it by boat, the cache container was a nice size and it was loaded with swag.  It was just a top notch cache all the way around.

I decided to email the cache owners and tell them how much I liked it and discovered that they were visiting Kentucky Lake for their vacation and had placed the cache with their uncle, who lives there.  They had spent the previous couple of days geocaching around the lake themselves, and had even done my 2 caches that I have hidden there.  I thought it was a great story and asked them if they'd like to be featured on my blog.  They said yes, so keep reading to hear a little about Crockett, Michelle and Parker..... 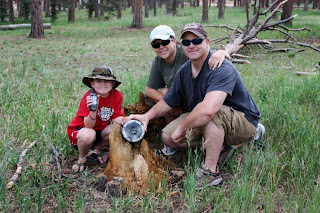 What's your caching name and who makes up your group?
Campcaching is myself (Crockett), my wife, Michelle, & our son, Parker. The "Goosepoopin'" cache was a group effort with team door kids & Cap'n 777 while on a family vacation at Kentucky Lake. 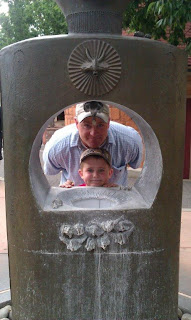 How did you start caching?
A friend told us about their experience caching in Hawaii & we were intrigued.
How long have you been caching and how many have you found so far?
We started in Dec. '10 & have about 550 so far. 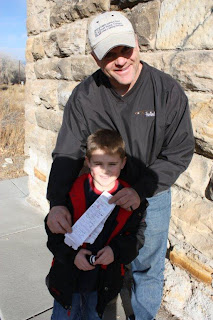 Where do you live?
Woodland Park, Colorado
Have you placed any caches near home?
We have recently moved this summer but in our old town, we have 13 active caches. We now live about an hour from there & hope to be able to maintain them when we visit friends & family. The cache we are most proud of is GC2PNCW--I put in some hours on that one!


You said you made the cache container ahead of time and shipped it to your uncle.  Did you have Goose Island scoped out already or did you decide on it when you got here?
Team door kids (cousin) came up with the idea to put one on the island awhile back when he realized there wasn't one already out there.  We wanted to place a big container so we shipped it full of goodies to our aunt & uncle's lake house (Cap'n 777) so that we wouldn't have to worry about saving room in our luggage!
Did your uncle already geocache or did you just recently introduce him to it?
Our vacation last week was his 1st introduction to caching & I think it's safe to say he's hooked! The whole family went out on his pontoon & loved boat caching! So different than Colorado to say the least. Cap'n 777 is going to maintain Goosepoopin' & plans to place more caches in the area that are accessible by boat. It's too hot there to be far from the water! This was our 3rd visit to their KY Lake house & I'm sure we will place more caches on future visits. We also roped team door kids into caching during a camping trip last summer! Geocaching is such a great family activity that it's not too hard to get folks excited about getting into it! Kids love a treasure hunt but it turns out, us adults do, too!
What's your favorite type of geocache to find?
We like the challenge of micros but for our son's sake, we like the large containers so there's a chance of trading swag. 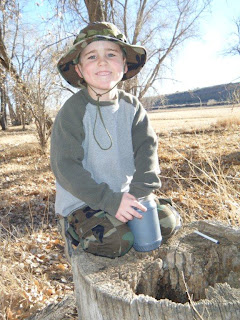 What do you like the most about geocaching?
We like that it gets us out of the house & on trails, roads, places that we might not otherwise even know about & you meet tons of nice people along the way! (even if it's only through email like Kim!) One of our favorite caching coincidences happened to us in Phoenix last year. We were caching in a field on outskirts of town & Michelle walked back to the truck to pick us up on the other side. I could see a police car pull in behind her & he was still there when we were walking back so I was concerned we were on private property. He knew exactly why we were there because he was a cacher himself! He said, "You guys should go do the ones on the Maricopa Trail because it's beautiful & I've placed several of my own out there." We already had plans to do that trail the next day & had his caches loaded in our GPS...small world--even in Phoenix! We obviously logged the caches we did of his & said how nice it was to meet him. He wrote us back & said he hoped we had a great AZ vacation. You don't meet too many mean people out geocaching! 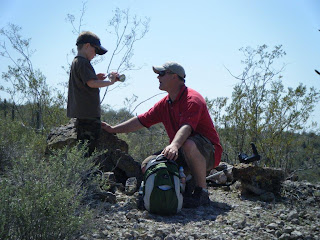 What was your favorite cache so far and why?
GC1XJ36 Florence Park: Triangle Cookout! We looked for that dang cache probably 10 times before finding it & it was so cleverly hidden that it definitely stands out as a favorite. We were new to caching & felt like celebrating when we finally found it! The owner of the cache is also the friend that 1st told us about geocaching. :)

Any other fun or memorable caches? 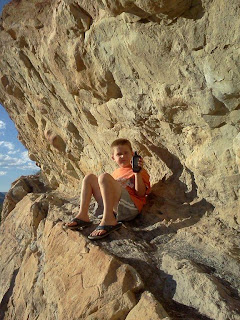 And GC1XDH2 where we actually saw a bear.  We ran into that bear last summer & he scared us so bad! We had been down in this rocky canyon being so loud & all the sudden my husband is drawing his gun & telling us to start climbing to the car. Look up & this guy was just watching us from above. We took pictures when we got to the car! eek! 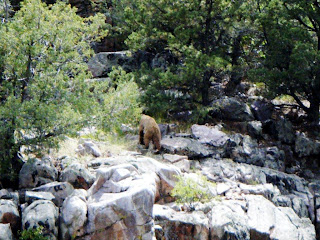 I'd like to thank Crockett and Michelle for placing a fun cache and for letting me feature it here on Snug Harbor Bay.  It's always fun to get to talk to other cachers.  Maybe we'll be able to meet in person some day down at the lake!
Posted by Kim@Snug Harbor at 1:19 AM