Yesterday I had the pleasure of meeting a fellow Sanibel Island Lover - Moira. 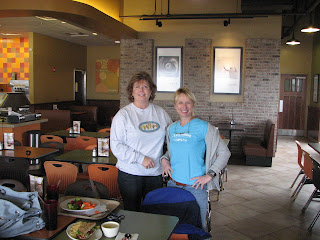 Moira and I started talking to each other through the Sanibel Island Message Board a couple of years ago.  She'd make a trip down to the island and I'd ask her about it.  Then I'd make a trip and she's ask me about it.  We'd share tips about where to find shells, where we were eating meals, where we were staying, favorite beaches.  Both of us share such a love for this same small island off the coast of Florida.  Last year we realized that we live less than an hour away from each other.  Since then, we've been plotting and planning to meet for lunch.

Because of Saibel, we share a common thread that winds around many of the same people we've met while on the island, or through blogging.  Both of us have met Pam, from iloveshelling.  If you want to know anything about what's happening on the island, go to her blog.  She knows everyone and everything!

Moira and I also both took day trips with Captain Brian this past summer as well.  If you're on Sanibel, do not miss an opportunity to take a cruise with this man of the sea.  Not only is he an accomplished photographer, but he knows the good shelling spots, charms the dolphin so we can snap photos, points out local flora and fauna and he slices up a mean watermelon as well.

So after many months of unexpected delays, Moira and I were finally able to arrange a meeting for yesterday.  We sat for 2 hours and talked non-stop.  Meeting Moira in person was like seeing an old friend. 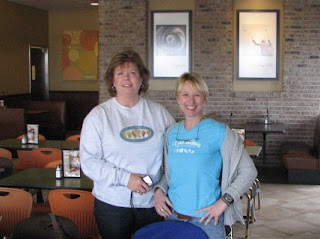 We had such a good time talking about Sanibel and shelling and all the bloggers we have in common.  We both wore our Sanibel Island shirts that we purchased from the iloveshelling gift shop.  Pam, we did that especially for you!!  Darn, we should have phooned......

It was such fun getting to meet another fellow Sanibel Shelling Sistah - They're a very special breed!
Posted by Kim@Snug Harbor at 1:12 AM