Everyone has holiday traditions, right?  Something you've done for ages because your mom always did it, or something that reminds you of grandpa.  Maybe it's a special ceramic tree, or an ornament or a knick-knack.  For me, it's Christmas cookies. 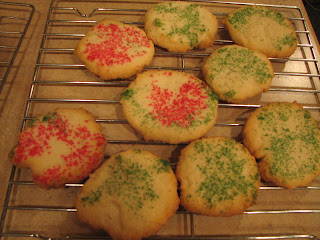 Every year I bake about 10 different cookies, my mom bakes a bunch, Laurie bakes a bunch, and on Christmas day we bring huge platters of them to mom and dad's house and have them for dessert later on in the afternoon.  Mom and Laurie always put aside one afternoon each December to make my Grandma's special nut cookies and dad is always sure to make a batch of his mother's Ice box Cookies.  Christmas would not be Christmas if each of us didn't get to snack on our favorite cookies.  Somehow it ties us to the past, if only for a little while.

As we get older, leave home, start our own families, we begin new traditions as an extension of our old ones.  For example, every year I make gingerbread cookies with my kids.  We plan one afternoon around the kitchen table, elbow deep in ginger, flour, rolling pins and cookie cutters.  We make heaping bowls of frosting and decorate each cookie with sprinkles and candies.  We may make 10 different cookies each Christmas, but the gingerbread cookies are number one on our list!  I think that will be the one special cookie my kids will someday make with their own kids, hopefully while telling them "I remember making these with your grandma when I was your age."  I hope they remember to let them lick the frosting bowls with their fingers and don't care when the cookies aren't perfect.

Another tradition my kids insist on is taking out every.... single.... holiday stuffed animal they have ever gotten and lining them up against one wall in the front room.  We have Santas, and reindeer, and snowman in varying shapes and sizes and if one is missing, they are sure to point it out and boxes are ripped apart until each stuffed animal is in his proper place.

We also have a old nativity scene that I won may years ago in a raffle at The Historical Society and it has to be placed underneath the television, in the same spot, every year.

But our favorite Christmas tradition is something that I started when Chablis was about 3 years old  - The Christmas Elf.  On the 1st of December I hang up our stockings.  Beginning that night, the "Elf" stops by and leaves a small, wrapped gift in someones stocking.  Talk about a genius way to make your kids get out of bed in the morning!  They would leap out of bed every morning until Christmas, eager to see who got a gift from the Elf. 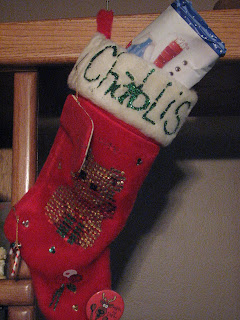 The lucky recipient was allowed to remove the gift from their stocking and gently squeeze it, touch it, sniff it and make guesses as to what it was.  Then they had to return it to their stocking, unopened, because they had to wait until Christmas morning to actually open it. 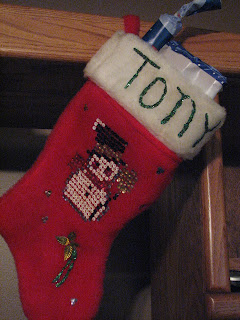 Truth be told, the gifts are usually little things, like a toothbrush, nail files, gum, a candy bar, an I-Tunes card, a magazine.  Sometimes I think the excitement of guessing what was in each package was more fun than actually opening it.  You know, the anticipation factor.

Then on Christmas Eve, while we're at church, the Elf always makes a quick appearance and leaves 2 gifts on each of their beds which they get to open after church.  One gift is always a brand new pair of pajamas so they look nice for pictures and movies on Christmas morning (yes, I have a little of my dad's Cecil B. DeMille in me as well) and the other is usually a Christmas movie or game that we can watch and play with before bedtime.

One year we got home from Church while the Elf was still in their bedroom and we almost caught him.  Alas, by the time we ran to their room we were left staring at a partially opened window, some tiny footsteps in the snow and and the Elf's hat laying on the ground.  We left the hat by Santa's cookie plate that night with a note for Santa to be sure to give the hat back to his Elf.  That whole episode was exciting and from then on, they hoped and prayed every year to catch the Elf in the act.  Too bad he was always too quick for us!

Then we have Mom's favorite traditions...... I mean, the holidays would not be complete without my own warped sense of humor traditions that I unleash on my unsuspecting family. 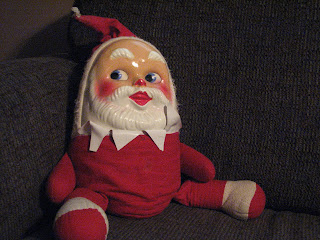 Isn't he a cute, chubby little thing?  I got this guy as a gift for my 1st Christmas, which technically makes him an antique, I think.  He's old!  And I love him and he's actually in pretty good shape for such an old guy.  Louie hates him.   He thinks he's creepy looking.  So I like to stick Santa Elf around the house where Louie is going to run into him unexpectedly....  Like on Louie's end of the sofa, nestled up against his pillow....  On top of his laptop...... Under the blankets on Louie's side of the bed....  Or in Louie's chair at the kitchen table.   I just think it's kind of funny!

The other tradition I have involves this adorable Snowman.... 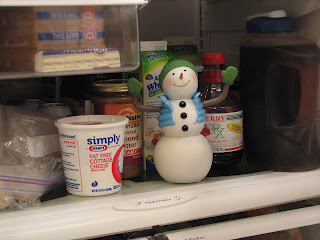 I won him in our family grab bag a couple of years ago and he is a source of constant amusement for me.  He sings and talks and the reason he's in the refrigerator is because he's motion activated, so when someone opens the door, they get this...... (blogger is having video issues right now so the videos aren't working)


Isn't that a riot?  You never realize how many times in one day your refrigerator gets opened until you get one of these.  It scares the crap out of everyone for the first day until they realize it's in there again.  After awhile Tony starts calling him "That %$@** Snowman,"  Louie walks around mumbling "I hate that Snowman and I hate that stupid Santa Elf even more."  Chablis will shut him off so he can't talk, and I laugh every time I open the refrigerator.  Occasionally I'll get up in the middle of the night and wander out to the kitchen for a bowl of cereal and as soon as I open the refrigerator, he'll startle me too. Sometimes I'll find him stuffed into a kitchen cabinet or behind the toaster.  How rude is that??  I just put him back into the refrigerator so he'll do this......