Yesterday was such a nice day that we decided to drive up to Wisconsin and do a little caching.  We ended up finding 8 caches and got a DNF on 2 others.  I hate when we DNF (did not find) a cache.   One of them was one we had tried for before too.  I don't know what we are missing and it's so aggravating to not be able to find one.  But we'll be back.  Eventually we will find the little suckers!

We did several that I really liked.

The first one we did was a TB hotel and I dropped off 5 TB's that I'm moving along for other cachers.  The little yellow chicken one is a TB I picked up a couple of months ago.  The cache owner has little kids who like to see pictures, so I told the owner I'd hold onto it for awhile and take it with me over the summer.  That TB went back and forth to Kentucky several times, to Florida, to Colorado and to Wisconsin at least twice.  I dipped it in and out of caches and posted pictures for them and ended up putting a couple thousand miles on it.   The kids really enjoyed it.  They live in Wisconsin, so I finally dropped the TB off in hopes it will make its way back to them. 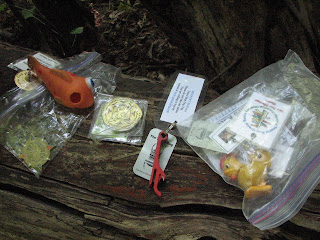 The next one was good too - it was a camoflagued PVC pipe, just large enough to hold swag items, TB's and a log book. 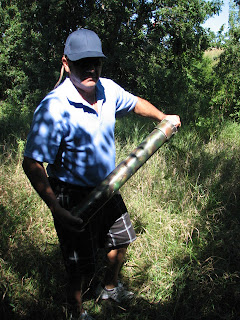 The next one was my favorite of the day.  It was hidden on the CO (cache owners) property.  It was a huge box, built to look like a birdhouse, complete with a bird hole in front with a nest sticking out.  The side of it opened up and there was a combination lock that we had to figure out how to open, based on hints on the geocache page. 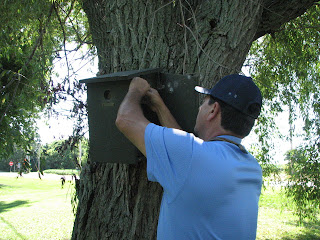 Once we figured out the combination, the door swung open and inside was an ammo box with the log book and lots of swag.  A seperate container held all the TB's.  Another container held the stamp for a letterbox if you were also doing a letterbox cache.  It was really nicely done. 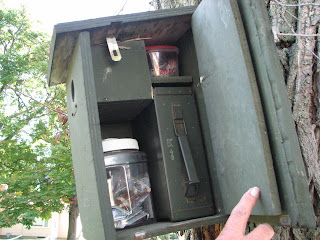 We did another cache that was located on a piece of land out in the country.  Orginally there was a house there, but suposedly the property was haunted and now the house is gone and all that remains is bits and pieces of the foundation.  All around this vacant piece of land there are industrial buildings and this sad little spot remains between them.  We saw 2 hawks flying over the cache location and lots of butterflies, but no ghostly sightings for us.  We did have some fun with the huge cement blocks that were scattered across the driveway.... 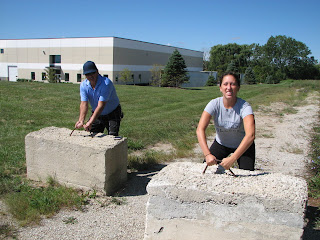 And we took a phooning photo! 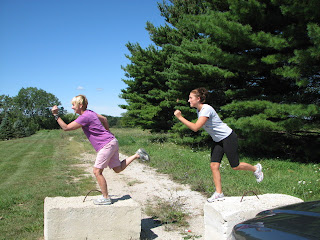 Our last stop was at a cemetery where the cache was hidden outside the fence. 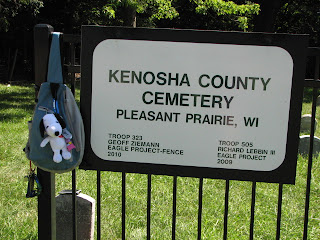 By then it was lunch time and when I'm in Wisconsin I will go out of my way to eat at The Brat Stop. 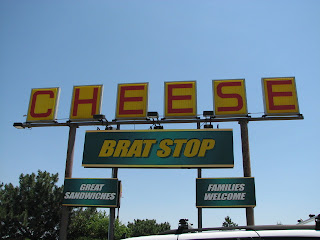 As we left the restaurant I ran smack-dab into one of my cousins.  He was there with his kids eating lunch too!  What are the chances of that?  We had a good laugh, chatted a bit and then we were on our way.  I wish I would have thought to take a picture of me and Billy.  Next time!

We jumped back into the car and headed to Kenosha, where we wanted to see The Civil War Museum.  I'll tell you about that tomorrow.
Posted by Kim@Snug Harbor at 9:58 PM