The folks over at Appalachia and Beyond are hosting the August Outdoor Blog Carnival on August 10th.  The theme is to write a post on your dream hike -  What are the sights, smells, sounds and tastes of your dream hike?
So, ok, my dream hike would be to hike the entire length of the Oregon Trail.  I’d like to walk it from the original starting off place of Independence, Missouri and keep on going the entire 2000 miles until I reached Oregon City, Oregon.
But I would want to do it with a twist…. because the more interesting question here is this…. Would I want to hike the trail now, in 2011, or would I rather hike it back at the time of “The Great Migration of 1843?”
1843 map

(maps taken from  http://www.historyglobe.com/ot/otmap1.htm)
During the year of 1843 it is estimated that between 700 – 1000 emigrants  left for Oregon.  Back then it took approximately 4 – 6 months to make the journey.  The pioneers had Prairie Schooners and carts to carry their supplies, but the majority of them walked the entire way.  A good day would see them travel 15 miles and a bad one would yield but 1 or 2 miles.

I wonder how much the landscape has changed in the past 168 years?  I would imagine that many of the major landmarks are pretty much the same, but what about the interstates and cities that have grown up in that time?  It would be interesting to see how much has interfered with the original trail.  Back then it was wide open prairies as far as the eye could see.  The pioneers just left Independence and followed their guidebooks across the prairie, the rivers, the valleys and the mountains.  They pretty much walked wherever they wanted.  Now there would be concrete and cars and private property and no trespassing signs to contend with.
In 1843 there was no such thing as a map or a GPS to guide the way.  The pioneers relied on their compasses and their guidebooks, for which they paid dear.  The Oregon Trail Guidebook was filled with valuable information like a hand drawn map of the trail, what landmarks to watch for, what type of clothing to bring and how much food to load up.
Today we have excellent waterproof items like backpacks with multiple zippers and pockets and uv protection shirts and wonderful trail pants that unzip at the knees and turn into shorts.  Back then the men wore flannel shirts and woolen undershirts and women wore dresses and skirts of cotton.   Think about the difference there has to be between the comfortable, light weight and waterproof hiking boots of today and the thick, clunky shoes of the 1840’s.  And personally I cannot see myself wearing a bonnet of any kind, so I am thankful there is such a wide variety of cool trail hats on the market today.
Let’s think about the differences at camp.  Today we can pop up a tent that sleeps 10 in a matter of minutes as opposed to sleeping on the ground underneath the wagon.  We have sleeping bags that are soft and comfy instead of a thin blanket.  Beef and buffalo jerky back then probably tasted like the shoe leather on the thick shoes the pioneers were wearing compared to the delicious teriyaki or hot spice of the jerky we enjoy today.   We may still gather wood for a fire, but I guarantee our methods of starting that fire are easier now than back then.  And I don’t know how I would feel about cooking my food over buffalo chips!   Cooking utensils and dinnerware were cleaned by scrubbing them with sand and drinking water was filtered by throwing a handful of cornmeal into the bucket and waiting until the dirt settled onto the bottom.  We've come a long way!
I think the thing that would have changed the least though is the landmarks themselves.  The pioneers would eagerly await their first sighting of Courthouse and Jail Rock as they were one of the first main landmarks along the trail. 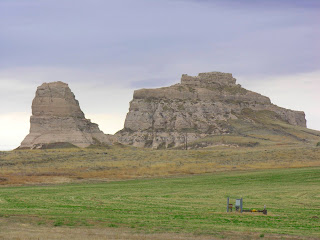 Located in Nebraska, they reached heights of about 400 feet and consisted of clay, sandstone and volcanic ash.  Pioneers would stop their journey and go out of their way to climb the rock and carve their names in the stone.
After that came Chimney Rock which is also in Nebraska. 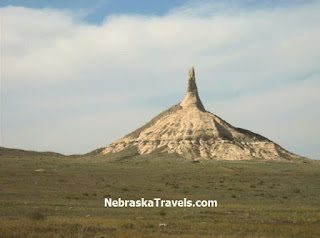 
Made of sandstone and clay, Chimney Rock rose 325 ft. above the prairie and was considered the most spectacular landmark along the trail.  Soon they would be watching for Ft. Laramie where they could stop to purchase supplies and mail letters back home.
Independence Rock was considered the halfway point and was nicknamed “The Great Register” because so many people signed their names on it. 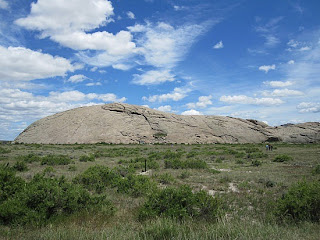 I remember reading about Independence Rock when I was in 4th grade and I've always wanted to go see it.  Fort Bridger, Ft. Hall and Ft. Boise were the next main stops and supplies became more and more expensive the further west they got. Once they reached The Dalles they were almost to their final destination of Oregon City.
So the question that tumbles around in my mind is still this – would I want to hike the trail as it is today…. or the trail back then?   Today we have mosquito repellent and I doubt we would have to contend with cholera, lice, malaria and scurvy.  And now the sound of a wolf howling at the moon is probably just a wolf howling at the moon and not an Indian talking in code to his buddy.  In some places along the trail there are ruts that were worn in the earth as high as the middle of the wagon wheels and I want to see them.  It’s been documented   that as many as 50,000 items were discarded along 20 mile stretches of the trail.  Wouldn’t you love to stumble across some old relics?
Is it easier to hike the trail now than it was back then?  I know that now we have better equipment that would make it more comfortable, but I think it would still be a challenge.  Today any of us can hike the trail because we want to, and not because we have to.  Hiking the trail now would not be the “make or break” decision that it was back then.  When the pioneers reached Oregon City they probably felt a sense of accomplishment and breathed a sigh of relief, but their lives were just beginning.   When I reach Oregon City I would also feel a sense of accomplishment and breathe a sigh of relief, but I would go back to my regular life and cross another item off my Bucket List.
I like to think that given the choice and a wave of the magic wand, that I would choose The Oregon Trail of then, of 1843.  I’d choose it for the obstacles and the unknown, the sense of wonder and the thrill. Could I take one more step when it wasn’t in me to take one more step?  I like to think I would.
Which Oregon Trail would YOU choose?
Don't forget to drop by Appalachia and Beyond on August 10th to read about other dream hikes.
Posted by Kim@Snug Harbor at 7:11 PM