This week we only hit 3 estate sales, but we managed to find a couple of goodies.  Sometimes I wonder what I like more - the thrill of the hunt or the actual finds.  What about you?
We like to play Domino's, especially when we're at the lake, so we picked up this set of Double Nine's.  The universe and I must be tuned in to Marshall Field's, because after last week's Marshall Field's tea tin, this week I came across one of their wooden crates.  It was pretty moldy and smelled really bad, but I have plans to clean it up, re-stain it, and then use it as a paper holder on my desk.  I also picked up a vintage Saltine tin.  Chablis lucked out a couple of weeks ago and got one for free from a lady at a garage sale, but I had to part with a dollar for mine.﻿ 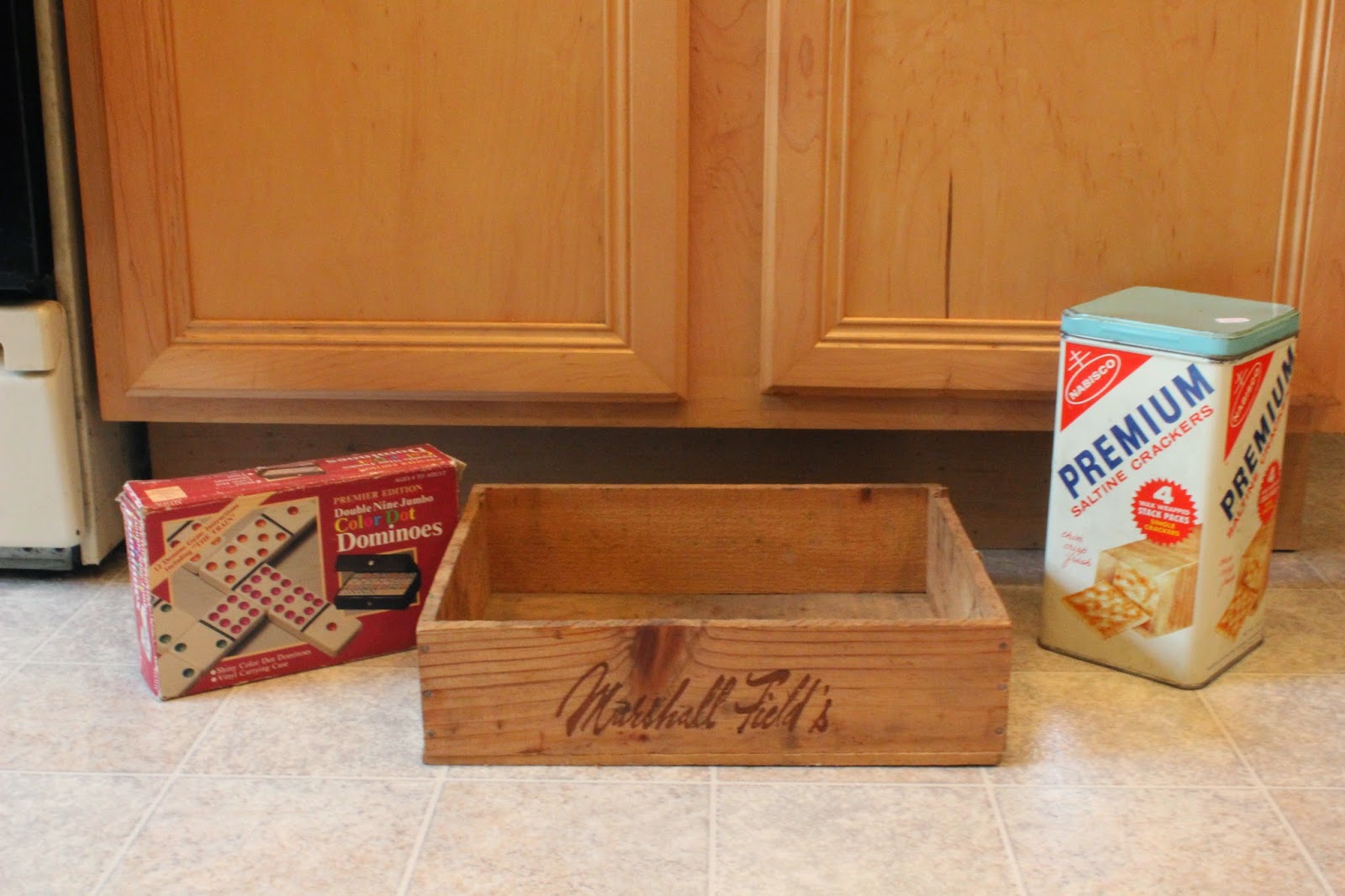 Chablis picked up the vintage Boys Scouts of America book that is in primo condition.  It's truly a beautiful book.  I got the Vera Scarf Tying book out of a free box, although originally they tried to get ten cents for it.  I wish they didn't ruin the front of the book by sticking that stupid 10 cents label on it.  Grrrr.....  And check out the cool Mrs. Wagner's Pies tin.  It was sitting on the bottom of a stack of cheap aluminum pie tins.  Honestly, I have no idea why I even looked through the pile of tins, but the minute I picked this one up, I knew I had a winner.  It's made of heavy metal and has a beautiful patina.  I looked them up online and found out that at one time the Mrs. Wagner's Pies Company was the largest bakery in America.  I did something kind of neat with the pie tin, but you'll have to come back tomorrow to see it.  Does anyone out there remember eating a Mrs. Wagner's Pie? 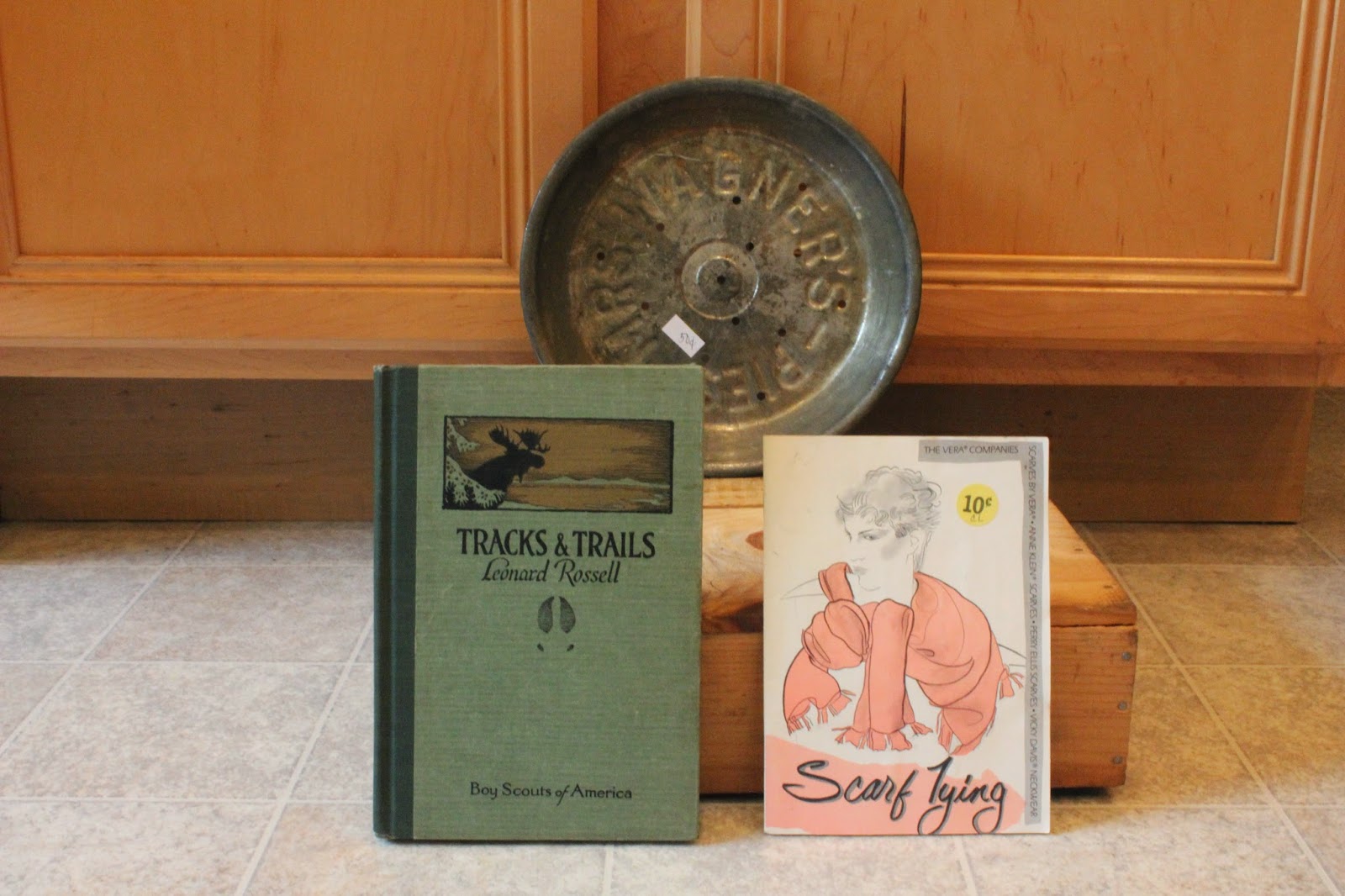 I found this Pantry Storage Jar up high on a shelf in an old work room.  I've never seen one like it, nor could I find anything on line about it. 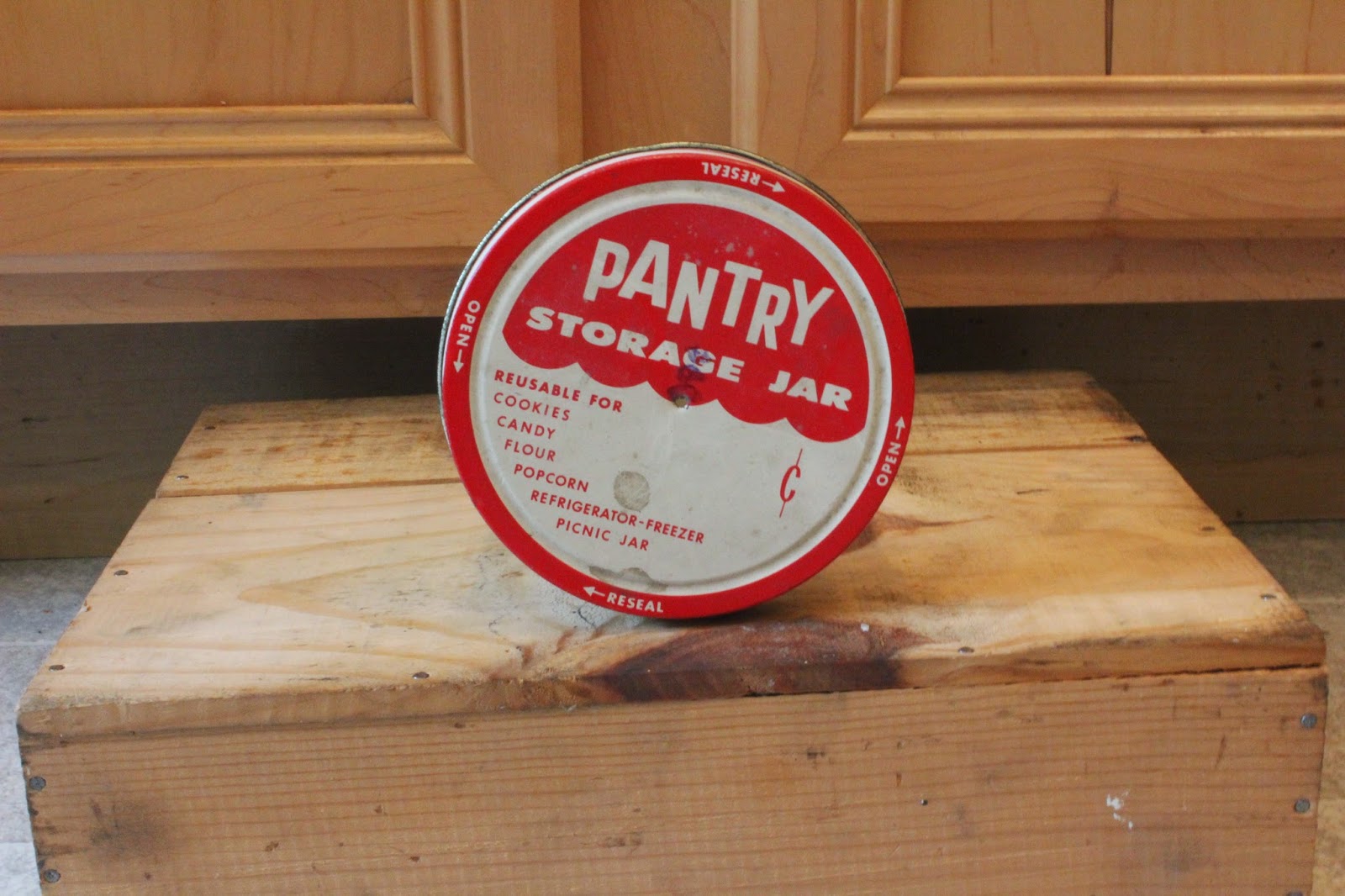 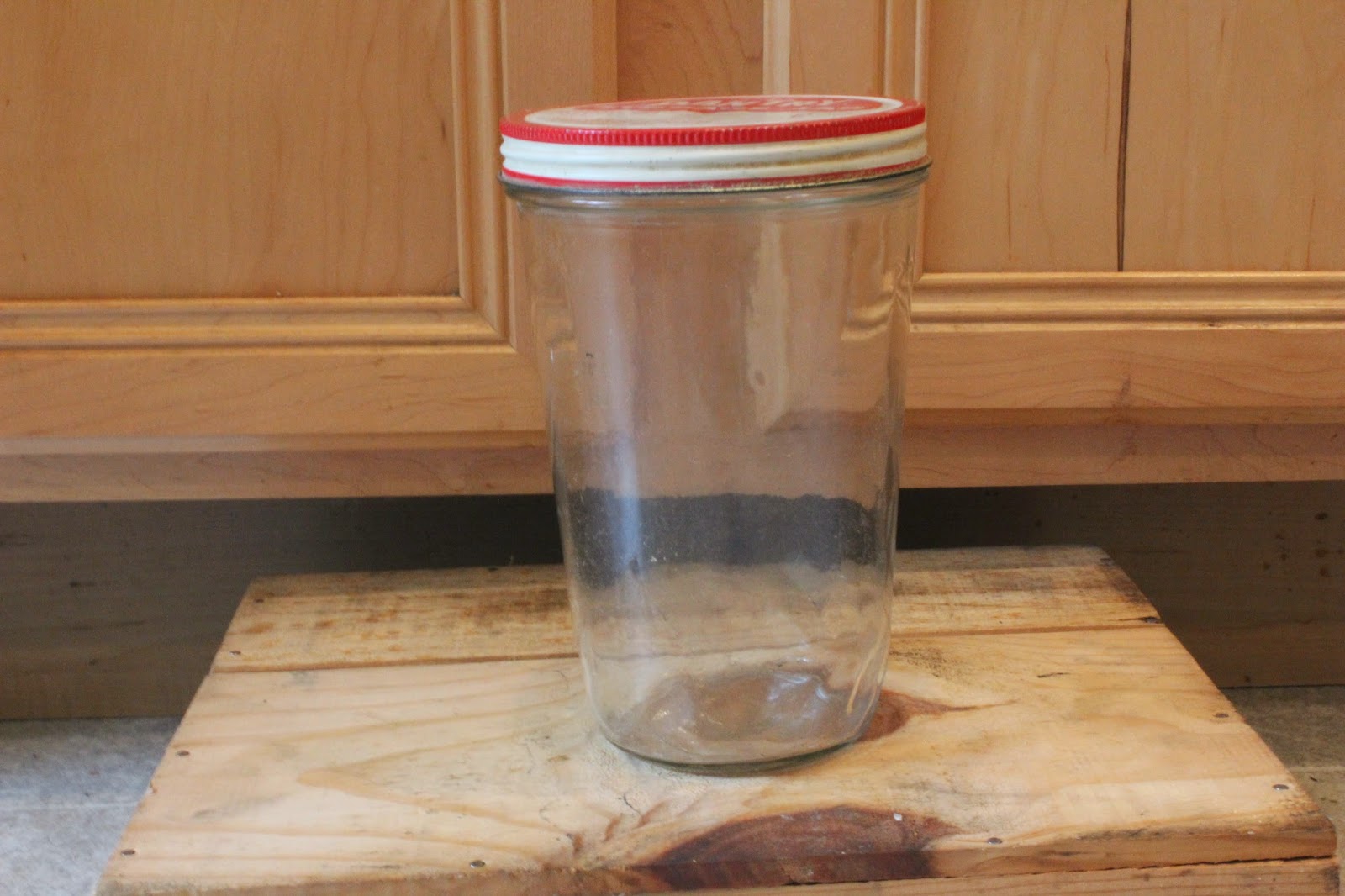 These ski patches were a great find.  There was actually a whole stack of patches, but I picked through them and grabbed only the patches for places I've actually skied at.  It's funny because at one time I had a few of these exact same patches (back in the late 1970's and early 1980's) and they were sewn onto my ski jacket.  Sadly those original patches were tossed out with the jacket.  This was a nice find and I'll display them in a picture frame.  The Ritz tin is rather new, but Chablis liked it and she bought it. 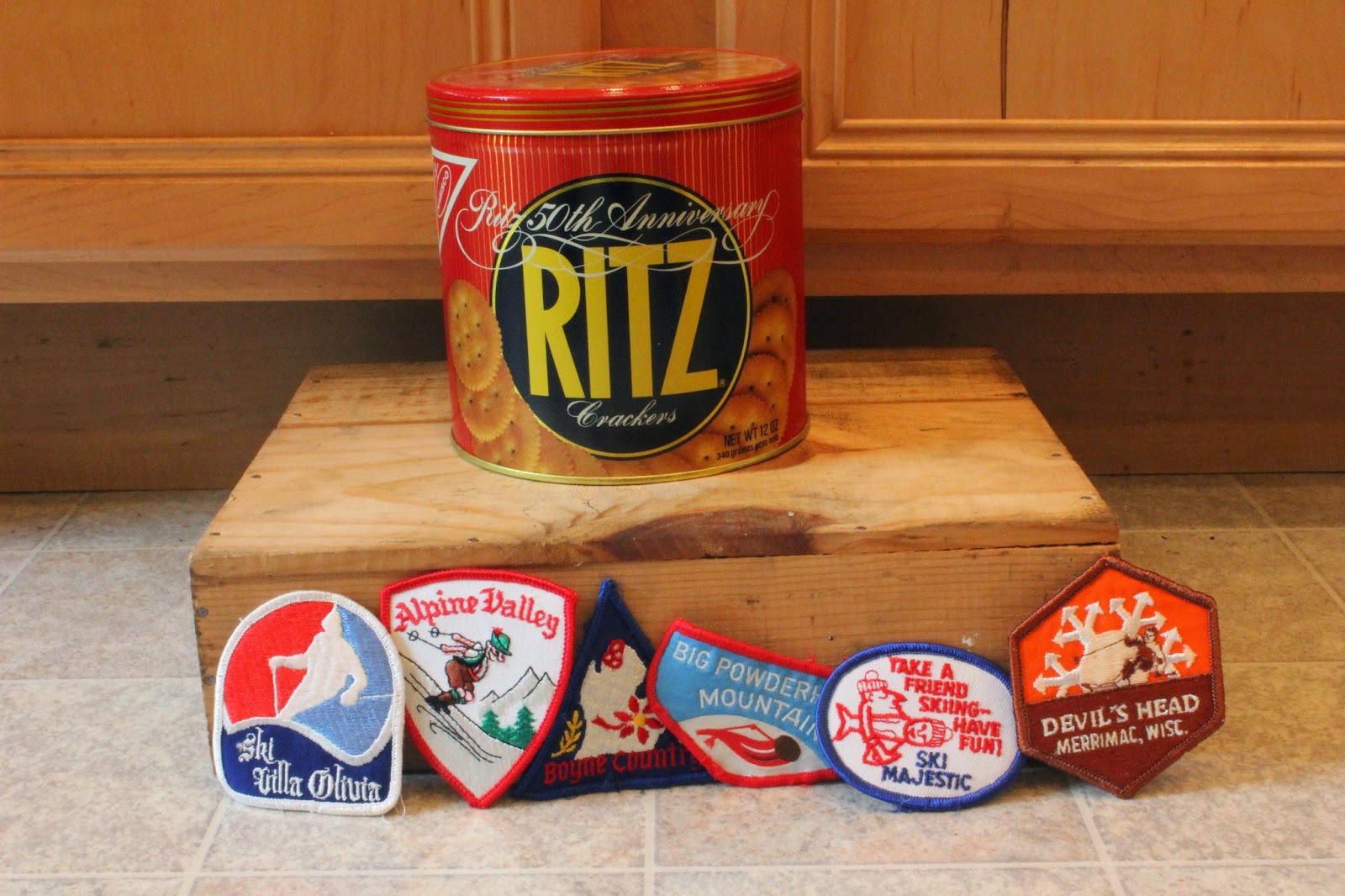 I fell in love with this apron.  I'm guessing it's from the late 1960's or early 1970's, based on the material.  I soaked and washed it and it cleaned up beautifully.  No stains either!  And yes, I will actually use it. 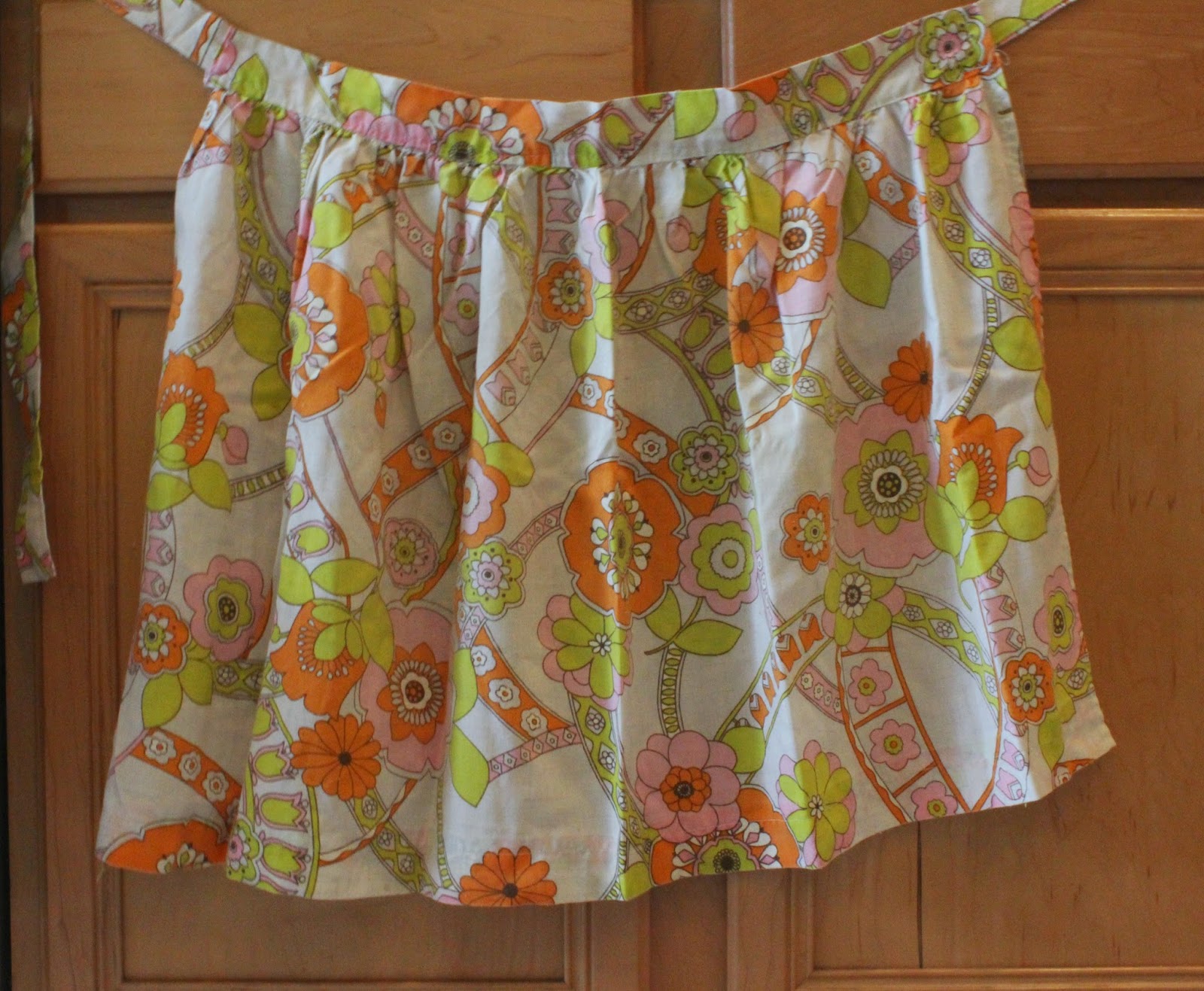 Chablis and I each bought a couple of these bottles.  The quart bottles are newer, but we took them since we can't get that size anymore.  I've never heard of Bireleys, Patio or Hi-Q soda, but the bottles are great looking.  My dad fondly remembers Bireley's soda and he said "Birelys pop was my favorite pop as a kid.  The short squat wide mouthed bottles were quite different from all the other pop bottles.  The pop was a non-carbonated, fruit flavored drink that came in orange, grape, raspberry (my favorite), and lime."  My mom has some Bireleys memories too.  She reminisces, " Mine was grape. Bought it at the corner candy store.  Lots of those types of stores on neighborhood street corners.  Ours was Mr. Braun's. His was more like a garage building set next to the alley, across the alley from Auntie Barbara's house. Sold mostly ice cream, candy and probably stuff like bread. I always got my bubble gum there, if you could get it during the war.  About 6 houses down from our house and we always walked through the alley."    I was glad I picked up a bottle that had such fond memories for both of them. 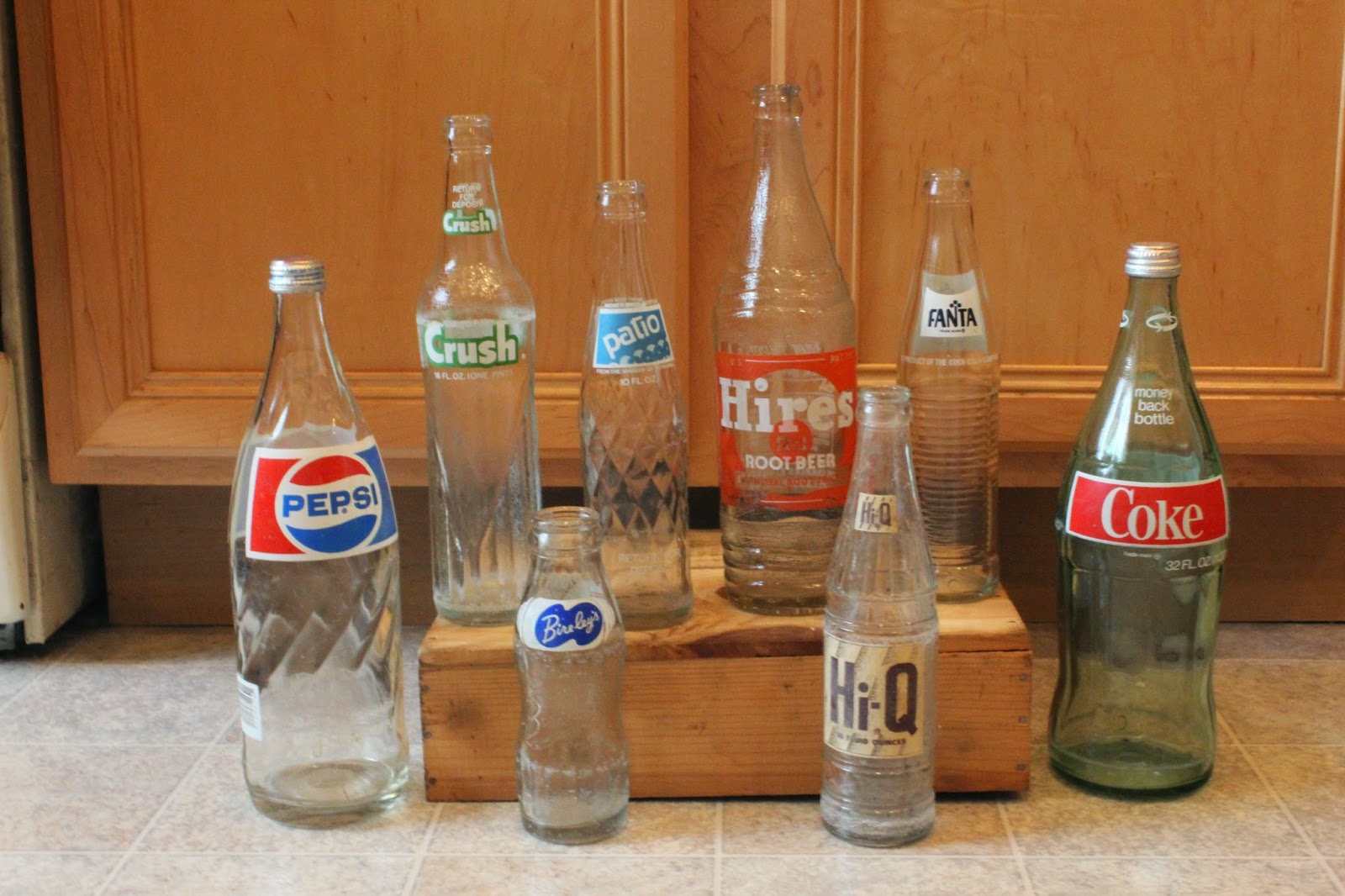 I love, love, love this printers tray.  It's in pretty rough condition, but I've always wanted one.  My friend Moira has one she's going to give me if I ever get my ass out to her house to pick it up, but this one was such a great price that I had to take it.  I have plans for this one anyway. I really think I want to try to make a table out of it.  Wouldn't that be awesome?  I've already cleaned it up and started to stain it.  We'll see how it goes.   I've never built a table before, but I kind of have it in my head what I want to do.  Hmmm.....
﻿ 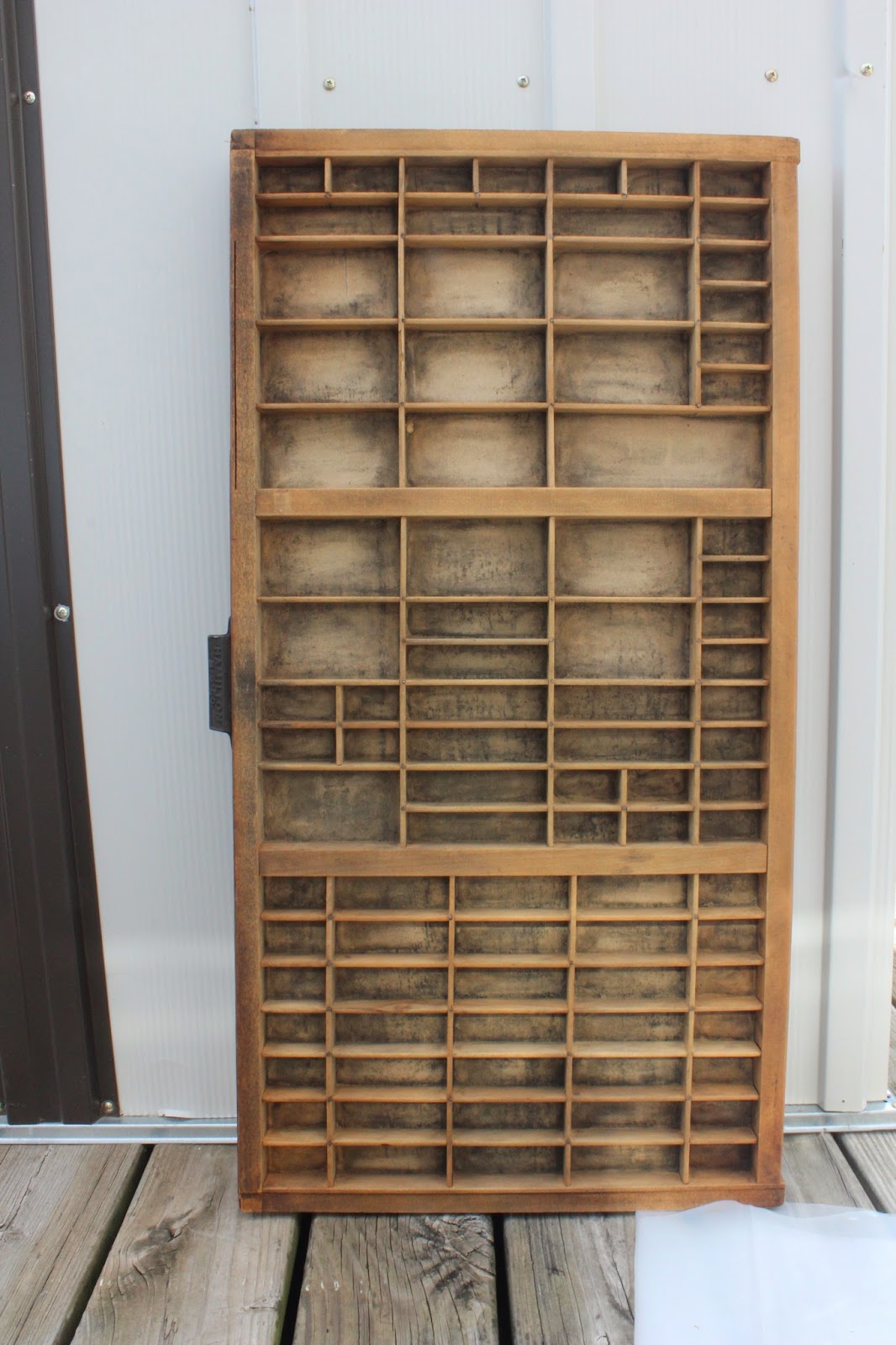 And last, but not least is this cute little chest.  We were up in Racine, Wisconsin on Sunday and we happened to drive past a yard sale and since I put on the pout face, Louie felt obligated to stop.  They really didn't have much in the way of good junk, but Chablis spied this chest over-flowing with the grimiest, most crappy looking baseball caps I've ever seen.  Honestly, who would try to sell old nasty baseball caps?  But the chest was awesome.  It needs to be cleaned up but it's well built and solid, and it has fantastically aged hinges and clasps.  I dumped the caps out onto a tarp and took the chest up to the lady and asked her how much she wanted.   When she said a buck, I didn't bat an eye.  A buck!!! I handed over the dollar, thanked her and happy danced all the way back to the car.  I have very special plans for this chest but I can't say what. 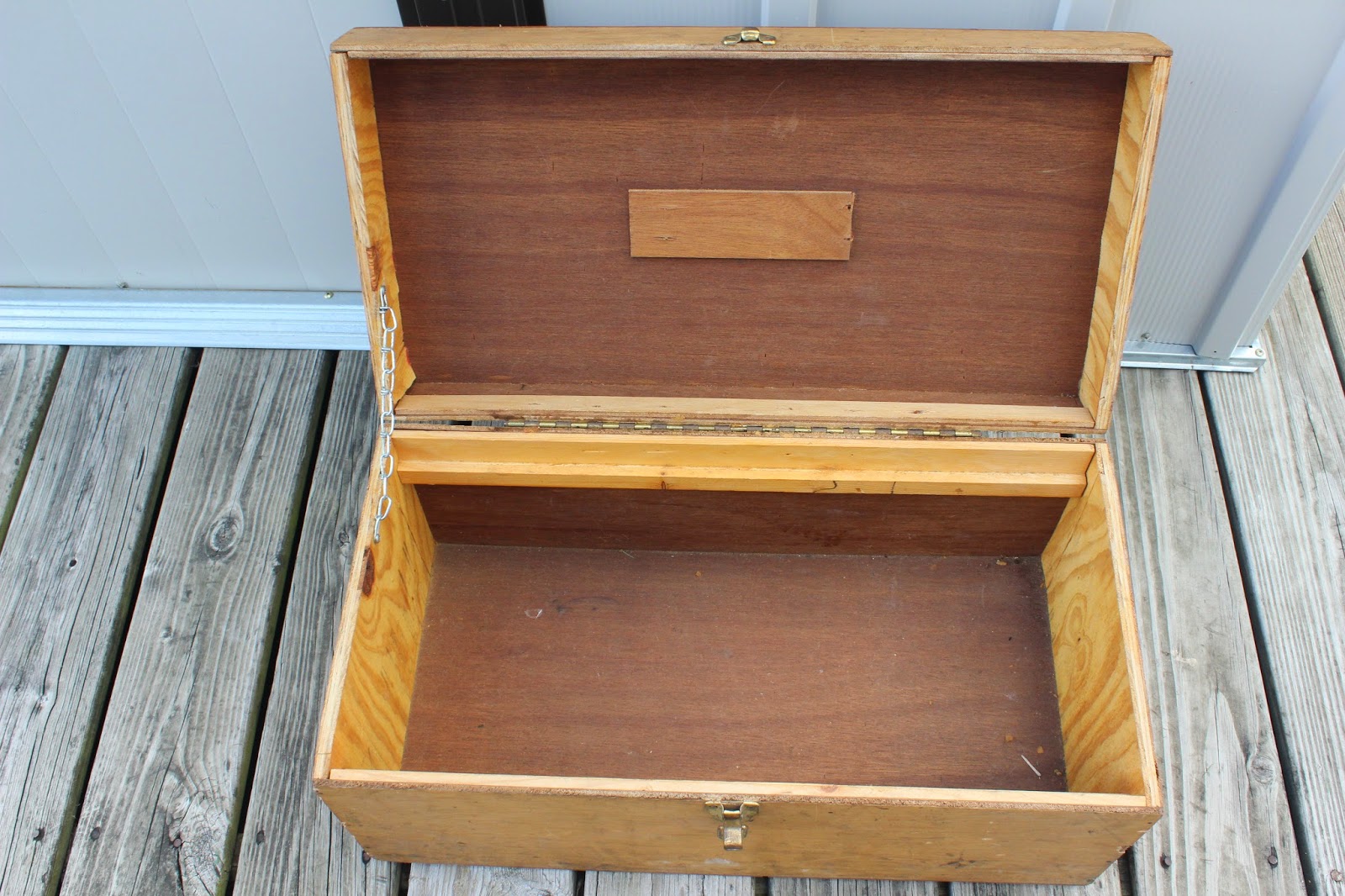 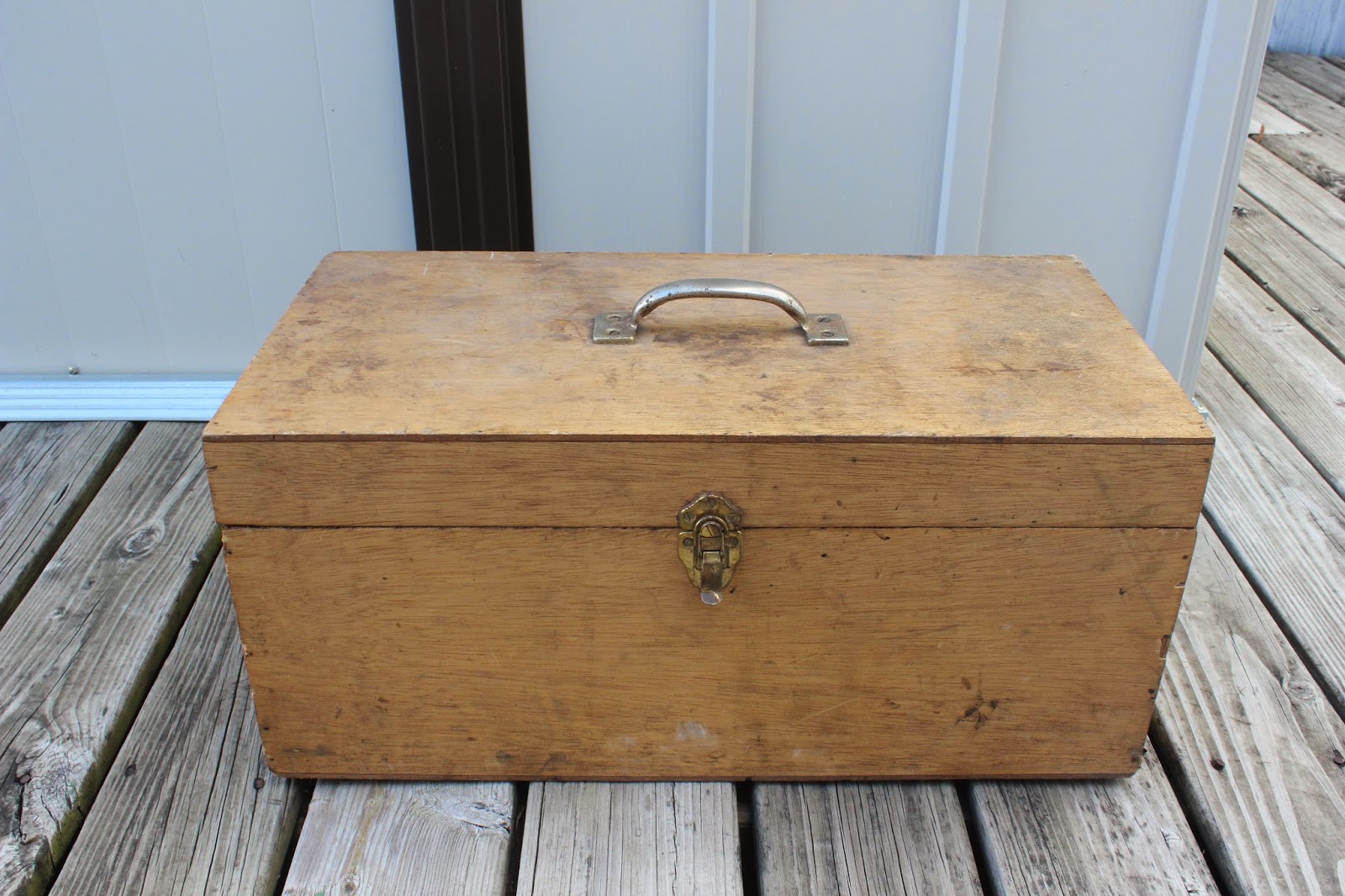 
Linking up with:
Revisionary Life﻿
Posted by Kim@Snug Harbor at 12:00 AM