Sanibel with The Girls - Hinkle!

This year I had the pleasure of hanging out on Sanibel Island with 2 of my best girlfriends.  Meet Moira and Traci.  We've been trying for 3 years to schedule a trip together and this year the planets finally aligned so we could do it. 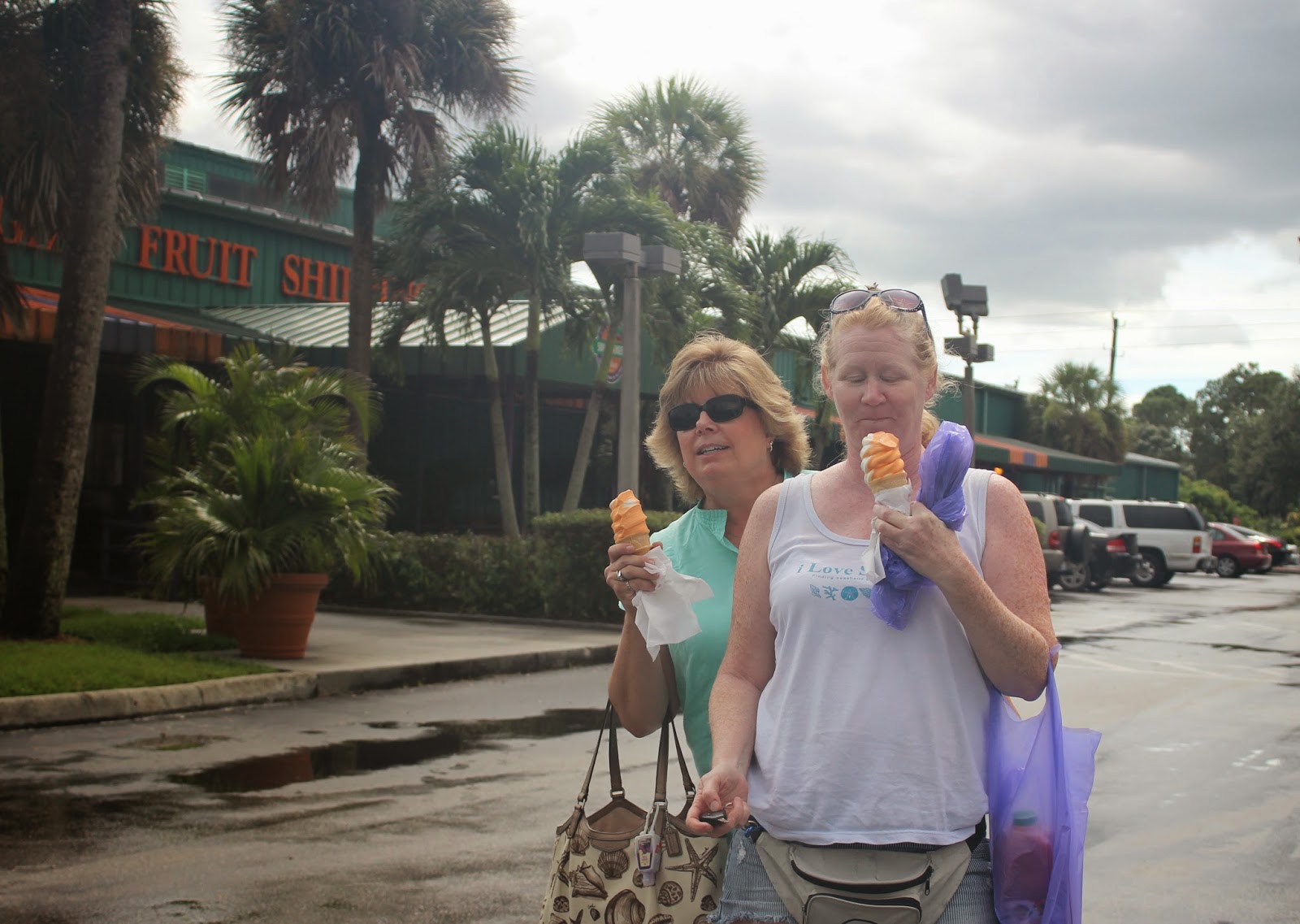 Our trip started out with a bang when I saw a celebrity at the airport.  While they were herding us through security at O'Hare, I got routed to one line and Moira to another.  My line was moving much quicker and as I went through the sensors, I glanced to my right and saw actress Melissa McCarthy going through the sensors right next to me.

I love Melissa McCarthy - I think she is hysterically funny.  Since I didn't have to remove my shoes I got through the gate first and threw my back pack on the ground, and fumbled through it for my cell phone where I managed to snap a quick photo of her while she was pulling on her gym shoes.  Before I could blink she was walking right towards me....  OMG - what do I do, what do I do?  So I just smiled and said, "Hello Melissa."  She looked right at me and smiled back at me with that big beautiful smile of hers and said hello right back.  Then I gushed, "Thank you for doing what you do.  I just love how you make me laugh."  And just a nice as can be she said, "Well thank you very much."  Then she made a bee line towards the golf cart that was waiting to whisk her away to her plane and away from the crazy lady -me.   I don't care - it was exciting to see her and she was sweet as can be and Moira was all mad because she missed it all since she was stuck in the slow ass security line taking off her shoes and getting frisked.  LOL!!

Traci had already arrived on the island 2 days earlier, so she picked us up at the Ft. Myers airport and we headed over to Sun Harvest for ice cream and various bottles of juice.  I can't believe that in all the years I've been going to Florida, that I've never been to Sun Harvest.  Who else has stopped there? 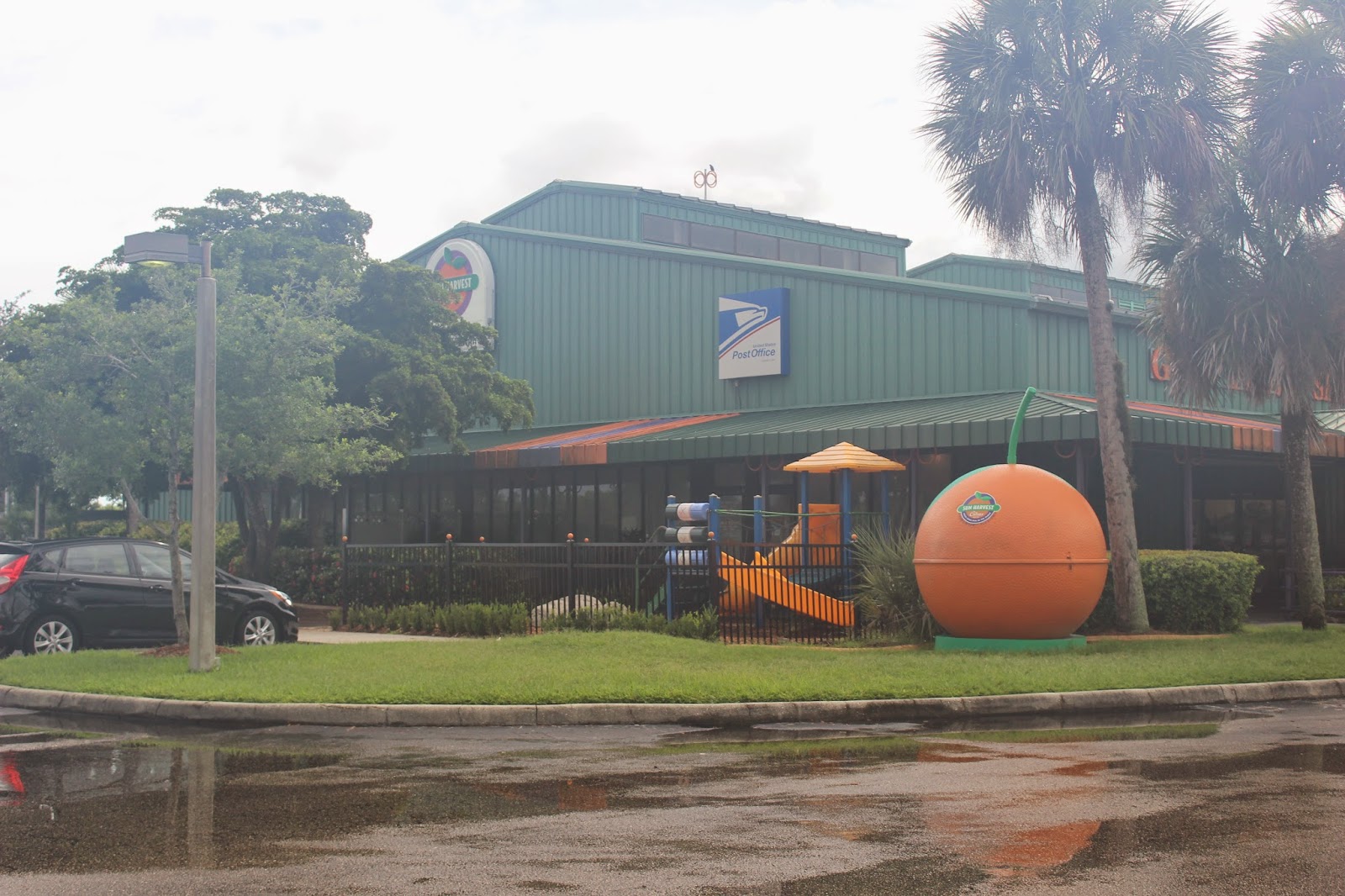 Next we made a quick stop at Bunche Beach to check out the low tide.  We found hundreds of King Crowns, but all of them had critters living in them.  Moira was determined to find a Kings Crown on this trip.  It's been on her wish list for a long time.  We gave up after an hour and headed over to Sanibel where the first order of business was stopping at Schnappers for dinner.  Look at us - we are so happy to finally be on Sanibel together! 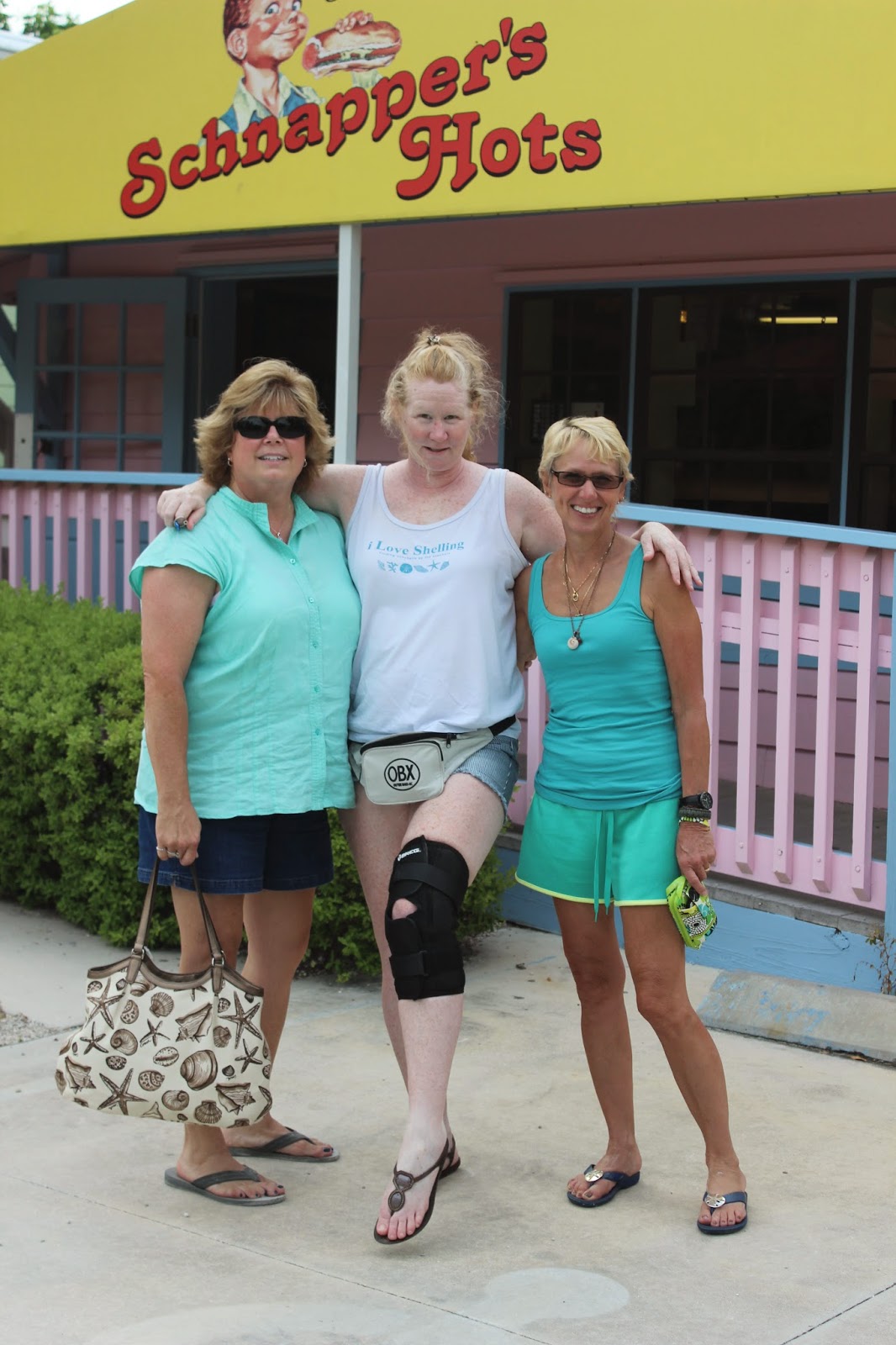 Schnappers is my island tradition and I got my usual order of chicken wings and french fries.  We were greeted with a smile by Ju at the counter.... 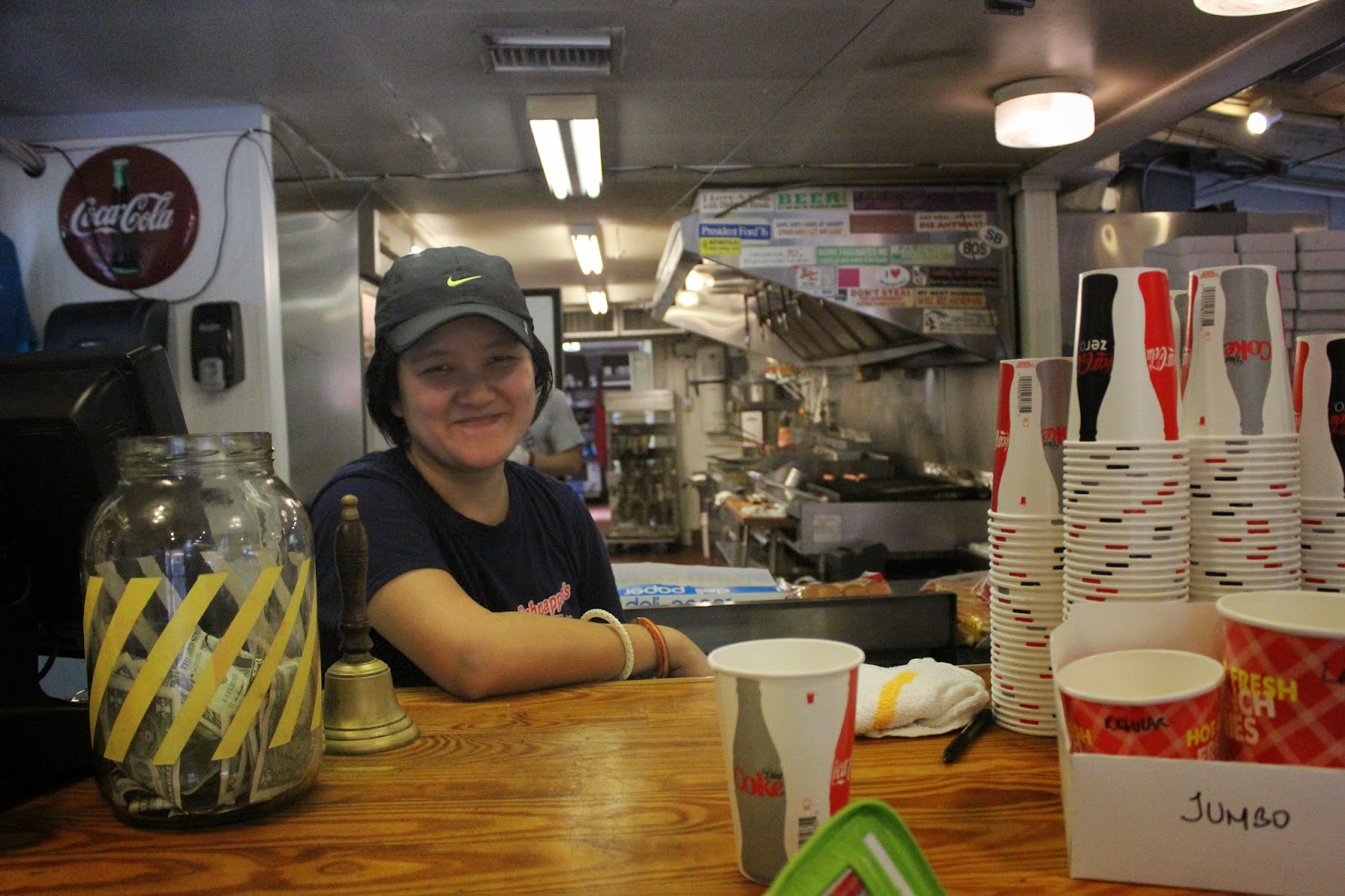 It was Moira's first experience at Schnappers and I think she will be back! 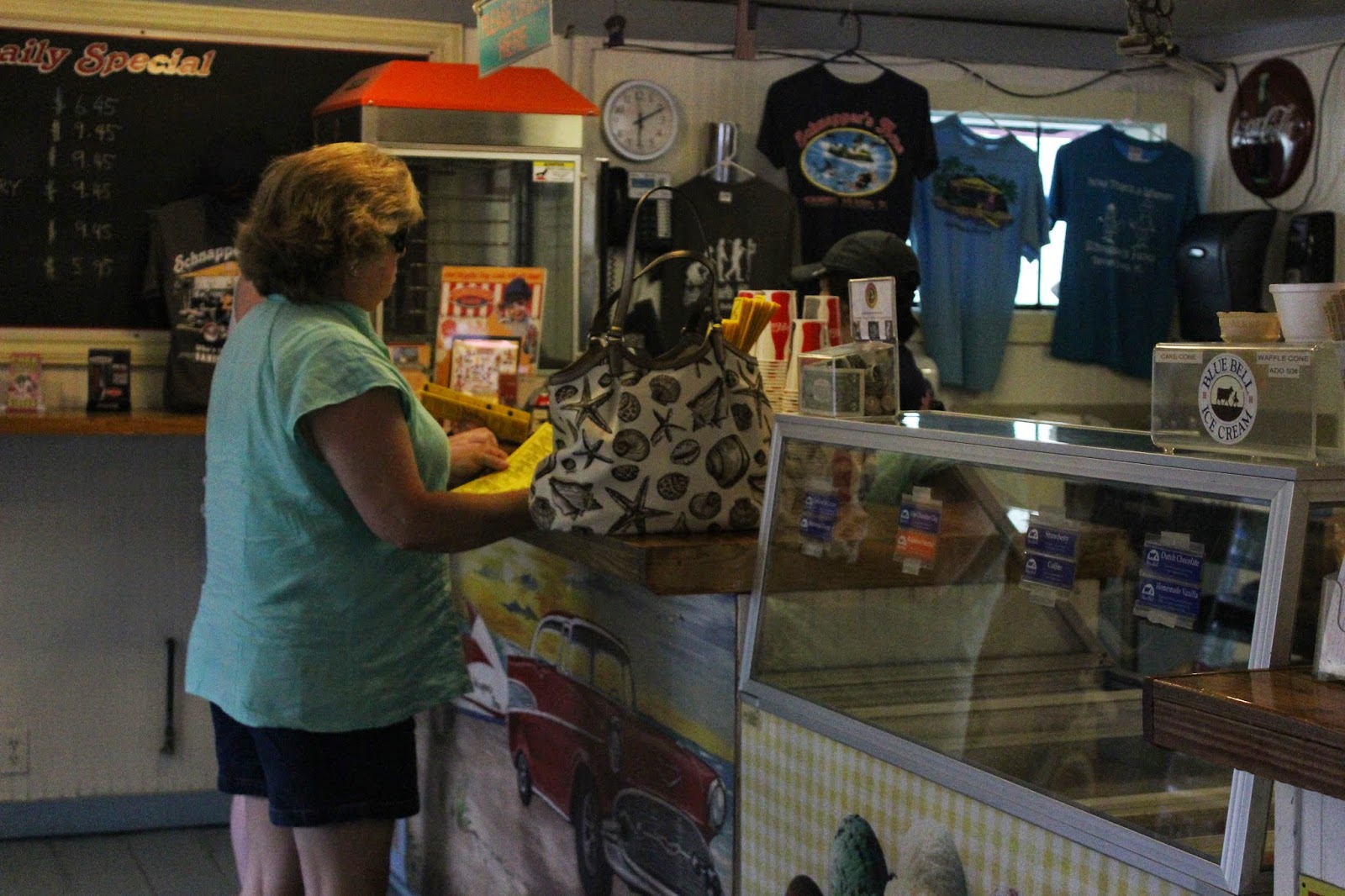 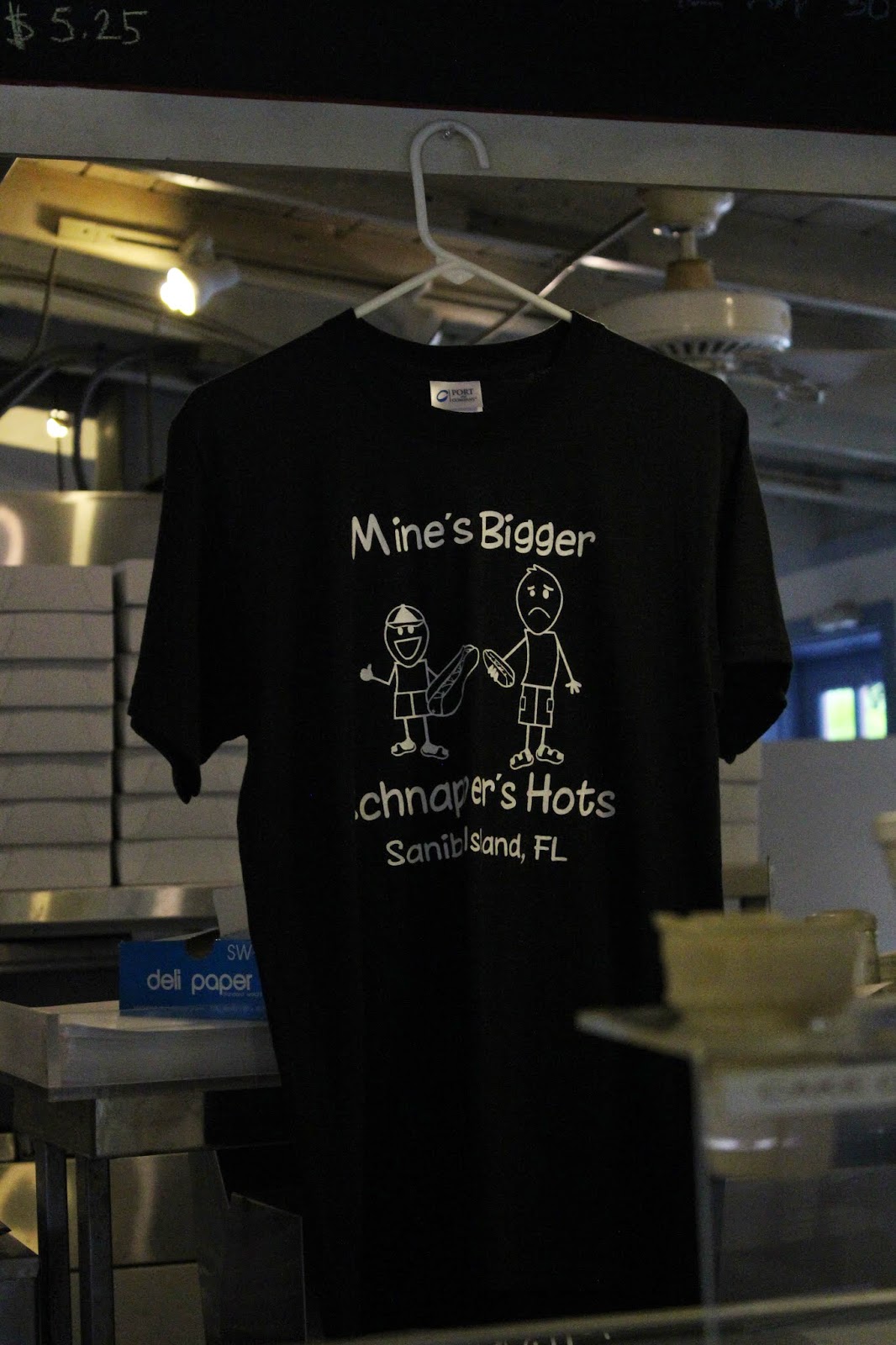 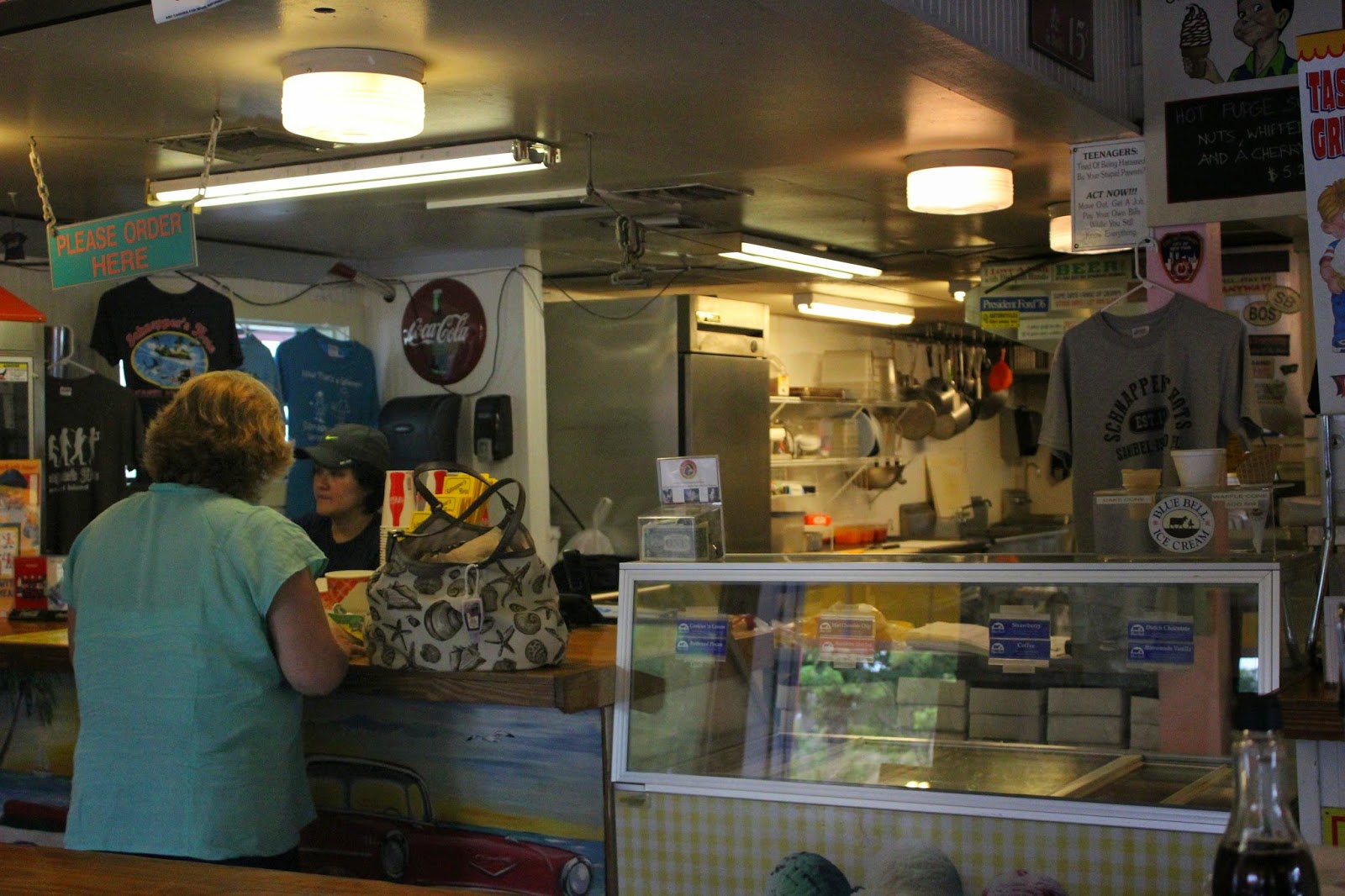 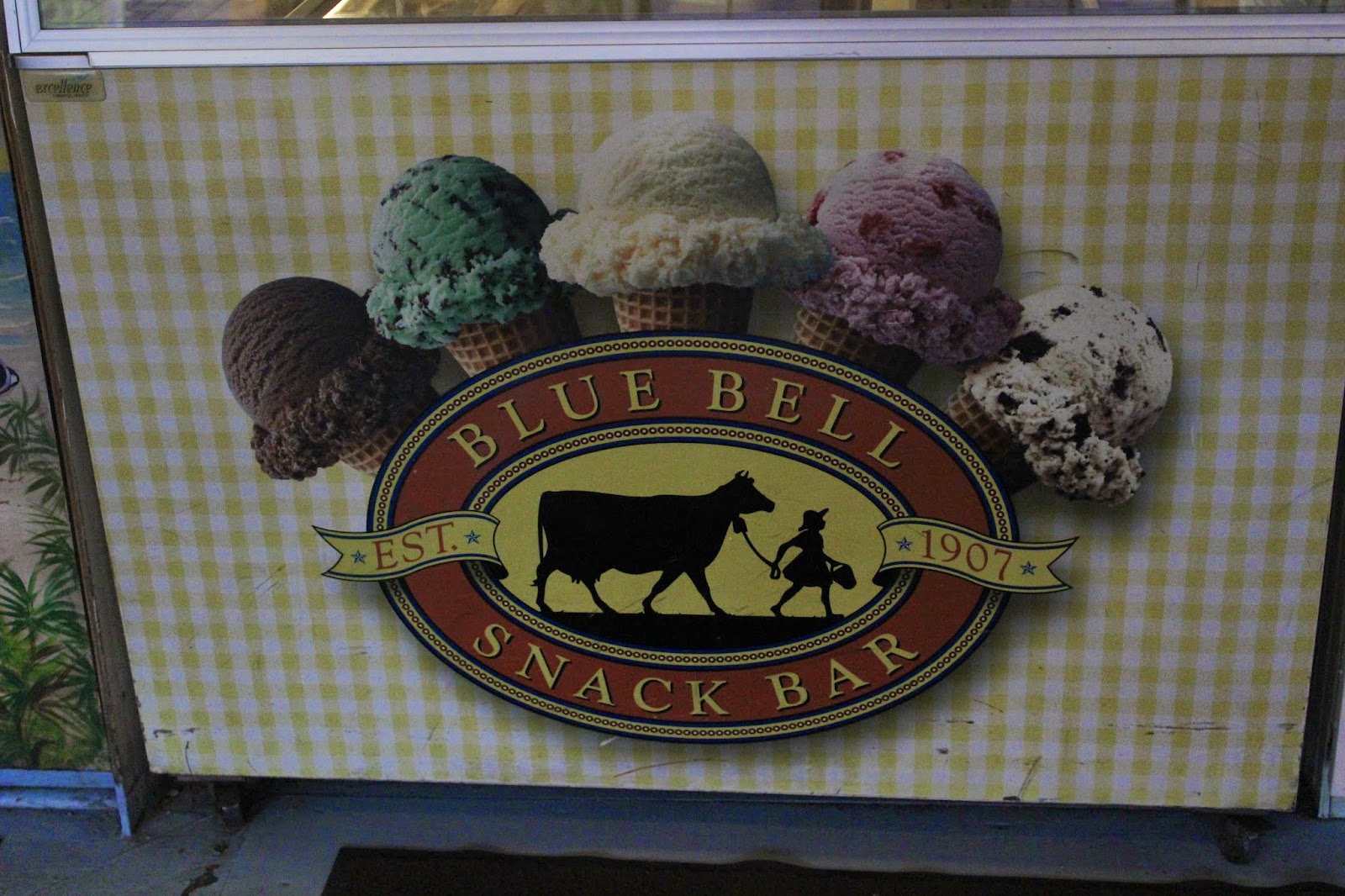 We drove down to the condo and after dinner we had gift time.  Moira had 2 huge baskets shipped down for us, filled with all kinds of beach toys, insect repellent, shelling tools, photo albums and stickers.
﻿ 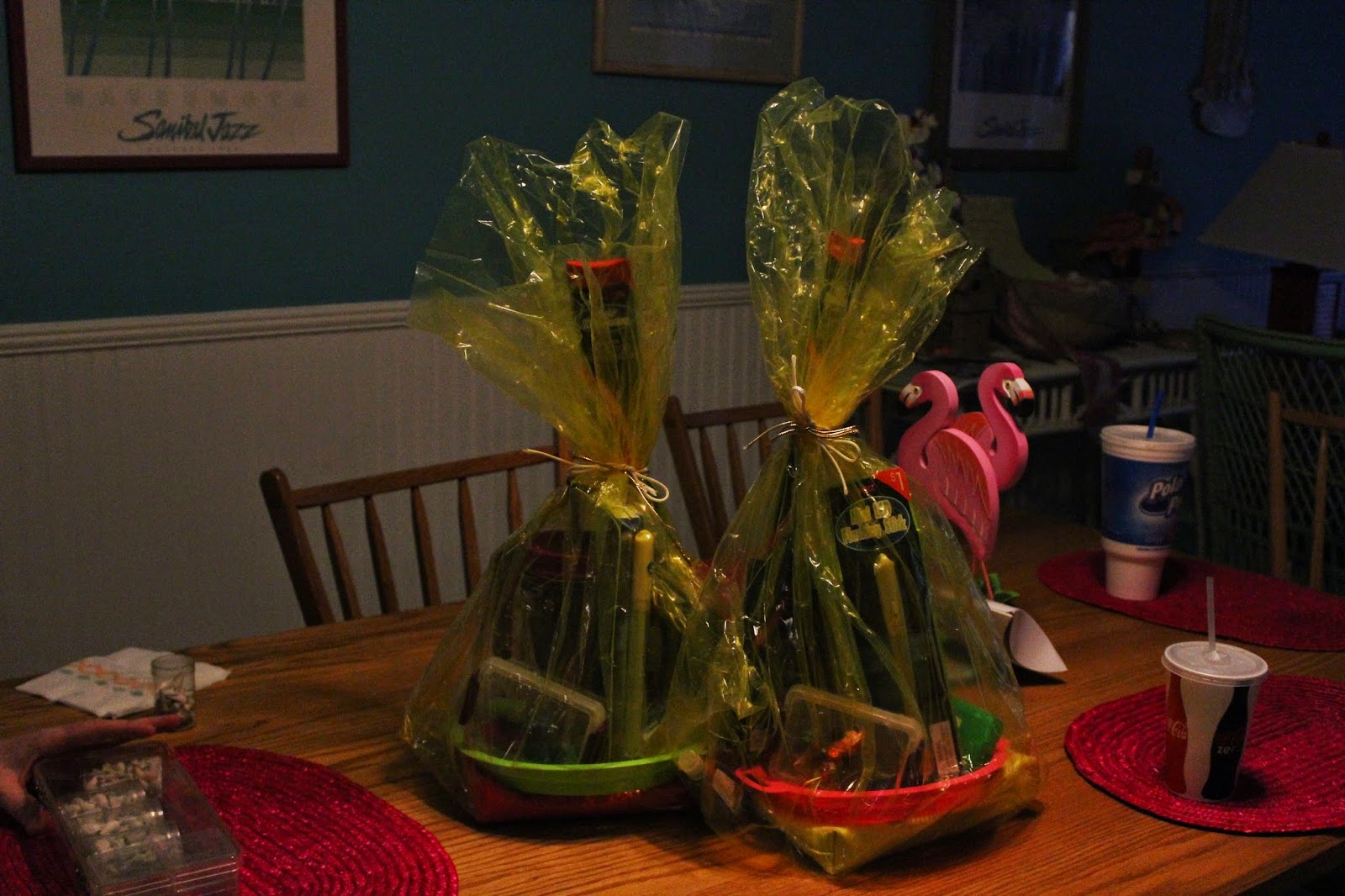 She also designed tee shirts for each of us to commemorate our big trip.  We nicknamed it Hinkle 2014.  "Hinkle" refers to a little joke we have between the three of us due to the fact that FB auto corrected something by mistake once.  Silly, I know, but sometimes it's fun to have a crazy little joke just between you and your girl friends, isn't it? 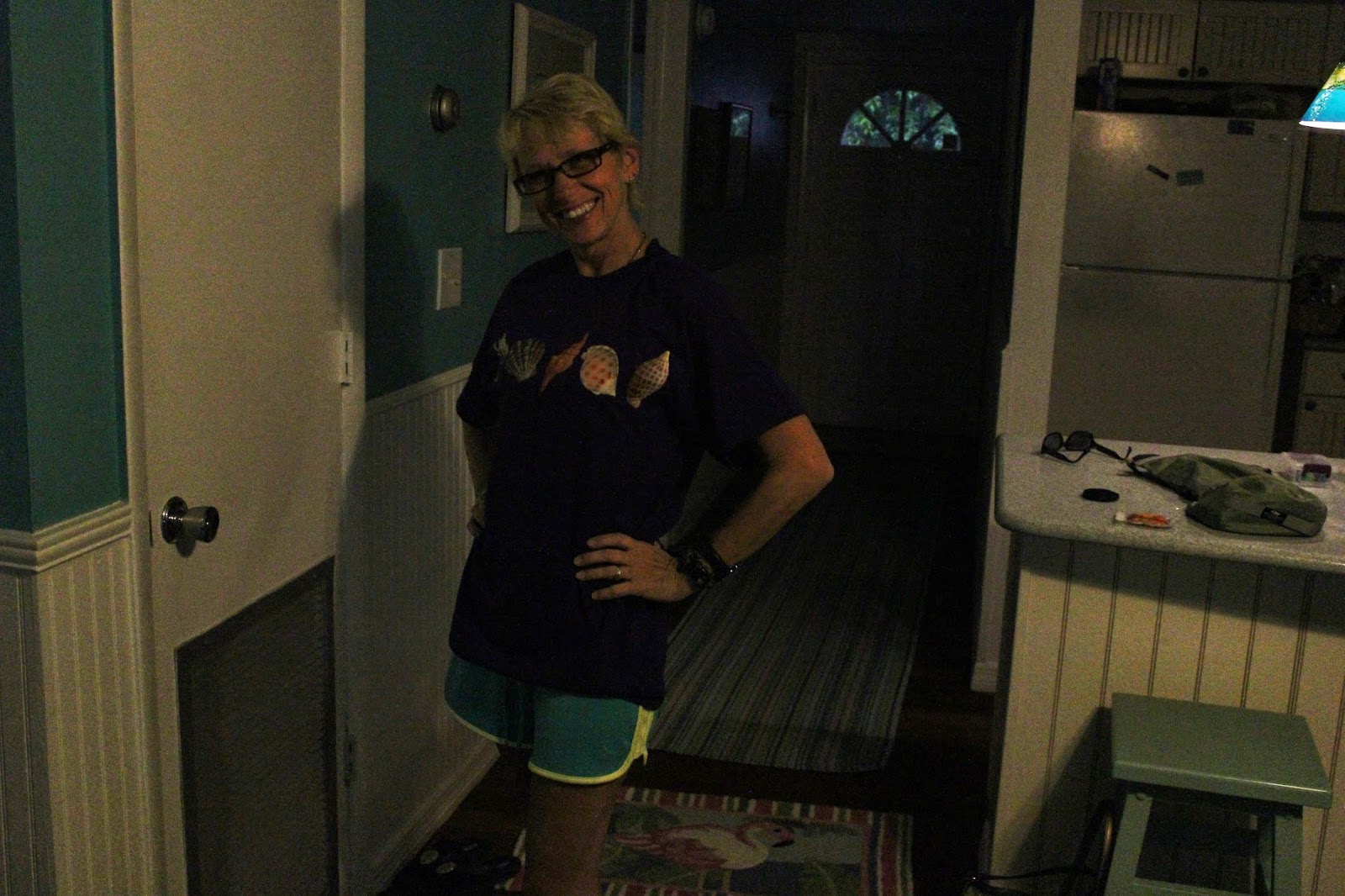 Traci had been on a massive shelling adventure for 6 weeks up and down the east coast, and she made each of us a special container filled with unusual mini's.  Sweet! 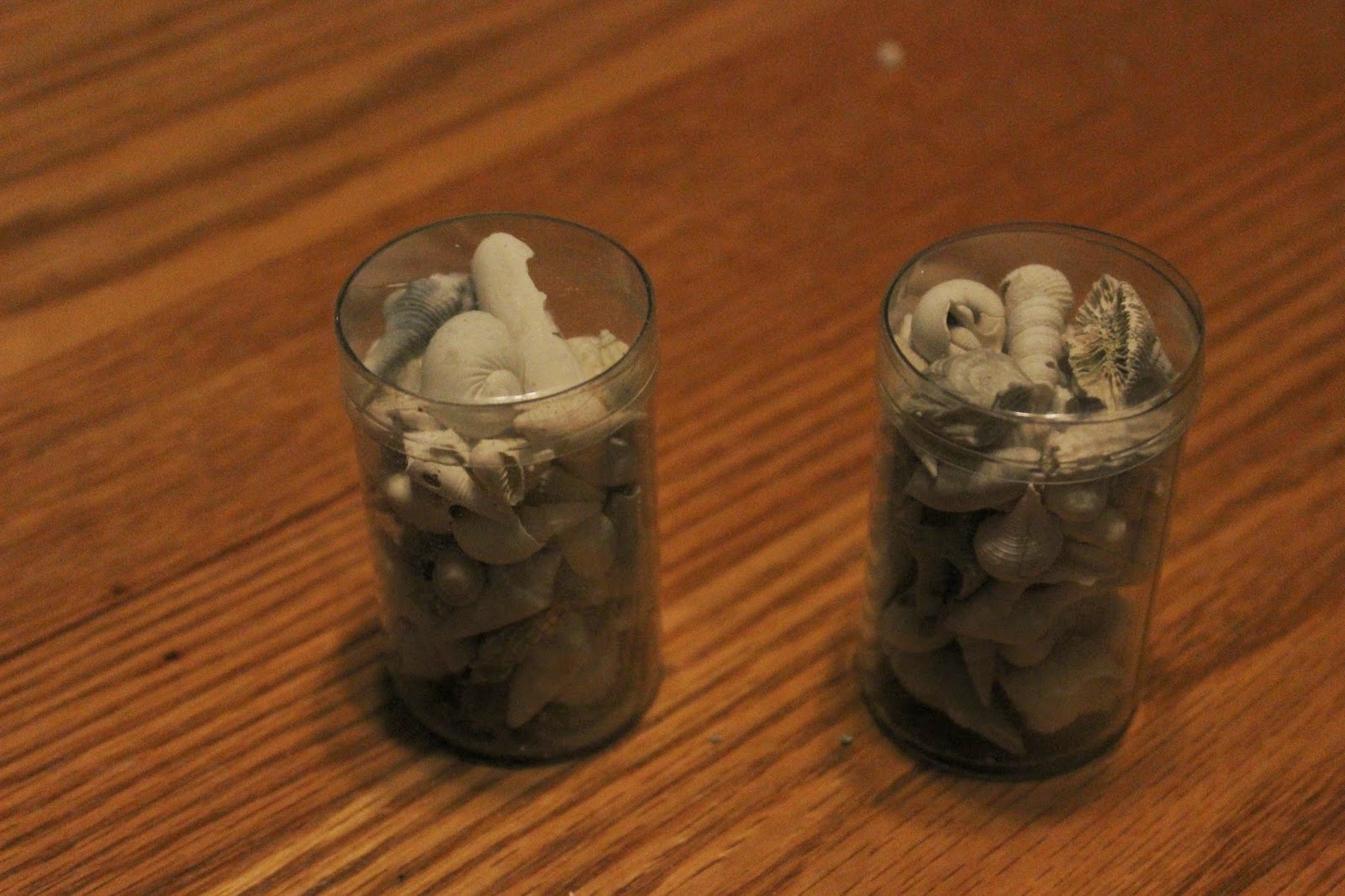 Our mutual friend Della, from over at Del's Shells got in on the fun and sent us each a hand crafted bookmark.  Aren't they pretty?  Thanks Della!!   xo  And I brought stuff for us to make olive bracelets and silver charm ankle bracelets, but I forgot to take a photo - ooops! 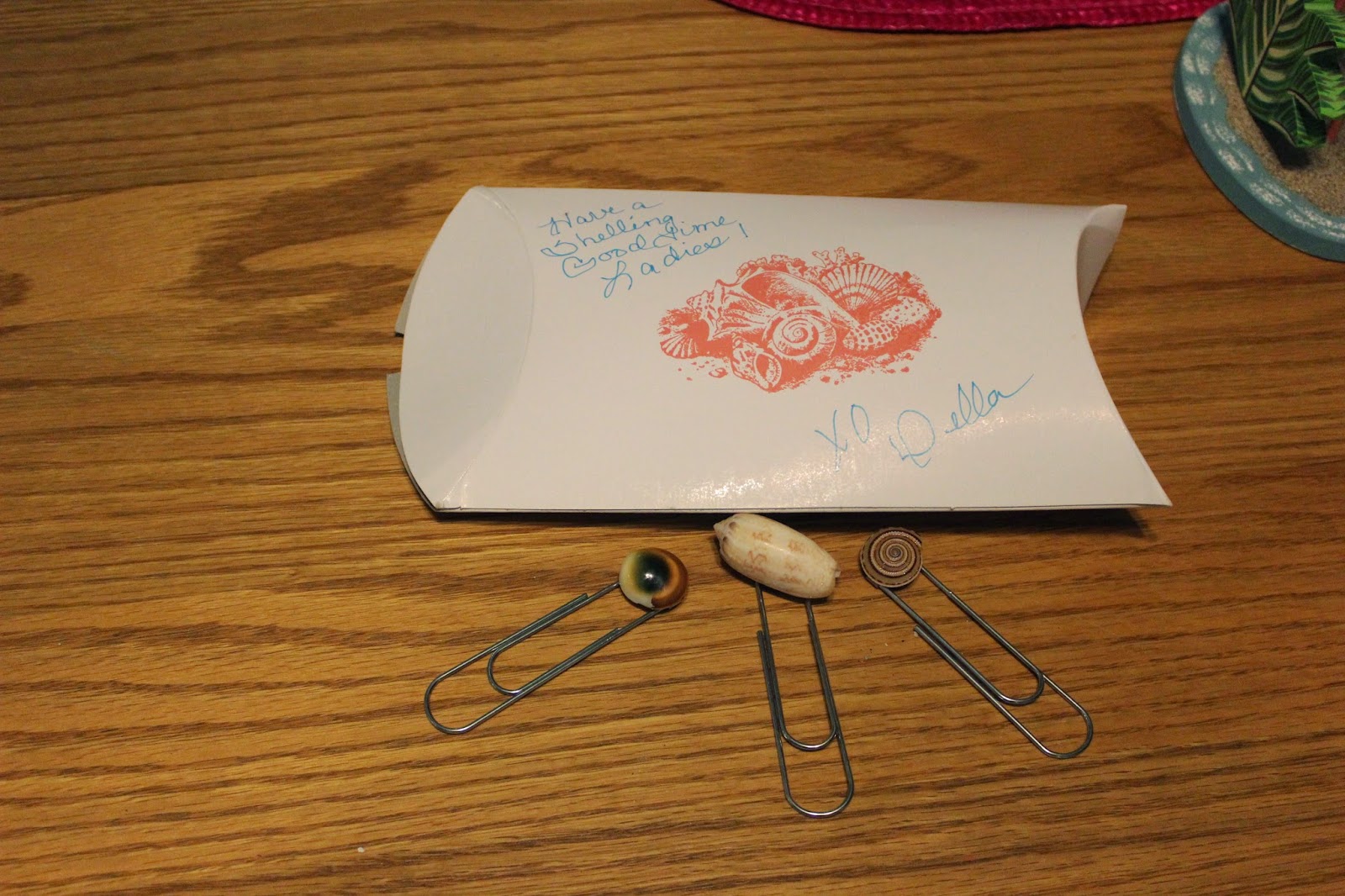 By then it was getting close to sunset, so we scooted out to the beach for a little shelling and sunset watching.... 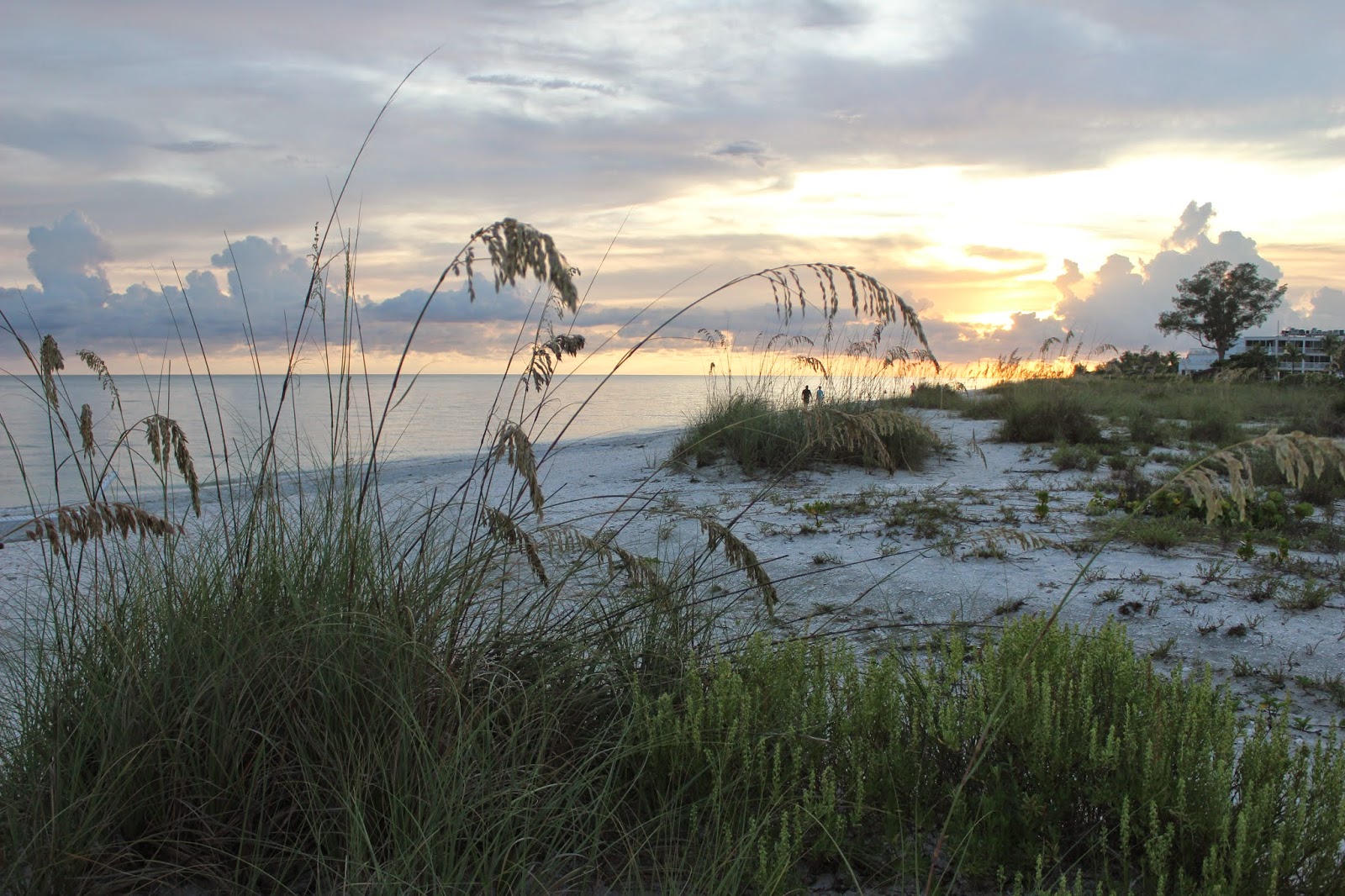 There were a lot of shells on the beach, but we really had to pick through them to find some good ones.  Check out the sunset tho.... 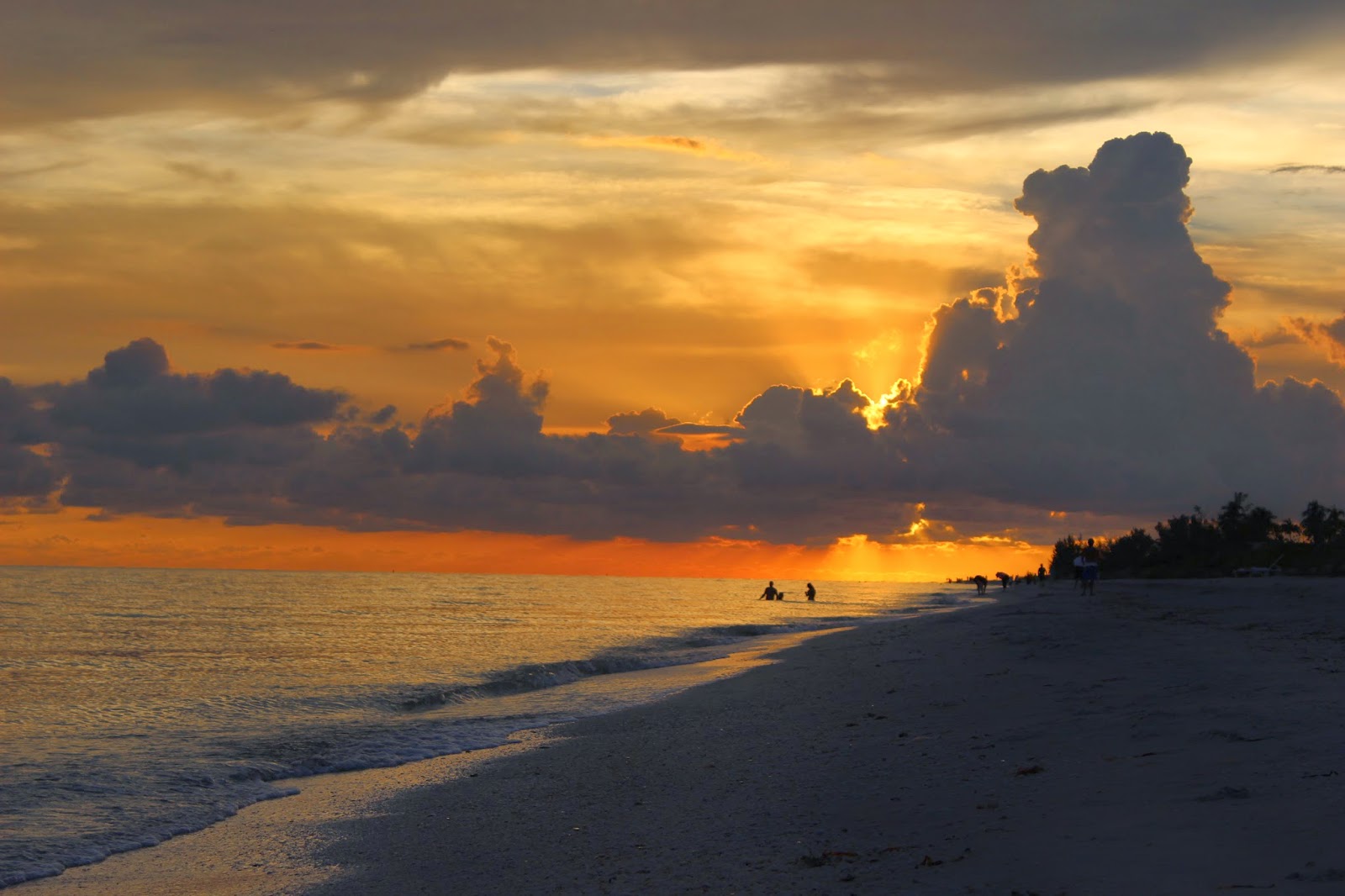 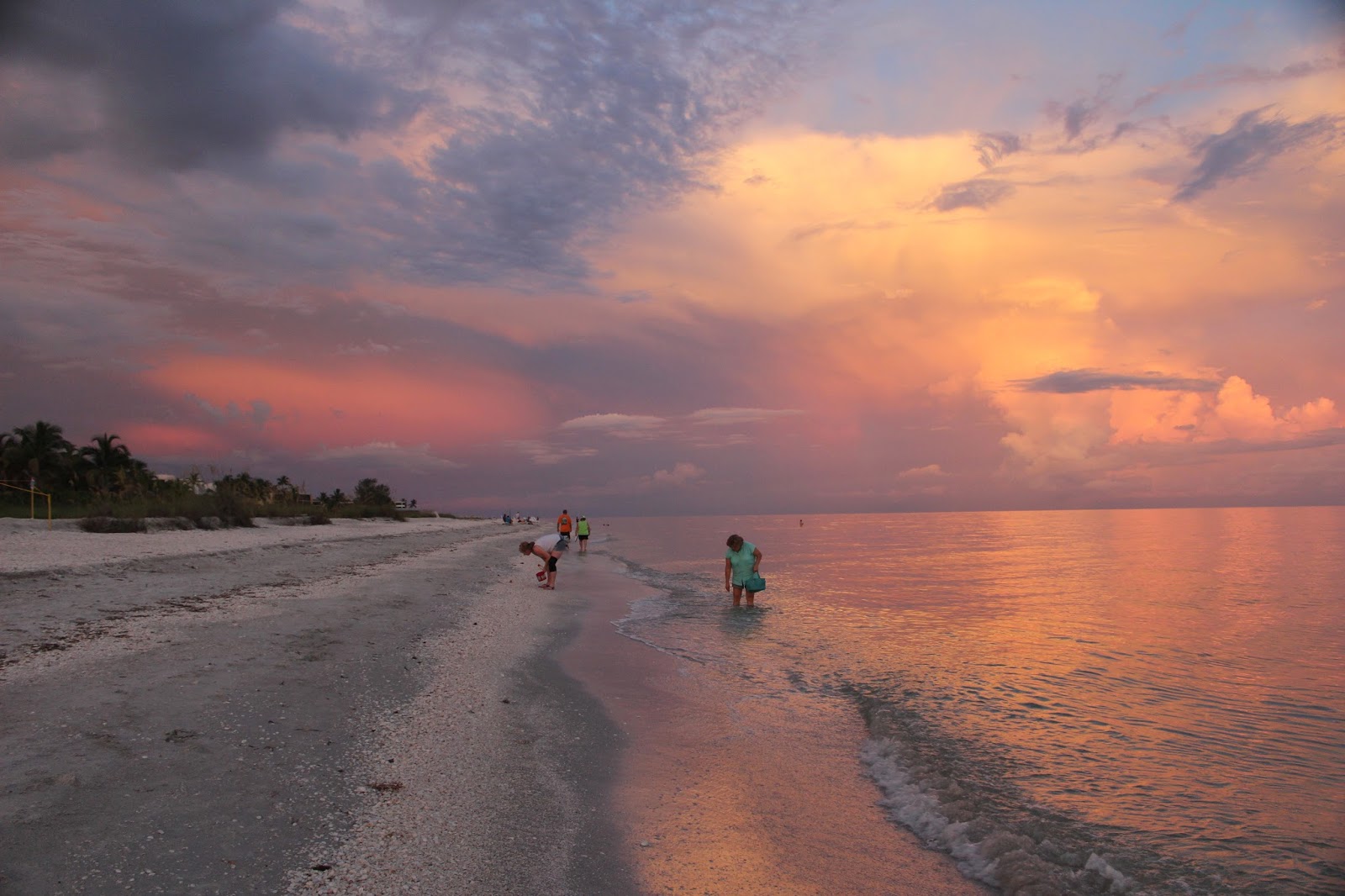 By the time the sun set we had hurried back to the condo.  The no-see-ums were out in force and I got attacked like never before.  We had liberally sprayed ourselves down with bug spray, but those little suckers were out for blood.  I had literally hundreds of bites on my arms, legs and back.  We couldn't get back to the condo fast enough.

Traci brought along 2 cases of shells from her recent trips and set up shelling stations on the balcony and in the kitchen to start sorting, bleaching and cleaning them all.   She had more shells than I think I've ever seen in one spot before.  Traci had a great variety of shells and it was fun to go through them and see how different they were from the Sanibel shells.﻿ 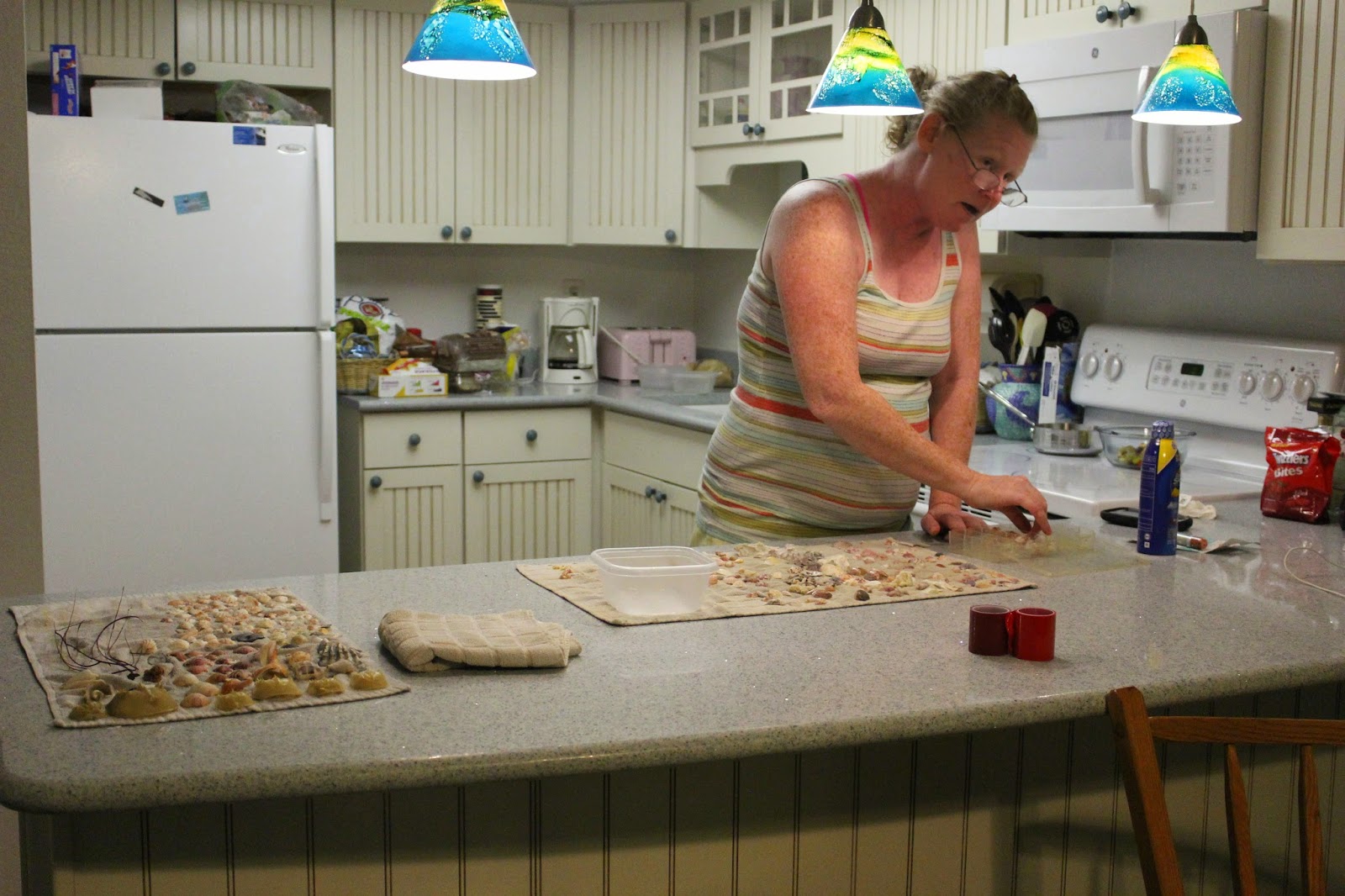 ﻿
I have another post coming up with some of the beaches we visited and the fellow bloggers we got to meet.  Lots of fun to come!
Posted by Kim@Snug Harbor at 12:00 AM