Welcome to Seaside Simplicity's Flashback Friday.  Each week feel free to post an old photo on your blog and the link back to Martha's site.  It's really fun to see the old photos and hear the stories behind them.

My photos this week were taken at the same event, just in different years.  When I was in my early twenty's, I was the office manager for a gourmet gift basket company that was a division of the JM Smucker Company.  Every year there was a huge industry convention called the "National Fancy Food and Confection Show."  Each year the convention was in a different city and I'd get to go with the sales team and help work the show.

One year when the convention was in New York City, we planned a spectacular entrance.  The president of the company, the whole sales team and myself all dressed up in tuxedo's and made a grand entrance into the convention hall.  I'll tell you, when we walked into the convention center, jaws dropped and we were the talk of the show.  It was great fun and very theatrical. 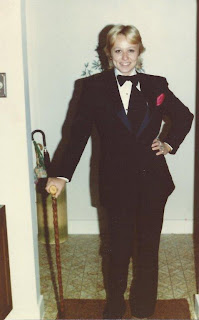 Here I am again in New York at the same annual convention, just a different year.   That year my mom and dad were on vacation driving along the east coast and decided at the last minute to swing into New York and visit me.  So they showed up at the convention center, I got them in, and they spent the day walking the trade show. 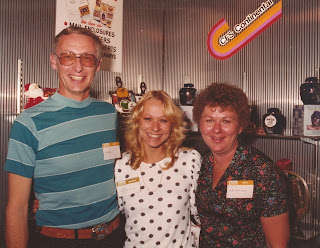 Afterwards we went to dinner at The Old Homestead Steakhouse.  If you're ever in New York City you need to go there for a great steak.  The owner of the restaurant was friends with my boss, so we got treated like royalty.  I will seriously never forget that meal - it was that good!

Don't forget to post a Flashback Friday picture and link back to Seaside Simplicity!
Posted by Kim@Snug Harbor at 7:05 PM