Lucky in More Ways than One 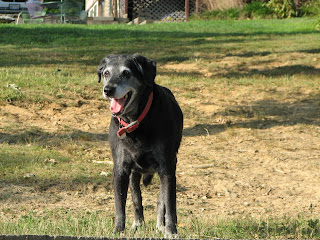 Fourteen years ago a friend of ours who lived in Kentucky had a Chocolate Lab who had puppies.  Chablis wanted one of those puppies so badly.  Being the mean mother that I am, I put my foot down and denied the repeated requests.  We already had a Yorkie and I really didn’t want a big dog that sheds.
Chablis pleaded her case for one of those puppies on the entire drive home.   Louie kept giving me side long glances and I kept shaking my head “No.”  Then Chablis blurted out the one sentence that melted her father's marshmallow heart.   “If I had a new puppy I’d name it Lucky because I’d be the luckiest girl in the whole wide world.”  I was out voted and I knew it.
The next afternoon Louie and Chablis took off, with an empty promise that they were just going to “look” at some puppies – some small puppies.  Two hours later they returned with a 6 month old black Lab that had been scheduled to be destroyed the next day.  “I named her Lucky,” said Chablis proudly.  My heart sank.
Unfortunately Lucky had been confined to a small cage for the first 6 months of her life.  As a result she did all her business in the cage, which most dogs won’t do.  It took me 3 months of extensive work to break her of that nasty habit.  She was shy and skittish, and panicked any time she had to walk down our ceramic hallway.  She would lay on the carpet in my office and whine, terrified to walk on that tile floor.  It took me 4 months to get her to trust me, to come when I called her, to chase a ball, to walk around the house.  By the end of the first year she was my constant companion, following me from room to room, always laying at my feet.  When I went to the bathroom she would lie outside the doorway, if I was in the kitchen she laid in the middle of the room and at night, she always curled up in the corner of my bedroom. 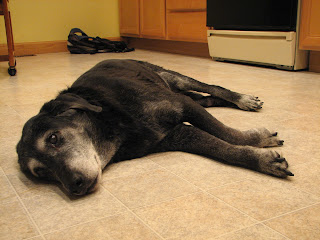 We tried to train her to retrieve ducks or pheasant when we went hunting.  The first time we took her to the hunting property she spied the pond and leapt in, happily splashing around in circles.  After we shot the gun at a duck, she ran the other way and that was the last of her hunting excursions.  When we bought the lake house she scrambled down the hill, tumbled off the break wall, landed in the lake and swam out towards the mouth of our bay.  The kids and I ran down the shoreline after her, screaming, scared to death she’d swim out into the main lake.   She just paddled around after some geese and then returned, covering us with a sheet of water as she shook herself dry.
She was a good travel dog and all I had to do was open the front door, yell “Who wants to go to Kentucky?” and she would zoom past me and fly into the back of the truck.  She’d plop down and we’d never hear a peep out of her until we pulled into the lake house driveway, 425 miles away.
Fourteen years is a pretty good run for a black Lab.  She’d been having problems the past few months, especially with the arthritis in her legs.  The past month had been hard on her as she frequently lost control and peed on the floor.  We often had to grab her around the waist and haul her into a standing position and when she went out in the yard, she usually needed help climbing up the 6” from the grass to the deck.  I’d sit and stroke her silky soft ears and hate myself for my increasing thoughts of putting her down.
Last weekend was an especially bad one for her and on Monday morning I handed Louie the vet’s phone number and begged him to call and schedule a time to bring her in.  I just couldn’t stand to see her suffer any longer.  I let her out in the yard and watched her struggle to relieve herself and then hauled her back up onto the deck.  She stumbled from the back door, through the hallway with the ceramic tiles that she used to hate, got as far as the kitchen, and she collapsed in a heap.  She looked up at me with her huge, dark eyes and it was like she was saying “That’s it, I can’t do it anymore.”  I knew in my heart that God had sent me a sign that I had made the right decision with the vet.
We slid her onto a blanket and covered her with towels and spent the day saying our good byes.  When I had to leave to go to the hospital for my mom’s operation, the kids took turns sitting with her, talking to her, stroking her and holding her head in their laps.  At 6:00 pm Chablis wrapped her in a clean blanket and Tony gently carried her out to the car and she took her last ride.
The vet was wonderful and caring and joined the 3 of us on the floor as we surrounded Lucky, kissing her and hugging her and crying over her.  She blinked her eyes a few times, but I think she was ready to go.  And then she was gone, taking our love and our hearts with her.
I’m glad Chablis named her Lucky.  She was a lucky dog because we saved her and gave her 14 good years with us.  But we were really the lucky ones because she gave us so much more than what we gave her.  I will miss her sweet disposition,  gentle spirit, soft ears and the way she loved it when I stroked her head.  Lucky was the day that she came home to live with us – in more ways than one. 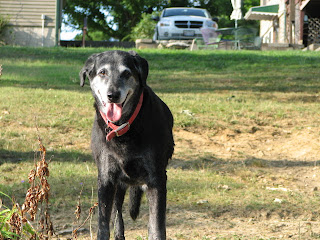