Steve Harvey and Me

A couple of weeks ago Louie and I got the opportunity to do something fun - we were on the Steve Harvey Show!  We're big fans of Steve and we Tivo his talk show every day and then sit and watch it while we're eating dinner. 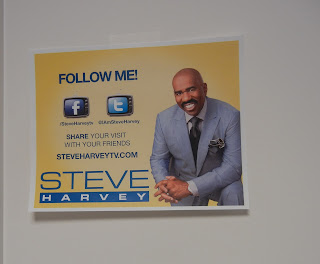 We saw one episode where Steve was giving a woman some advice about how to do something special for her man.  I got a big kick out of his answer and decided to apply it to our upcoming anniversary.  I wrote to the show and told them what I did and they ended up contacting me, asking if we'd like to be on the show.  Of course!!  Were they kidding me??  They did not have to ask me twice.

The day of the taping we got dressed up and headed for downtown Chicago where the show is filmed.  Here we are before we left and you probably don't even recognize me in nice clothes, as opposed to my usual "hiking in the woods, bag lady" look.... 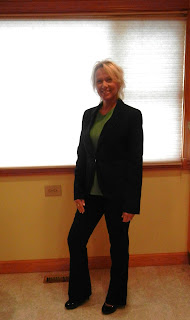 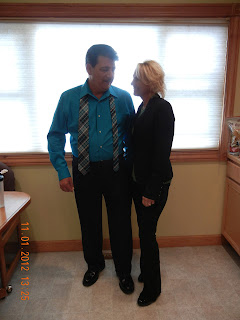 The Steve Harvey Show is taped at the NBC Studios.... 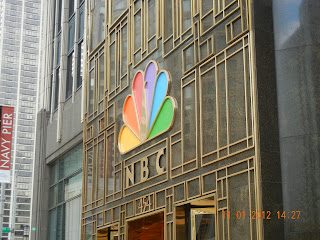 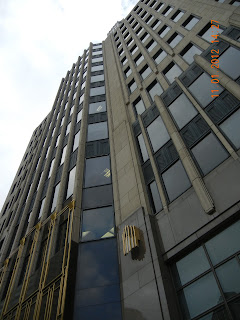 Inside the lobby was a long line of people waiting to get their audience show tickets.  I felt like a big shot because we got to by-pass the line, go to Security and one of the Producers came downstairs to get us.  She took us upstairs to our own, private Green Room.  Check this out - our name was on the door and everything!  (I swiped the name tag when we left) 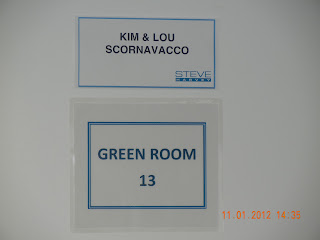 Everyone we met who worked at the show was so nice and did whatever they could to make us feel welcome.  They brought in a tray of food with all kinds of sandwiches and snacks, as well as a bucket of iced water bottles and soda.  We settled in and watched them start taping the show on the big screen TV on the wall.  Here's Louie acting like he's a newscaster.  Isn't he handsome? 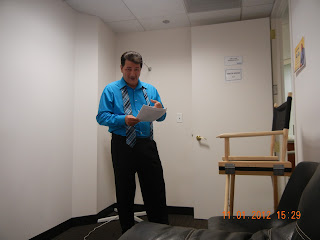 After awhile they took us to "Make-up." Louie got some quick powder on his face and then they fixed my hair and did my face.  It was really fun to sit and talk to the hairdresser and make up artist and get to see them in action.  They even took my jacket and steam pressed it.  I have to tell you, I could get used to that kind of treatment and I was really enjoying myself.  Louie had walked out into the hallway and got to meet Judge Mathis, who was just finishing up his show taping down the hall.  By that time Louie was really beginning to enjoy himself.

After hair and make up we went back to the Green Room and the sound guy came in and mic'ed us.  "I'm ready for my close up!" 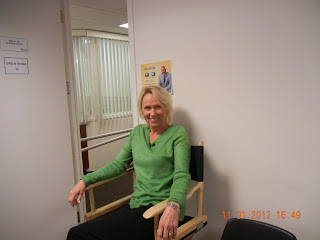 Our Producer came and got us and we went and took our seats in the audience and got ready to film the next segment.  The atmosphere in the studio was lively and fun.  They were blasting music and staffers dance around, clap, and get the audience all excited.

Then they filmed our segment and I couldn't believe how quickly it happened.  The audience gave us a big round of applause and we got a few laughs and even got Steve to crack up.  And then we were done.  Oh my gosh, it went by so quickly and I loved it.  I should have stayed in theater, because I realized how much I enjoyed being in the spotlight and hearing the applause.

I got this off the Steve Harvey Website advertising next weeks upcoming shows:

Steve helps a young woman get off the sugar daddy gravy train with advice on how to get independent and start earning real money for herself. Then, our three “Diet Wars” participants are back and ready to reveal their results. Between the Paleo Diet, a Plant-Based Diet and the DEM system, which one helped them shed the most pounds? And which one could work for you? Also, Steve helps a budding entrepreneur break the news to his bosses that he’s walking out the door to strike out on his own! And, a woman who took Steve’s advice on what to get her man for their anniversary is here to share the very revealing results!

Our segment is the one about the anniversary couple.  It's seriously less than 5 minutes long and I'm expecting it to be the last segment when they do the "Just One More Thing" part, unless they changed it and stuck it in someplace else.  So if you want a good laugh and would like to see me on TV being a nut, then tune in.  It's going to air Tuesday, December 4th on NBC and you'll have to check your local listings for air times.

All I can say is that I had the time of my life.  It was great to meet Steve Harvey in person and everyone involved with his show is just top notch.  It was a once in a lifetime experience!