This has been one hell of an autumn....  Last month Louie's brother Chuckie passed away.  This past weekend, his brother Bobby also passed away.  If that's not a one-two punch, then I don't know what the heck is.

I have such conflicting emotions on the passing of both of them and here's why.  Both were diabetics who had a really hard time keeping their diabetes in check.  Both spent several days each week on dialysis   One had heart problems and the other has had multiple broken bones over the past 2 years.  Each of them suffered physically each and every day.  To tell you the truth, their quality of life sucked the past few years. I know in my heart that now they are in a better place.  I truly believe they have left this world and are sitting in the arms of the Lord, free of the pain that this physical world inflicts.  But that doesn't make it any easier to let them go.

This is one of my favorite pictures of 4 of the brothers taken quite a few years ago when we were deer hunting.  That's Bobby kneeling in front, holding Tony. 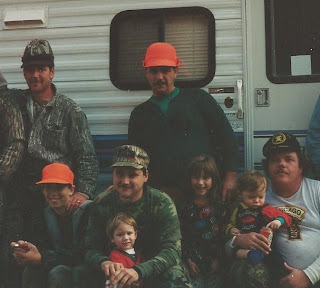 My sister in law and I spent half an hour on FB the other night, reminiscing and laughing about Bobby and the crazy stuff he did.  Bob had the best smile and the greatest laugh.   He loved to bet on the harness races. His favorite driver was named Jim Curran and he thought ole' Curran was the best driver in the world.  He never stopped talking about the damn guy.  So one Christmas I got a publicity photo of Jim Curran and stuck it in a photo frame and wrapped it up for Bobby.  When he opened that gift, he fell on the floor laughing his ass off - and that's what I loved so much about him, his sense of humor.  I'm so glad we have a movie of that, because it's one of my favorite memories of him.

I grew up with 2 sisters and had no brothers of my own.  Louie's brothers welcomed me with open arms and I grew quite close to all of them.  Did they piss me off sometimes?  Yes.  Did they drive me crazy with the stupid shit they did?  Yes.  Did I yell at them in frustration when they did things they knew better than to do?  Yes. Did they make me laugh?  Yes.  Were they always there for me if I needed them?  Yes.  Did they truly love my kids?  Yes.  Because that's what's great about having brothers!

I am heart broken for the loss of 2 of my dearest friends, so closely together.  Both were men whom I loved in spite of their faults and because they were who they were.  Bobby's two greatest gifts to me were his sense of humor and his smile.  I will miss you Bobby.  I'll bet on Curran the next time I'm at the track.