I have a fun geocaching TB story to share with you today.  Back in March of 2010 I gave a TB that I named "Bugleann's Hawaiian Adventure" to a friend of mine who was going to Hawaii.  He dropped it off in a cache for me and my hope was that it would travel around Hawaii for a little while. 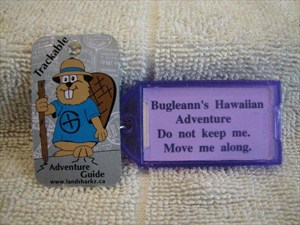 Enter geocacher "Kailua Al" who retrieved my TB from a cache.  Al asked if he could keep it for awhile and travel around with it.  Well, Al went above and beyond the call of duty on this one.  He ended up keeping that TB for a year and a half, traveled with it to 5 US states and 5 foreign countries, plus all over Hawaii and put over 41,600 miles on it.  Whew!  In the process, he also posted about 100 photos from around the world to my TB page.  How awesome was that??

I was tickled pink that Al was doing such a nice thing for me.  It was really fun to keep tabs on where he was and see the photos from so many cool places.  So I decided to make a TB in Al's honor and release it, with a specific mission for it to reach Kailua Al in Hawaii. 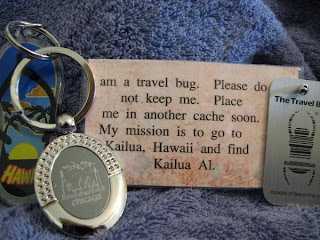 I activated the "Looking for Kailua Al" TB on June 4, 2010 and took it with me when my sister and I flew to Sanibel Island, Florida.  We dipped it into a few geocaches..... 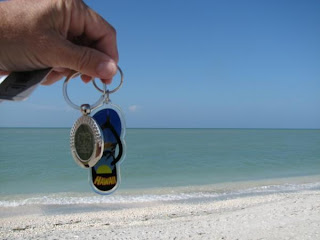 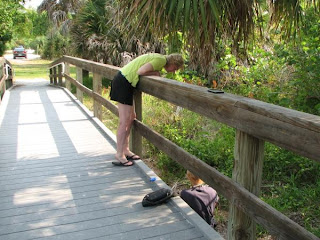 ....and when we were ready to go home, I handed it off to her to take back to Colorado.  Once there she placed it into another cache.... 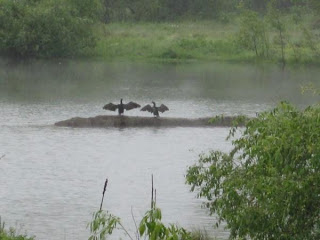 From there it traveled to Canada, Pennsylvania, Delaware, back to Florida, New Hampshire, Maine, New Mexico, and finally to Washington State where it was picked up by Mazeracer on Sept. 9th 2012.  Mazeracer added a turtle charm and posted this note on the TB page:

It appears that "Looking for Kailua Al" has another nice Hawaii keychain added to the collection, so we decided we should add a turtle charm we picked up on our trip to Maui last February. See how these travel bugs take on a mind of their own? :-) We have a caching friend from Maui coming to visit in October. We're planning on having an event while he is here so if you don't mind we can keep this to travel for a bit with us and pass this on to him when he is here October 26th-28th. 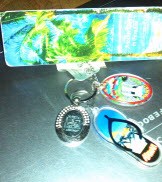 On October 27th, Mazeracer passed it off to his friend, Tracerbullet, who took it on a TB tour for a few days and then headed for Hawaii where it was placed in a cache on October 31st..... 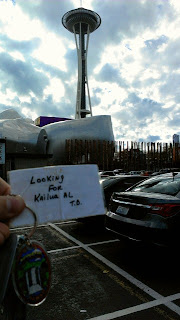 I kept a nervous eye on the TB, hoping someone would pick it up and carry it closer to the island where Kailua Al lived.  Imagine my surprise when I got this message from Ancognito on 11-12-12:

Kailua Al is my close geocaching friend.
Talk about a "Small World" ! A little over five years ago, I infected Kailua Al on June 10, 2007 with the geocaching "virus". Since then he's traveled the world looking for caches. I was on Maui for the weekend and for some reason I looked at the TBs in this cache. Don't know why I looked in it because had already I found this cache last year. Seems like the TB was calling out to me! I will drop off this TB at Kailua Al's home !

How cool is that and what are the chances??

Bugleann, The Looking for Kailua Al Travel bug finally found me. It traveled over 13,000 miles on the way but the first cache it was placed in when it arrived in the state it was found by the same person who originally introduced me to Geocaching in 2007. He is from Oahu like me but was on Maui taking care some things and took a little time off to cache. He had a feeling he should check on a cache he had found a year before to check out the TB’s inside. He was very surprised to find the Looking for Kailua Al Travel bug. He gave me a call to let me know and he dropped it off at my house for me to make the grab. I now have it and will take it caching with me for a while. It has acquired three more Hawaii key rings on its journey and is looking good. Thanks for releasing it and the fun as I’ve watched it make its way to Hawaii.

Here's the final photo's of the Kailua Al TB.  It looks like a couple a nice geocachers added a few good luck charms to it along the way ....

And here's Kailua Al himself:

So, it took almost 2 1/2 years, traveled 13,464 miles and due to the kindness of many geocachers along the way, it finally landed in the hands of its namesake.  Ownership of the TB has been passed to Kailua Al, who can now do whatever he likes with the TB.

As for me, I had a lot of fun tracking the TB.  Because of geocaching I got to cyber meet Kailua Al, who is a really great guy.  Oh yeah, the TB that started off this whole thing - my Bugleann's Hawaiian Adventure TB - it's still going strong. It's now in the hands of another Hawaiian caching family who have taken it under their wing.  The Brownie Family has taken up where Kailua Al left off and so far they've traveled with it to Oregon, Texas, Arkansas, and Tennessee.  Currently my TB has logged 67,670 miles.

It's all a pretty amazing story and just goes to show you how nice geocachers can be!
Posted by Kim@Snug Harbor at 1:00 AM