Mike's wife, Broke, has joined him on the AT. 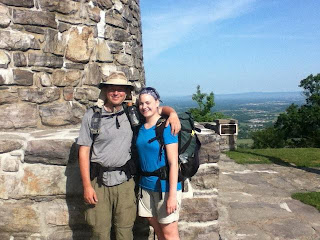 Brooke arrived around 8 last night.  We ordered some pizza and are taking a zero day here while we catch up on some errands.  I'm at mile marker 1,016.

Why did you pick the trail name Standing Bear?

I've been planning on writing a blog post about this, and hopefully will have it posted today. 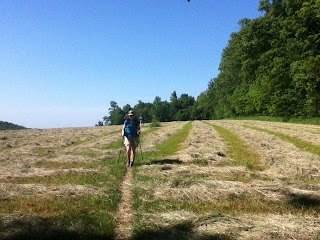 (brooke on the trail!)

Your wife, Brooke, is joining you.  How will this change your hiking pattern?

It will change in several ways.  First, Brooke does not have her "trail legs" yet so I'll need to hike fewer miles each day than I'm accustomed to until she is physically ready to do more.  On the flip side of that, however, is the advantage of being able to camp more often instead of using shelters.  When hiking alone, I felt it was safer to use the shelters and never camped out unless I was camping with other hikers (by "camping" I mean sleeping in the wild instead of using a shelter).  This was influenced in part by the movie "127 Hours" as camping alone means that no one knows where you are.  Now that my wife is here I can camp more and use shelters less.  This will affect my mileage because previously if the next two shelters were 10 miles and 24 miles away, I would do a 24 mile day because I didn't want to just do 10.  With my wife here now though, we could camp after 17 or 18 miles instead of feeling forced to go 24 to the shelter.
How often do you get to wash your clothes?
Once per week.
Do you brush your teeth every day?
Yes.  My toothbrush weighs less than an ounce.  I brush with water though and don't use toothpaste.  I also floss regularly.
What maps or guidebooks are you using?
I use the "AWOL" David Miller AT guide.  I started with the thru-hiker handbook but switched to AWOL's book because he shows the elevation profile and has more info and detail.
Did you read any books written by previous thru hikers prior to undertaking your hike?
Just Bill Bryson's book.  He is very funny but it was sad that he abandoned his thru-hike attempt after just 200 miles.  He quit so early, but then again so do many others. 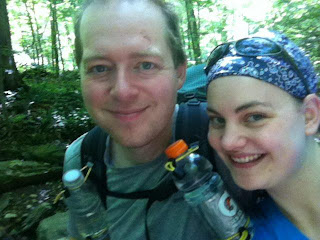 Visit the Hike4kids FB page.
(all photos property of Mike Mclaughlin.  Do not reproduce without permission.)
Posted by Kim@Snug Harbor at 1:43 AM