This cache was placed in honor of CurlyNN and her birthday bash.  Unfortunately I missed the party because I was in the middle of a computer and internet crash crisis that day, but we got over there a few days later to make the find and drop off a little TB I had picked up. 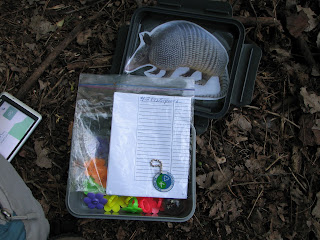 Here you can see the cute little cache container with a picture of an armadilo on the inside of the lid.  The cache was filled with swag for kids.  I dropped off the TB, which you can see sitting on top of the log sheet.  Sometimes it's nice to have enough time to just grab a couple caches before dark, and that's what we did that evening.  This one was placed at a small nature center and it was pleasant just to walk down the paths and around a small pond to get to the cache.
Posted by Kim@Snug Harbor at 12:40 PM