Chicago in an Hour and a Half

My daughter had a meeting in Chicago today.  Originally she was going to take the El train into the city, but since we didn't really have anything specific to do today, we decided to drive in with her with the intention of dropping her off and going to do a few geocaches.

We left at 8:55 am.  We got onto the expressway which is literally 1 minute from our house.  The office she had a meeting at in downtown Chicago is 16 miles away.   Here's what traffic on the Kennedy Expressway going into Chicago looks like at 9:30 am...... 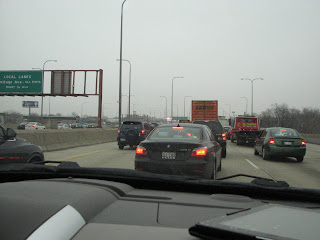 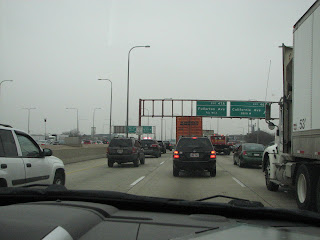 It took us an hour and 35 minutes to get her to her meeting.  We ended up getting off the expressway 2 miles short of where we were supposed to get off and we were flying down side streets.  One of the bridges we had to cross was blocked due to construction and we got routed back onto the expressway, going back towards home.  OMG!!  Mario Andretti My husband was on a mission and let's just say that we miraculously pulled up in front of the office with 2 minutes to spare.  I hate driving into Chicago.  Ugh!  Here's a tip - take the Metra if you can!

We dropped her off and drove down to Belmont Harbor where we decided to go for a walk along the lake front.  It was extremely overcast today and the threat of snow is in the air..... 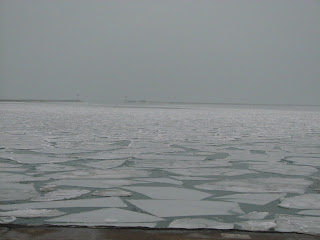 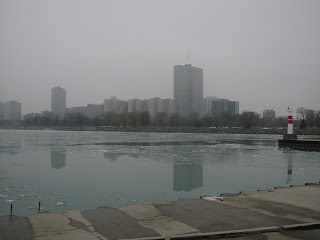 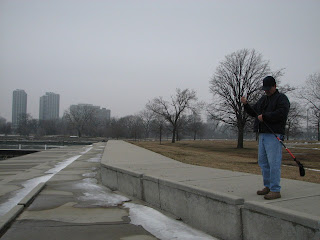 I was surprised to see several fisherman casting lines out into the open water at the mouth of the harbor.... 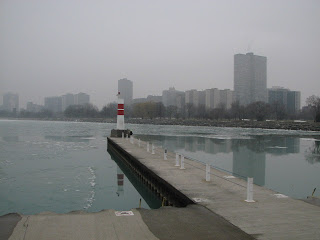 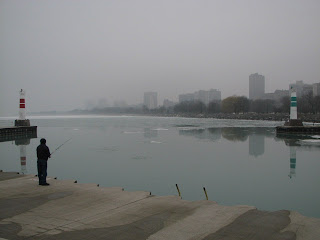 We walked around to the inside harbor.  The current was pushing sheets of ice into the harbor and when they hit the stationary ice, it sounded like thunder. 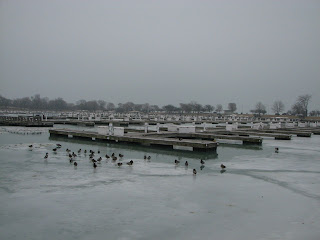 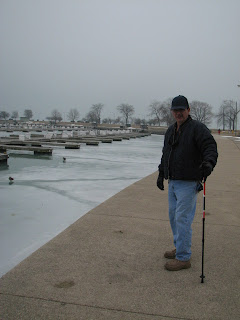 We got back into the car and drove down to Montrose Harbor.  There were several fishermen out on the ice in the harbor, sitting on buckets and fishing for perch.  One guy caught one while we were standing there.  The ice was at least a foot thick here which surprised me because it really hasn't been super cold this year. 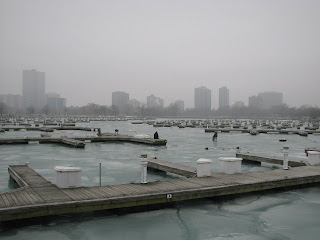 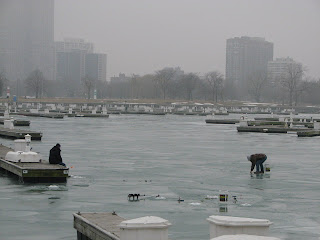 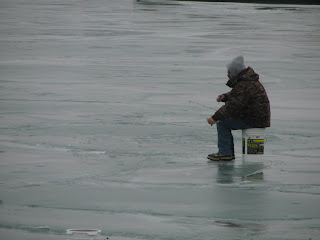 It was cold down at the lake today!  You can tell because my jacket is zipped and my gloves are on. 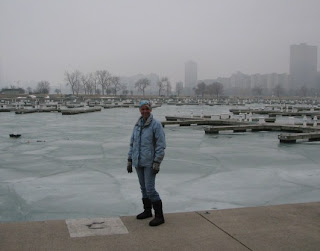 Then we walked over to the Bird Sanctuary which is right on the lakefront..... 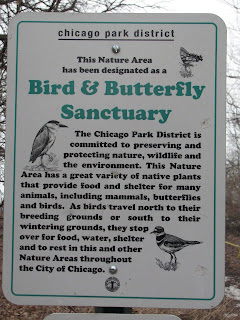 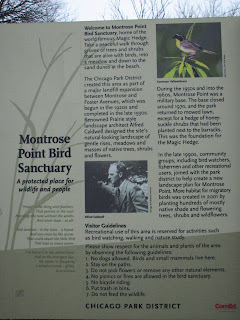 and hiked over some of the trails.  They were pretty iced over so we just took our time. 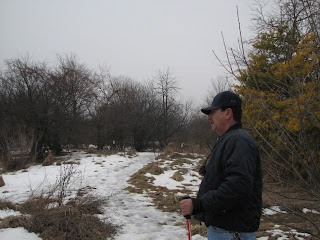 We managed to find a geocache hidden there in spite of the frozen snow cover.

We had a list of 7 geocaches we wanted to do, but the parking situation in Chicago, as well as the heavy traffic, makes it almost impossible to drive and park anywhere near caches.....

The 2 round buildings are the Marina Towers.... 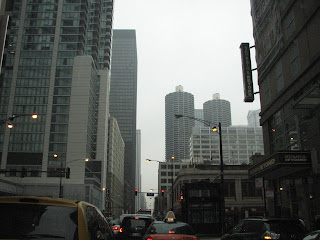 Here we were sitting on the bridge over the river.  We were this close to a cache, but couldn't find a place to park.  I just stared at where I thought it was with a sad face as we pulled away... 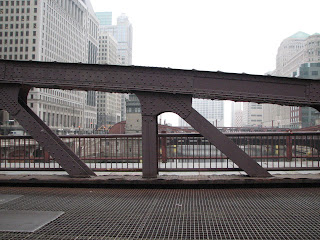 This is Wacker Drive.... 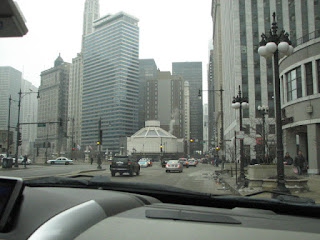 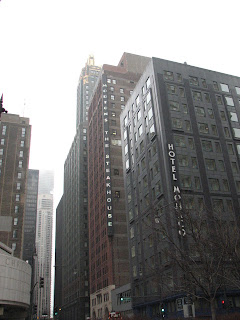 After Chablis' meeting we took the streets back towards home.   We were sitting at a light at the Belmont Train Station and I liked this face on the piling.... 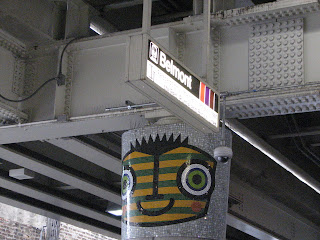 We slowly made our way to Roma's, located on Cicero, in an area of Chicago called 6 Corners.  Roma's is known for their hot dogs and beef sandwiches and has been in Chicago for almost 40 years.  It's a small place, no tables, just a short counter along the windows with a few stools.  In the summer, the line is often out the door.  I used to work around the corner from there and we would walk over for lunch.  I love their excellent beef sandwiches. Chablis got a meatball sandwich today and she said it was the best one she's ever eaten.  Conveniently, there was a geocache hidden in the parking lot, so I made the grab while Louie was getting lunch.  Maurie the Hot Dog TB posed for a photo! 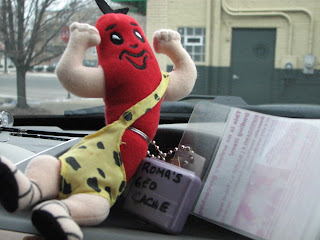 That was our day in Chicago.  I like going downtown once in awhile, but slap me upside the head the next time that I suggest driving in.
Posted by Kim@Snug Harbor at 1:03 AM