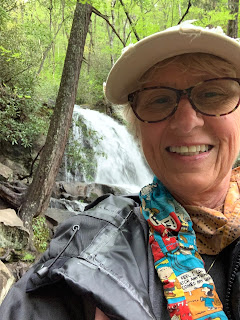 (me at Laurel Falls)

I got up to light rain - again!  Ugh.  I fired up my Jetboil and made oatmeal and coffee for breakfast and then headed out.  My sister had suggested that I go do Laurel Falls first because it was an easy, paved trail and a good way to ease into hiking the Smokies.  I wanted to get to the Laurel Falls trailhead before the parking lot filled up so I arrived before 8:00 and there were already 6 cars there ahead of me.   I pulled on a long underwear shirt and my rain jacket and headed out. 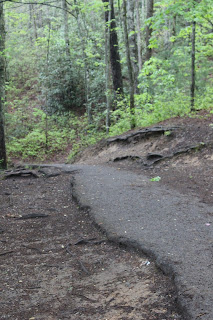 Once I was on the trail the canopy of trees protected me from most of the rain.    I’d read that you should plan to spend around 2 hours there and back so I surprised myself my making it to the falls in about 45 minutes. 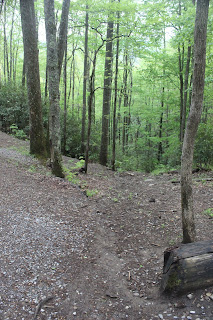 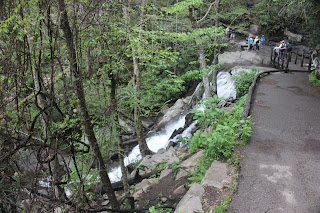 I sat down to take a break and enjoy the view and since I was thirsty I started rummaging thru my backpack for my water bottle.  Hmmm…..  bear spray on my hip – check.  Camera around my neck – check.  Hiking stick and snack bar – check.  Water bottle??  Nowhere to be found.  I was so darn worried about having everything else that I walked off and left the water bottle laying in the back of the car.  What an idiot.   Lesson learned!   The falls were flowing pretty good.  Be careful where you step tho - I saw one woman fall flat on her ass when she walked over a wet spot. 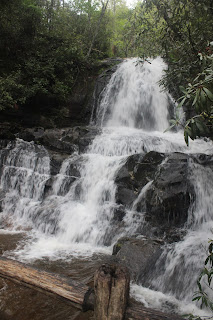 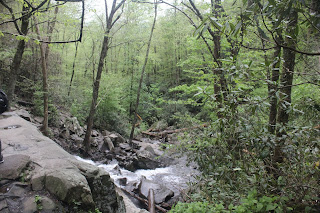 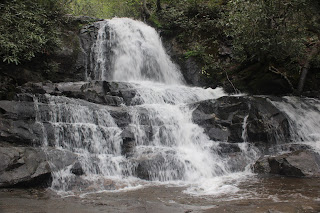 I snapped a bunch of pictures and headed down to my car.   I made the trip back in 40 minutes in spite of the trail being extremely crowded by that time.   I doubt I walked 50 feet the entire way back without running into hikers headed up.   By then the parking lot was completely full with more cars spilling out along the side of the road.  I was so glad I got there early.

My sister had also told me that she heard that Cades Cove is now closed to car traffic all day on Wednesdays instead of the previous 10:00 am deadline, so I stopped at the visitor station and confirmed that with a ranger.   I was glad my sister mentioned it or I would have made the trip for nothing.   Looks like Cades Cove was being pushed back to another day.

I decided to head into Gatlinburg and walk around for a few hours.   I paid $ 15.00 for an all day parking spot and took off down the main drag.  There are so many stores and restaurants to check out and there were a lot of people there.   I headed over to The Donut Friar and got myself a delicious raspberry filled powdered donut and a cup of coffee. 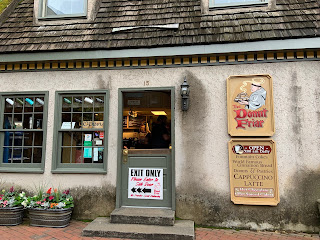 I sat and people watched for awhile before heading over to the Skylift.  I wanted to do the Pedestrian Bridge at the top because there’s a glass section you can walk on.   I thought that sounded kind of cool so I’m happy I did it. 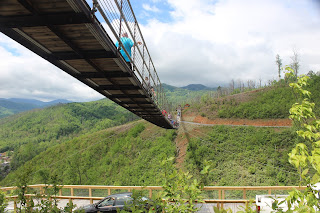 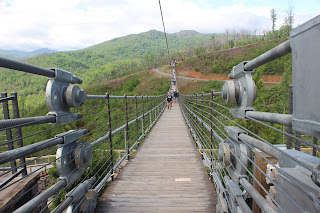 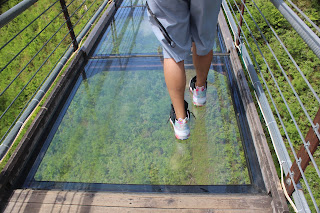 It was extremely windy at the top but the rain had stopped and I got some good, but cloudy, pictures of the Smokys in the distance. 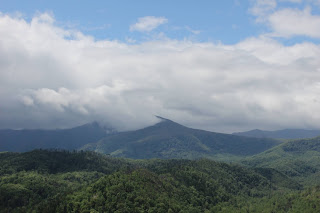 I did a couple geocaches and then stopped at Ole Smoky Moonshine and did a Moonshine tasting. 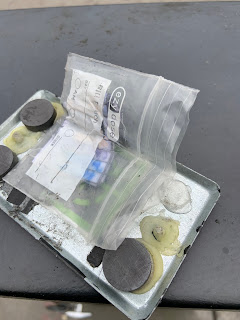 That was fun!   I tried several different flavors, including Apple Pie, Blackberry, Watermelon, Grape, and a few others.  I purchased 3 jars of Apple Pie, no not all for myself, 2 were gifts and also bought myself a sweatshirt. The rain had started up again and since it was already past 2:00 I decided to drive over to the Hungry Bear for a BBQ Brisket sandwich for a late lunch.  I didn’t realize how hungry I was! 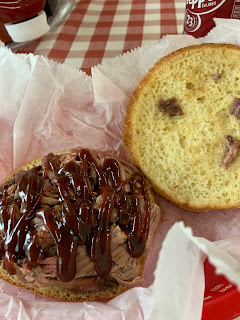 I decided that I had had enough for one day so I went back to the campground, cleaned up my car, and then sat in my tent for awhile and watched the rain fall.   Enough already with the rain!!!  I debated pulling my bedding out of the car and moving into the tent to sleep, but decided against it.   It was just too comfy in the car and the tent was serving well as a catch all for my cooking equipment and wet towels.
I spent the rest of the evening just reading and catching up on email and facebook before going to bed by 9:30.  I planned on getting up early and heading to Clingmans Dome  in the morning - finally!