Yesterday was my lucky day!    I have absolutely no qualms about slamming on the brakes stopping my car and grabbing a discarded piece of furniture that is laying on the curb waiting for the trash man.  Come on...  I know some of you do that too.  Anyway....

Yesterday morning we left our house and headed over to an estate sale.  As we turned the corner I noticed that the house behind us had a pile of furniture out in front by the curb so we stopped to investigate.  I saw some stuff I wanted but since we had my car, we went to the estate sale first and then headed back.   Believe me when I tell you my heart was in my throat because I was so worried that somebody would get there before us and get all that good junk.

When we pulled up there was a woman out in the driveway so I jumped out and asked her if she was throwing out all that furniture.  She said yes and that I could take anything I wanted.  Then she mentioned that they had to put her mom in a nursing home, had sold the house, and had to have the house empty by tomorrow for the closing.  She asked me if I wanted to come inside and see what else they were throwing out.

OMG - that's heaven to a junker's ears, isn't it?  Was she kidding me????  I couldn't get in that house fast enough.   It was mostly a lot of garbage left but she did have some furniture that I was interested in.  I played it cool and poked around a bit since she said she thought her brother might want what was left.  I sent Louie home for our truck and I went back outside and guarded a cedar chest, a waterfall dresser and mirror, a small drop leaf table and a cane. 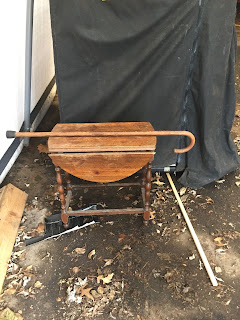 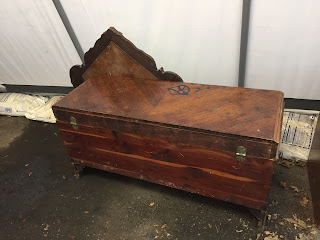 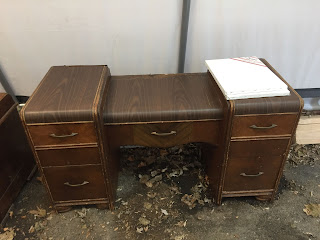 We took everything home and unloaded it and all the while I kept saying I wanted the tall secretary and matching chest that she had in the house.  I headed inside to my office to work and Louie shouted that he was going to be outside in the garage.  20 minutes later he was back with another truckload - the tall secretary I wanted with the matching chest and mirror, a large drop leaf table, and a small decorative side table.   Everything was FREE!!!  The lady said her brother decided he didn't want anything and they were so glad to give everything to someone who wanted it instead of it going to the dump.  She said some of it was her grandmothers stuff and really old. 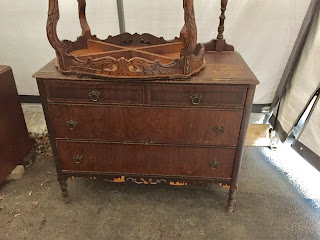 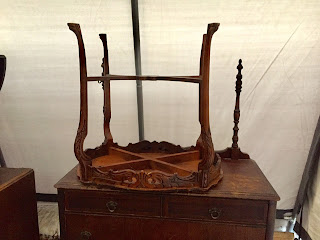 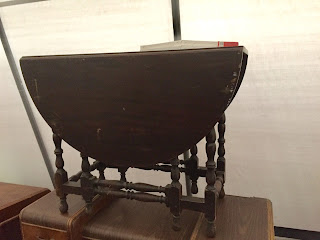 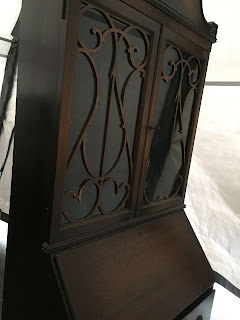 I'll tell you - I am giddy!!  Now we have plenty of projects to work on for awhile.  I spent all last night pouring over Pinterest and trying to decide how I want to re-do everything.  And again, I have to thank my fantastic husband for going back and scoring some more great stuff for us.  If you remember, he went above and beyond the call of duty last week when he got that vintage trunk for me.   How lucky am I???
Posted by Kim@Snug Harbor at 12:00 AM