Book Review - This Life I Live

This Life I Live by Rory Feek.   One man's extraordinary, ordinary life and the woman who changed it forever. 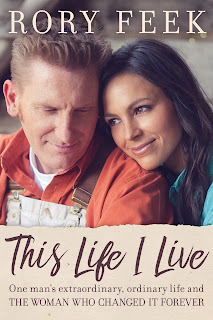 Meet Rory Feek - A soft spoken man with a shy smile and twinkling eyes who favors farmer style overalls over a suit and tie or faded blue jeans.  Rory spent his childhood seeking love and affection from an absentee father, a mother who did the best she could, and an uncle who saw a spark, enough of something, to help him secure a much coveted guitar.  Rory bounced from woman to woman, eventually ending up with a failed marriage that left him determined to raise 2 daughters on his own.  Convinced his future was based in music, he relocated to Nashville and eventually met Joey, the woman who helped to change his life.  Along the way he found faith in God, and peace within himself.... 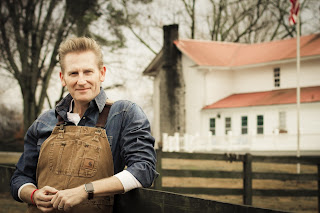 Rory has an honest writing style that invites you to come sit on the porch with a glass of sweet tea and rock awhile.  His words spread smooth across the pages like maple syrup upon a stack of pancakes.  In order to see how far he's come, he starts at the beginning and pours his heart onto the pages.  He bares his soul and the truths rush out - booze, sex, forgiveness and redemption, guilt and shame.  Sometimes you have to live through the worse in order to find and truly appreciate the good...

Sometimes God builds things that you don't see or even dream about.  And other times when a door closes, a window opens.  When Rory finally meets Joey, a vet assistant with aspirations of becoming a singer, they are both in relationships with other people.  A series of chance encounters eventually brings them together and soon they are married and living in Rory's remodeled farmhouse.   Life isn't easy for the couple at first and they quickly discover that they each have very different ideas of what their marriage roles should be.  And almost as soon as Joey secures a recording contract, her dreams are dashed.  Through their strong faith in God they discover that it's never too late to start over.  Rory continues writing hit songs, Joey opens a cafe with her sister in law, and a meeting with another song writer leads them to a 3rd place finish on the CMT competition Can you Duet.  This inspires them to start a recording career together, something they hadn't considered before.  God does work in mysterious ways, doesn't He?

But life doesn't always travel the road you think it should.  In 2014 the couple decided to take a break from their music careers and concentrate on living at home with Rory's daughters and raising their new daughter, Indiana, who was born in February of that year.  Within days they discovered that Indiana was born with Down Syndrome and by May Joey had been diagnosed with cervical cancer.  After surgery and treatment she was declared cancer free, only to have it come back a year later.   Unfortunately this time the prognosis was devastating and by October of 2015 they found out she was terminal.  It will hit you in the gut when you realize that Joey was not going to survive and that Rory would be left to raise another daughter alone.

Circumstances like these are enough to break a person.  And yet Rory Feek is a man who took all that life threw at him and made a life worth something.  This is not a book about death.  It's a book about life and how to see what's important.  It is Rory's story of faith, love and hope.  It's his message of believing in something bigger than yourself.


Last year, just before Joey's death, the couple released their final album - Hymns That are Important to Us.  This album was a labor of love and faith for the couple.  As Joey was undergoing cancer treatments she recorded her vocals in hotel rooms whenever she felt up to it.  At the 2017 Grammy awards a few weeks ago their album won for Best Roots Gospel Album.  Do you think Joey knew?  I do.

I listen to country music so I was familiar with Joey & Rory since their first hit song, Cheater, Cheater  and therefore I knew who Rory was when I ran across his blog This Life I Live.   It chronicled their journey as Joey navigated her last few months and continues today as Rory's life takes on a new direction.

In an ironic twist of fate, Joey & Rory recorded "When I'm Gone" in 2013, and made a music video depicting Rory living in their farmhouse where Joey is buried among the trees in a back field.  The video is beautiful and I guarantee you will have trouble holding back the tears.

As an Amazon Associate I earn from qualifying purchases.   Get your copy here
(I was given an advance copy of this book in exchange for an honest review.  All opinions are my own.  Photo images are the property of the publisher and cannot be reproduced without consent.)
Posted by Kim@Snug Harbor at 12:00 AM