Book Review - Impressionists on the Water

Today I'd like to share my book review of Impressionists on the Water, by Phillip Dennis Cate, Daniel Charles and Christopher Lloyd, Skira Rizzoli, 2013. 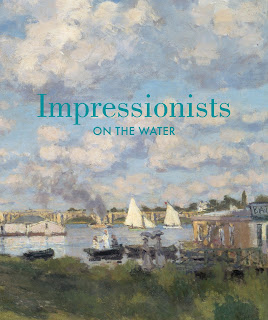 Impressionists on the Water has been released in tandem with a major exhibition at the Legion of Honor organized by the Fine Arts Museums of San Francisco.  It's also going to coincide with the America's Cup races on San Francisco Bay in the summer of 2013.  This 224 page hardcover edition effectively traces the history of water scenes within the social context of the latter nineteenth century.  192 color and black and white illustrations brilliantly display the nautical, water and boat scenes that were favored by the Impressionists.

A pleasant surprise was that this book is much more than a collection of famous paintings.  It's an enlightening course in art history.  I never realized how closely Impressionism and boating were intertwined.   By painting outdoors and using broad stroke techniques, the Impressionists documented the emerging competitive sport of sailing on the French waterways.  A great many of the Impressionist artists were yachtsmen themselves and as such, they took great care in accurately documenting the mechanics of sailing into their art.  After devouring this book, I've gained a deeper understanding and appreciation of the Impressionist movement.

Claude Monet was at the forefront of the Impressionist movement and he displayed a fresh approach when he was encouraged by his mentors to paint outside in the open air, and he produced the below painting  (Monet's Regatta at Sainte-Adresse) that provided a new approach to a marine subject. 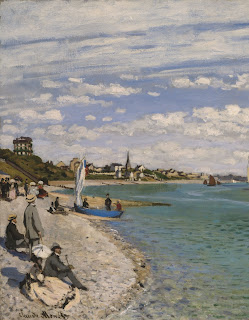 In 1872 Claude Monet painted Impression, Sunrise and when it hung in an exhibit in 1874 art critic Louis Leroy coined the term Impressionism from the paintings title and a new era in art history was born. 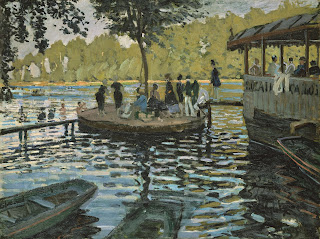 For a long time rivers served as the main arteries of France and with the advent of the railway system in the mid 1800's, the suburbs of Paris were opened to the public and fishing villages became tourist attractions.  Class barriers began breaking down and the city of Argenteuil became the suburb that the Impressionists examined the most.  This was probably because so many of the Impressionists visited this town at the same time during the mid 1870's.  In fact, Monet and Renoir often painted very similar scenes, such as Monet's Boaters of Argenteuil and Renoir's Seine at Argenteuil.  However,  on one occasion in 1874 they each painted the same regatta.  Both paintings were named Regatta at Argenteuil and it's interesting to see the 2 paintings side by side and compare the differences in style to the similarity of the scene.

Another thing I liked about this book was the detailed history on racing sailboats and the connection they had with the Impressionist period.  Since approximately 85 percent of the Impressionist artists had nautical roots they applied extraordinary care in depicting details such as how the boats were moored or how sails were rigged, right down to the smallest detail, such as how a rope was coiled.  The works of the Impressionist era were key contributors in the documentation of yachting history. 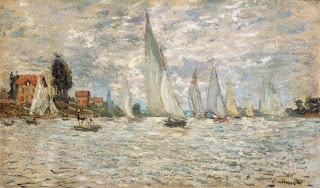 I have long been a fan of Monet's works, but because of this book I've come to have a much better understanding and appreciation for many of the other Impressionist artists such as Gustave Caillebotte, Camille Pissarro and Perre-Auguste Renoir.  In fact, the three of them were good friends and one summer Renoir painted his wife rowing with Caillebotte's companion as shown below in Renoir's The Seine at Argenteuil 1888....... 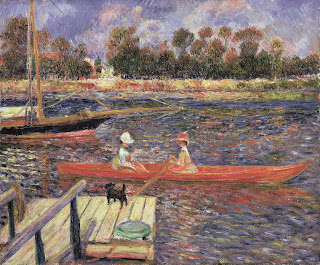 One of Caillebotte's paintings that I particularly like is Oarsmen Rowing on the Yerres 1877 because of the artists perspective of the oarsmen.... 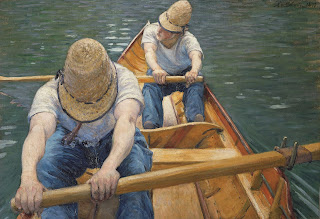 One of Caillebotte's last major works was Regatta at Argenteuil and it has been declared a nautical Gesamtkunstwerk.  Loosely translated, this means a total work of art.  The reasons behind this distinction lay with the fact that Caillebotte was not only an accomplished artist, but was also France's sailing champion, and the country's foremost designer of racing yachts.  This painting shows his own racing boat - Roastbeef - which was built in his own boatyard, and he represents himself here at the helm....  Truly an incredible work of art! 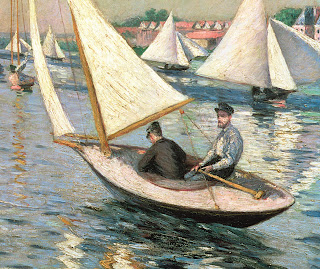 To have so many paintings collected in one book is a gift.  It was sheer joy to sit and leaf through the pages over and over again.  After all, does one ever tire of looking at beautiful artwork?  Is it as impressive as standing in front of one of the paintings in a museum?  No, of course not.  However, it is a treat to be able to sit in the comfort of your own home and pour over the pages, study the paintings at length and to discover new artists and their works.

Some of my new favorites are
But my heart clearly still belongs to Monet....
Honestly, because of Impressionists on the Water I've seen paintings by artists that I really wasn't familiar with before.  I learned the stories behind some of the paintings by Monet, Manet, Caillebotte, Renoir and Pissarro.  I have a deeper understanding of how the paintings and the water are linked and how important these works of art are to the history of sailing.

Having my own copy of Impressionists on the Water is almost like having a private miniature art studio in my living room.  I'd love to be able to visit the exhibition at the Legion of Honor and see some of these paintings in person.  I urge you to pick up a copy of the book and learn more about the Impressionists and their water paintings.  You will be intrigued and delighted.

If you'd like to learn more about the current Impressionists on the Water exhibit at The Legion of Honor, please visit their website for more information and exhibition dates.


I was provided an advance copy of the book for review purposes and asked to give an honest review. All opinions are my own.  All photos are property of Rizzoli Publishing and cannot be reproduced.