My funniest caching experience happened on a caching excursion last year.  A group of us gathered early one morning to tackle the 10 stage multi cache “Out of Sight.”  This epic cache ended up taking us 6.5 hours to complete.  Another group of our caching friends (Mary’s group) had done the first 5 stages the week before and we had heard that they were going to try to finish up the final stages the same day as we were going to attempt the whole thing.
Our group gathered and started off at about 7 am.  At around 10 am I got a text message from my friend Mary.  She said they could hear people in the woods talking and they were wondering if we were anywhere close to them.  We determined that they were still a few stages ahead of us, so I wished them luck and our group continued on our way through the stages.
We were almost finished; in fact, I think we were headed to stage 9, when we came upon an old rusted out car in the middle of the woods.  How it ever got there in the first place was a mystery.  We had a good time climbing around on the car and taking photos.  Somebody even mentioned that the car would make a good spot to place a geocache, but none of us had the necessary supplies with us in order to do that. 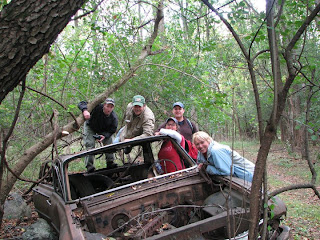 We went on our merry way, completed the final 2 stages of the cache and took a bunch of photos.  It was a milestone cache for 2 of our group with Wheels00 hitting 2500 and Dinaworks hitting 1000! 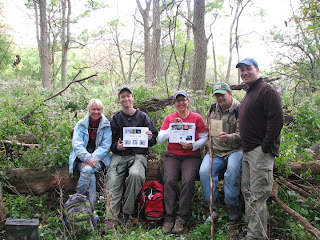 Afterwards we celebrated with a big smiley face cookie in the parking lot, said our goodbyes and everyone headed home. 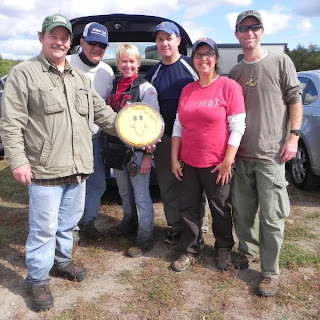 That evening we all started uploading our pictures onto Facebook so we could all see each other’s photos for the day.  I uploaded my picture of 5 of us clowning around on the car.  All of a sudden everyone from Mary’s group started chiming in on my picture with these comments….
“Way too funny . . . . . remember . . . . we were there before you!!!”
“That is freakin' hilarious!”
“Okay, guys . . . . check out GC2G5YM and guess where it is????”
“Name of the cache is "Needs a Jump" and it was placed by ShazamMan along with BAT and TomEagle55 present”
So, here's what happened.  When Mary’s group stumbled upon the same car earlier in the day, (actually about an hour before us it turns out) they had the same thought – great place for a cache.  One of them actually had a cache container with them so they placed it, finished up the stages for Out of Sight, went home and had the new cache published.  In the meantime, we came across the car and had our little photo session, never seeing or realizing that a cache was hanging from the tree right over our heads.   If you look on the tree branch directly over the hat of the guy in the middle of the picture, you can just make out the gold cache container.

I have to admit that it was pretty funny.  They then borrowed my picture from Facebook and added it onto the cache page.  You can see the actual listing at GC2G5YM.
You just can’t plan a thing like that.  We all thought it was hysterical.  Not only was that day one of my favorite caching days ever, it was also the funniest.
I am now an Honorary Author over at CacheCrazy so from time to time my posts will appear simultaneously on my blog and theirs.  Be sure to stop over and see whats going on with them!
Posted by Kim@Snug Harbor at 1:00 AM

Email ThisBlogThis!Share to TwitterShare to FacebookShare to Pinterest
Labels: funniest, geocaching, Needs a Jump, Out of Sight, woods