Between the north and south

I am a girl who has one foot firmly planted in both the north and the south.  My speech patterns switch between “Hey” and “Y’all”  as smoothly as a good Kentucky bourbon.  You see, I was born and raised in Chicago, but I have spent most of my summers and vacation time in either Missouri or Kentucky.  And while Missouri may not technically be as “southern” as Kentucky or Tennessee, it was still close enough that by August of each year I would return home with a southern drawl that took until late September to lose.
I believe that I have grown up blessed by a little of both worlds.  Winters in Chicago were spent tobogganing, ice skating and sledding.  Each summer down south I was occupied with fishing, swimming and canoeing.  I can still clearly remember the first time I ever caught a fish.  I was sitting on the dock at Lake of the Ozarks, fishing with a minnow strung onto the end of a pole with a bobber as big as a beach ball.  I will never forget the thrill of landing that first crappie and I can still remember the smirk I got on my face when my dad called it a crappie, pronouncing it like crap.  Hmmm….  Dad said a swear word and I could get away with it every time I went fishing.  I don’t know which was the bigger draw for me – saying a swear word or watching my dad fillet up that one tiny morsel for my mom to dredge in flour and fry in a pan.  Either way, I was hooked on fishing for the rest of my life.
When we were down south, we were each given a dime on Tuesday's and Thursday's.  We would stand in front of the pop machine, wavering between Orange or Black Cherry Crush in the bottle.  Being up north meant drinking only RC and only on a Saturday night.  Being down south meant we took baths in the lake and ran around shoeless.  Chicago meant daily showers and patent leather shoes and socks.
Summer days were spent rowing my sisters across the lake to The Patio for a hamburger and a thick chocolate shake. 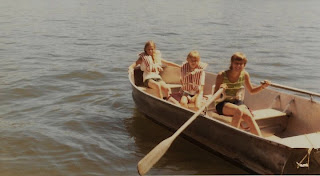 We skipped rocks and had nighttime campfires where we roasted hotdogs on sticks and then made S’mores with gooey marshmallows for dessert.  But by the beginning of August I was craving Chicago beef sandwiches drowned in gravy with hot peppers or thick crust pizza topped with sausage, green peppers and onions, or hot chocolate with a peppermint stick.
The south gave me my love of Johnny Cash, Porter Waggoner, Lee Mace’s Ozark Opry, beautiful Bridal Caves and walking down a dusty road everywhere.  The north gave me The Monkees, The Fifth Dimension, Peter, Paul and Mary, The Museum of Science and Industry, pavement and taking a bus anywhere I wanted to go.
By the time I hit my teens I was spending the dog days of summer dangling my feet from the lower level of the bridge spanning the lake, sneaking Marlboro’s and listening to The Allman Brothers or Lynerd Skynerd.   Winter weekends found me waitressing and drinking Boonesfarm and Ripple while dancing to Neil Diamond, The Moody Blues and Elton John.
When I met my husband, we gradually drifted over the border to Kentucky, but we still split our time between the north and the south.  On frigid, winter nights when I’m out plowing snow, my thoughts turn to summer days that will be spent on the lake, campfires and S’mores.   Those are the thoughts that keep me going, hour after snowy hour.  And when the end of summer rolls around and the intense heat has taken its toll, I find myself once again longing for Chicago, and the cold north wind that howls in across Lake Michigan.
Some things have changed a little – like the cigarettes I gave up and the wine drinking that switched to Margarita’s.  But some things never change, like kicking off my shoes on May 1st and having naked toes until Labor Day or slipping on my bathing suit before breakfast while at the lake.  And I still like to make snowmen in the dark after the first good snowfall.  Sometimes even while drinking a margarita and listening to The Moody Blues!
I have come to the conclusion that I have a gypsy soul and a restless spirit.  I was blessed enough to be steeped in the rituals of 2 distinct regions of the country and I love them both.  Each pulls at my heart when I am away and I return to both with happiness and leave each with a tinge of sad.  It’s strange how I feel at home in both places.
Until next time - Night y’all!
Posted by Kim@Snug Harbor at 1:45 PM