Yesterday turned out to be a pretty nice day – warm, close to 60 degrees and a light breeze.  I decided to get Sparky out of the garage and take her for a ride.  Sparky is my kayak. 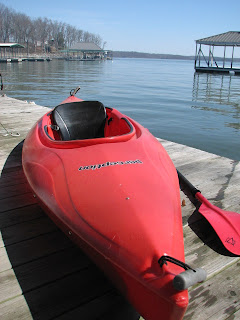 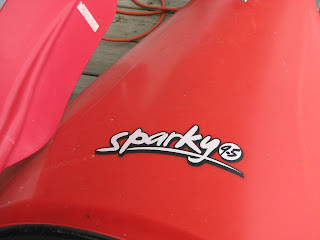 My husband bought me this kayak a couple of years ago and I love it.  I practically grew up in a canoe.  When I was about 10 years old, my Uncle Bob, who was an avid canoeist, decided my sisters and I needed to know how to canoe.  Every year, Des Plaines, IL has a big canoe race and he would always enter it.   The Des Plaines Race has been going on for over 50 years.  It’s an 18 mile long race along a beautiful and scenic waterway and involves both portaging and running over several dams.  For information about the race, look at this:  http://www.canoemarathon.com/information.cfm
Uncle Bob came in 2nd place several times and kept getting beaten by a full blooded Indian every year.  Anyway, he started taking us to Skokie Lagoon and taught us how to use the canoe.  Skokie Lagoon is located along the North branch of the Chicago River.  When the Civilian Conservation Corps started the lagoon project in the 1930’s, it was the largest CCC project in the nation.  The entire lagoon was dug out almost entirely by hand and moved with wheelbarrows. We spent so much time at the Lagoons that we practically knew it like the back of our hands.  You can read about this great area here:    http://www.chicagolandcanoebase.com/conserve_skokie.html
Eventually, my dad bought us a canoe and every summer we would tie it on to the top of our car and drive down to Lake of the Ozarks in Missouri for a couple of weeks.  My sisters and I would paddle out into the lake and purposely tip the canoe over and then swim underneath it.  A huge air pocket would form underneath the seats and we’d swim around under there and giggle.
Anyway, I thought a kayak looked like fun, so my husband bought me one.  The first time I went to get into it was in early March and the water was still really cold.  I pushed the kayak off the dock and jumped in.  I just assumed it was like a canoe, but the center of gravity is a little different.  My feet landed in the bottom of the kayak and it immediately tipped over, throwing me headfirst into the icy water.  I don’t think I ever leaped out of the lake as quickly as I did that time.  Talk about cold!  Lesson learned.
Actually, the kayak is really easy to handle, especially for me since I am rather small, and I enjoy it a lot more than the canoe.  To begin with, it’s easier for me to maneuver around by myself.  It’s much shorter than our old canoe, so I can paddle it quicker.  I can also haul it in and out of the lake by myself.  It’s really good exercise.  I like to paddle out to the mouth of our bay and then float back, just enjoying the sun.  After a while, my daughter started spending so much time in MY kayak that we had to go buy her one too.  Now we spend hours paddling around the lake together.
Yesterday was the first of many hours that will be spent this year in Sparky.  I have been working out with hand weights all winter and it must have really helped, because I wasn’t sore at all.  Here is a glimpse of the lake. 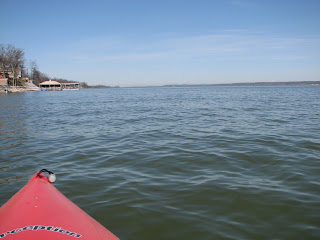 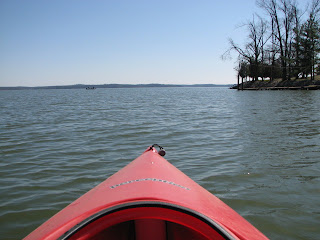 Right now it is raining like crazy so there will be no lounging around in Sparky today.  I’ll leave you with a picture of my wagon wheel.... 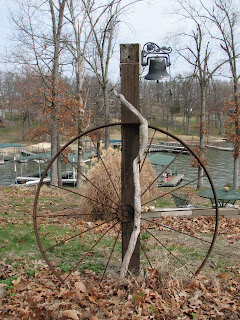 and my daffodils.  Aren't they pretty?  Have a great day! 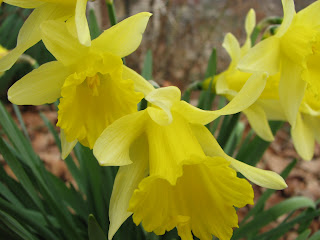