I've been wanting to take a drive up to Devil's Lake State Park for the longest time.  I used to go camping and snow skiing up there when I was in college and I haven't been back in about 25 years.  Devil's Lake is located outside Baraboo, Wisconsin and is situated along the Ice Age Trail.  It's a beautiful area with miles of hiking trails leading to landmarks known as Balanced Rock, Devil's Doorway, Elephant Rock, and Croc Rock.  Since it's a 2 1/2 hour drive from home, we wanted to make a day of it.  We got up early, checked the weather forecast for the area, which predicted clear skies, cool temperatures and a 40% chance of evening showers.  We figured we'd be out of there by 6:00 pm, so we were good to go.
﻿
﻿

After stopping for a hearty breakfast, we detoured into Lodi, Wisconsin to grab a couple of geocaches and drive past a cabin we used to rent before our kids were born.  The cabin we used to rent has been torn down, the bait shop and the grocery store we used to go to are closed, and the main restaurant is being enlarged and remodeled.  Chablis and Louie sat on a bench while he told her the story of the huge walleye he caught there. 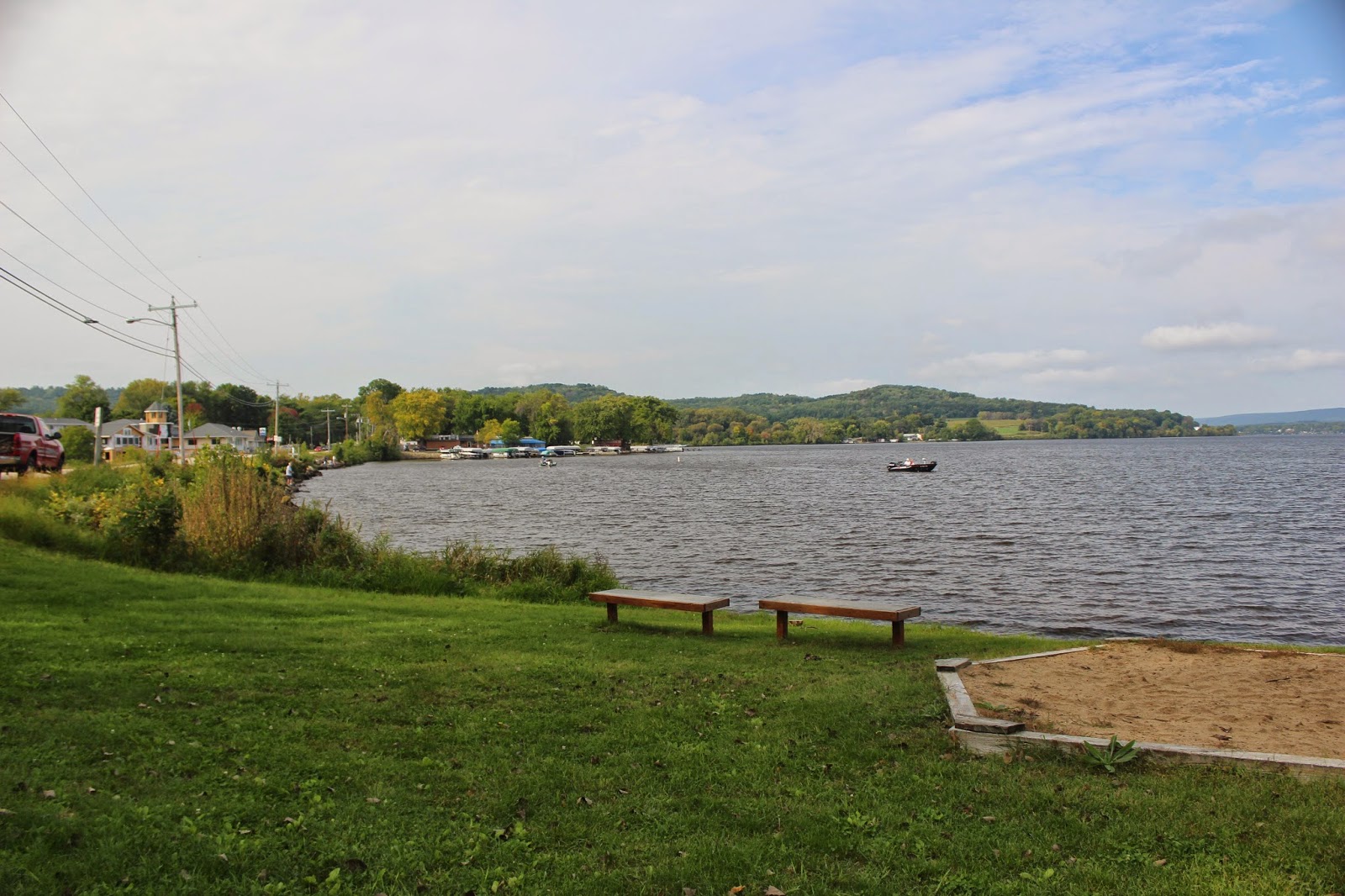 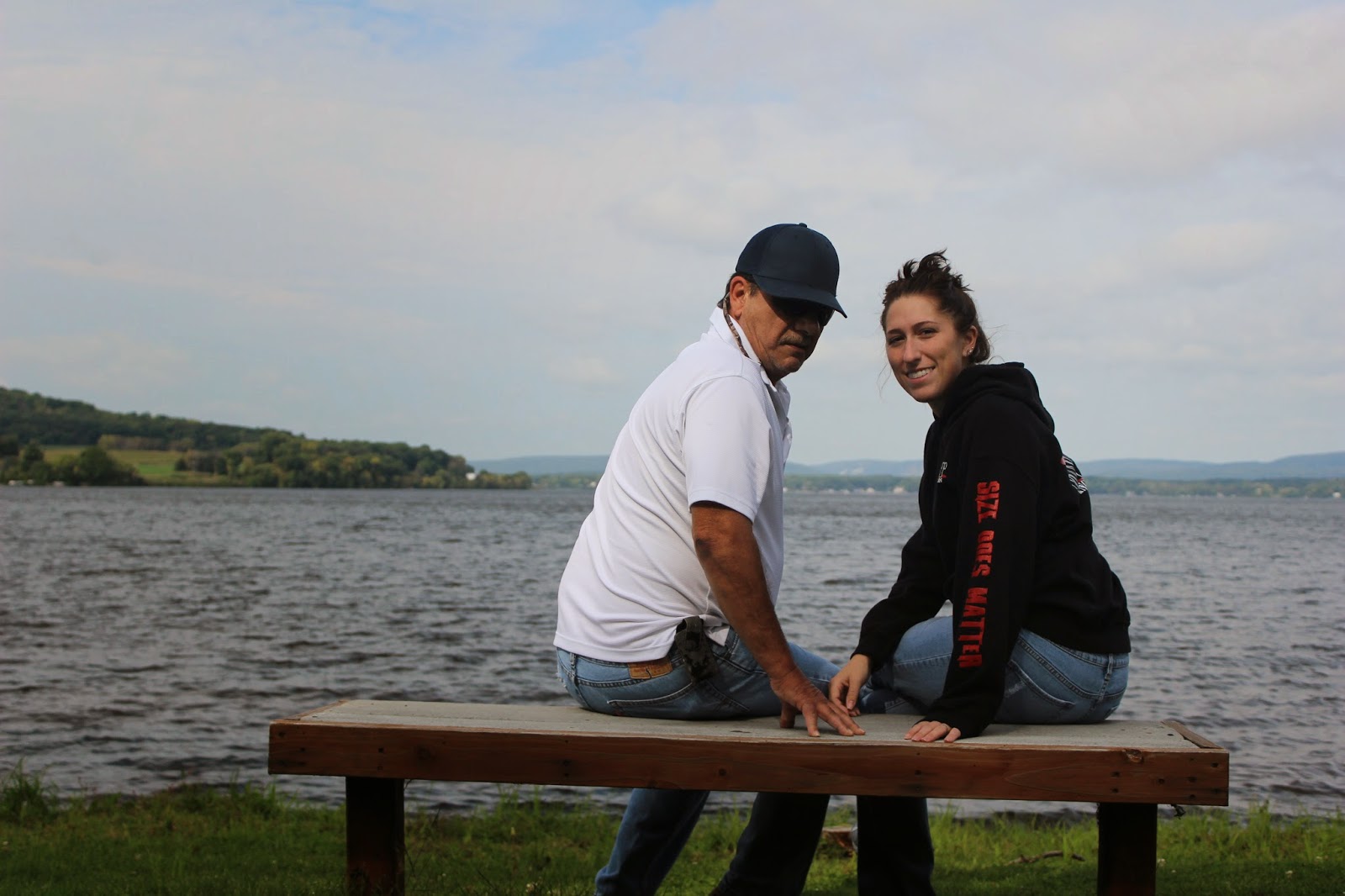 We headed on down the road and waited for the ferry to take us across the Wisconsin River.   The last time we were on the ferry Chablis was only 3 years old.... 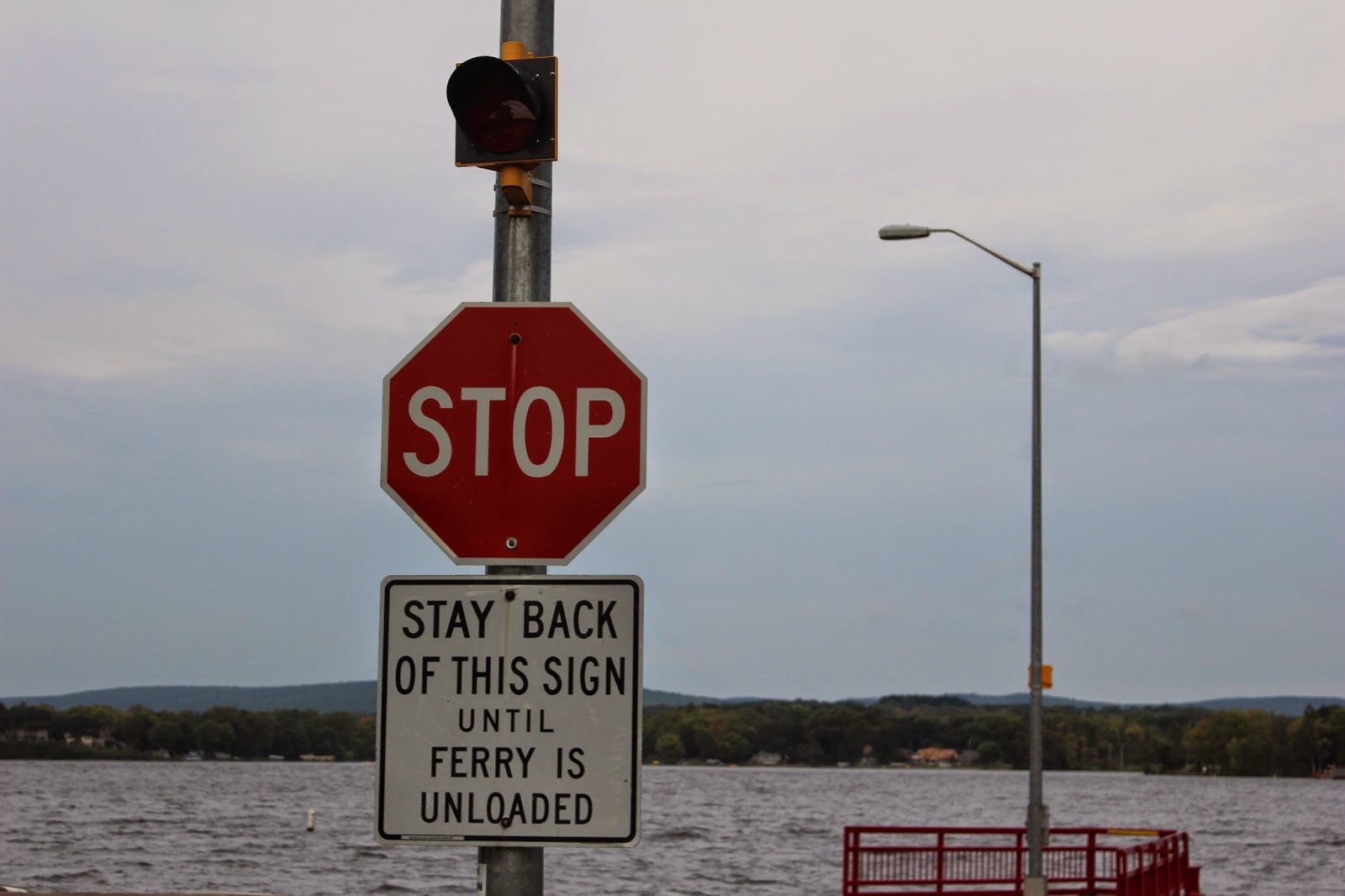 I had forgotten that this was near the Gibraltar Segment of the Ice Age Trail and I reminded Louie of when we hiked to the top of Gibraltar Rock almost 3 years ago to the day.  How weird is that? 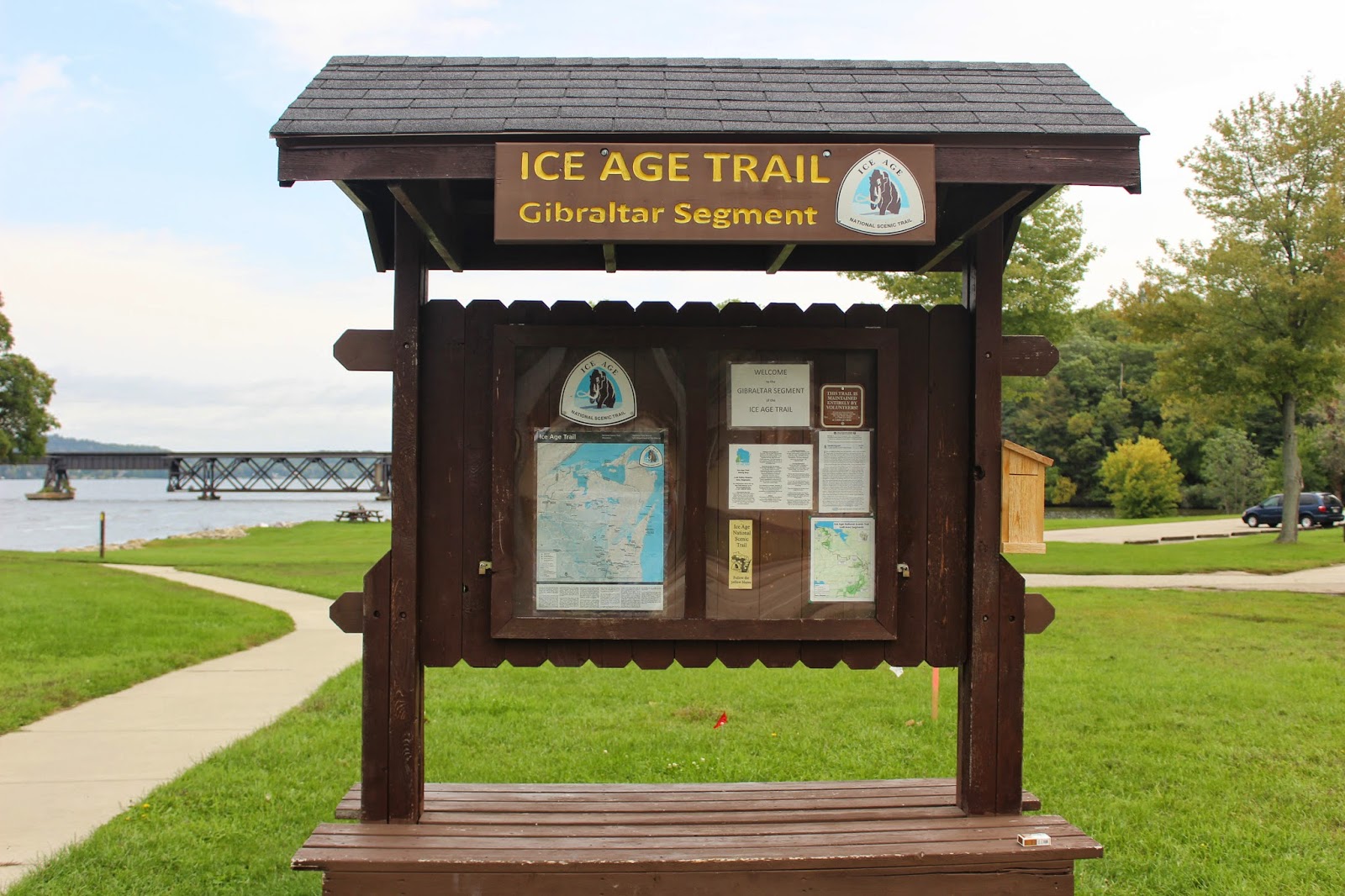 As we headed across the river I noticed the dark clouds rolling in and the strong and steady chop of the water.  That wasn't looking too good! 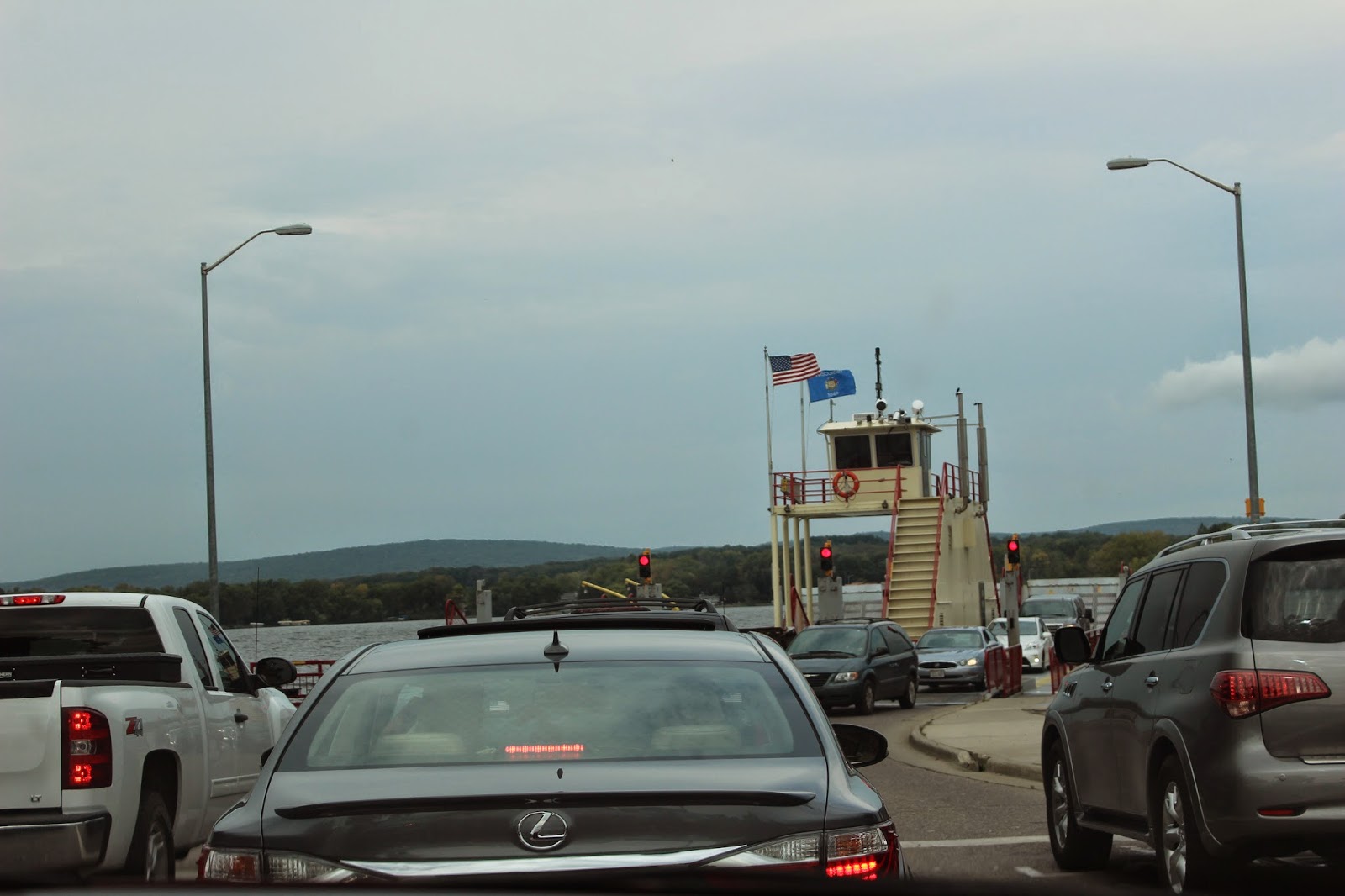 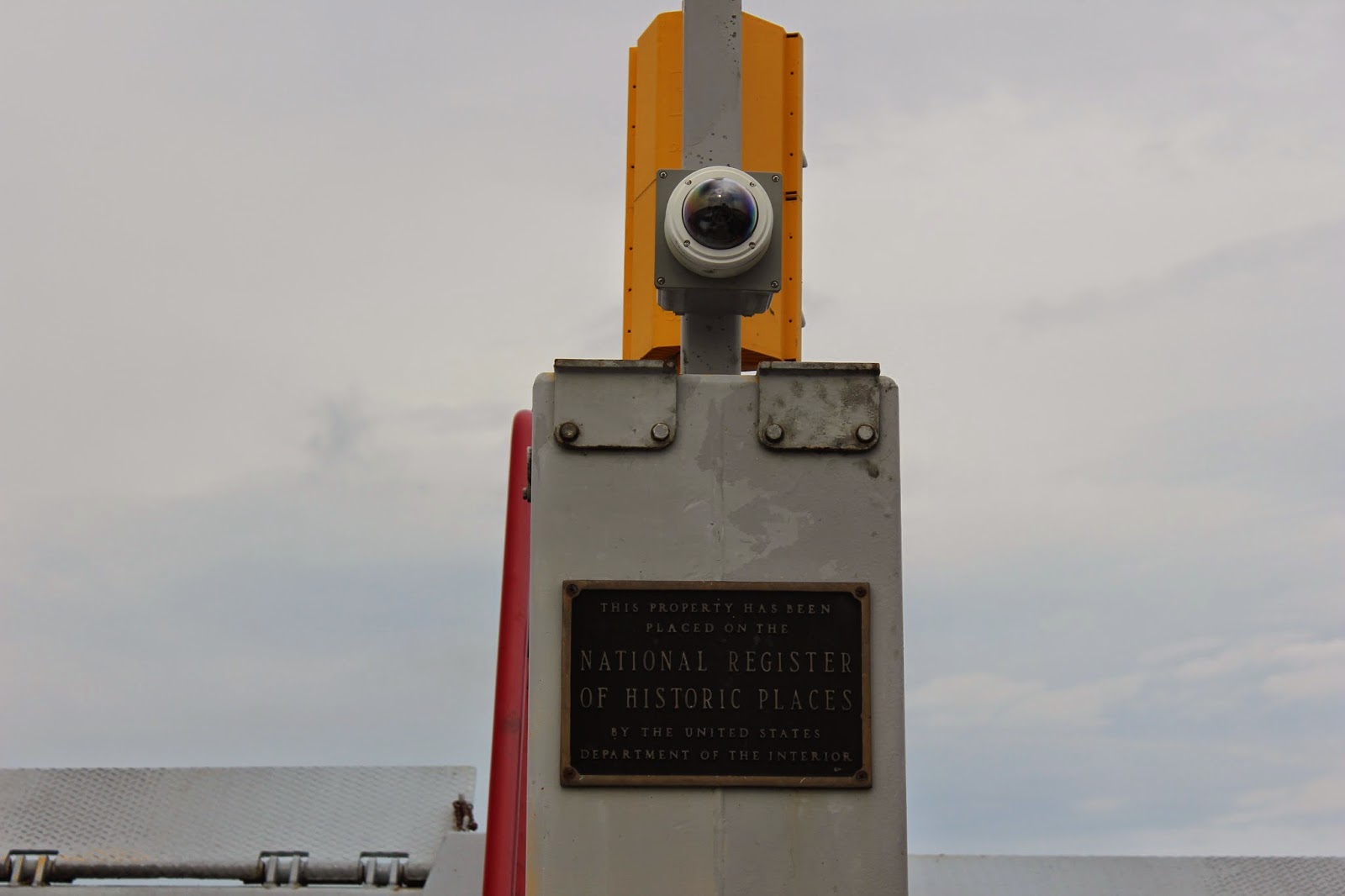 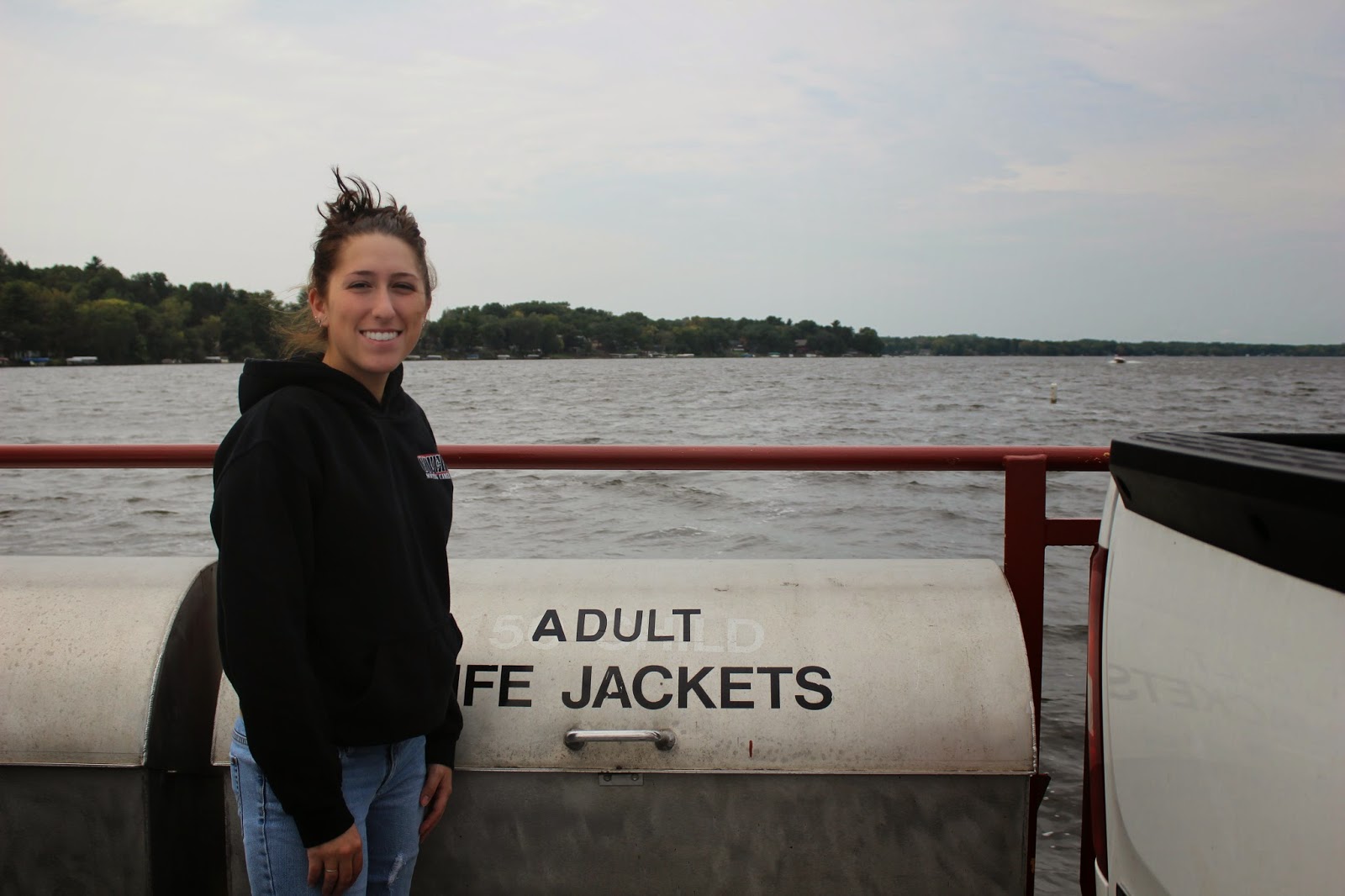 Once we crossed the river we stopped at Goette Road Bridge to find a quick geocache.  This bridge is Wisconsin's earliest known single vault, stone arch railroad bridge.... 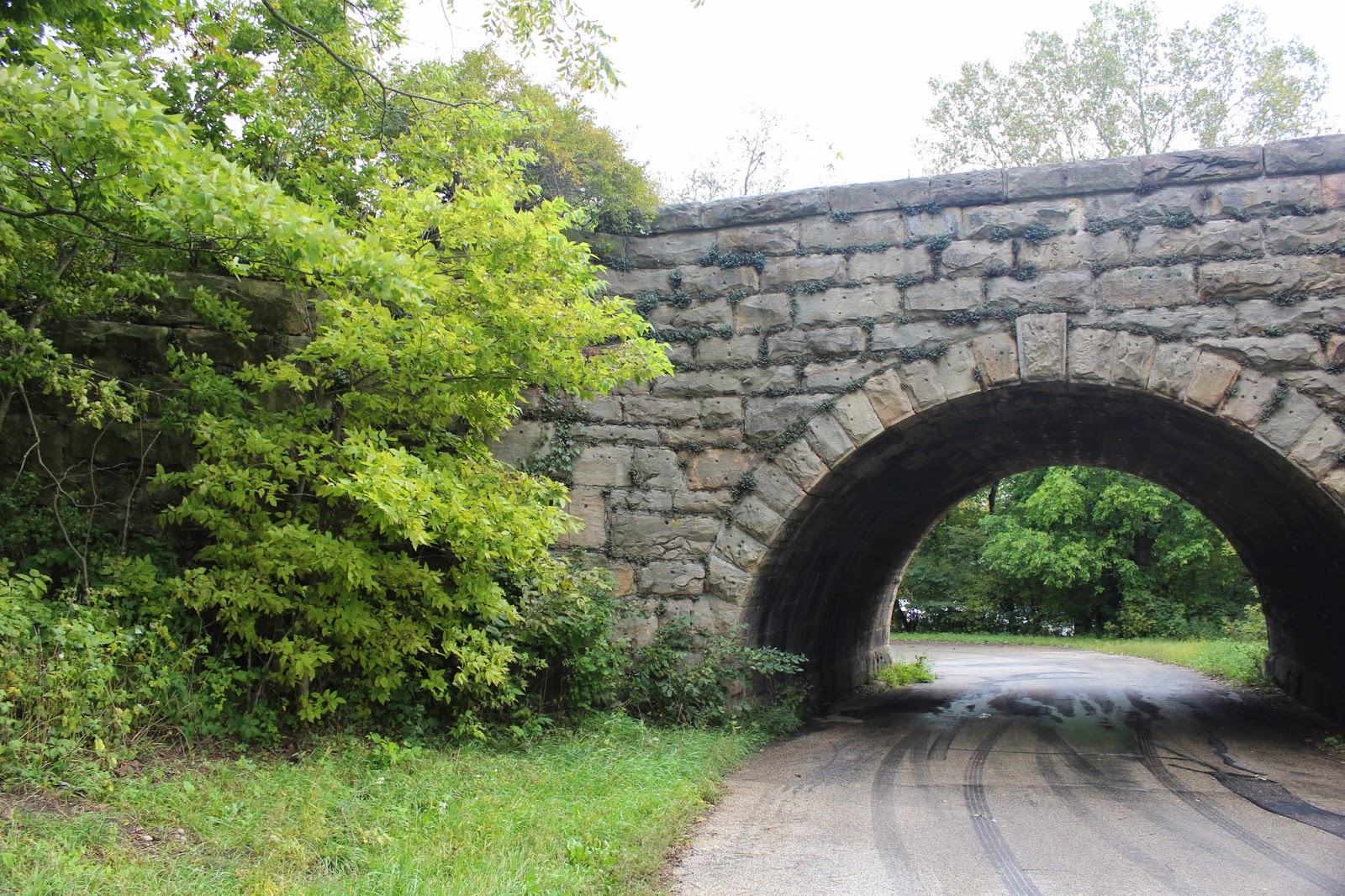 From there we were only 5 minutes away from Devil's Lake.  We pulled into the state park expecting to see a line of cars, but we were pleasantly surprised to see only 3 cars in line to pay for entrance.  We were thrilled to be able to park less than a block away from the trailhead to Balanced Rock, which was the first stop on our ambitious hiking plan for the day.  We planned on doing the trail to Balanced Rock and then continuing on from there to 3 more points of interest along the same trail.   After that we were going to drive around to the north end of the lake and attempt 2 more different trails, grabbing geocaches along the way while we hiked and explored.  We passed this rock on the way to the base of the first trail.... 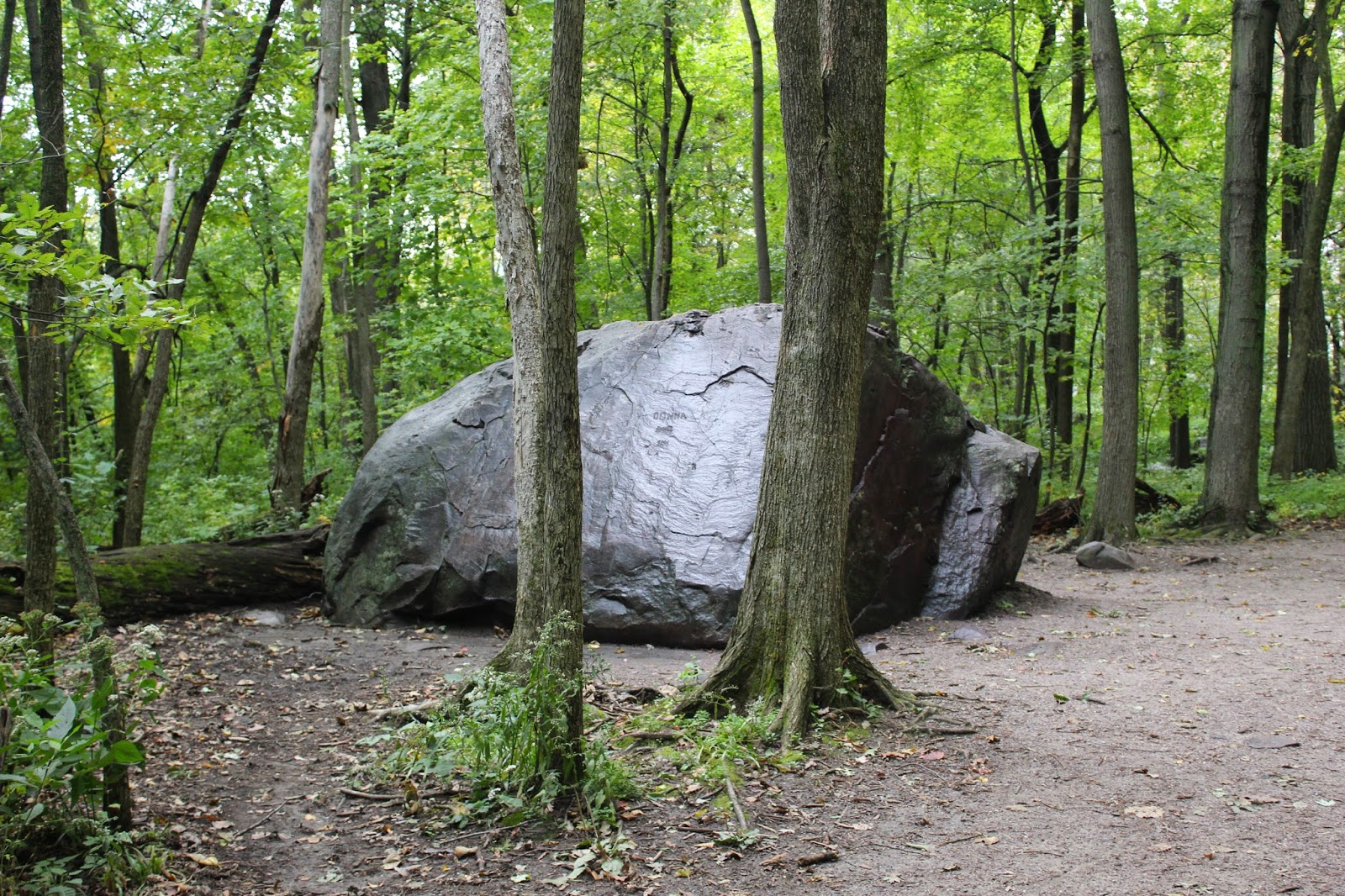 Ahead we could see the base of the mountain and a huge pile of rock.... 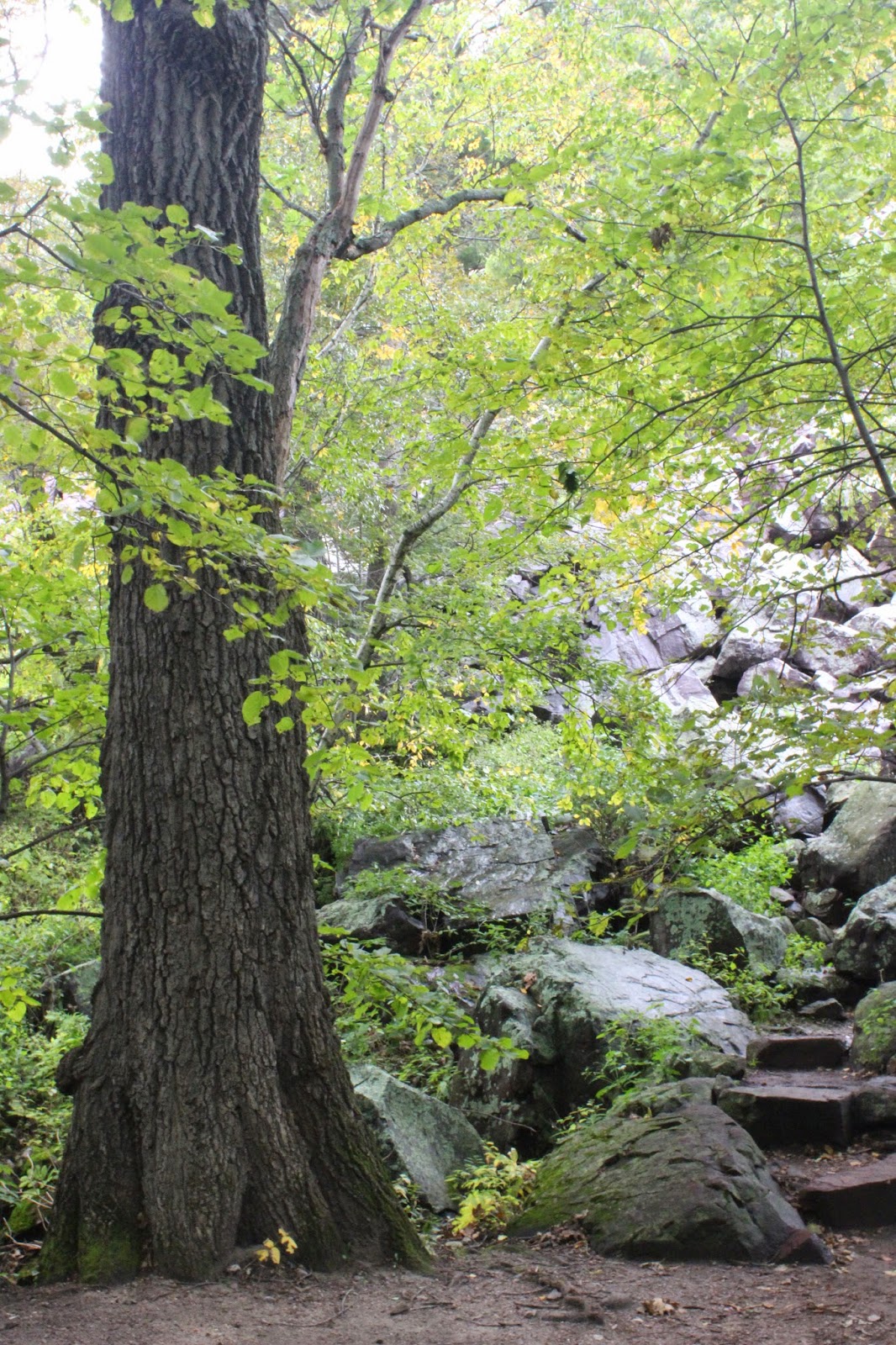 ...and the rock trail leading upwards.... 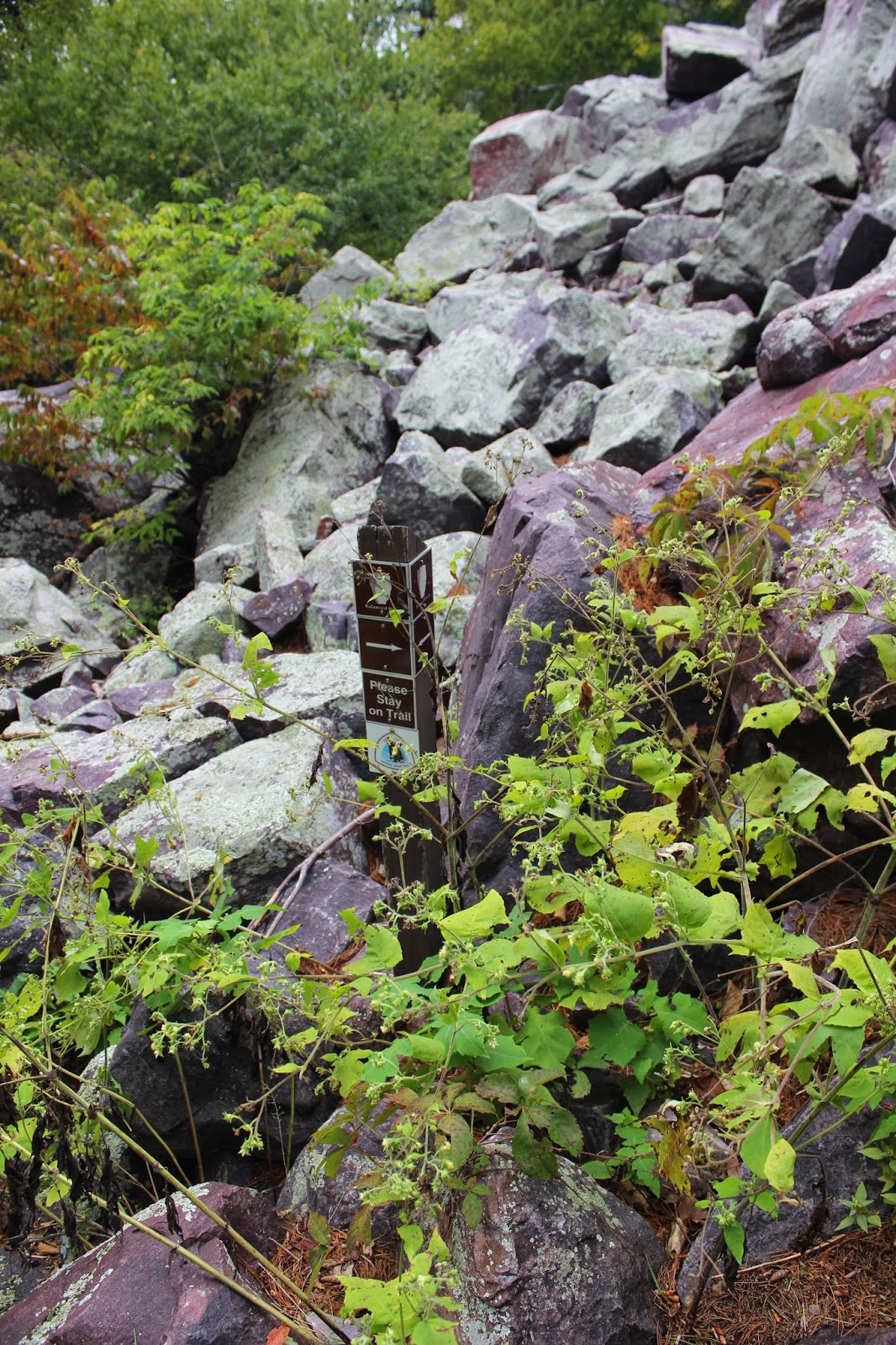 There's somewhat of a rock path leading through the boulders, but you still have to carefully pick and choose your steps along the way.  After about 500 feet I was thankful we had thought to grab the hiking poles... 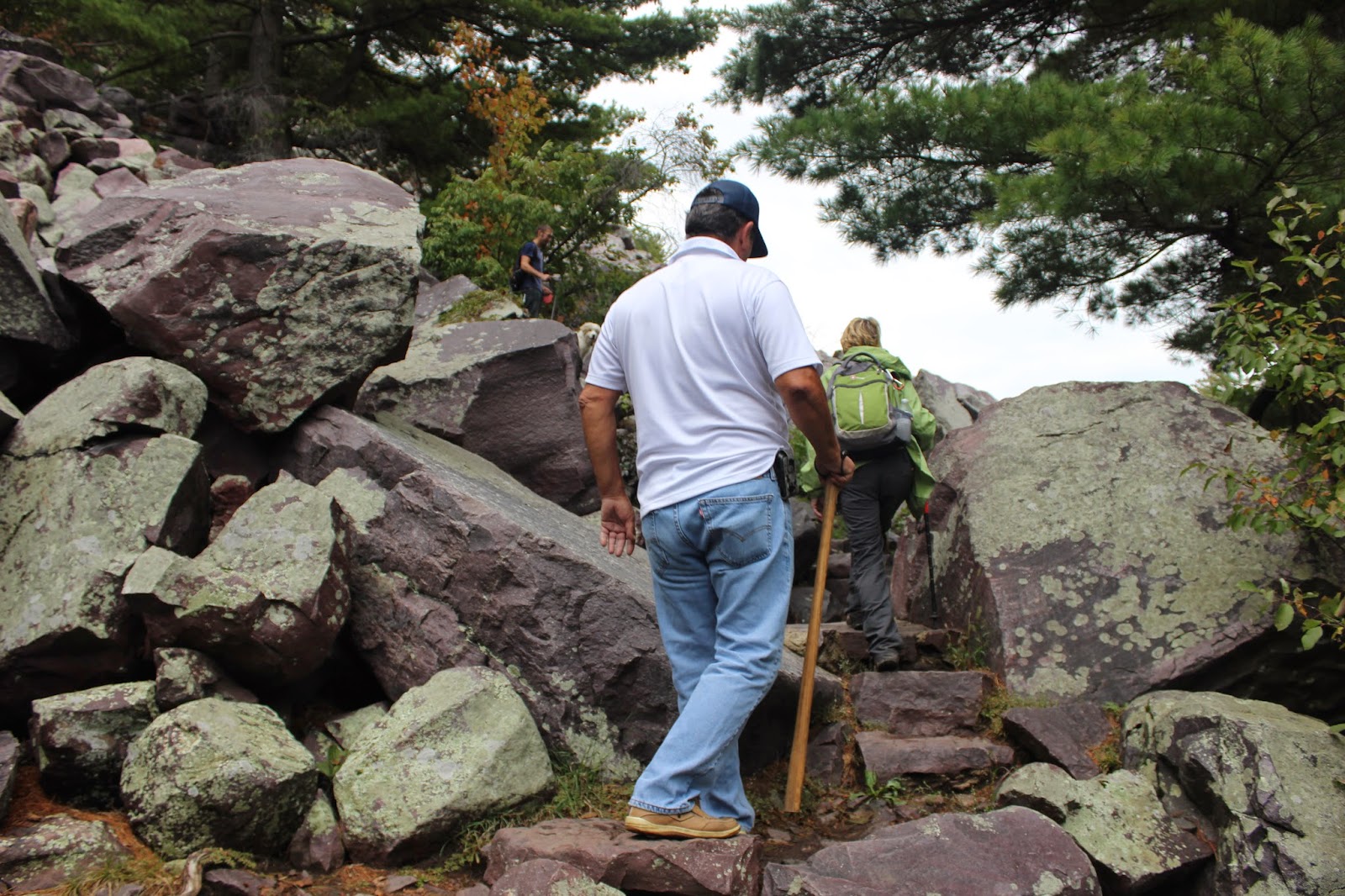 Did I mention that Louie really doesn't like heights???? 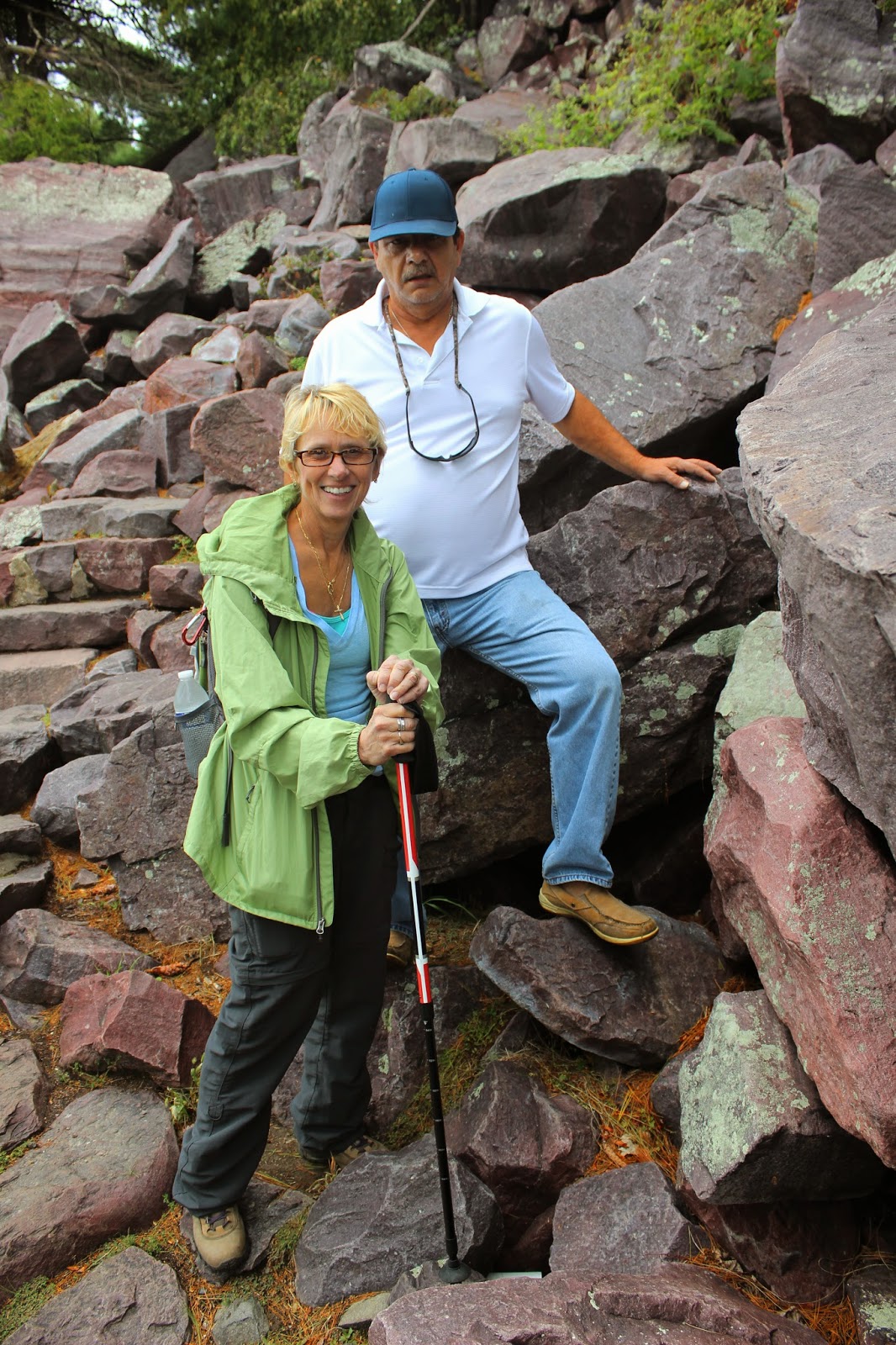 There was a steady stream of people going both up and down the trail.  The trail is quite narrow and anytime we met someone, we had to step back and carefully let people slip past. 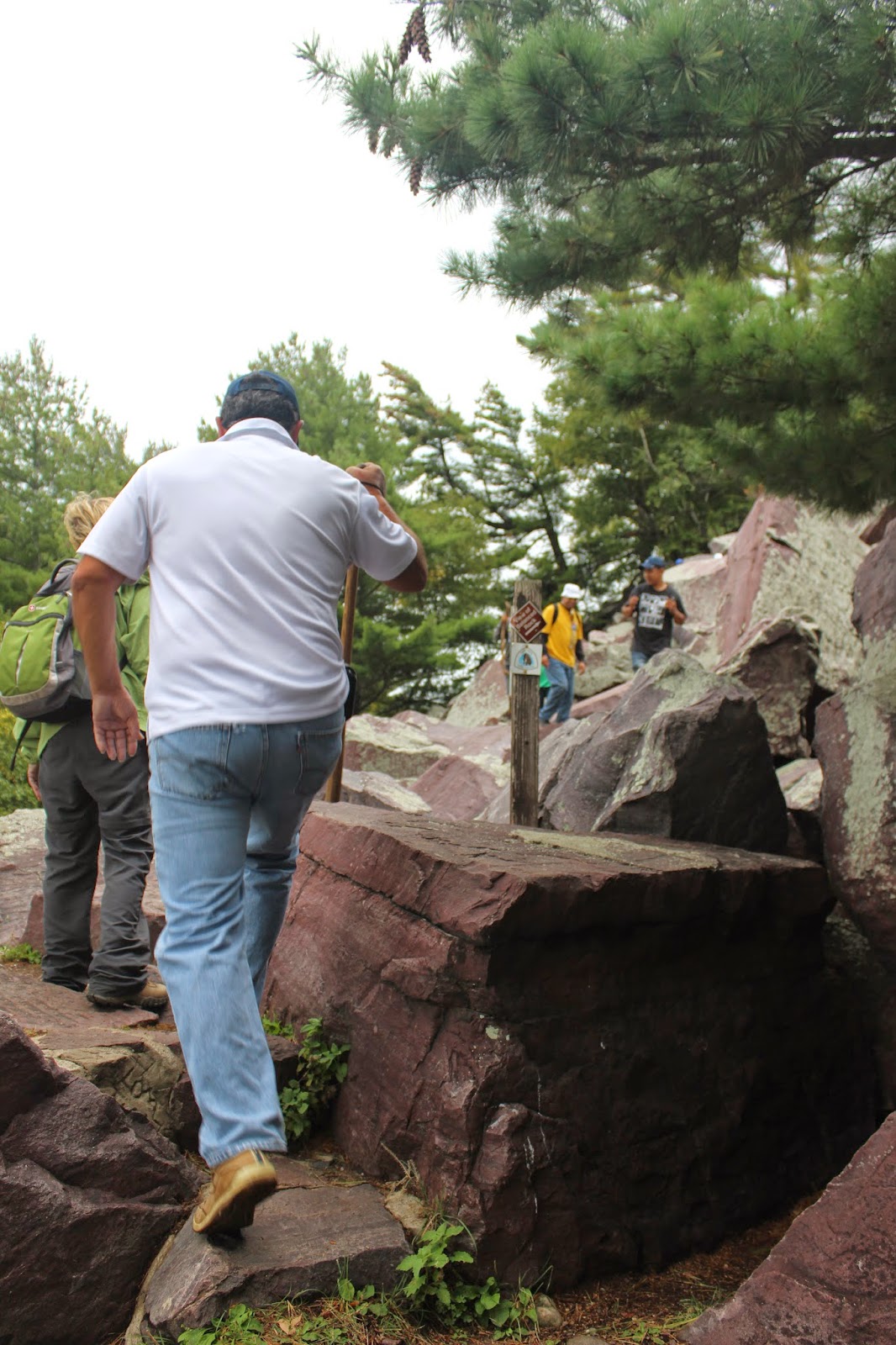 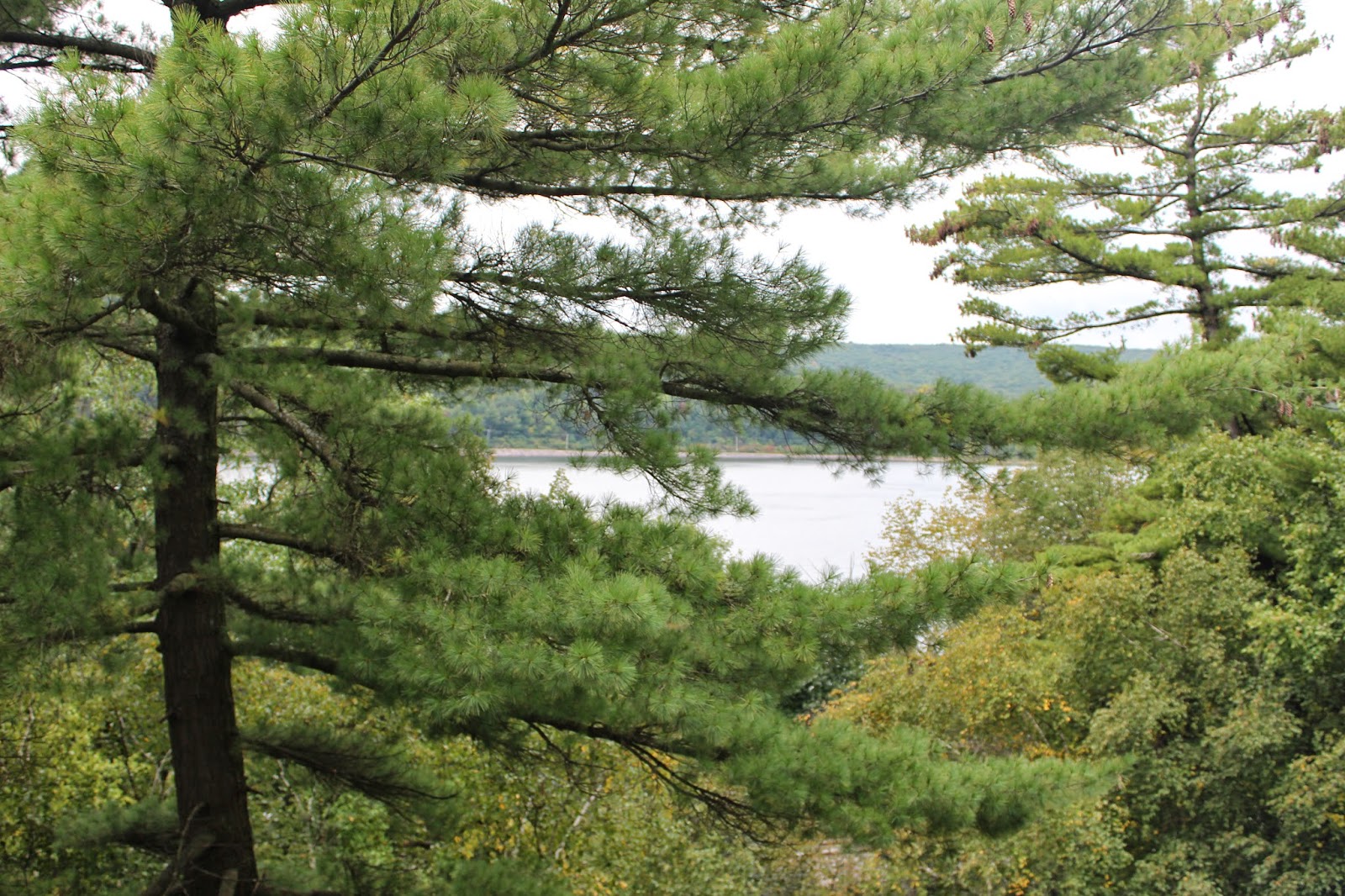 Chablis and I were having a great time climbing around on the rocks.  I wish I could say the same for Louie.  Poor guy just was not enjoying it all that much. 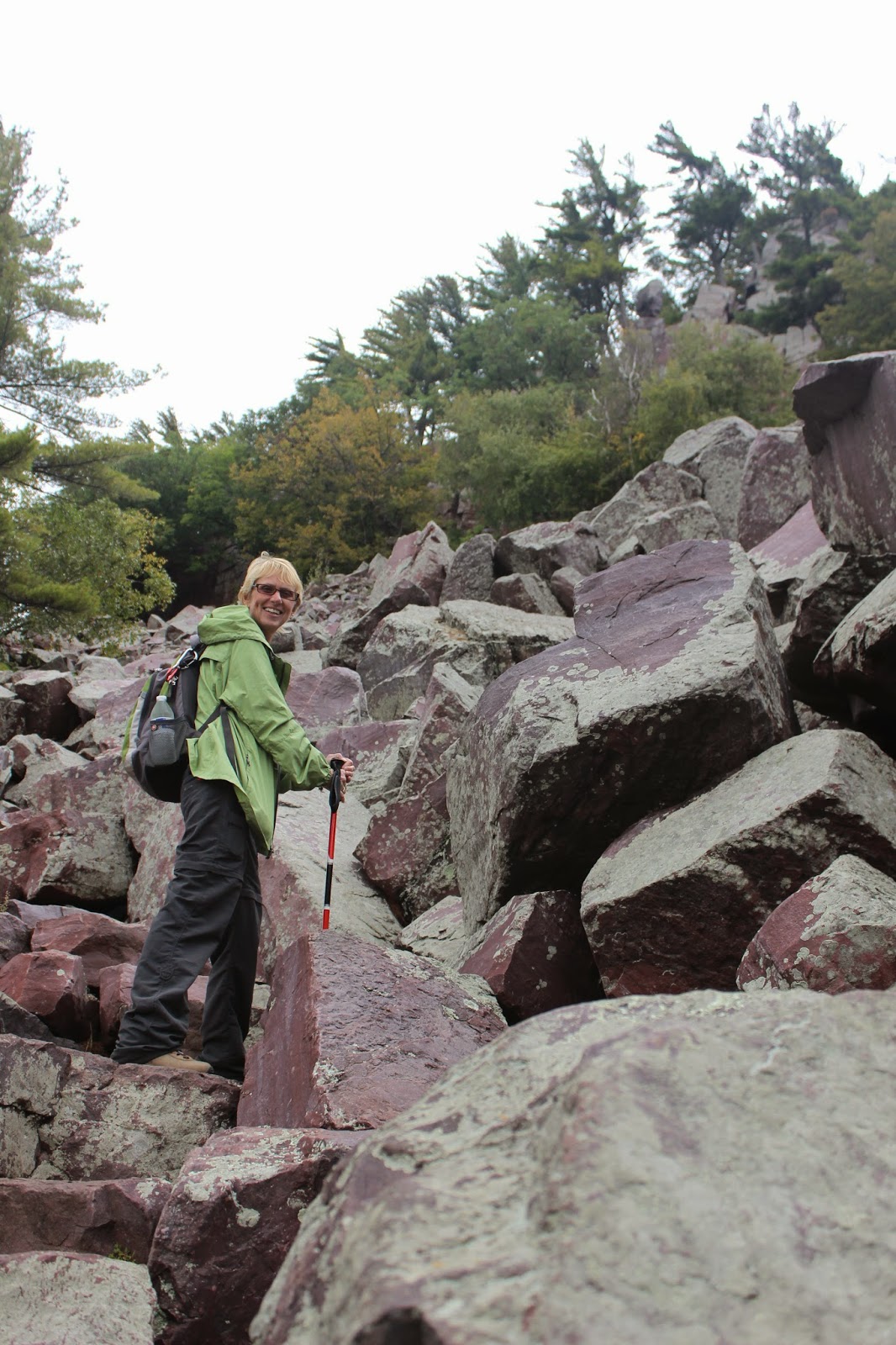 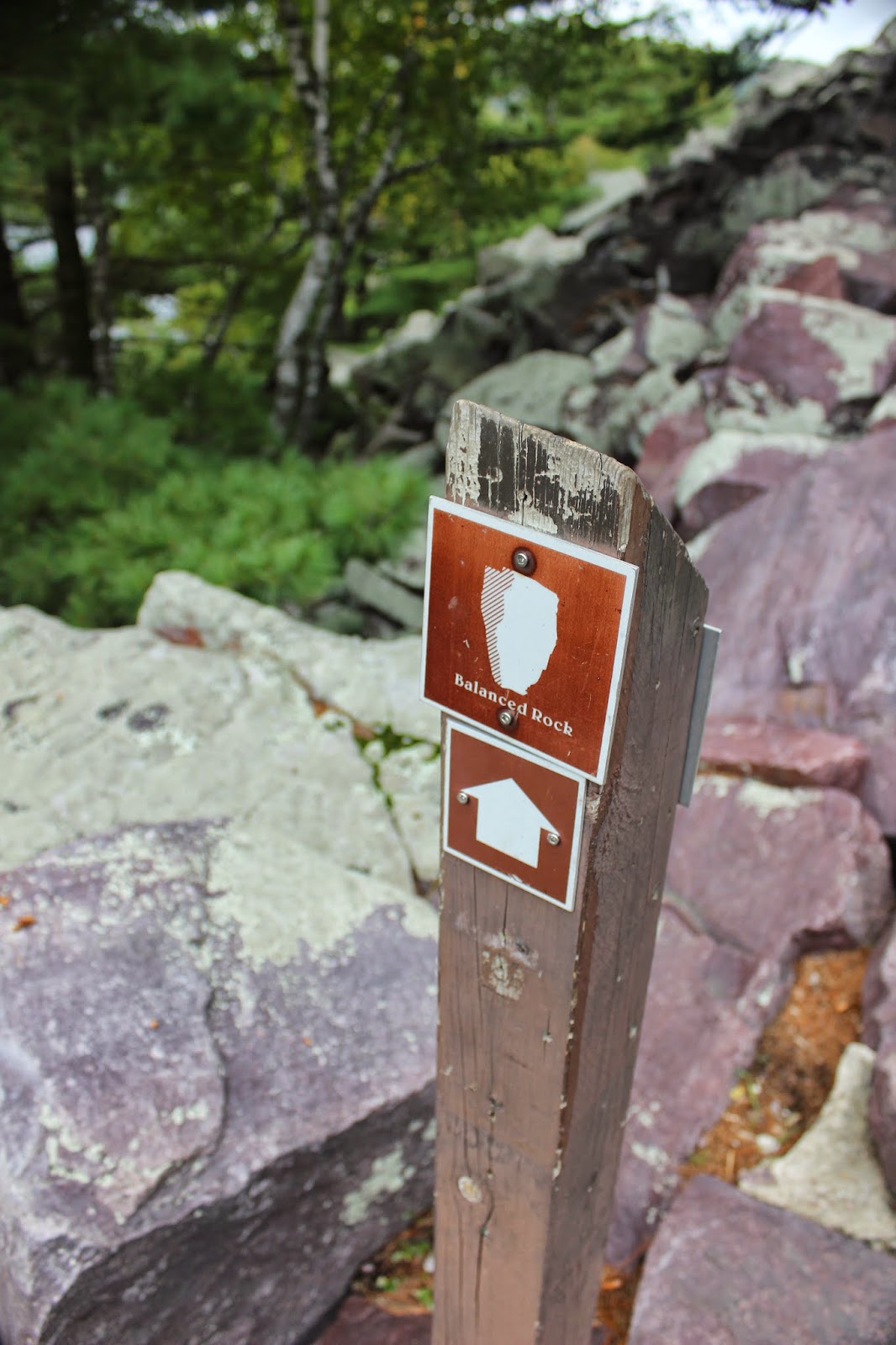 Chablis found a cute little cave to sit inside.  We sat and took a break and drank some water.  I should probably mention that right about that time it started to drizzle.  Apparently the storm front that wasn't supposed to come through until that evening had decided to arrive a bit early. 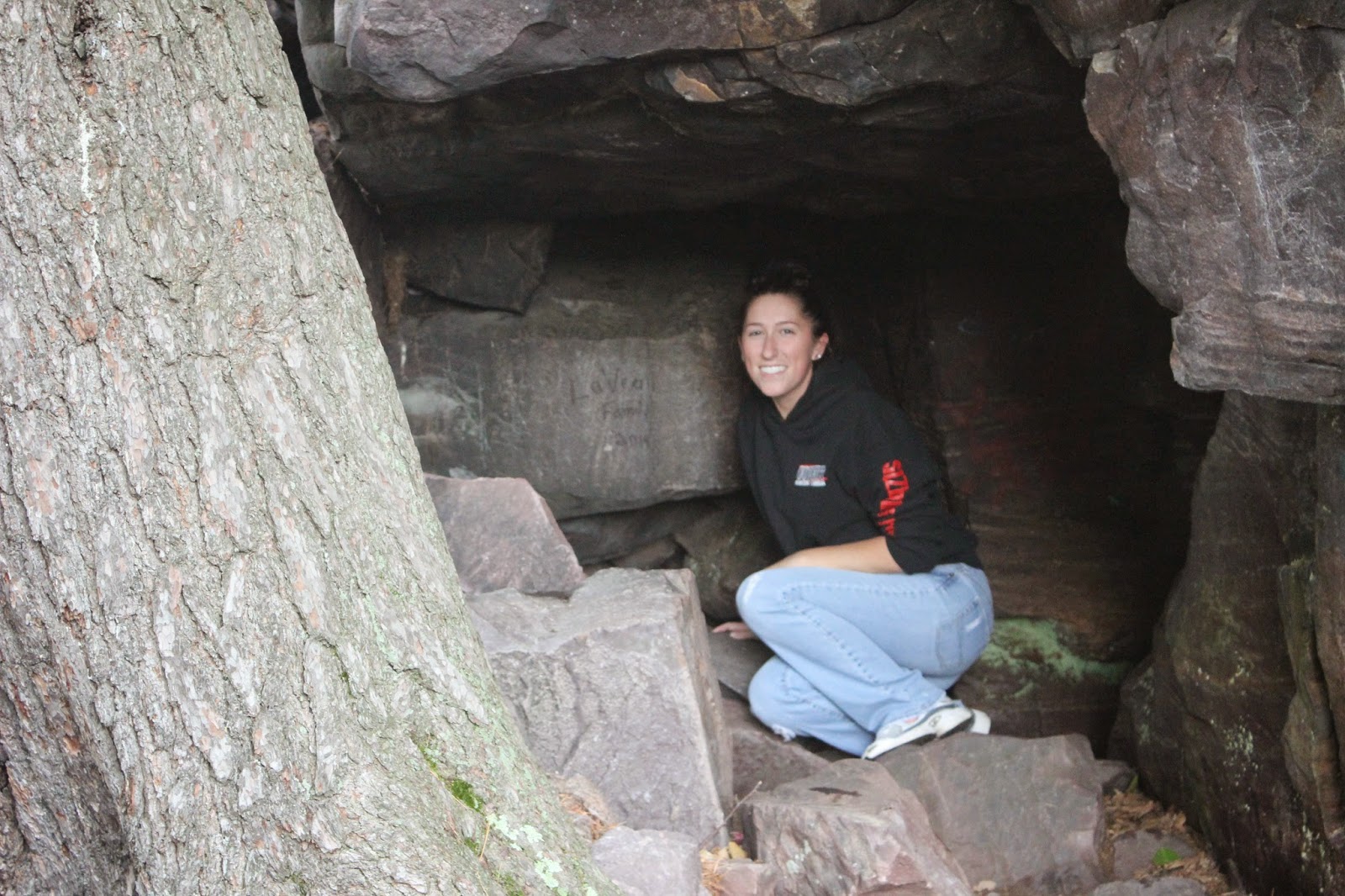 We kept climbing but believe me, I was cursing the rain because the rocks were getting extremely wet and slippery.﻿ 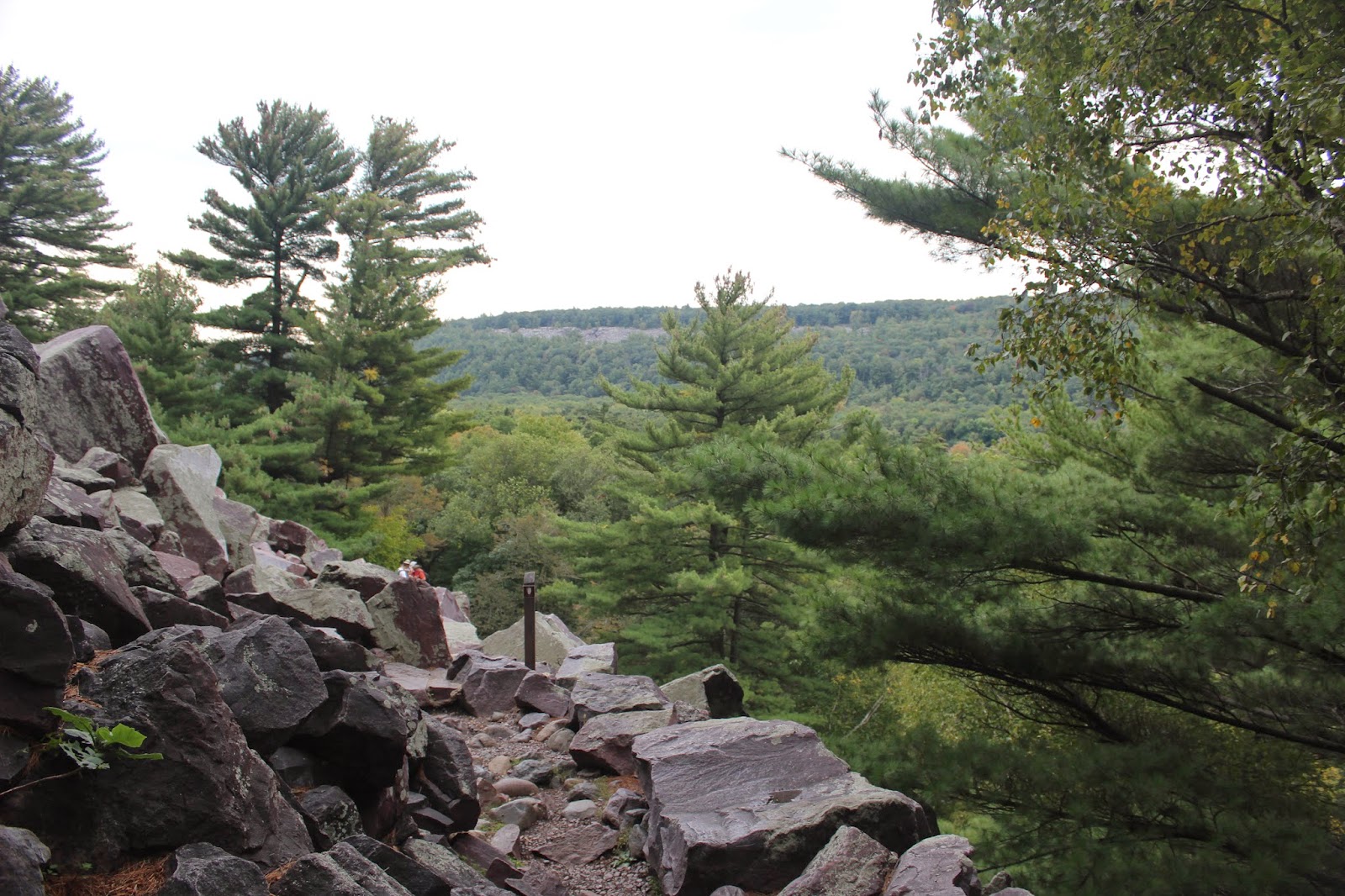 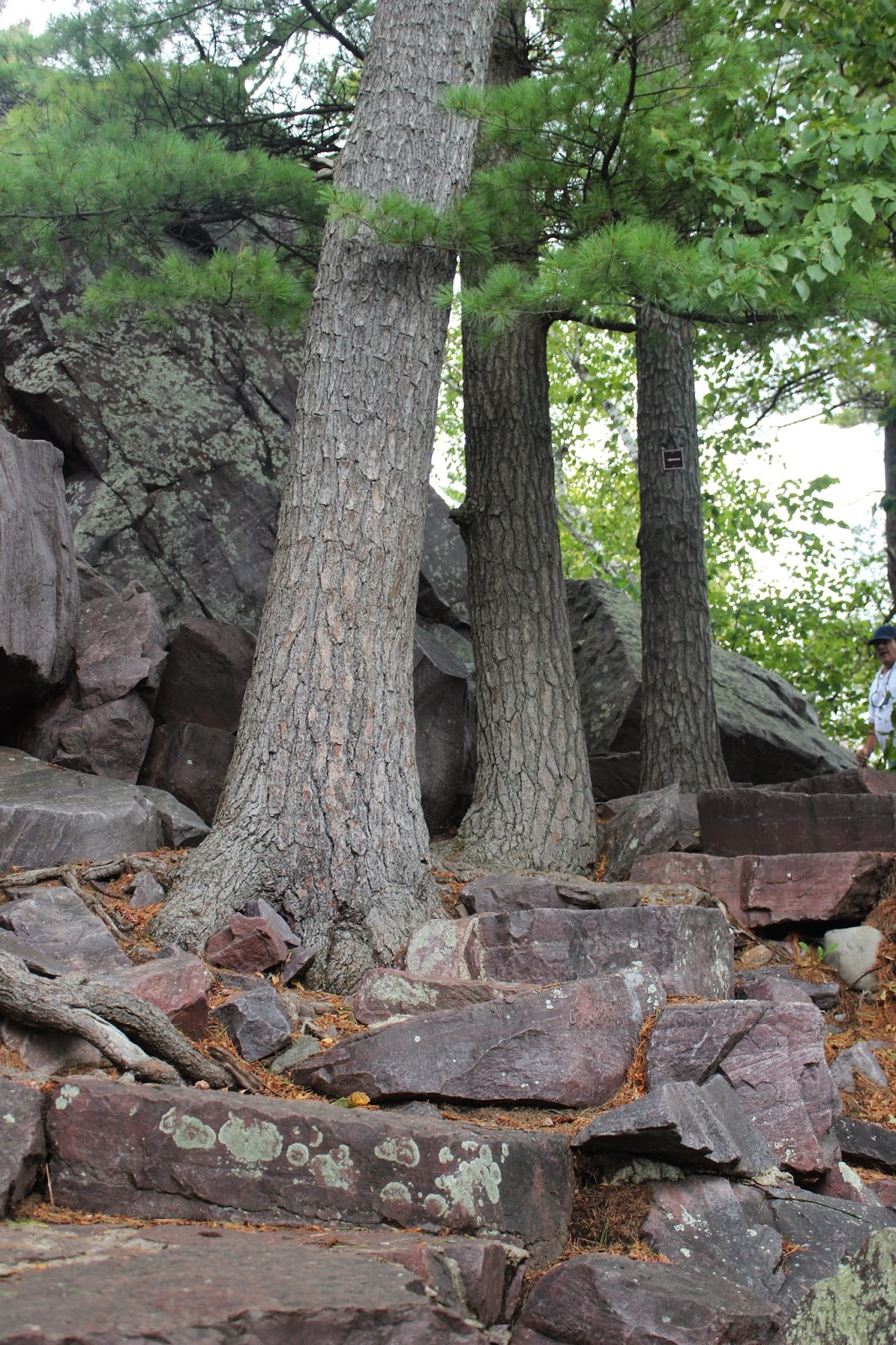 And every time we reached a summit and thought we had reached Balanced Rock, another summit loomed above.... 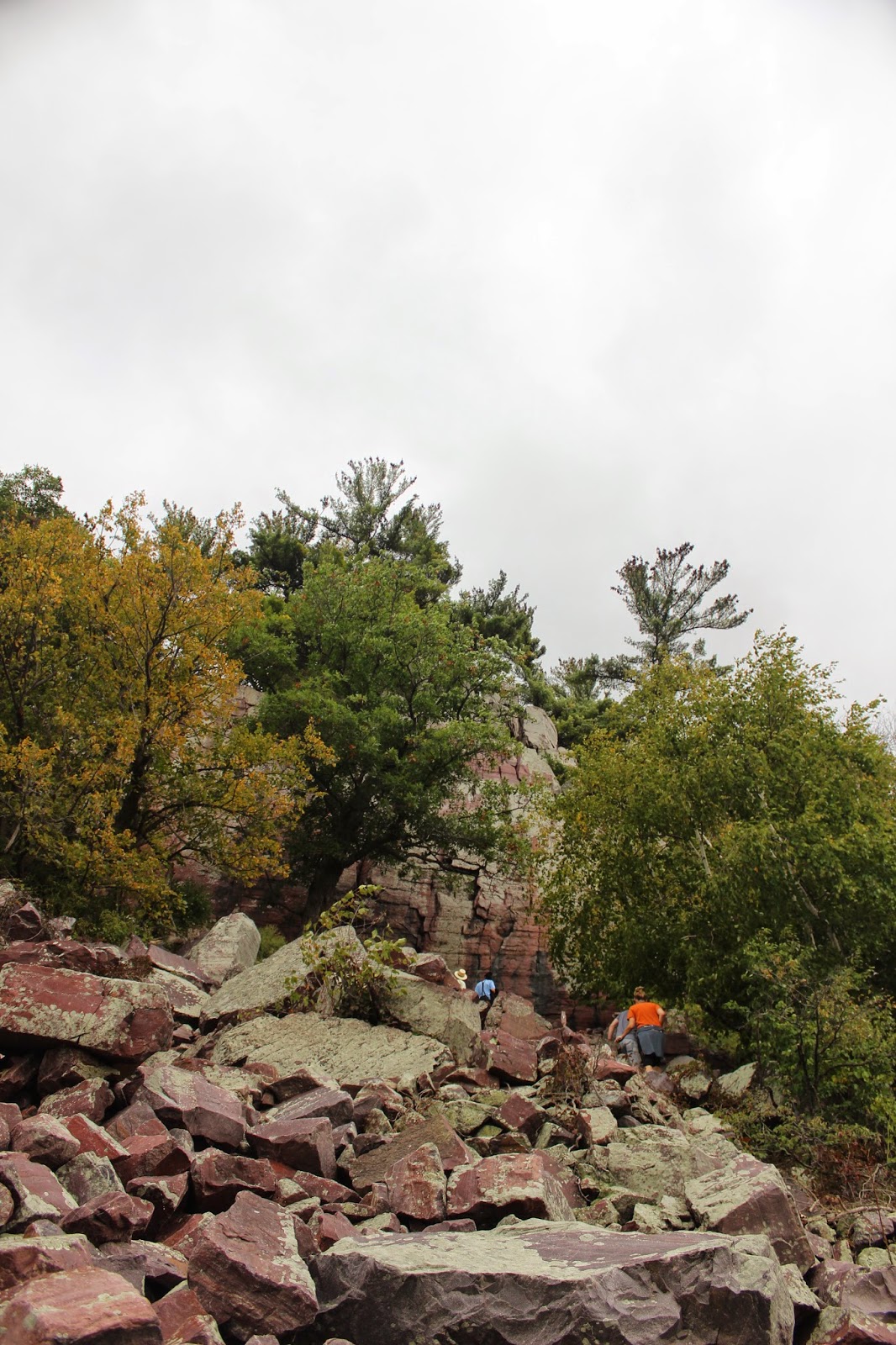 Right around this time Louie decided he was going to sit and wait for us.  The rain was making the trails too slippery and he wasn't taking any chances on taking a fall.  We left him underneath a tree and continued on, promising to call him on the cell phone if we decided to continue on once we reached Balanced Rock.  That's Devil's Lake in the distance. 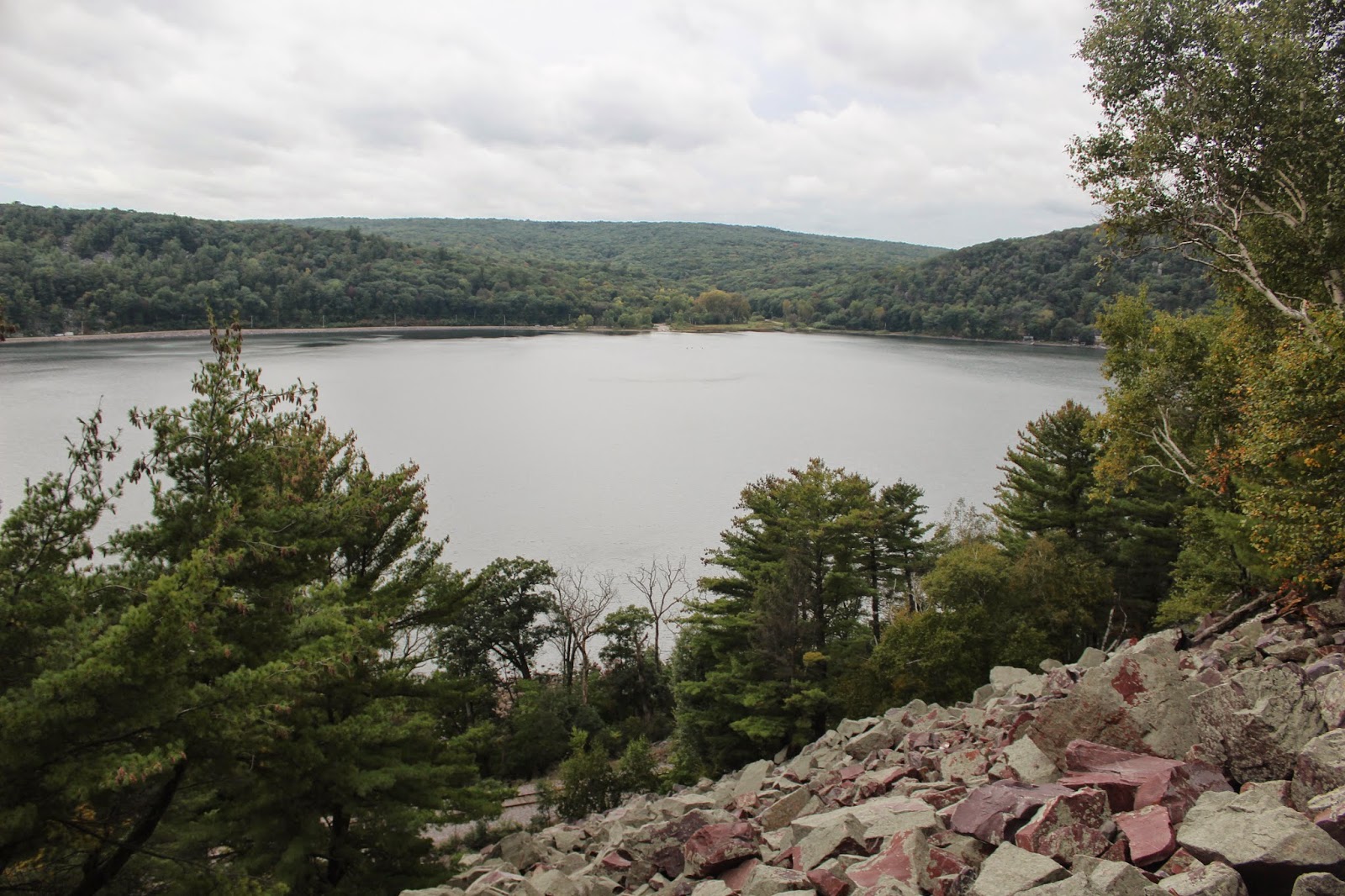 By now I was getting aggravated because of the rain.  I was so disappointed because I knew our carefully planned day was going to end shortly.  These are not the types of trails to safely do when it's raining.  In my frustration I missed the turnoff for Balanced Rock and ended up climbing too high.  Just by chance I happened to turn around and caught sight of Balanced Rock below us to the south.  Crap! 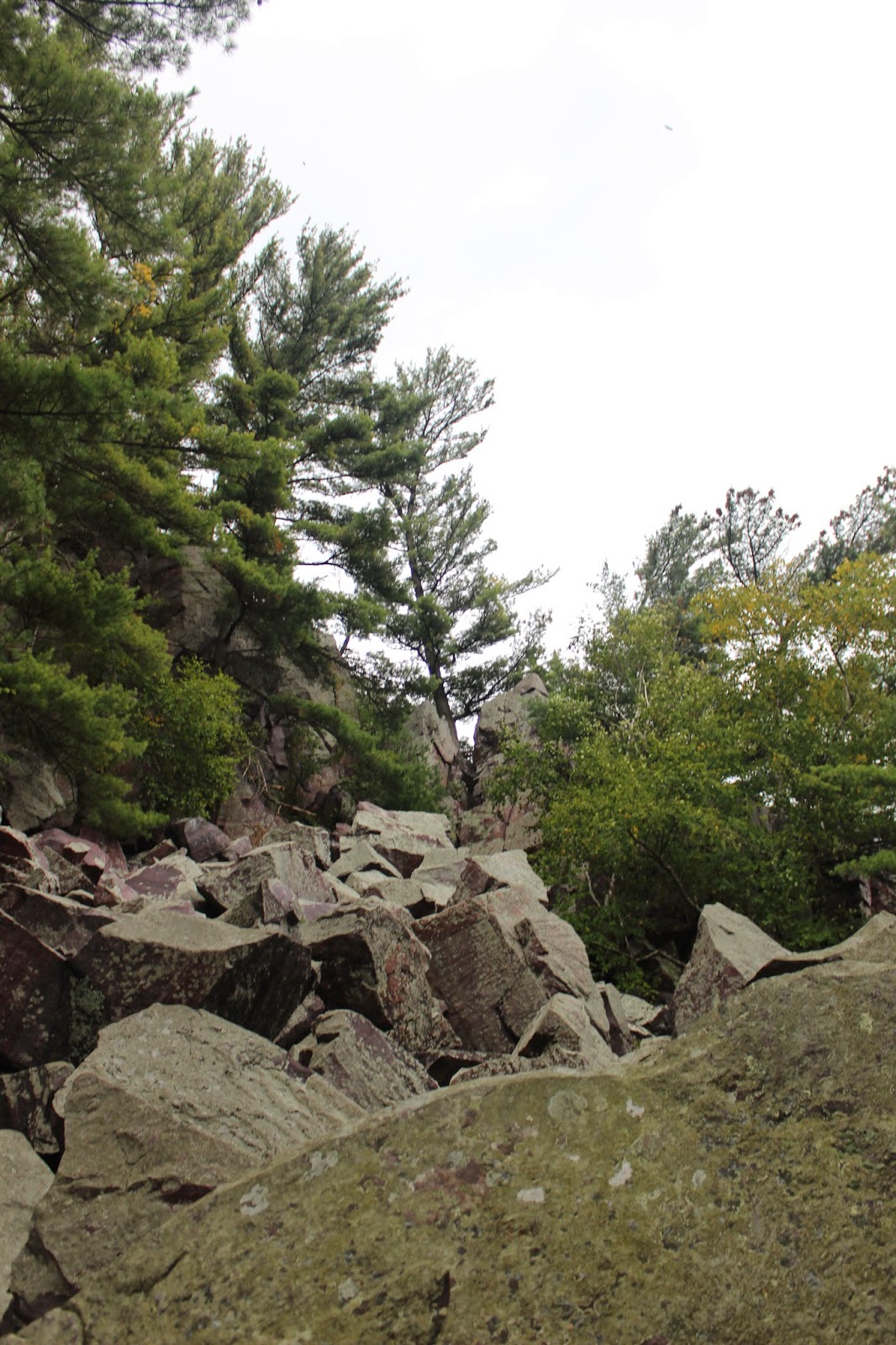 Chablis and I turned around and started climbing back down where I finally saw the sign I had missed earlier.  I was not a happy camper. 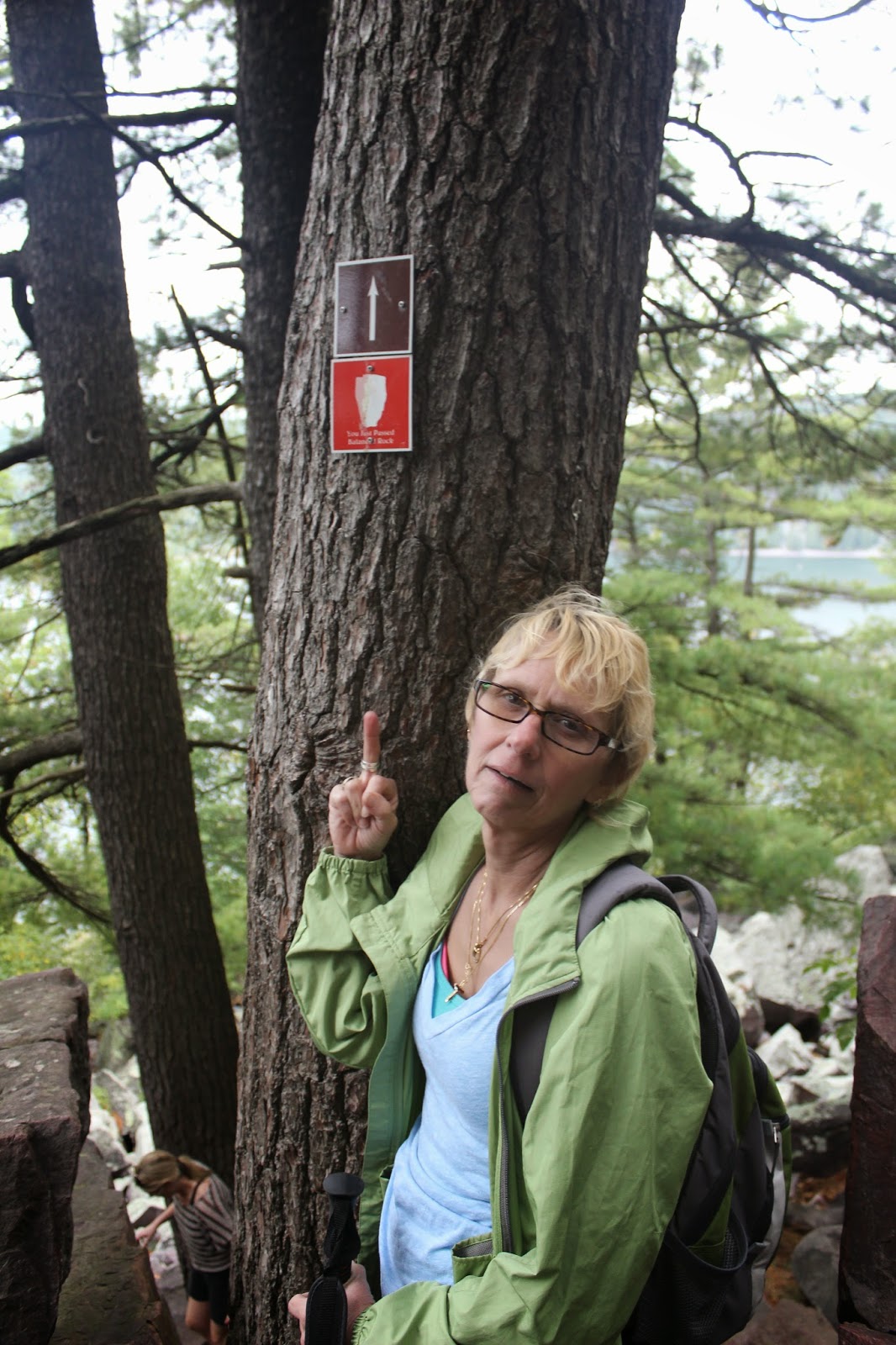 We scrambled over the rocks and finally reached our destination.   There were 5 people waiting to take a photo with the rock and by the time we took our shots, there were 30 people standing and waiting behind us.  There were people everywhere. 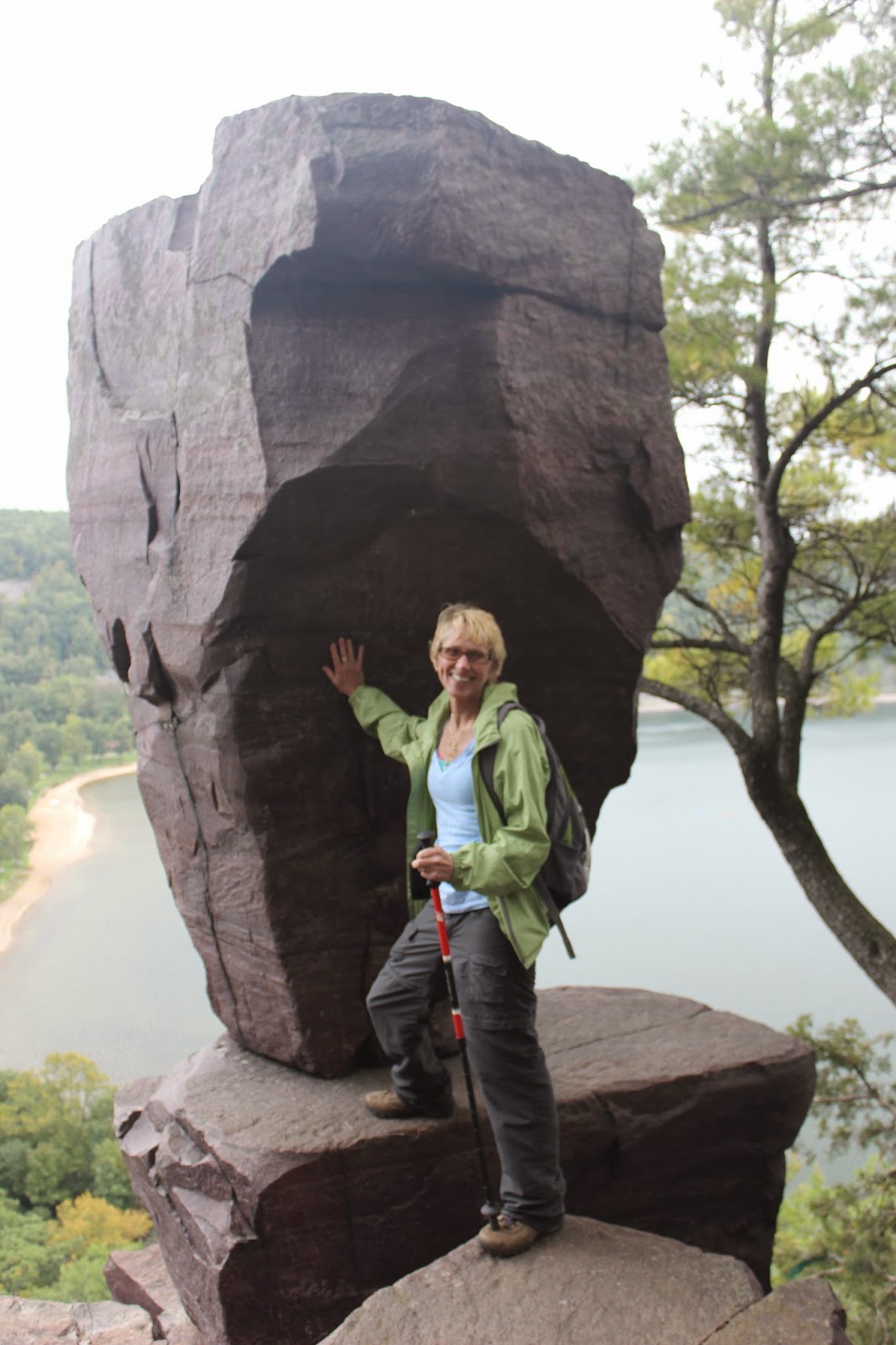 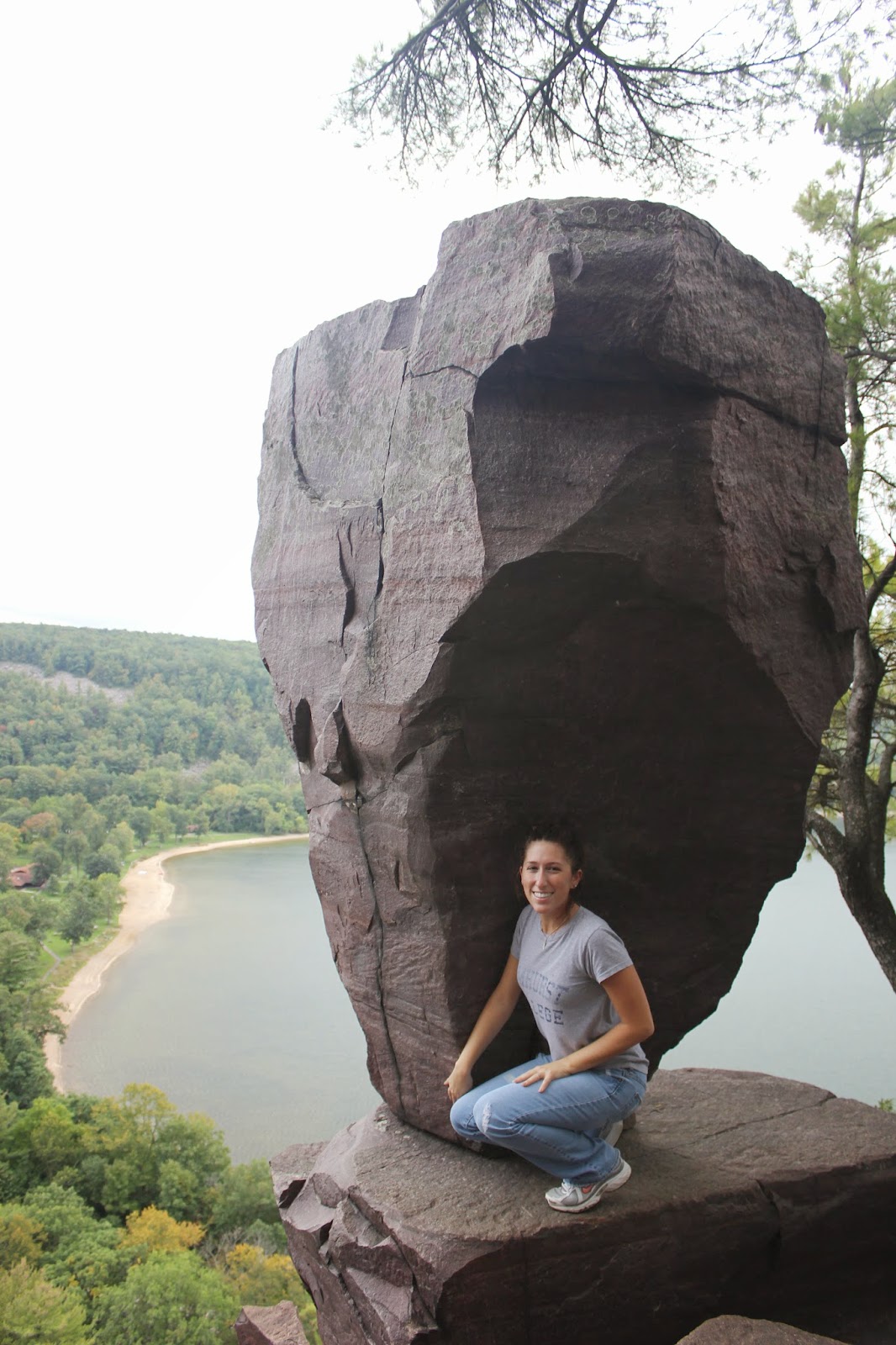 We took a couple more photos and then headed back down the trail to find Louie.  Unfortunately, by then the rain really started to come down.  We reluctantly decided to call it quits and once we got back to the car we headed out of the park, trying to decide on our plan B.

Plan B involved a late lunch at Pokey's Smoke on the Water where we had some great BBQ sandwiches with home made baked beans and got to watch some of the Wisconsin football game on a big screen TV.  Look at the adorable smoker they were using out in front.... 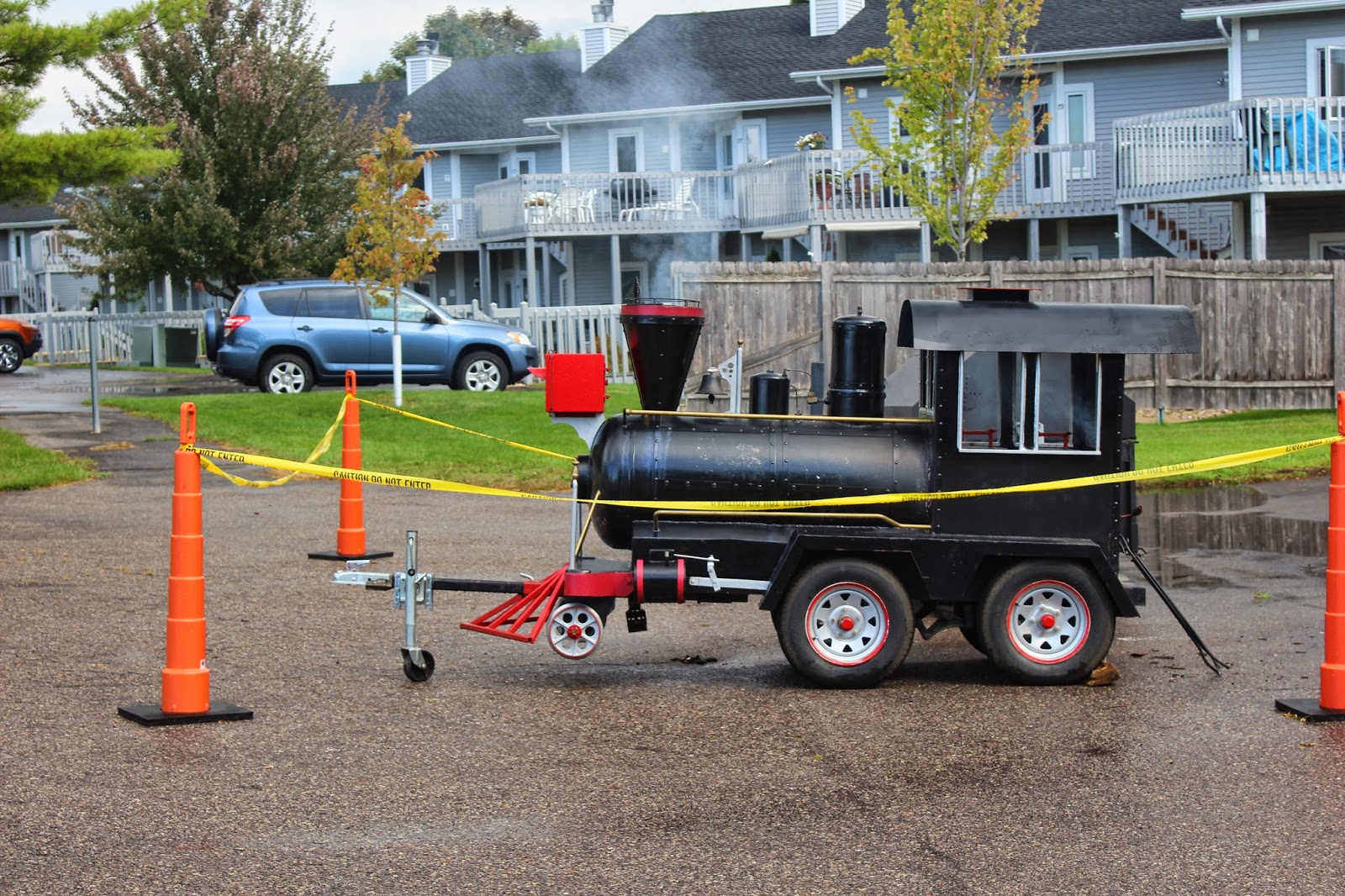 ﻿
﻿
﻿
﻿
Fortified, but still aggravated about the rain, we decided to swing around and take a look for a geocache we had heard about.  It had almost 200 favorite points, and we figured we could at least safely do this geocache in the rain, so off we went.  But more about that coming up next. 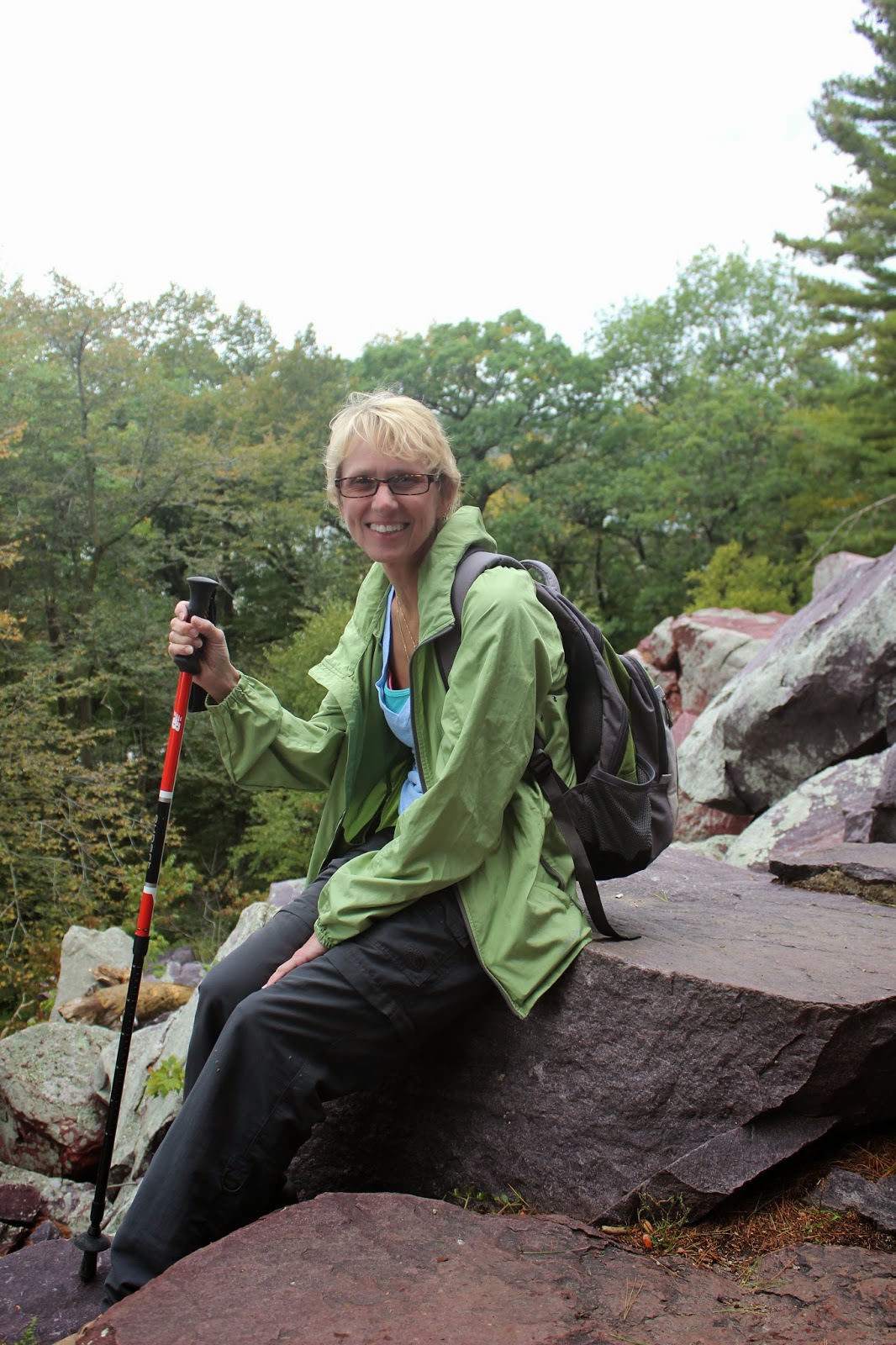 ﻿
In the meantime, I hope to get back up to Devil's Lake sometime soon and do some more hiking since we missed so much on the trip.  I just wish it wasn't so far of a drive because I'm determined to get back there and hike more of the trails and find those geocaches.
Posted by Kim@Snug Harbor at 12:00 AM