When I look for caches to do, I'm always looking for ones that have something interesting about them.  Either they have to be in an historical location, have an unusual cache container or there might be something fun to see or do at the cache location itself.

We recently did a couple of caches at the LBL (Land Between the Lakes) area in Kentucky.  The LBL is a National Recreation Area that extends between Kentucky and Tennessee.  Rich in history pertaining to the Civil War, the area was then controversial with the development of the Tennessee Valley Authority and the subsequent condemnation of land and removal of area farmers in order to impound the Tennessee and Cumberland Rivers so they could form Lake Barkley and Kentucky Lake.  The area then became known as the Land Between the Lakes and attractions were added such as the Nature Center, a buffalo range, The Homeplace farm, and hundreds of miles of hiking, biking, horseback riding and camping.  Today it's a beautiful area dedicated to many different types of outdoors activities.

One of the caches that I chose was LBL Cache.  I picked this cache along with 2 others because they were in an area of the LBL that we had never explored before, it was going to be a strenuous hike to get to all three of them and there was something cool to see at each location.

First up was this cache and when we left from the parking area there was a nice wide trail leading to the top of a hill.  We started up the trail but my GPS quickly pointed off to the right, so we found a narrow side trail and began following that.  Within 300 feet we were directed off trail and started some serious bush-wacking up a steep incline.  I feel bad that I don't have any pictures to show you of this part, but I was too busy trying to stay on my feet, not slide backwards down the hill and follow the GPS.  Grabbing my camera was not an option at this point.  Let's just say it was treacherous and Chablis actually broke her aluminum hiking pole in the process  - it snapped right in half.  Man down!

Here's some photo's of what we just climbed up.... 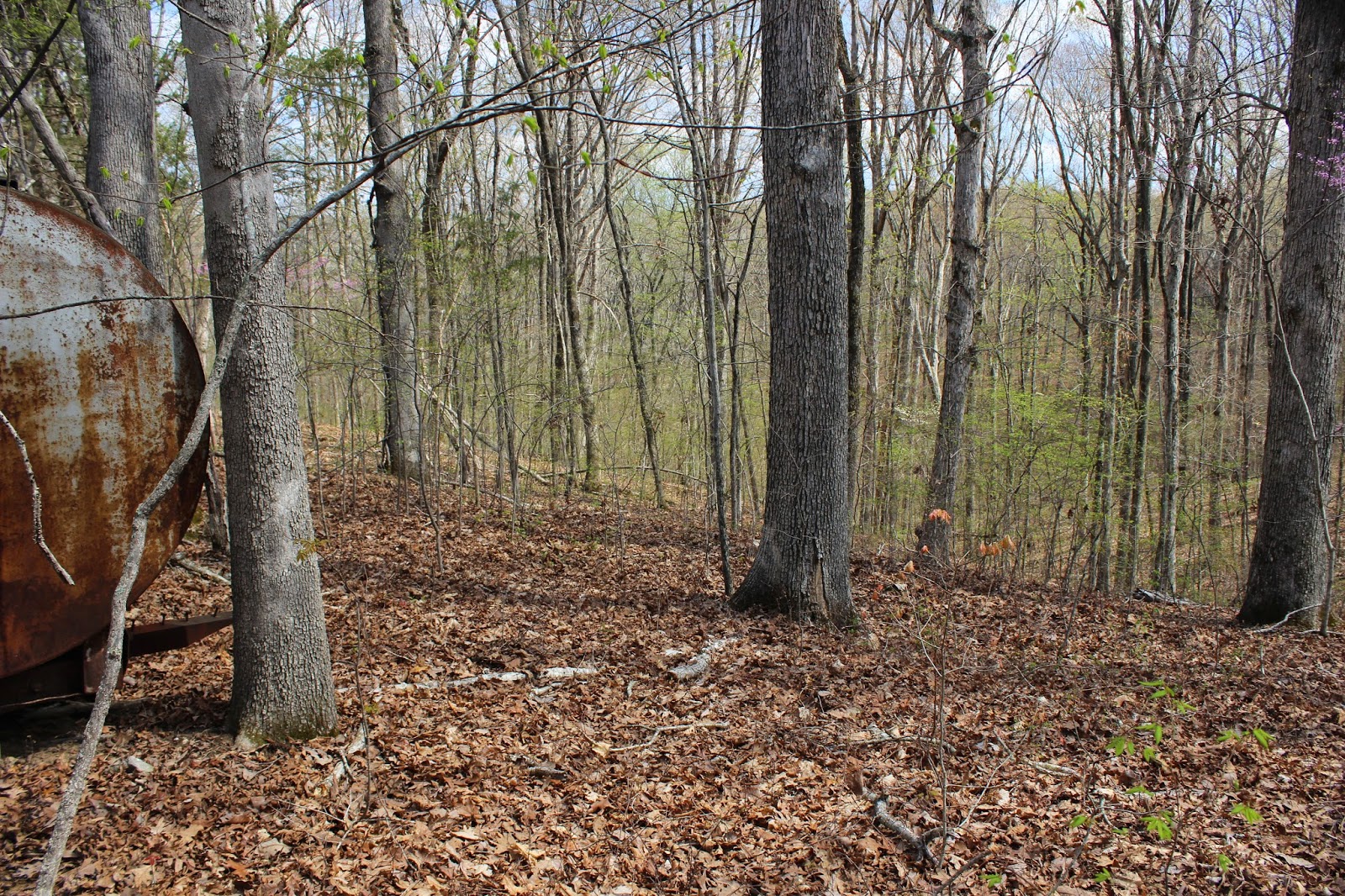 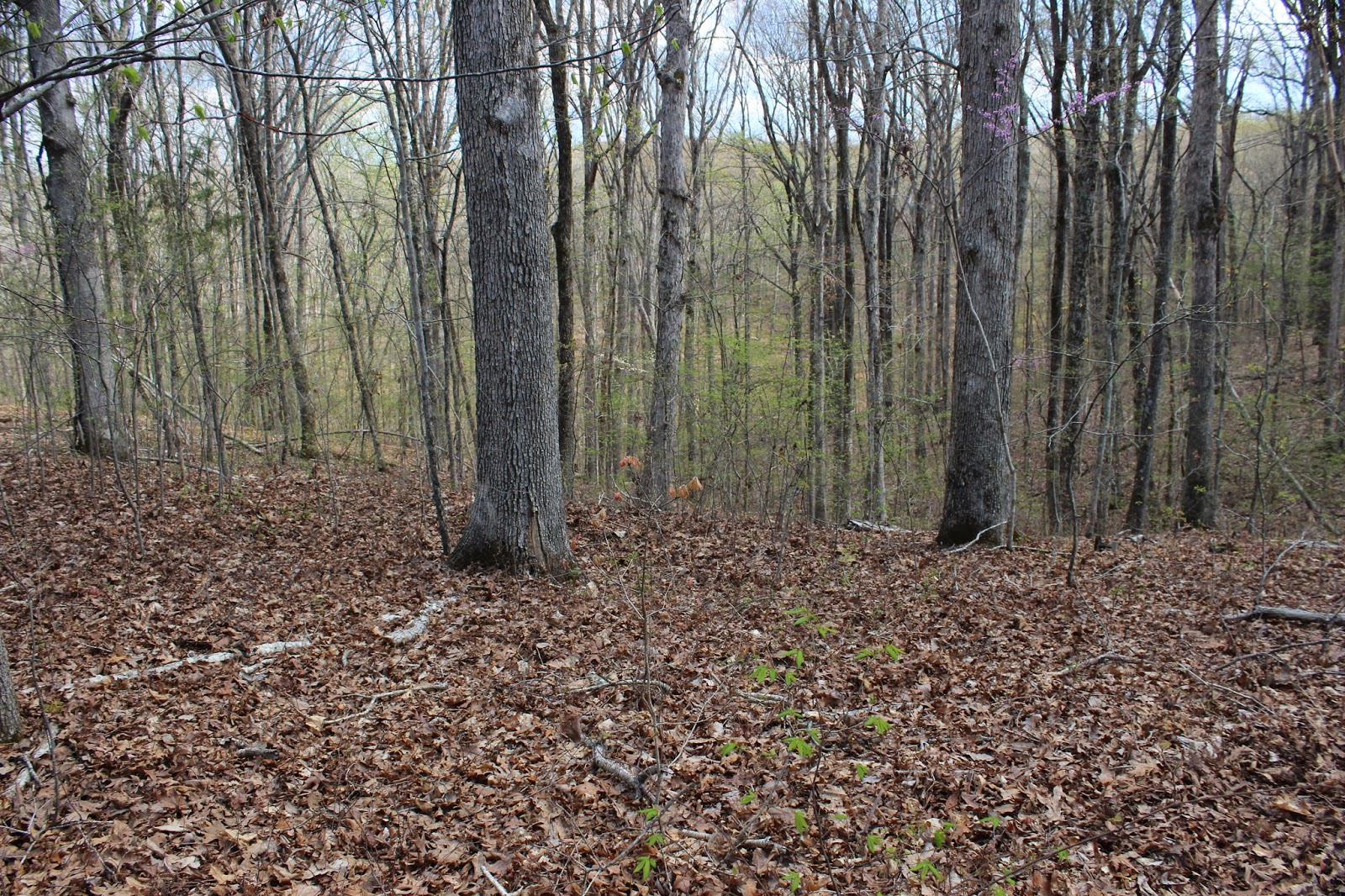 Once we scrambled to the top of the hill, we had a nice view of the lake and bay below us.  Since all the trees haven't leafed out yet, the view was pretty clear.... 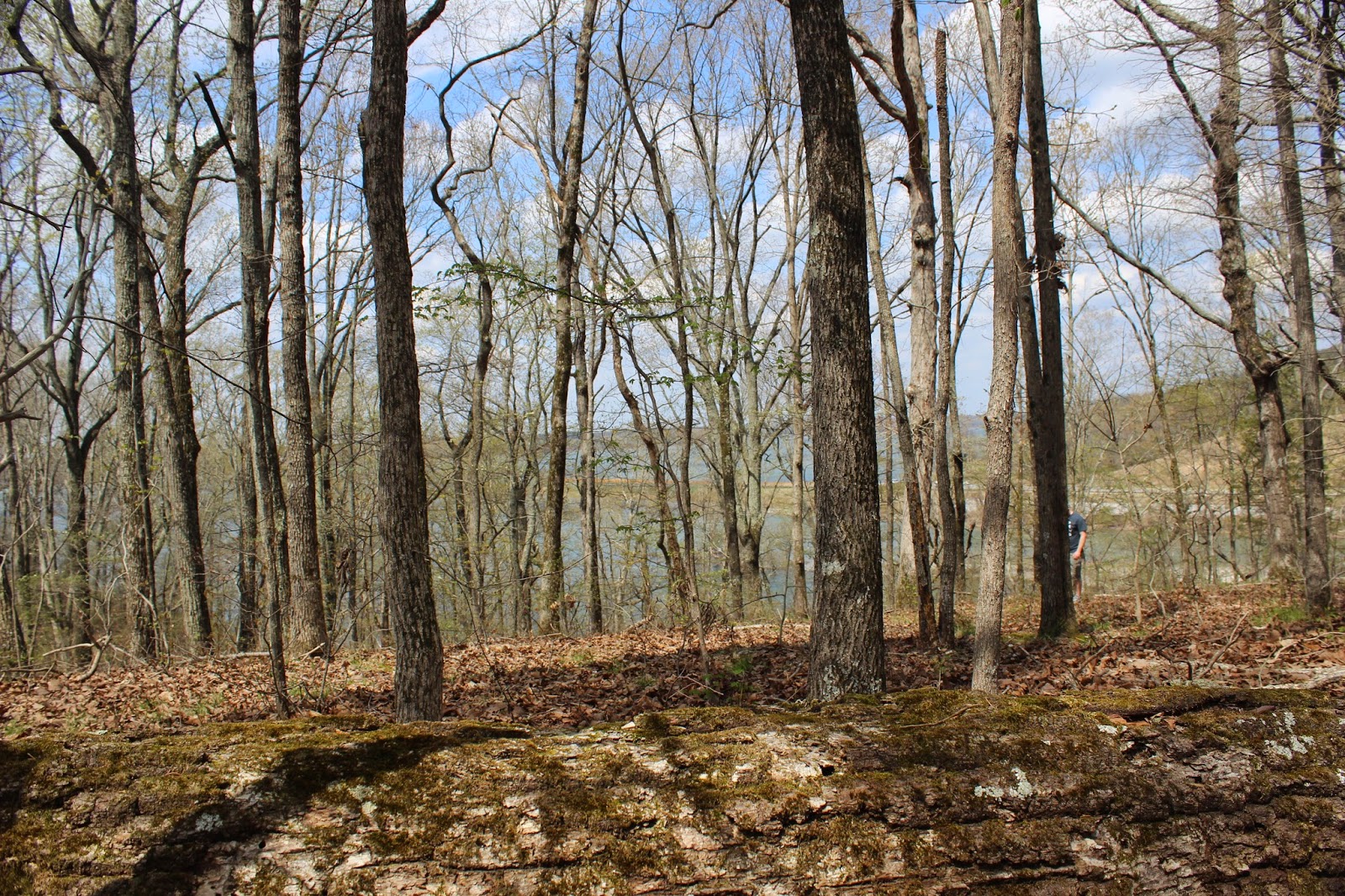 We looked around and quickly located the cache - I mean, first things first, right?  Then we turned our attention to this old, rusted tanker nearby.  It really makes one wonder how in the world an oil tanker came to be abandoned at the very top of an extremely steep hill.  We all took turns climbing around on it. 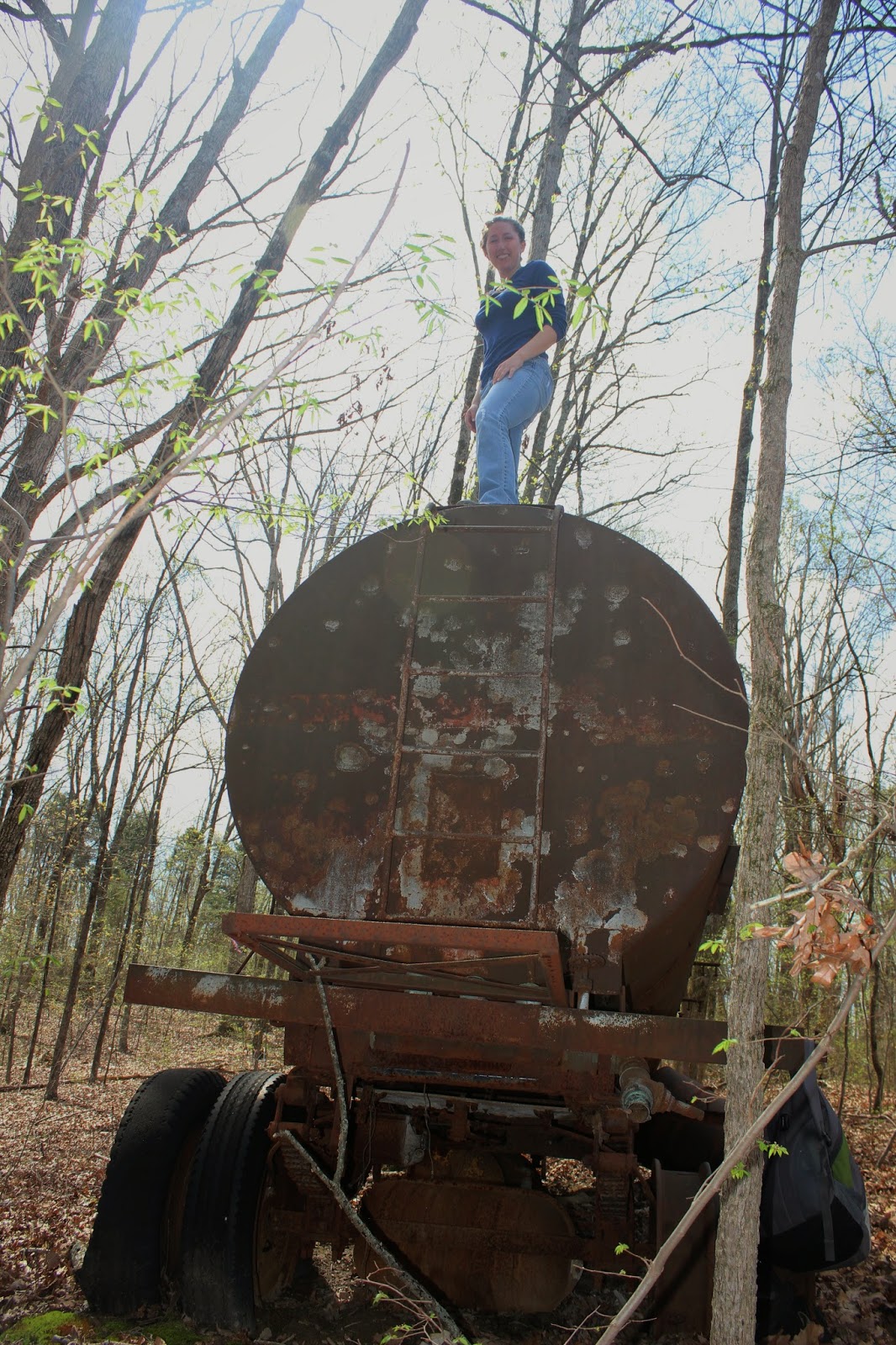 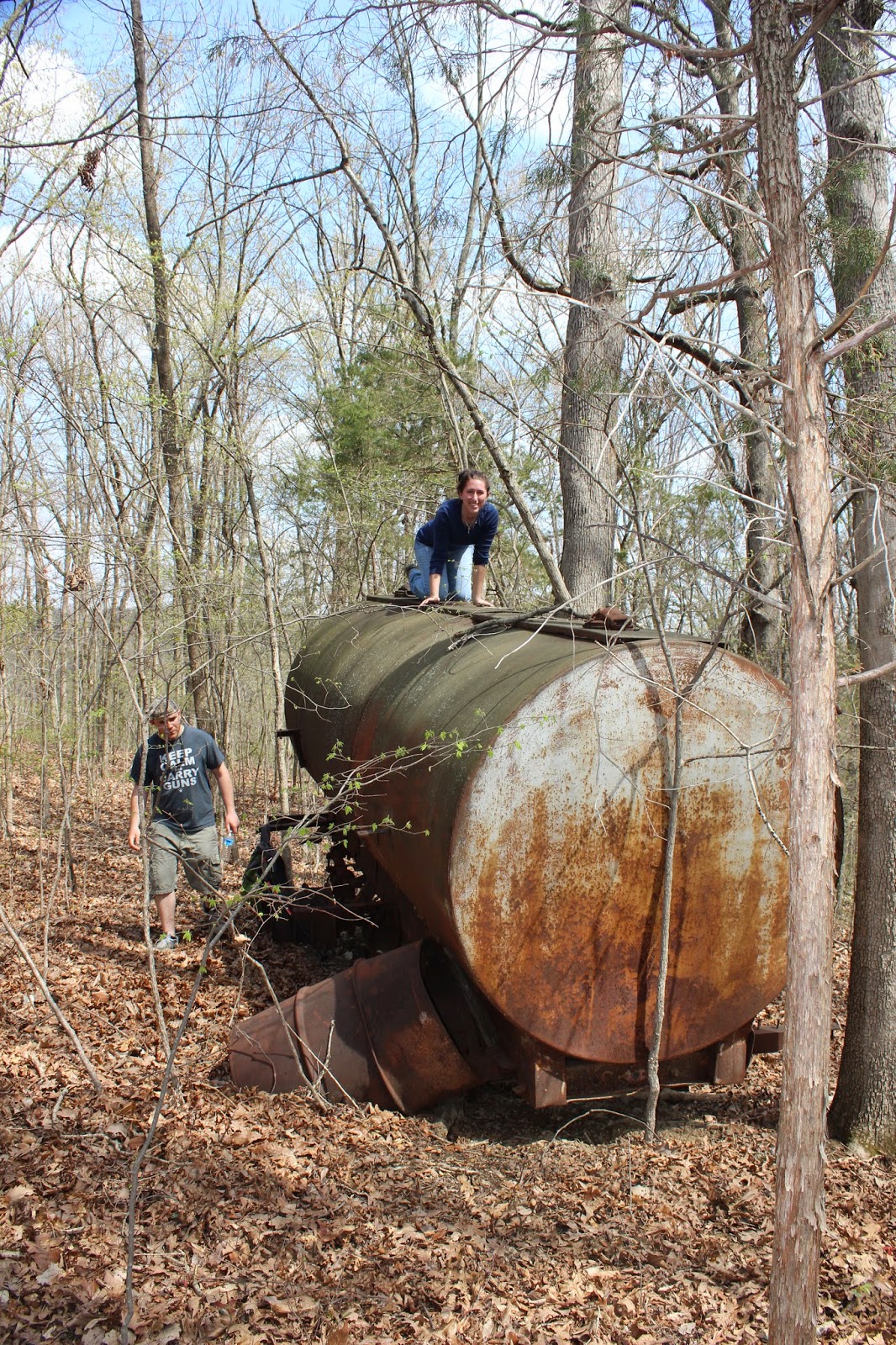 My GPS was bouncing around like crazy up there, so I sat on top of the tanker and waited for it to settle down so I could determine which way to head for the next geocache. 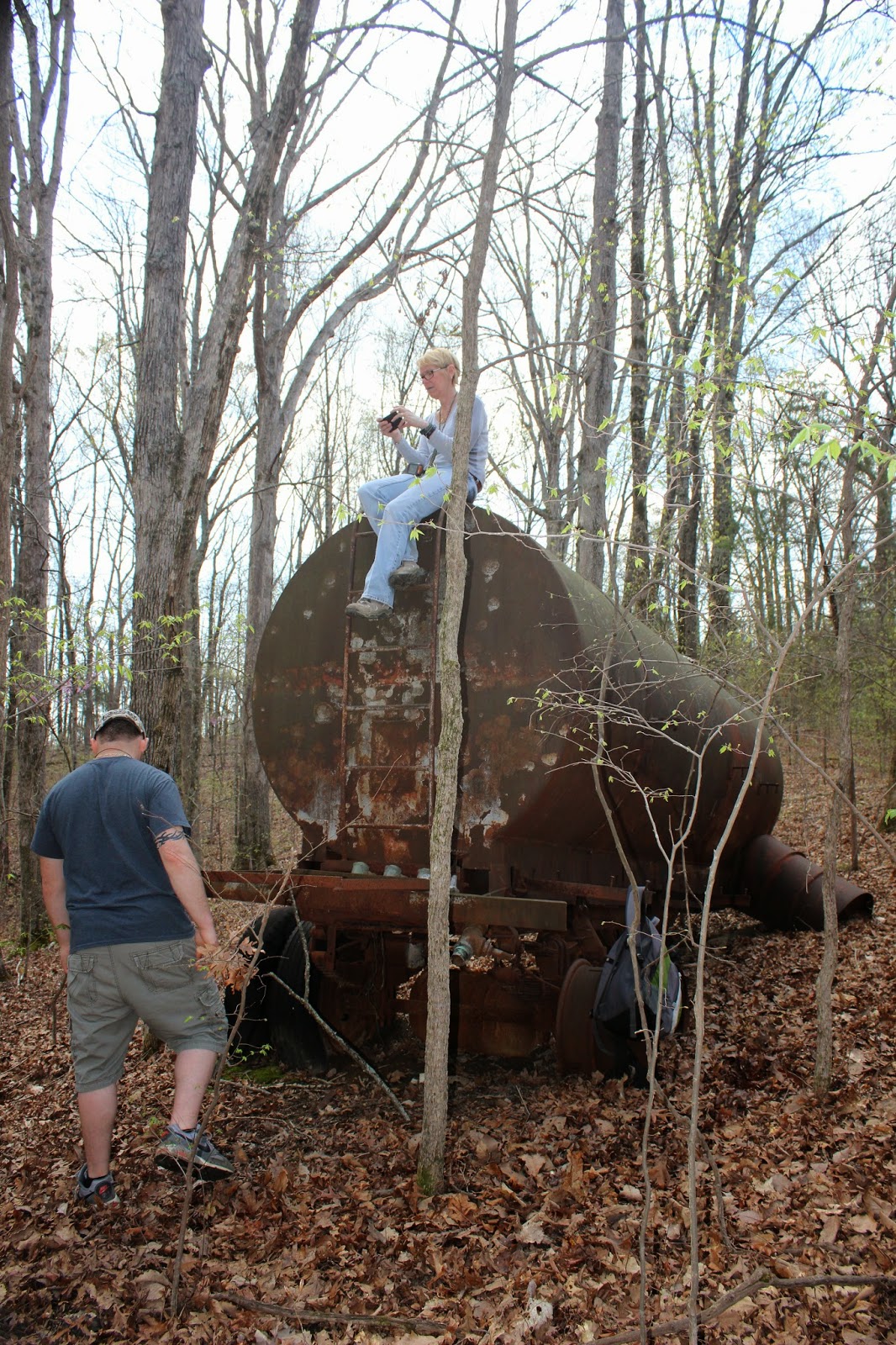 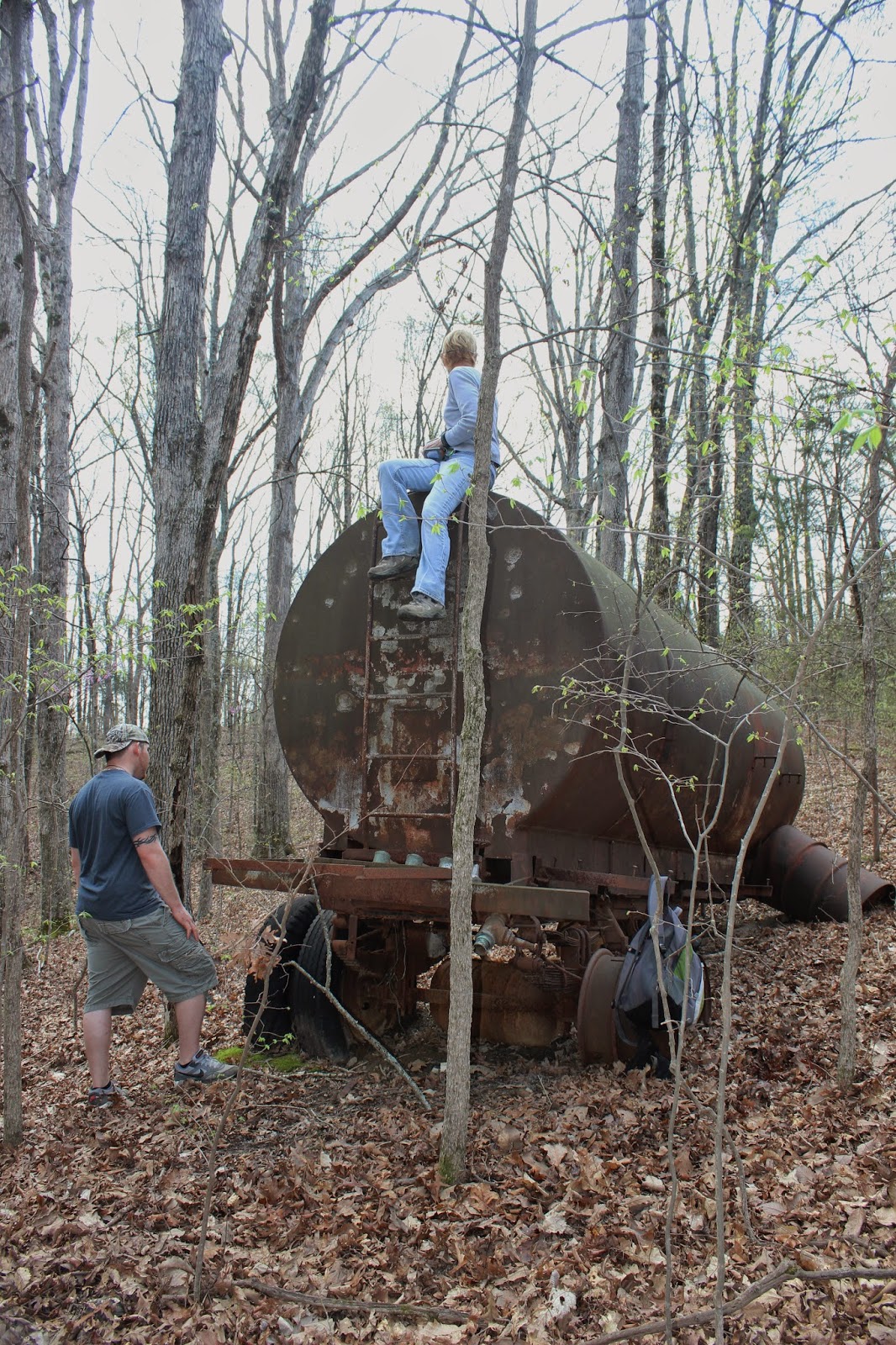 We gathered up all our stuff and headed west.  More to come.....
Land Between the Lakes is located in western Kentucky and Tennessee.  Check it out next time you're in the area.  There is plenty to see and do.