Please welcome my friend Heather, aka Lady Magpie.  She's a fellow blogger and geocacher over at The Ramblings of a Mad Pensioner.  She's been out of commission for a little bit and now she's ready to re-enter the blogging and geocaching world.... 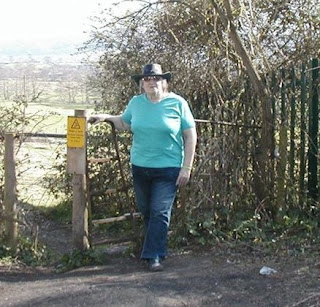 I know all you readers have been wondering what happen to that mad pensioner Lady Magpie, that used to write on this blog. Has she finally gone on to caches new or just faded away in the lost valley of Geocaching. Well I'm sorry to disappoint you, but I'm live and well and still kicking, although perhaps at a reduced rate.

It was way back in November 2012 and I had just completed an arduous 7 cache walk along a very a rugged green track, approx. 5 miles all together solo. Well who needs men to get the GPS wrong anyway.

The following morning I awoke in discomfort having discovered an abscess in a place that you really wouldn't want an abscess. A visit to the old doc followed, where he poked, prodded and generally made me more uncomfortable than when I arrive. It's incredible how all those years of training can give them the medical knowledge to utter the words "You've got an abscess", when in fact that's just what I said when I walked into his surgery. A prescription was issued and I hoped that was that.

Well by the time that abscess disappeared another had entered my world of ailments, thus curtailed my caching activities once again. Suddenly I discovered that I was having problems sitting on any chairs due to a serious pain that had started in my groin, and also an infection was starting right through my stomach, liver etc. By Christmas I had become very ill with nobody able to find what was wrong. Suddenly, on Boxing Day, I was rushed into Gloucester Royal Hospital by ambulance after being found by my brother in distress, Santa Claus had to wait this year.

I have hated this hospital since both my parents died here in the 90's and 00's. Not that I'm blaming our brilliant NHS (National Health Services), but the ward I was in was so understaffed it was ridicules, similar to when they were in there.

OK they were treating me with antibiotics, but within a few days they had kindly given my a serious bout of the Nora-virus. Now I don't know if any of you have had this, but for a few days it felt as if the world had dropped out of every orifice in my body, I will say no more. Due to this virus being so contagious our ward was shut down. We therefore had no visitors and even the nursing staff wouldn't come in, they just left what food they could by the ward doorway for us to pick up. I was not a happy Magpie, because I had no internet, no good television and was just lucky enough to get a slight signal on my mobile phone.

I was really fed up by now and all I wanted to do was get home again which I did after ten days. Yes they had stopped all the infections in my stomach, liver etc, but they had not found the reason why I felt I had on one of Tiger Woods' golf balls in my groin (Don't you dare say it must have been a hole in one).

The following year has been one of hospital visit, followed by more hospital visits, as they searched for the problem, I'm certain Mystic Meg would have solved my problems quicker.

Unfortunately I was also taking my my beloved Sister Mo to a cancer hospital every 4 weeks (chemotherapy) as she battled with the disease for a second year. Mind you, although the long journeys back and forth was teddious, I did sneak in a few geocaches in when I could. Her hospital was in the famous town of Cheltenham with many splendid Georgian Terraces, The picture below shows just what Cheltenham is all about and the cache I found was one of those little magnet nano's on the fencing.

My dear Sister Mo, who was my life, lost her battle and past away peacefully at home in October 2013. As you can imagine it was hard to actually get through each day let alone go out caching, but this did show one thing to me, my medical problems were nothing in comparison to what she had to go through.

By now the doctors have given up and decided what I needed was lots of medication. Now I'm sure the amount they have given me could kill all the buffalo on the prairies of North America. let alone ease my pain. I'm also sure that I now rattle as I walk around with the amount of pills I'm taking. This has caused me even more problems, well being such an old fart, I keep forgetting to take the flipping things. My Niece, Kernowboo, that's her caching name, came up with a fantastic idea. She has made me set up my mobile phone with an alarm that goes off every time I have to take some tablets. Very clever, but she didn't appreciate me asking if she could now ring me up to remind me to switch my phone on.

So where am I now in terms of geocaching after being limited to only 59 during 2013. I do plan to get back as much as I can, even if muggles can hear me rattles as I walk along. I have also started getting into photograph, combined with the caching, and have a few websites where my photos have been viewed. I leave you with a few of them and a reminder, look out THE MAGPIE IS BACK.


A few examples of what an old pensioner can do if found with a camera in hand, enjoy.

Email ThisBlogThis!Share to TwitterShare to FacebookShare to Pinterest
Labels: Heather, Lady Magpie, The Ramblings of a Mad Pensioner