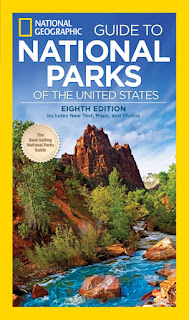 This 8th edition of the guide has been published to coincide with the 100th anniversary of the National Park Service.  It's been completely redesigned with updated information and maps.  Did you know that there are 59 National Parks?  Pull out your notebook and start making plans because once you open the book, you're going to want to visit a large majority of the parks.

The guide is broken down into 8 sections:

Each section is then further broken down by individual park, which each has a thorough description, a map, and pertinent information such as How to get there, When to go, Visitor Centers, Headquarters, Camping and Lodging.  Furthermore, the entire book features 80 full color maps and over 220 color photographs.   Let's take a look at some of my favorites...


One of the world’s great natural wonders, Mammoth Cave National Park sits beneath Kentucky hills and hollows. It earned its grandiose designation in the early 19th century, when tourists marveled at the enormity of its underground chambers. With more than 400 miles of mapped passageways, Mammoth Cave National Park encompasses the planet’s longest known cave system, with five levels and caves yet to be discovered..... 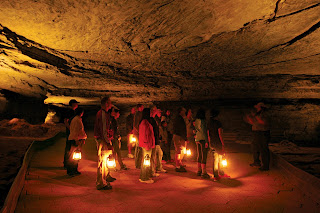 
Like the Statue of Liberty, the Grand Canyon is an American icon. (It’s almost as if the majesty of the American West has been poured into a limestone riverbed.) Theodore Roosevelt considered it his civic duty to urge every American to see it. And around five million people come to Grand Canyon National Park every year, from all over the globe. Indeed, the canyon is considered one of the seven wonders of the natural world.... 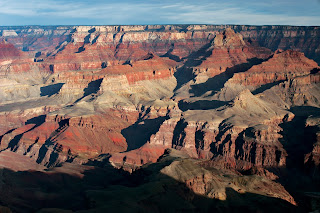 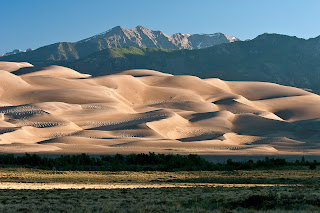 Death Valley
California & Nevada Established October 31, 1994 3.4 million acres
Badwater Basin
Hottest, driest, lowest, largest . . . Death Valley dazzles, even intimidates, with superlatives. The largest national park in the Lower 48 has indeed recorded the world’s highest temperature (134° F), nets less than two inches of rain a year, and contains the lowest spot in North America. But those extremes can add up to fascination. Death Valley National Park is nothing short of spellbinding.... 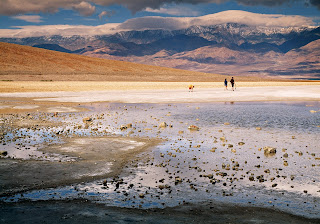 Pinnacles
California Established January 10, 2013 27,214 acres
The park’s namesakes are the eroded leftovers of an extinct volcano.
Pinnacles—America’s newest national park—is a geologic playground, a rumpled volcanic landscape of protruding lava spires, massive rocky bastions, and crenellated cliffs interlaced with dense, woody chaparral and woodlands of oak and pine. Located in west central California, in the Gabilan Range (part of the Coast Range), Pinnacles National Park offers 32 miles of hiking trails and an impressive roster of fauna (there are more than 500 species of moths in the park alone).... 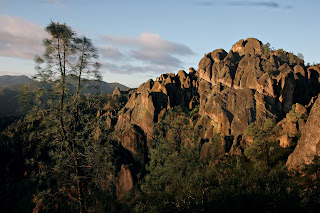 Sequoia & Kings Canyon
California Sequoia Established September 25, 1890 Kings Canyon Established March 4, 1940 865,964 acres (total)
Horses work the trail.
The largest tree on earth (by volume). The highest mountain in the contiguous United States. One of the deepest canyons in North America. Some of the most remote wilderness in the Lower 48. It’s all about grand scale in Sequoia & Kings Canyon National Parks—and yet these adjoining and jointly administered parks also offer a multitude of intimate natural treasures and experiences, in the backcountry as well as closer to the heart of things.... 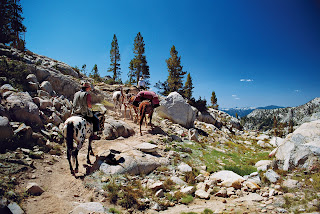 Crater Lake
Oregon Established May 22, 1902 183,224 acres
Snowmelt feeds Crater Lake.
More than 5 trillion gallons of water fill the crater— what remains of Mount Mazama. With a surface area of 21 square miles and depth of 1,943 feet, Crater Lake is the deepest lake in the United States. In addition the size of Crater Lake National Park, it is the stunning sapphire water that etches itself in memory... 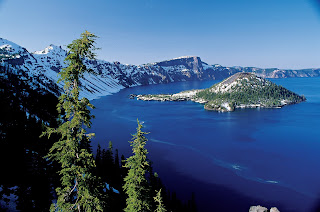 One of the things I liked best about this guidebook is the size - with dimensions of 5.3 x .8 x 8.4 inches and 496 pages it's perfect for carrying in the car, a suitcase or a backpack.  As I read through the book I found myself making lots of notes of the places I'm adding to my bucket list.  Somebody give me a camper - I want to leave now!

(I was given an advance copy of this book in exchange for an honest review.  All opinions are my own.  Images are the property of the publisher and cannot be reproduced without consent.)