About a month ago we took a road trip with my parents to the Quad City area, which straddles the Illinois/Iowa border.  We had a list of geocaches in hand that we wanted to tackle - a great series put out by geocacher DTCBears called The Quad City Museum Geocache Series.

The series consists of 11 geocaches with a 12th bonus cache and each is placed near a museum or a historic location - you know how much I love to combine history with geocaching!

Let me show you some of the geocache locations.  The first one we did was called A Chip off the Old Buffalo.  This one was located at the Buffalo Bill Museum.  We've been to this museum before and it's a great place.  If you're a fan of Buffalo Bill, you will want to visit here and leave plenty of time to walk thru. 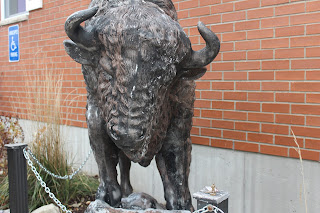 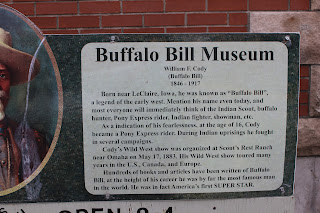 The geocache was strategically placed.  You can actually see the clever container in this photo, but I'm not giving out any secrets.... 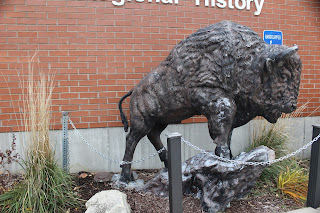 Where the Buffalo Roam  is another "must see" location because it's the family homestead of Buffalo Bill, complete with buffalo and the original house. Can you see the buffalo in the background? 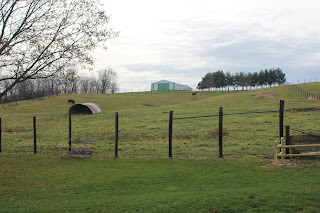 I wish the house would have been open because I would have loved to walk around inside.... 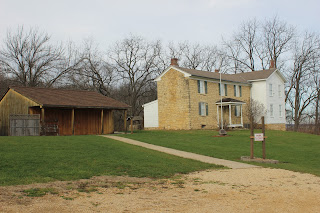 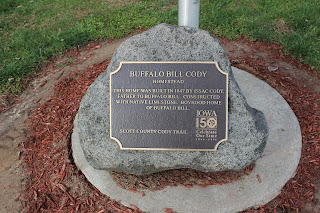 We saw deer off the back porch.... 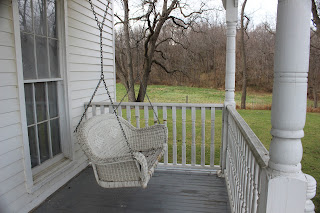 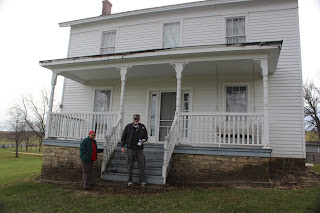 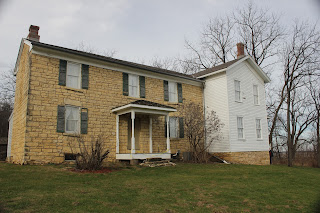 Put the Hammer Down in Our Town is a cool little historic village.  From the cache page....  The Dan Nagel Walnut Grove Pioneer Village is an Open Air Museum, with 19 historical Scott County buildings depicting a rural Iowa community from 1850-1950, including an 1870's church, one-room school, two log cabins, blacksmith shop and house, saloon, soda fountain, general store, and more! 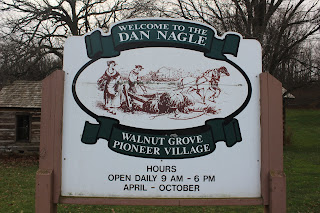 The village was closed  up tight when we got there, so we kind of sneaked in.  As we were squeezing thru the fence a guy pulled up in a pick up truck and asked what we were doing.  We yelled "Geocaching" and he laughed, told us to have a good time, and waved as he pulled away. 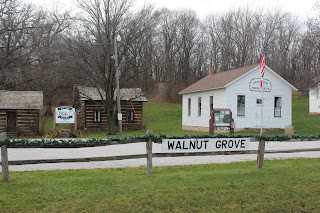 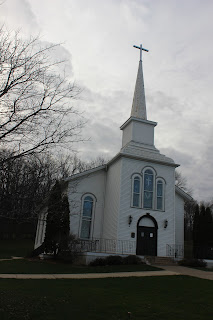 Once we found the geocache we hurried through the town just to look at everything.... 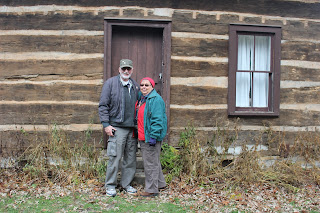 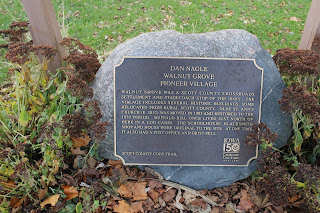 Book Immooile #1    was another favorite - I always like finding these clever lending libraries.  Be sure to bring a book to leave. 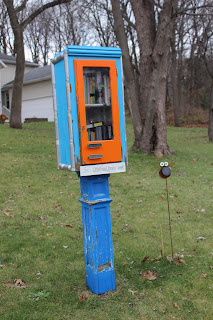 The photo of the Iowa 80 Trucking Museum is also the location of the The Mighty Rigs of Yesteryear  and that trucking museum is absolutely phenomenal!  They are adding another half-again as long/big building addition on the rear of the current structure (that is already a monster!) to add tons of additional trucks and historical items! 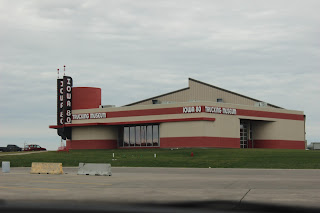 In Plain View  is hidden near The World's Largest Truck Stop.  Now that is something you're not gonna see everyday.   From their website:  Today, after 28 expansions and remodels, Iowa 80 is overseen by the second generation of the Moon Family, and includes the Iowa 80 Kitchen, a 300-seat restaurant; gift store, the Super Truck Showroom, a dentist, a barber shop, a chiropractor, a workout room, laundry facilities, a 60-seat movie theatre, a trucker’s TV lounge, a Verizon store kiosk, 24 private showers, a Food Court featuring Wendy’s, Dairy Queen, Orange Julius, Taco Bell, Pizza Hut and Caribou Coffee; a convenience store, a custom embroidery and vinyl shop, 10 gas islands, 16 diesel lanes, a fuel center, a 7-bay truck service center, a 3-bay Truckomat truck wash, a CAT Scale, a Dogomat Pet Wash, and the Iowa 80 Trucking Museum.    This one cache was not part of the QC Museum series, but it's so close to The Mighty Rigs cache that you have to stop and grab it.  Go inside and check out the truck stop - it is HUGE! 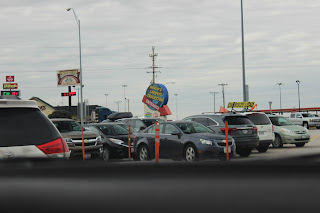 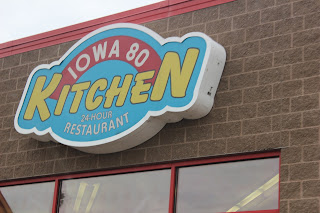 The next cache Kids Play Here   was hidden outside a children's museum.  It was obviously a very popular place judging by the steady stream of people in and out as we searched for the geocache.  Nobody gave us a second glance while we looked high and low near this bridge. 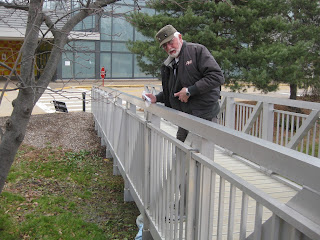 Has Anyone Seen My Mummy   is at the Putman Building.  This place sounds pretty interesting and I bet kids of all ages would have a ball here:  The Putnam has been inspiring ideas, dialogue and interaction among people of all ages for nearly 150 years! And today, we’re better than ever with hands-on fun for the whole family! Launch rockets or interact with a robot in our Science Center, visit our famous mummies in Unearthing Ancient Egypt, climb into a treehouse in Black Earth | Big River or go back in time to see our region’s history in River, Prairie, and People. 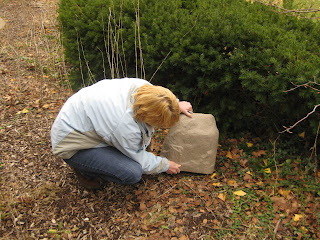 Wilkommen to Where the Family Trees Grow  is a beautiful old building.  Visit the cache page to read the history on this one.  It was starting to get late in the day and we had to hurry along so we could find the rest of the geocaches before it got dark.  I would have liked to explore this location a little further. 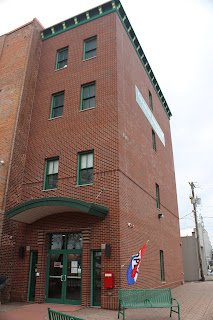 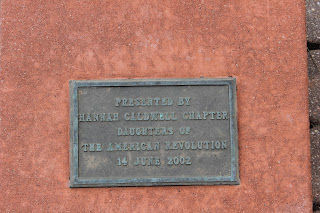 Deere's Heir  is hidden at the house that John Deere's son built for his wife in 1871 and it housed 4 generations of Deere descendants.   I saw a red fox running across the property as we searched for the cache. 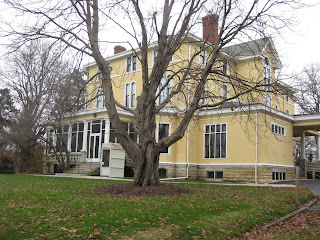 I think my favorite cache of the day was We're Going to Need a Bigger Bottle of Windex.  Great cache name and it makes perfect sense once you look at the building, don't you agree?

One of the best aspects of geocaching, besides the places it takes you, is the people you meet and the stories you can tell.  Finding this cache comes with a great story:

We arrived at GZ (ground zero) and started looking around. Nothing. We walked all the way around the building... still nothing. Went back to original GZ and kept looking. Read past logs on the cache page.... still nothing. My husband walked inside and asked the girl at the gift counter if she knew about the geocache. She said, " yes - it's outside."  We walked all over the place outside and searched again. Still nothing. Went back inside and asked Laura if she could come give us a hint. She walked outside and said "Hmmmm.... The host is gone! It was here yesterday."
She went inside and called security who confirmed that the cache host had been put into storage for the winter. The security guard kindly brought the log sheet and clue up for us to sign. Big sigh of relief all around since we drove all the way from Chicago specifically to do this series and if we didn't get this cache, we were sunk.Laura - adorable girl at the desk with the green hair, now has the log book and she said cachers should come see her until the CO decides what to do about the missing host.  See, I told you that was a great story!


As we found each geocache and signed our names, we also had to write down a numeric clue that was written in each logbook.  These numbers would be used later to find a Bonus Cache.  Another fun feature was getting to grab a commemorative souvenir token from each cache. 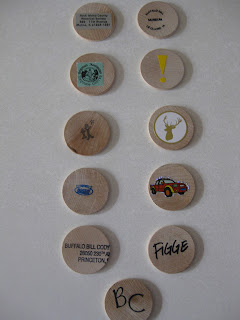 Once we found the 11 main geocaches we had to go to the QC Museum Bonus Cache page and use the aforementioned numbers to solve a puzzle.  Puzzle caches are not our strong suit so we were thrilled that we calculated correctly the first time and we quickly found the bonus geocache.  Woo hoo!  And none too soon as the sun was setting.

I'm a big fan of a geocache series that takes us around to historic locations and this was one fun series.  The Quad Cities area really puts their best foot forward with a wonderful selection of attractions, history and museums.   You can easily spend 2 days in this area checking out all the fun things to see and do.  Next post coming up is an interview with the geocacher who placed the series -  DTCBears.  Be sure to come back for that!