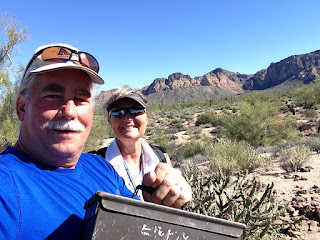 On Wednesday I did a post on a fantastic geocache series called The Quad City Museum Geocache Series that was put out by geocacher DTCBears, aka Dave.  If you missed the post, please go back and read it here.  I invited Dave over for an interview so we could hear about the hard work and dedication involved in putting out a geocache series, and to share some geocaching stories with us as well.


The Quad City Museum Series consists of 11 geocaches and then a final puzzle cache.  Who came up with the idea for the series?

A lot of people aren’t familiar with the term “Quad Cities.”  Please explain what the Quad Cities are.

The Quad Cities is a region of four counties in northwest Illinois and Southeastern Iowa, where the Mississippi River separates Iowa and Illinois,  that includes numerous cities and their adjacent smaller towns. The urban core consists of four principal cities (thus the term ‘Quad’): Davenport and Bettendorf in Iowa, and Rock Island, Moline in Illinois.   Many in the area include a 5th city, East Moline in Illinois, as part of the Quad Cities.  Some used the name ‘Quint Cities’ when including East Moline.   See more here: www.visitquadcities.com

This was a huge undertaking considering that you had to scope out cache locations, put the geocache containers together, place the caches, make all the wooden tokens and then write up all the cache descriptions.  Did you work on everything yourself or did you have some help?

I worked with Gretchen Small to grasp and document her concept of wanting a geocache placed at each participating Q.C. Museum as one part of her Quad Cities Museum Week project, along with a ‘bonus’ cache if geocachers visited all of the sites.  She gathered a list of the key personnel at each museum, and I took it from there…  scheduling meetings with those individuals on site at their locations,  explaining the project and geocaching, and doing walk-arounds to select good placement locations for the caches.  We emailed and phoned each other as questions came up that needed answers.

Once I reported back with the details, Gretchen then ordered the cache containers, the wooden coins and pencils, and had a worker at the Butterworth Center create and assemble log books. After receiving the containers, it was just myself and great help from my wife, Joyce (geo-ID: MathMate), who took it all from that point, planning, painting the caches, creating a few unique and really fun ‘outer’ containers, placing and securely tethering the containers, filling each with coins/logs/pencils, locking in the coordinates, creating the cache pages, working with each site admin. person when I placed the geocaches, and working with the geocaching admin to get them published all on the same day.

Two other caches were ‘in the way’ of placing two of the museum caches, so I contacted the two affected cache owners who were nice enough to let me adopt/move their caches to make room for the museum caches…  which added several additional days to the project.  Gretchen repeatedly mentioned how lucky she was to have me ‘running with the project’ because of her required involvement with the rest of the larger Q.C. Museum Week project.

The cache descriptions are extremely interesting and informative.  Where did you gather all your facts and history?

From each museum’s internet web site, and other ‘on site’ informational brochures.

Do you have any tips or advice for anyone who is interested in doing something similar to highlight their town and open it to the caching community?

Get started early.   What I thought might take a few days/weeks ended up being a couple of months all together.  Get organized and plan well, documenting all of the tasks you need to do.  Then be positive and friendly, informative, and engaging when contacting and meeting with the administrative personnel at each site location to get the proper approvals, and to make them feel it is ‘their’ project/geocache.  Ask them what they would like to see in a geocache, show them examples, get information and photos from them, give them a copy of the completed cache page for approval, and let them know when the caches ‘go live’ and to watch the fun as ‘searchers’ start their hunts.  If you are creative, put together some fun geocaches that involve the place of business or specific area…  like building a birdhouse or a large fake birds nest for a bird seed store, a ‘car part’ cache for an auto parts store, ‘critter’ caches for wildlife area, etc.

How long have you lived in the Quad city area?

Did you have any problems getting permission to place the caches at their locations?

Not at all!  Quite the opposite! Because the locations were all museums, they were very receptive to implementing anything ‘family fun’ that was related to their museum and would bring attention to, and bring potential visitors to, these spots.

Of all the caches that you’ve placed, which is your favorite location and why?

Excluding the Q.C. Museum series, we have caches in 30 or more of the Davenport Iowa Parks, and have implemented several series(s) including a sports ‘Balls’ series, an ‘Up the Creek’ series, and a bike ‘Path’ series.  But I guess one of the most challenging and fun caches we placed was the NIGHT CACHE that MathMate and I installed at the Black Hawk Forest at the Black Hawk State Historic Site in Rock Island Illinois.  We placed over 350 trail tacks throughout the trails of this wonderful forest to ‘light the way’ for geocachers to the final cache! We have also ‘walked the forest’ a couple of times each year since the original placement to refresh any missing tacks while watching the deer, squirrels, birds, raccoons, and other wildlife each time we hike there.  See: GC4NYVJ

How long have you been geocaching?

Just had my 4 year anniversary…  since January of 2012.  In that time, I have found over 8,800 geocaches, and have placed and/or maintain 280 geocaches in the Quad Cities area.

What is your caching name and why did you choose it?

DTCBears is a combination of my initials: DTC, and two of my lifelong favorites: The Chicago Bears NFL team, and of course the outdoors/wildlife.  The addition of the word ‘Bears’ worked for both of those.

What is the best cache you’ve ever done that is not one of your own?

In addition to many challenging 5x5 caches, hikes to caches in the mountains and desert backcountry, and a bunch of really fun ‘cschooner’ caches in Scottsdale, AZ, I guess my favorite ‘best cache’ to-date was: 49 AND HOLDING THE CACHE A GOLD MINER'S DELIGHT in Pella, Iowa.  See: GC202RG  At this writing, it has 423 favorite points!  No sneak preview from me.  It’s awesome. Go see it!

Well, I've added 49 AND HOLDING THE CACHE A GOLD MINER'S DELIGHT  to my list of must-do caches!  I'd like to thank Dave for taking the time to stop by for an interview and on behalf of the geocaching community, thank you (and Gretchen) for conceptualizing and placing this great series of geocaches.  You've found an innovative way to introduce the geocaching community to your wonderful area.