This week was a little slow for estate sales and that was so disappointing after last weeks bonanza.  But I managed to pick up a few things.  One sale was crammed with Peanuts memorabilia.  There was so much stuff that even I was overwhelmed.  I picked up the 2 blue tins for myself to keep crating items in.  The square tin on the right will be turned into a refrigerator magnet for holding pens and pencils.  Chablis picked up the Barnes and Nobel mint tin and the jar of buttons.... 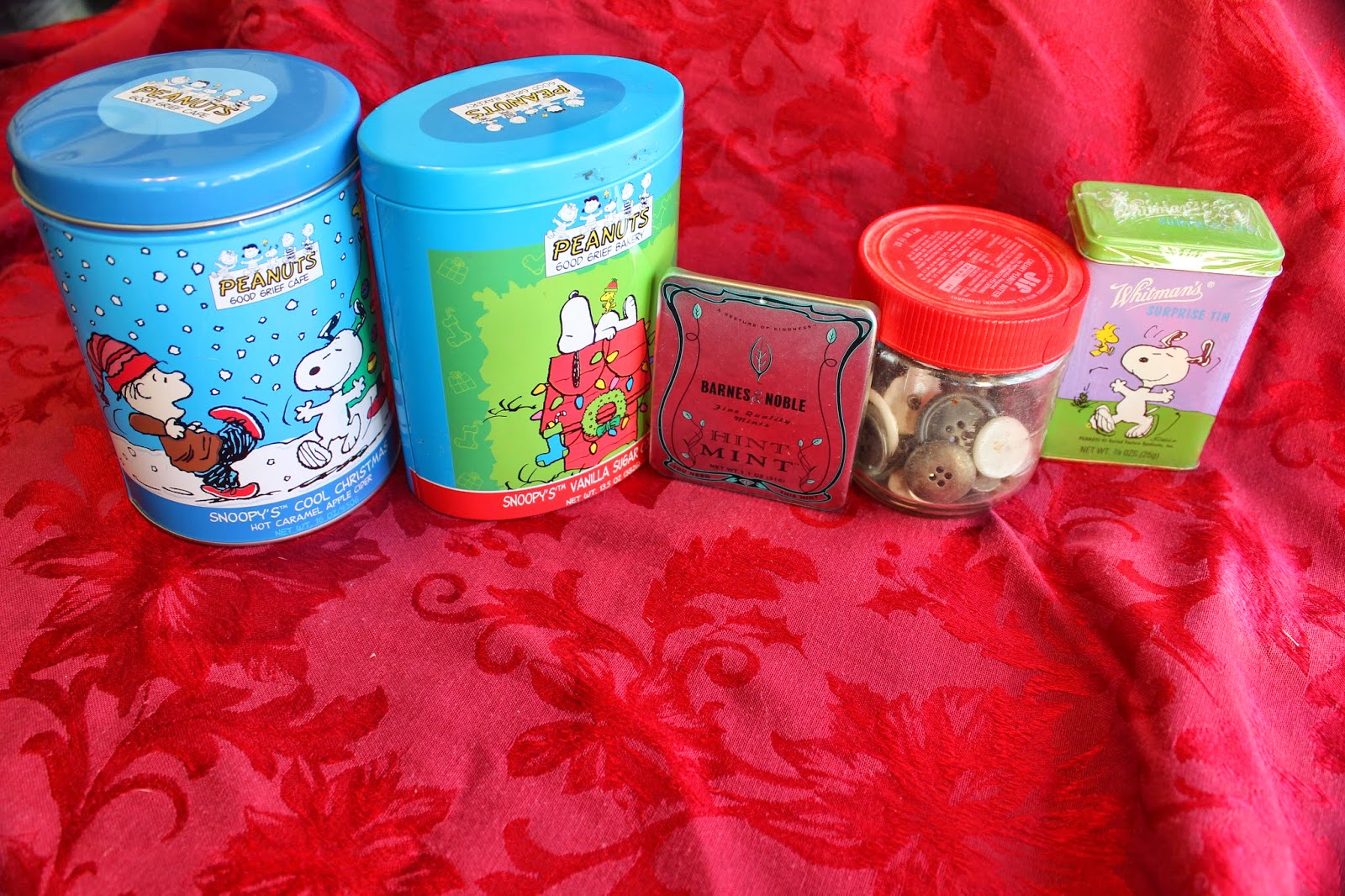 I'll probably sell this Snoopy tin and Chablis bought the Altoids tin because of Curious George on the front.  How cute is that??  She also took the Columbia tin because we are big fans of Columbia clothes.. 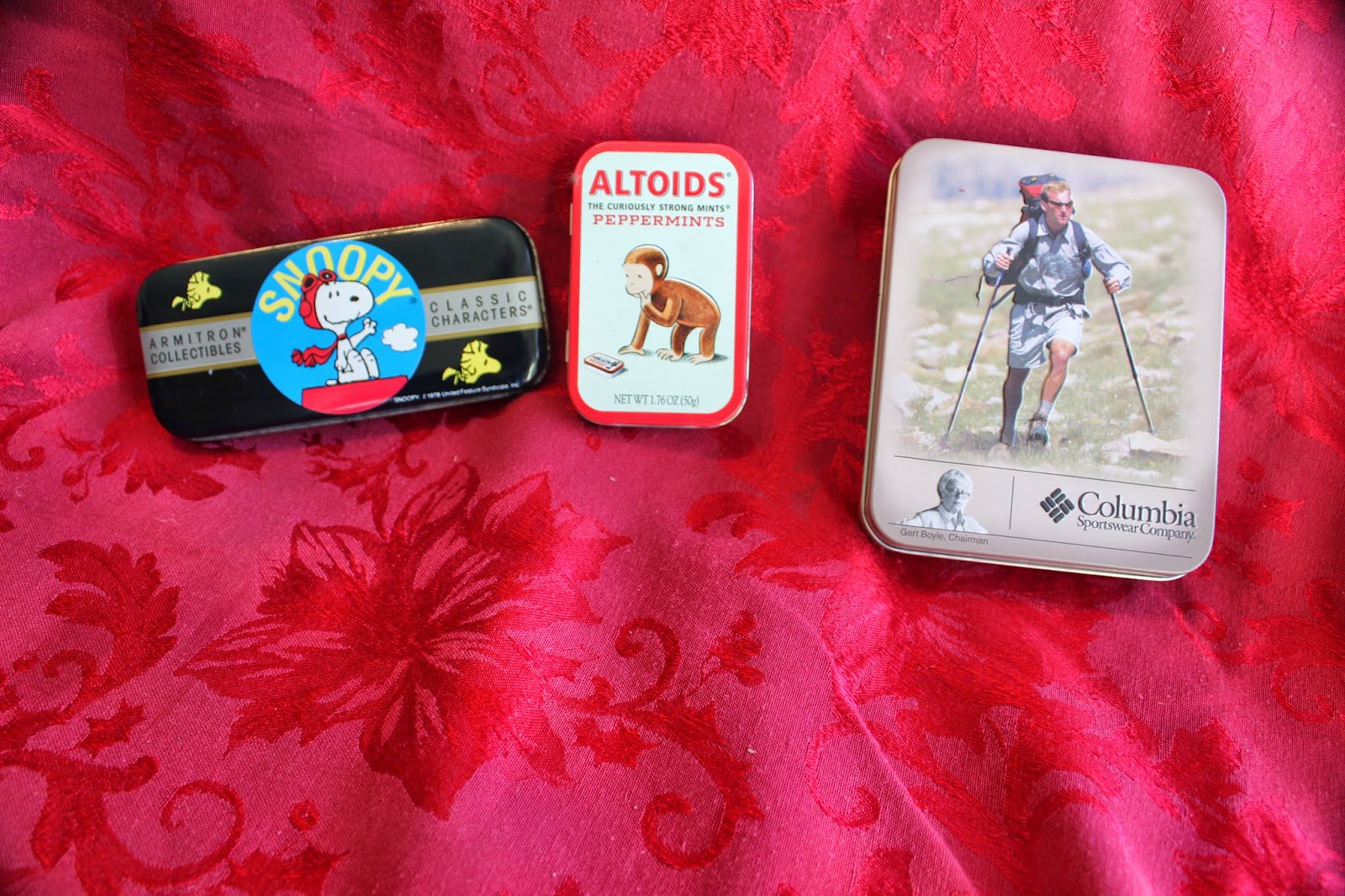 This New Era potato chip tin is a little banged up, but the price was right.  I don't know yet if I'll list it or keep it.  Louie wants me to sell it but the hoarder in me wants to keep it.... 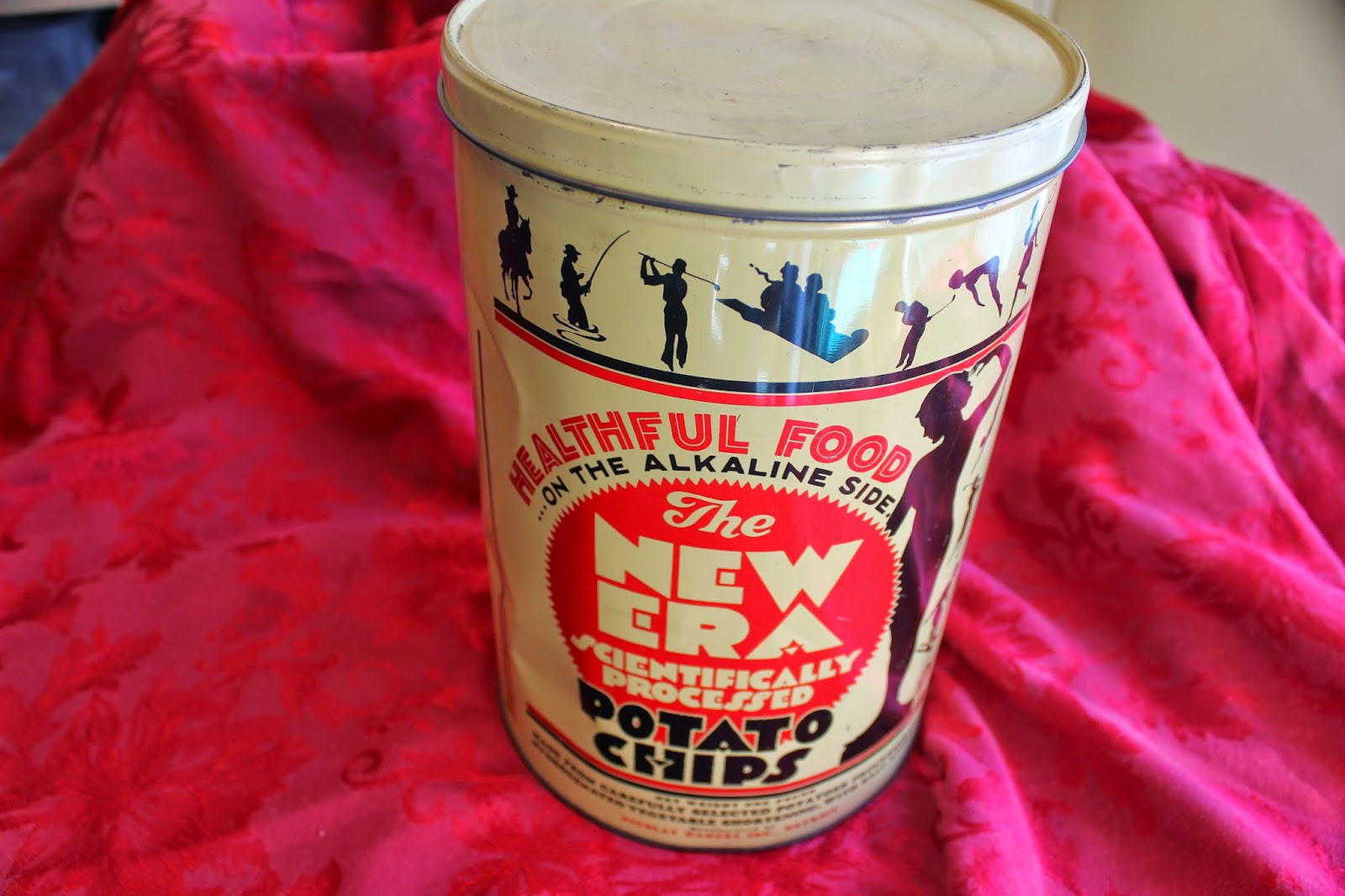 I picked up a bunch of Snoopy glasses to re-sell.  I chipped one on the lip when I was washing it so it looks like I'll be keeping that one.  These are from 1965 and 1968 and the colors are still really good. 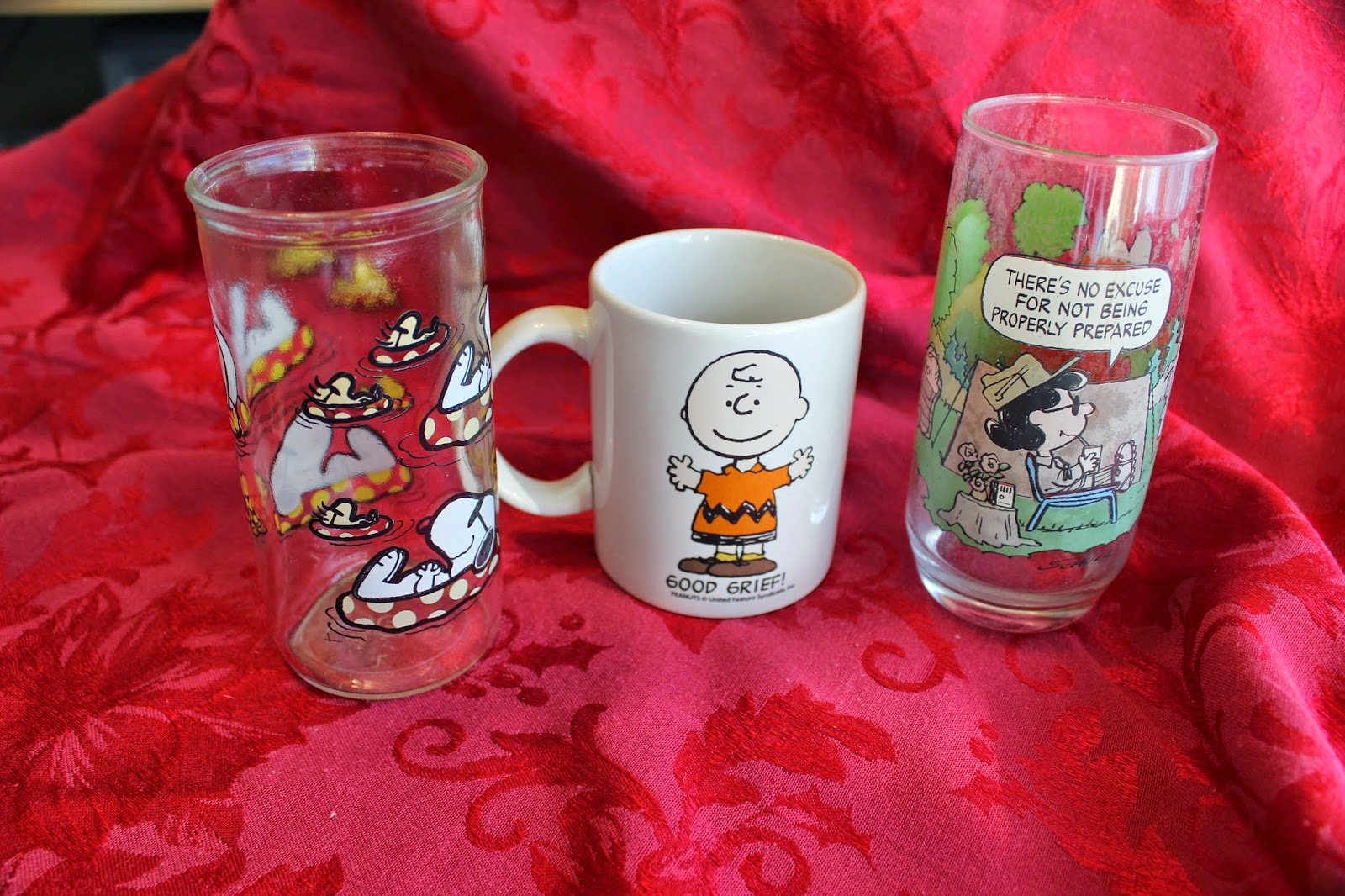 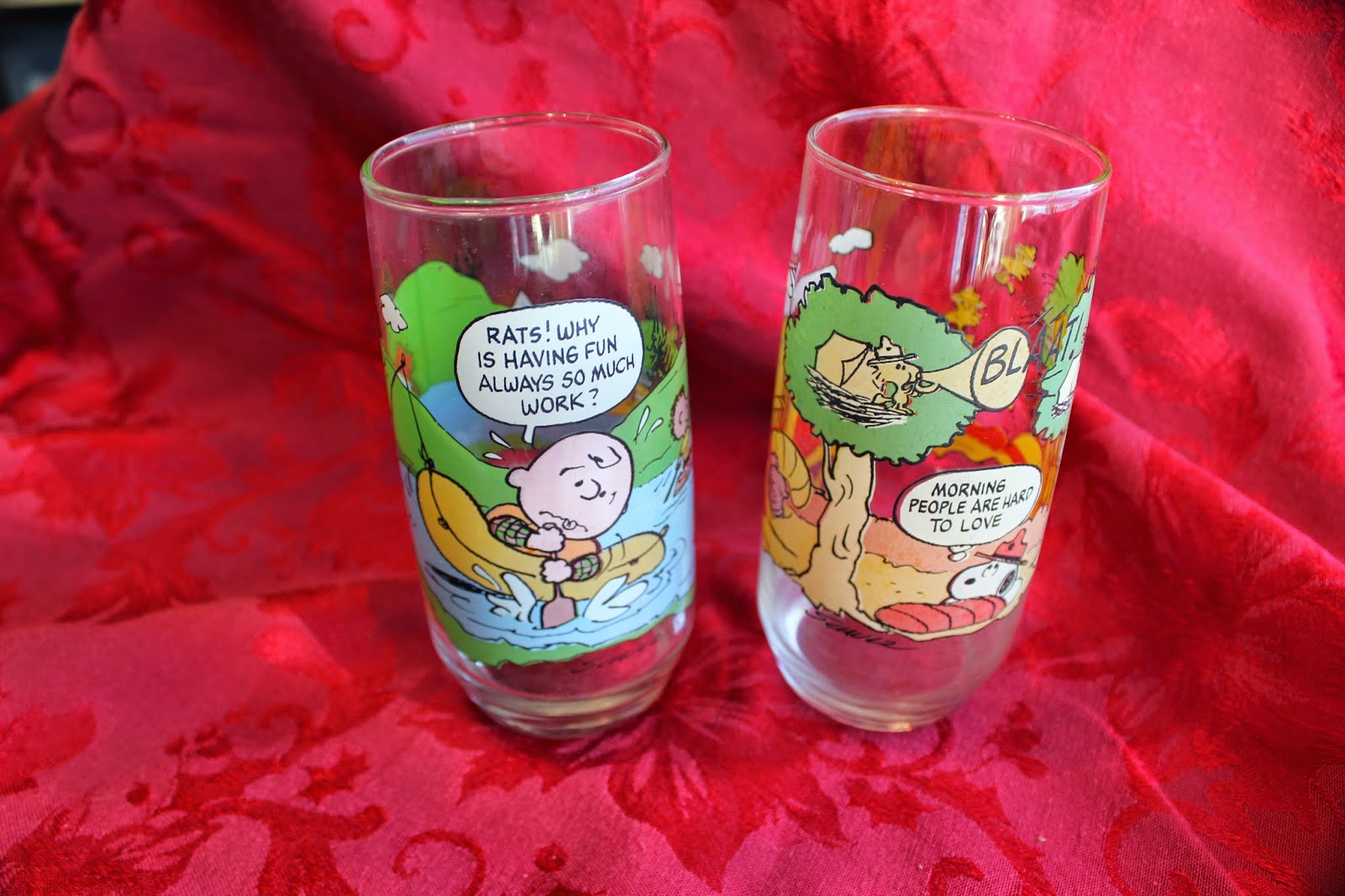 My favorite Snoopy find was the Joe Cool doll even tho he's a little yellow.  I'm holding onto him! 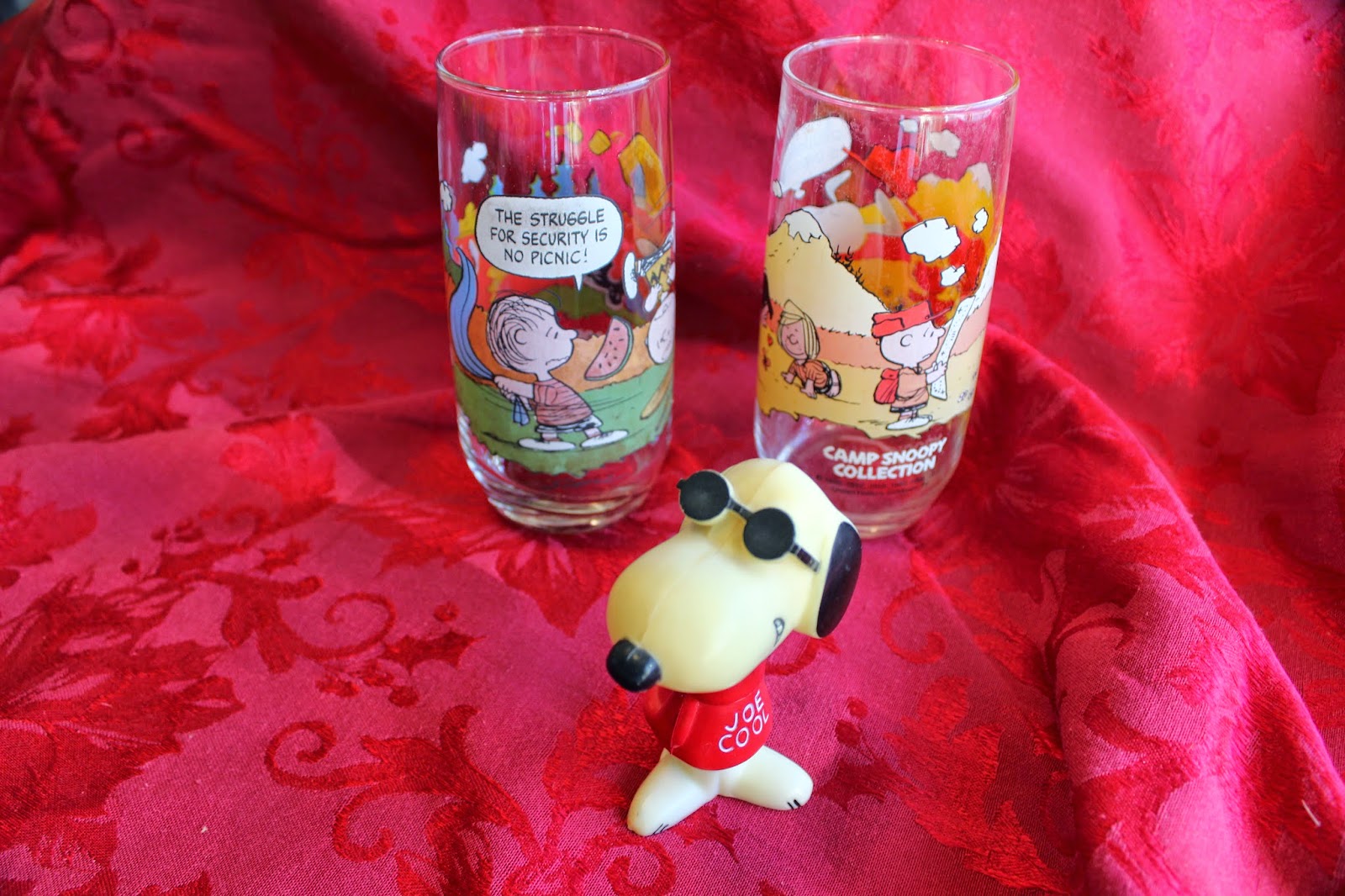 I went to one sale where they had boxes of yarn but they were so out in left field on their prices.  They wanted $ 5.00 each for the skeins of yarn.  Are they crazy???   I talked her down to $ 1.00 each for these 2 because I loved the colors and I bought the 2 rolling pins in the next photo as well.  The spool holds some nice cording for crafting or wrapping gifts.... 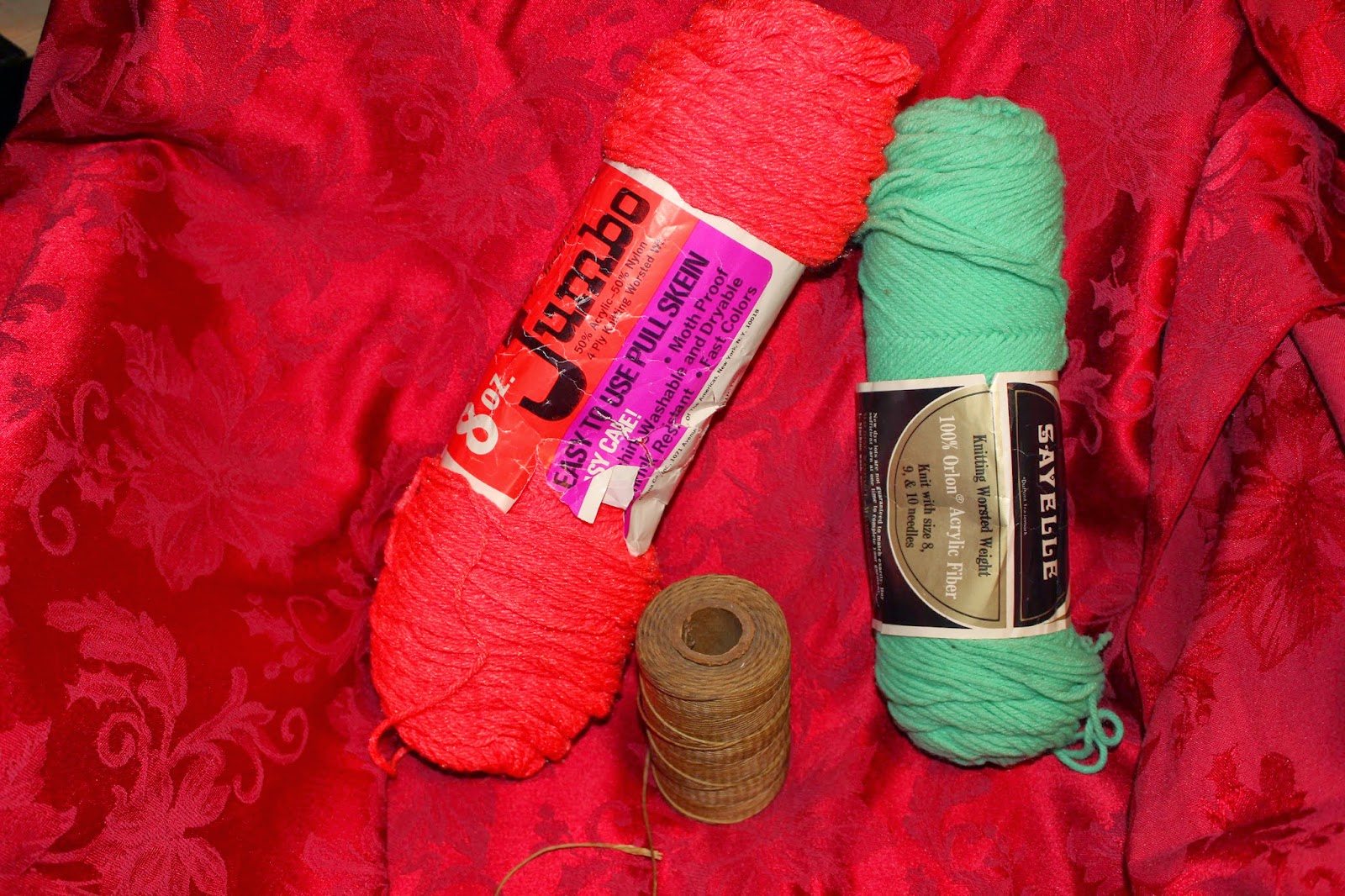 I'm a sucker for red handled rolling pins and this was the first glass rolling pin I've come across.   It has a wonderfully rusty end cap on it.  I wondered about the history of glass rolling pins so I did a little research.  It turns out that the glass ones were sort of "Sailor's Charms" and sailors would give them to women they were wooing.  Isn't that a great old fashioned word??  The glass pins were often filled with salt, vinegar, or cocoa.  The glass rolling pins could also be filled with cold water or crushed ice to help prevent dough from sticking to the pin. I think they would look awesome as a decorator piece filled with marbles, shells, sand, or herbs.  Even a black and white photo slipped inside would look cool.   If you want to read more about the history of rolling pins, click this link. 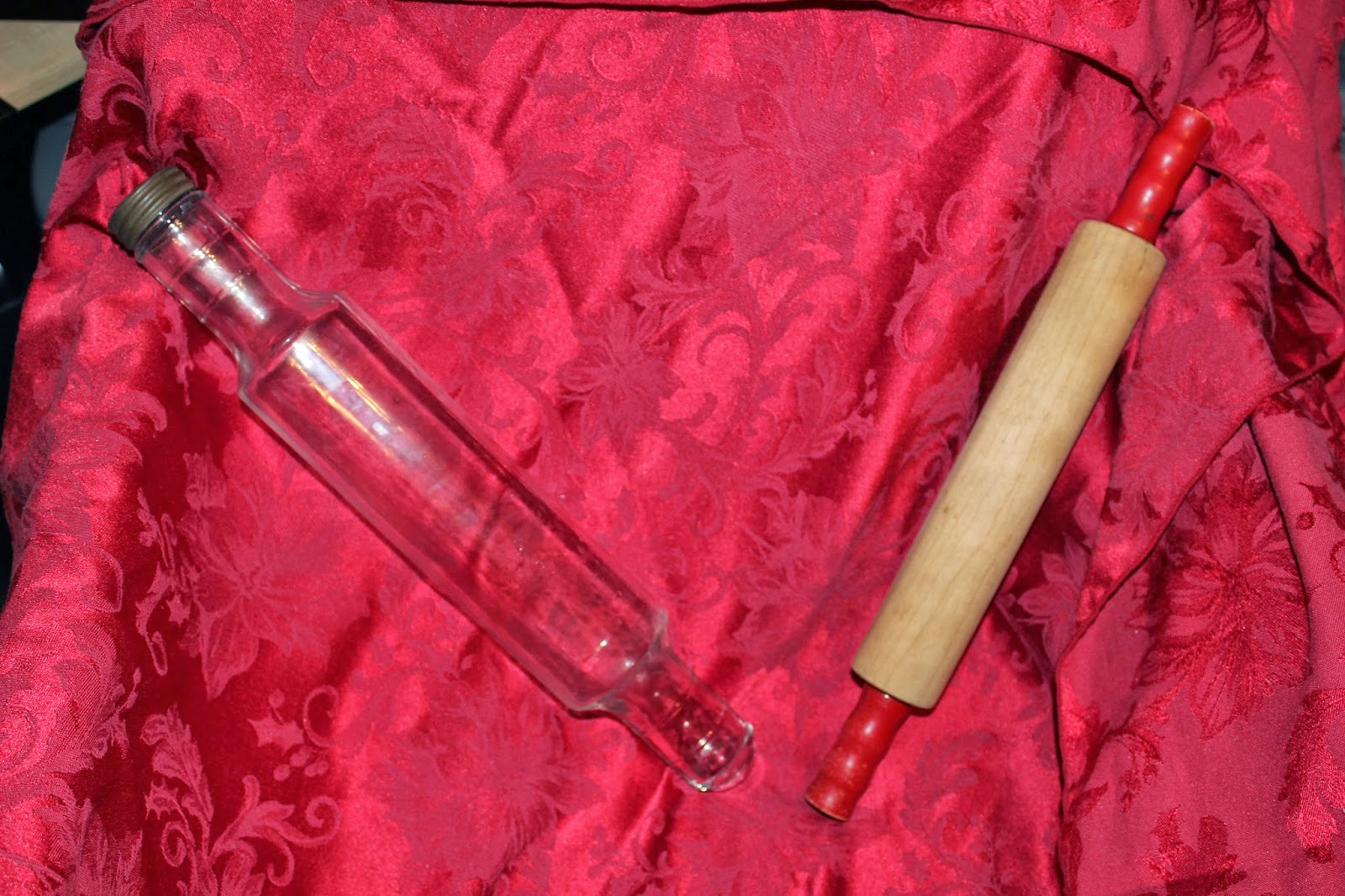 A handful of buttons.... 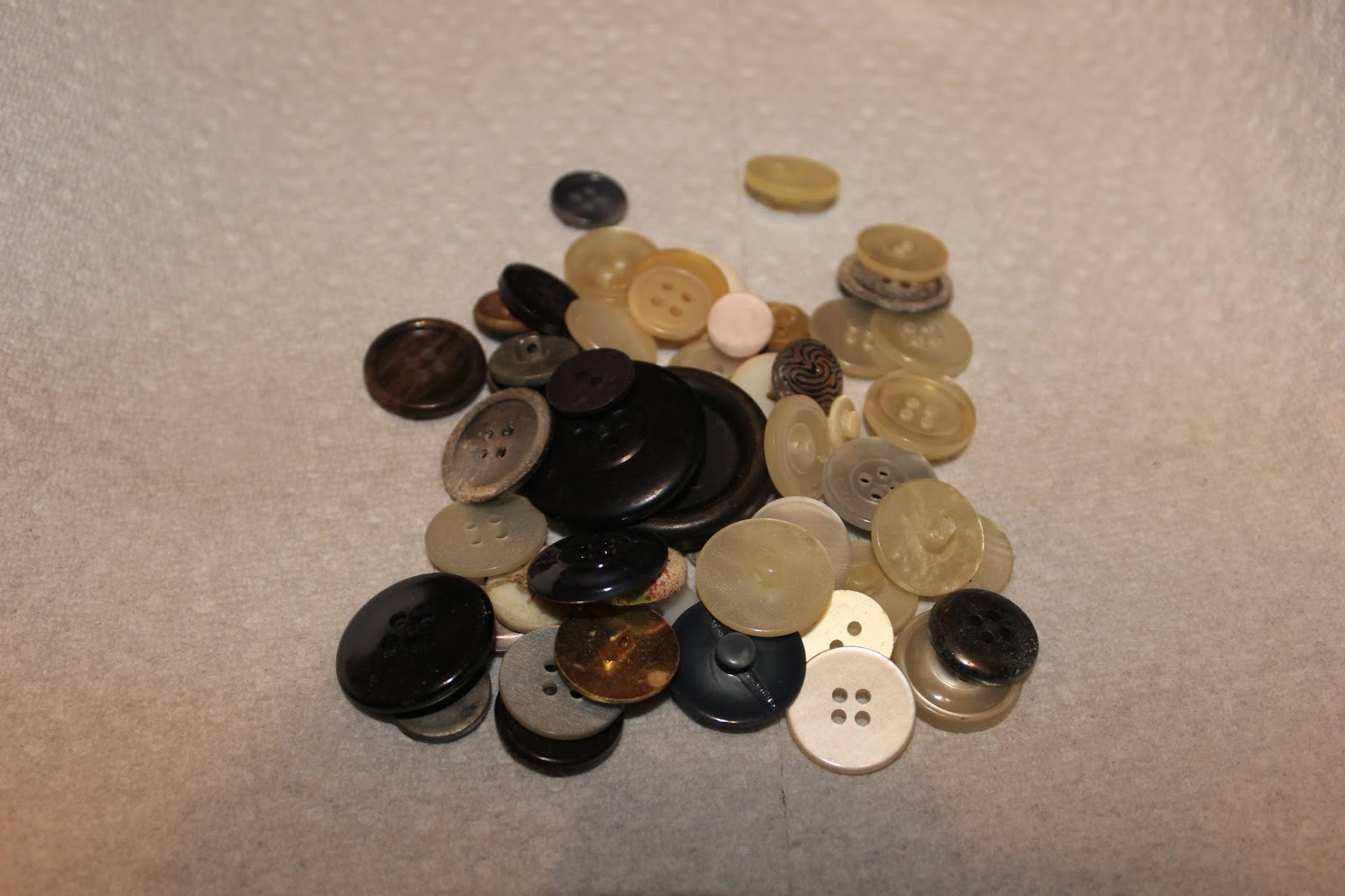 And my favorite find for the weekend....  Actually, Louie found it.  It's a womans suede  jacket and it looks brand new.  I don't know that it was ever worn.  It's just beautiful and I'm tempted to keep it since it fits me, but I'll probably sell it.  I already have a light brown thigh length suede so I really don't need another one.... 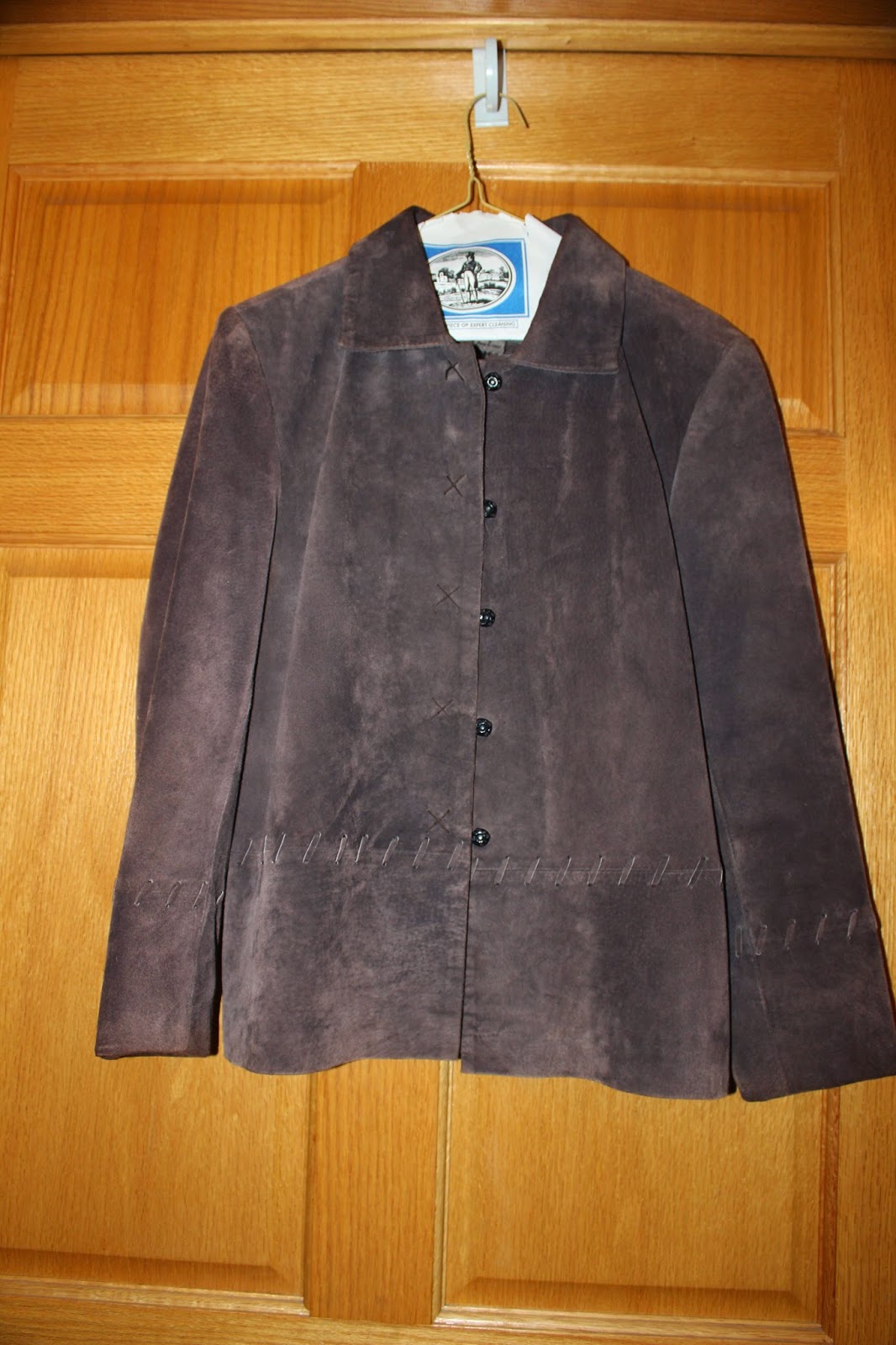 And that's it for this weekend..  What did you find??