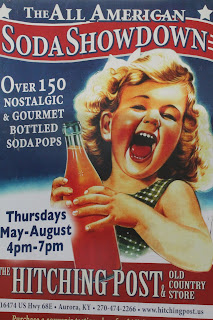 I hope you didn't miss my post 2 weeks ago about the "All American Soda Showdown."  If you did, then jump back here to read about it first and then come back.

Last week we had a different group of family members visiting us at the lake, and when I told them about the Soda Showdown, they asked insisted that I take them to Aurora to participate in it themselves.  Believe me when I say that they didn't have to twist my arm too far.  All anyone has to do is mention black cherry soda and sea salt caramel fudge and my butt is sitting in the drivers seat.

4:00 pm sharp had us at the front door where we were warmly greeted by Hitching Post owner Su.  Crossing the threshold of the Hitching Post is like taking a step back in time to an era where the shop owners knew their customers and took the time to sit and chat a spell. 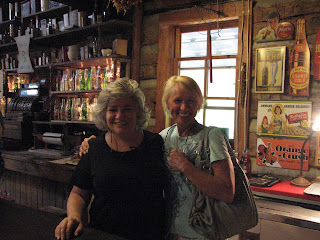 Since it was the 4th of July holiday, Su chose to go with a patriotic theme of red, white and blue sodas.  Check out the tub filled with the first 10 selections, chilling on ice.  Remember, for $ 4.95 you get to taste 20 different sodas and you get to keep the decorative shot glass to take home with you. 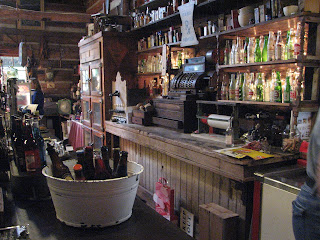 Miss Tracy told me that it was ok to call her a soda jerk, but she's entirely too sweet to go by that name.  We decided on Miss Carbonation instead, although soda aficionado would accurately describe her as well. 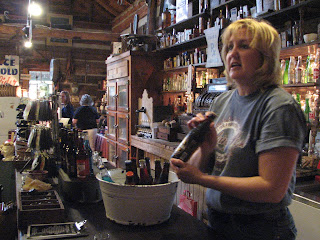 We lined up at the bar counter, and waited patiently for our session of the testing to begin.... 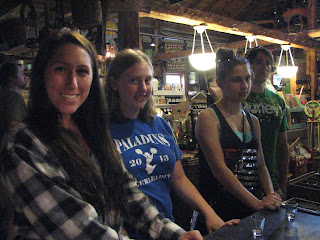 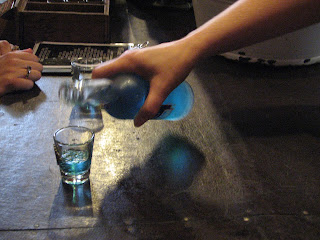 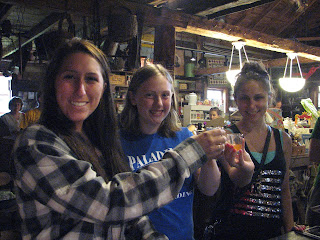 Tracy joined me in a friendly shot..... 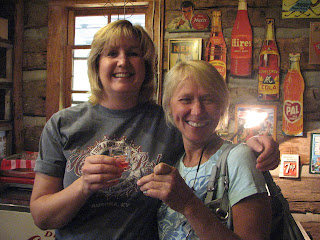 ...and then sent us down to the other end of the counter to Miss Susan, who was waiting with the next 10 samples.  I really enjoy the historical background of the different sodas and Susan knew lots of interesting things.  These girls know their stuff!  We had a fun discussion about Virginia Dare soda.  Has anyone out there ever had Virginia Dare soda? 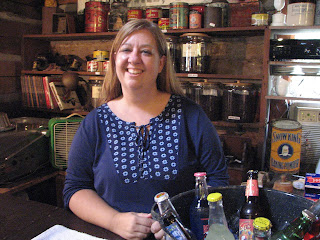 Check out the array of bottle caps.... 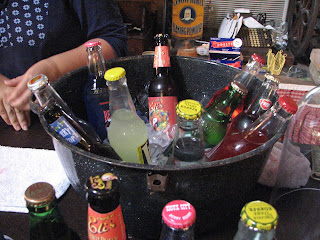 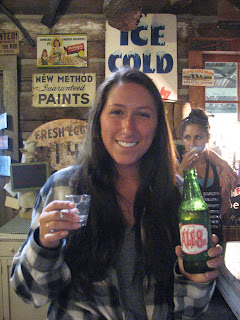 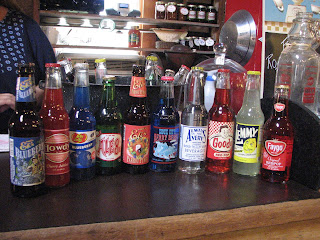 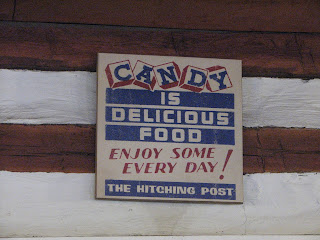 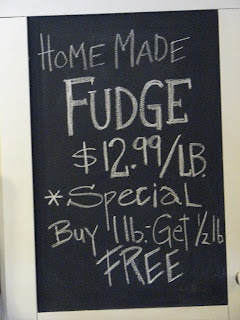 If you want to know anything about fudge, be sure to see Miss Dianne.   She clearly loves her job and enjoys chatting with her customers. 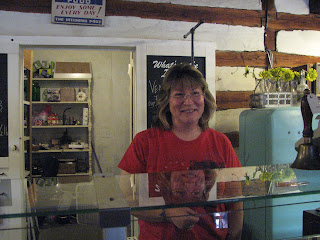 Look at me trying to narrow down my fudge choices.   There was a gentleman in line ahead of me who couldn't make up his mind as to which piece of fudge he wanted.  I am not ashamed to say that I would have kicked him in the shin if that pointing finger of his would have wavered anywhere near the small chunk of sea salt caramel that remained in the display case.  Lucky for him that he chose a different flavor and he left with his fudge in hand and his shin intact. 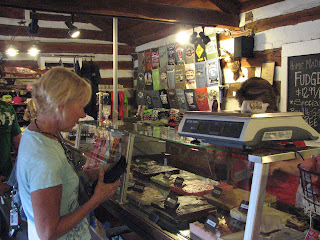 I selfishly took the last piece of sea salt caramel as well as a few others and we were on our way home where we did our own fudge tasting.  This is all that remains of the sea salt caramel, cherries jubilee, peanut butter and heath bar flavors.  Ssshhhhh......these tiny pieces are back in the box and stuffed behind a bag of lettuce in the crisper to be eaten by me and me alone when nobody else is around! 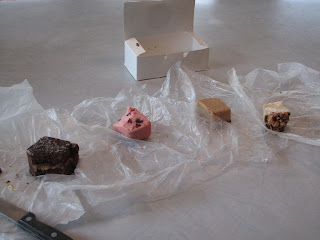 In case you were wondering, of course we also brought home a wide variety of sodas.  Want to see what we picked this time?  First you have to grab a cute carton.... 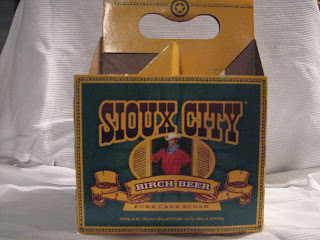 Dang wins for the best soda name.  I just love saying it!  Dang!!  I happened to look at the bottom of the carton and found out that Dang is part of the Imperial Flavors Beverage Company.  They also sell shirts, caps, jackets and assorted merchandise with the Dang logo.  Like their logo proclaims "Dang that's good!" 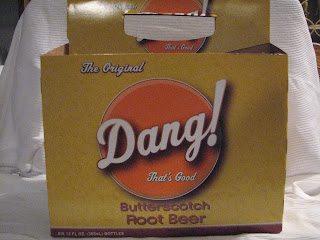 Then we loaded the cartons with different flavors.  I just love all the designs and some of the sodas have the cutest caps.  They are all so colorful.  I also get such a kick out of some of the great advertising slogans on the labels.  Triple Cola says "Drink it for vim and vigor" and Lucky club soda encourages you to "Drink guilt free." 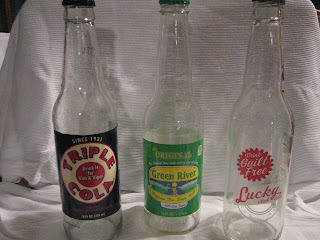 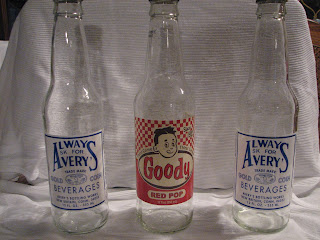 Lemmy brand is the original sparkling lemonade drink and tells you to say "Lemme have a Lemmy."  The Cheerwine brand gets my vote for best bottle shape.  It has that old fashioned feel to it. 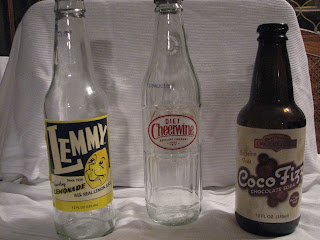 And then there is the Americana brand.  I tasted their cherry cola flavor for the first time and thought it was really good, but my  heart still belongs to the black cherry.  I stashed a bottle in the back of the refrigerator and today my husband pulled it out and asked if we could share it for lunch.  How rude is that??  Of course I did share it with him.  Wow - What some people will sacrifice in the name of love. 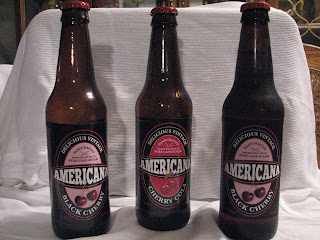 Soda Showdowns will continue throughout the fall at The Hitching Post and Old Country Store, so if you're anywhere near Aurora, Kentucky be sure to stop by.  The showdowns take place on Thursdays only, so plan accordingly.  Here's their website if you'd like some additional information.
Posted by Kim@Snug Harbor at 12:00 AM