I'm not referring to the record breaking heat waves we've had this summer.  I'm talking about my favorite album of all time - Neil Diamond's "Hot August Night." 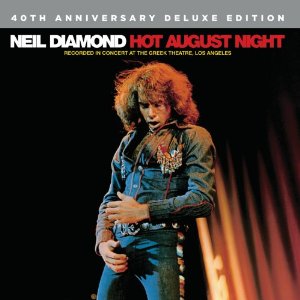 I first became aware of who Neil Diamond was in December of 1969 I believe.  I was home watching the David Steinberg show one evening.  He introduced Neil, who then sang his song "Holly Holy."  I sat on the sofa, transfixed.  It was the first time in my life where a song truly impacted me and I realized the power of music.  By the time he was finished singing, tears were running down my cheeks and I knew that this man was something special.  That Sunday morning when I was in church I took one of the note pencils and scribbled 4 words on the back of my program - Neil Diamond, Holly Holy.  I passed it across the pew to my grandmother and whispered "I want this record for Christmas."  I got it too!

Starting in 1970, when I was a freshmen in high school, Neil Diamond and his music were the backdrop to my teenage years.  Hits like "Cherry Cherry,"  "Sweet Caroline"  and "Solitary Man" blasted out of my transistor radio.  I remember walking to school and singing "Cracklin' Rosie" with my girlfriends.

Neil Diamond has an impressive career as a singer/songwriter that has spanned over 40 years.  Personally, I think he's a poet who does an excellent job of translating it to music.  It's just a bonus that he also has the singing talent and showmanship to back it up.  His songs are introspective and showcase his sensitive side.  He's not afraid to write what he feels.  It would be a real treat to sit and watch the man compose a song.  I can't imagine how he does it and the process must be fascinating.

His Hot August Night album was recorded in August of 1972 at the Greek Theater in Los Angeles while he was there performing a ten night stand of sold out shows.  He has his own unique style of music that I like to call  "Symphonic Rock." He has a great love of string instruments and began his show with 3 minutes of pure, sweet instrumental music before the guitars and drums joined in and then he launched into "Crunchy Granola Suite."  I can only imagine that the audience must have exploded when he hit center stage.

I've seen Neil Diamond in concert and it's truly a memorable experience.  He's so genuine and exuberant and displays moments of vulnerability that allow you to see into the soul of the man.  He really sings each song from the heart.  And when he sings, he moves easily from soft love songs to rousing rock tunes that showcase that unusual catch in his voice and his gravel growl.  He seems to enjoy being on stage and performing for his audience.

I first purchased the vinyl LP of Hot August Night when it came out and that album was the main reason I invested my hard earned waitress money in a decent sound system for my bedroom.  I spent hours laying on my bed listening to Neil.  Later, when cassettes came out, I bought the cassette version so I could carry Neil with me in my car.  When I heard that the 40th anniversary edition of the ground breaking album was being released this year, I put it on my Amazon wish list and had it shipped out the day it was released.  I listened to the entire album, twice, within 12 hours of receiving it.

The new edition album is excellent.  The sound is so crystal clear and as he sings, the background is so quiet you can hear a pin drop.  In addition to all the classics that were on the original album, this anniversary edition contains 3 previously unreleased recordings and clips of musician intros.  That's 26 wonderful Neil Diamond songs.

This album contains my favorite version of Sweet Caroline.  Holly Holy can still bring me to tears and when he performs And the Grass Won't Pay No Mind, I find myself leaning in, paying close attention to the words.  Neil has a way of drawing you in and when he sings certain songs I believe it transports him to another place and time.  I think the best song he ever wrote is "I Am, I Said."  He bares his soul in that song and I will never get tired of listening to it.  If you're a Neil Diamond fan, then this Cd is a real treat.  If you're not a Neil Diamond fan - give him listen.

Thank you Neil for writing beautiful music.  I really enjoy what you do!


Lightload Towel Giveaway Winners!
(chosen using the Random Number Generator)
17 Gayle
4 Lavender Dreams
16 GPC
1 Dave
Please email me your addresses so I can mail them out this week.  Thanks again to Lightload Towels for sponsoring the giveaway!
This CD review was written only because I enjoy Neil Diamond and his music.  I received no compensation for writing this review and all opinions are my own.
Posted by Kim@Snug Harbor at 1:21 AM