We have been working our butts off the past couple of days, trying to get everything cleaned up from the flood.  We had tons of debris and logs that floated up onto our property and it all had to be gathered up, piled and burned... 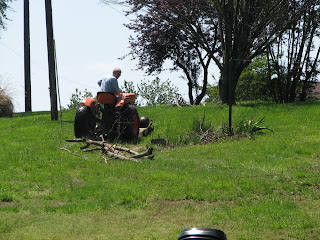 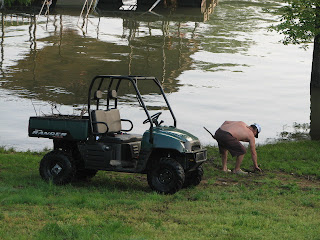 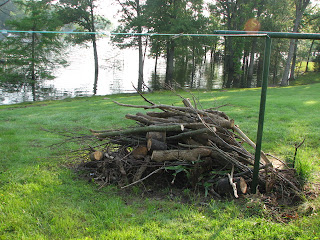 We also patched some cement on our walkway and our patio. 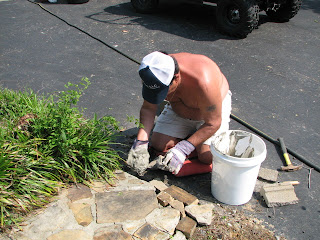 We put up our summer gazebo and hung my dad’s hammock between the trees.  Plus, I finally finished painting the downstairs guestroom.  All this in addition to fishing every single chance we got.  So it has been a busy and productive couple of days. 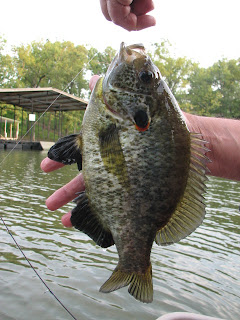 Today it hit 90 degrees, so I threw on my bathing suit and went and sat on my deck, while my husband took a much deserved nap.  A new family recently moved in across the bay and they have 4 little kids.  I spent an hour and a half enjoying the sights and sounds of those kids experiencing the lake.  On Saturday the four of them walked down to the lake, pointed at stuff and then ran back up to the house.  Sunday was more of the same.  By Monday afternoon, the oldest boy was wading knee deep in the water and after about an hour, the other 3 worked up the nerve to join him.  Finally he dunked under the cold water and then dashed back up to the house, screaming all the way “I did it!”  Right then I nicknamed him “joyful.”  He is clearly the loudest of the bunch, and maybe the most adventurous.  Today the dad is down there and the 5 of them are swimming around, grabbing onto rafts and floats and shrieking happily.  They are having so much fun.  It made me start thinking about the first year that we brought our kids down here.
We had purchased a really crappy pop up camper from a guy we knew.  I mean, it was shit, but it was all we could afford.  It didn’t even have a bath room in it and my daughter had to pee in a 5 gallon bucket in the middle of the night.  The canvas wall on one side of the bed was ripped and my daughter rolled out of bed and onto the grass in the middle of the night, which resulted in Louie taping up the hole with duct tape at 3 in the morning while I was swearing at him for buying such a piece of crap.
But that rolling piece of shit on wheels was worth every dime when I watched my kids swing out over the lake on a yellow piece of cord that dangled from a tree limb, or when they played for hours on end with minnows in a bucket, or took the net and went hunting for baby turtles along the pier.  Once they actually caught one and played with it for an hour before releasing it back into the wild.  And is there anything as cute as a 2 year old who has ripped off his diaper and is careening up and down the beach bare-assed naked, while he screams with utter joy?  If there is, well, I don’t know what it could possibly be.  I’d post a picture of it but that now 18 year old would die of embarrassment and probably never forgive me.
Anyway, I sat there on my deck today and watched this happy family.  I actually got choked up thinking about my kids and the fun times we have had around this lake over the past 16 years.  I would have given my right arm to have my 2 kids sitting there just then.  Suddenly I needed a mom hug – really badly!  I went into the house so I could type this up and share it with you while it was still fresh in my mind.  And I’m not too ashamed to say that the tears are running down my cheeks right now.  I can only hope that the young family across the bay enjoys their lake house and the memories it is going to make, as much as we have.  This lake house has been a blessing and a joy.  It is my forever Snug Harbor! 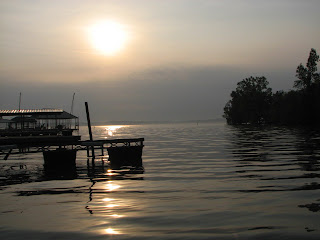