Book Review - The Family of Hummingbirds: The Complete Prints by John Gould

The Family of Hummingbirds: The Complete Prints by John Gould by Joel Oppenheimer and Laura Oppenheimer, Rizzoli Electra, 2018 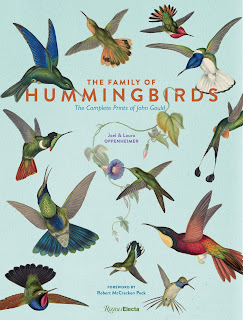 This stunning hardcover edition has 304 pages with 450 color illustrations and brings together all 418 species that were known to exist when John Gould captured them on paper in 1849.  The collection depicts these darling birds along with botanicals native to their habitats.  This master work of natural history took John Gould years to complete. 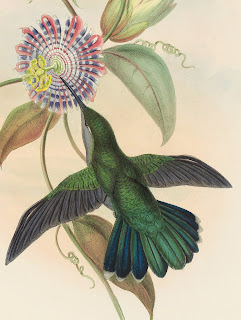 Part one, written by Laura Oppenheimer, covers A Passion for Birds: The Life and Legacy of John Gould.  This chapter chronicles Gould's life starting with his apprenticeship as a Gardner and his passion for birds at an early age. 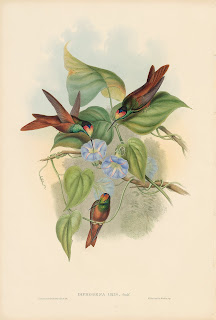 Beginning as an apprentice gardener at the age of fourteen, he later took up taxidermy and set up his own shop in London.  In 1829 he famously stuffed King George IV'S pet giraffe, an act that lead to his name appearing in print for the first time.  Several species of his growing collection of hummingbird specimens were exhibited at the Society in 1830.  By 1833 he was the superintendent of the ornithology department of the Zoological Museum which gained him access to exotic bird specimens and a superb network of naturalists. 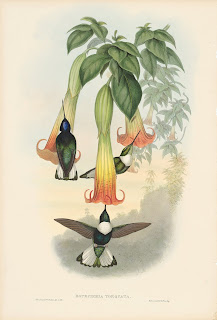 Throughout his lifetime Gould published many volumes dedicated to birds.   He traveled extensively with his wife, who was an artist in her own right, and she contributed a great deal to his publications by providing the lithographs to many of the illustrations. 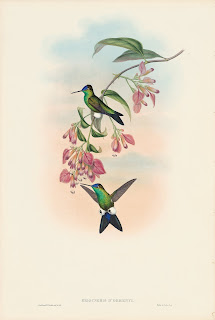 On a personal level, the hummingbird was closest to Gould's heart.  Gould sketched designs featuring one male and one female of each hummingbird species with a plant native to its habitat.  He made notes pertaining to color and size and then the finished drawings were transferred onto lithographic stone.  These resulted in 360 plates for the first five volumes on Hummingbirds.  Over his lifetime Gould created the definitive scientific reference on hummingbirds for his era.  His outstanding work has stood the test of time. 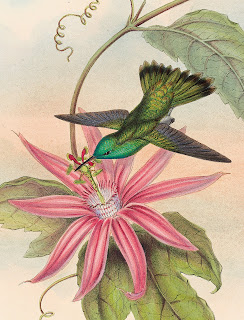 Part two covers The production and methods of creating The Family of Hummingbirds and was written by Joel Oppenheimer.  It's a fascinating presentation on the methods of transferring illustrations from metal plate to lithographic stone.  For The Family of Hummingbirds alone, including the supplemental additional prints, over one hundred thousand plates were produced over a 38 year period.  It's mind boggling to think about!  The coloring process itself was extensive, and once Gould hit upon the brilliant idea of adding gold leaf as an underlayment, then the true colors of the hummingbird exploded off the page. 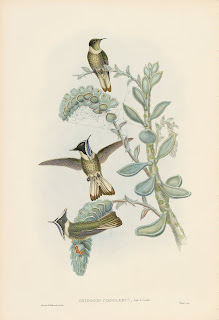 The crowning jewels of this book however are the prints themselves.  The colors are vivid and with the natural botanicals swaying in the background, it's quite easy to imagine the hummingbird in its native surroundings.  360 plates are featured as well as 58 supplemental plates.  Each print is a work of art in its own right.

The Family of Hummingbirds: The Complete Prints by John Gould  is many things -  It's a glimpse into the fascinating life of John Gould and the relentless passion he displayed to carry out this labor of love.  It's also a snapshot into a period of time that is long gone but quite important because of the scientific discoveries that were being made into the world of birds as well as the process of capturing their likeness in print.  And finally, its a book that you can hold in your hands and thumb through, enjoying again and again the illustrations of a delightful creature known quite simply as "the hummingbird."
As an Amazon Associate I earn from qualifying purchases..
Get your copy here

(I was given an advance copy of this book in exchange for an honest review.  All opinions are my own.  Photo images are the property of the publisher and cannot be reproduced without consent.)
Posted by Kim@Snug Harbor at 12:00 AM